Well, Attack on Titan season 3, part 2, episode IV, Golden Wind began and ended between the times I found to write something Japanator related. At this point, talking about it on the FP seems pretty dated, but that's why we blog and chat together as knuckleheads with terrible taste in anime.

So yeah, manga readers get vindicated as the anime finally adapts the long awaited mission statement from season 1: get to Eren's fucking basement. One more line break and line of bold text to back out of spoilers about one of Attack on Titan's cornerstone secrets and plot points, because everyone knows how King Crimson works now and Android 18 can have kids.

Last spoiler line before backing out

It's hard to believe there are anime watchers who didn't cave like me and just read the manga but there are people out there like that, like Woolie from Castle Super Beast. But number one cut after reading a journal kept in the basement going to a walled of ghetto below some flying airships and I sure hope you guys got a shock like a punch in the back of the head at that kind of revelation.

My sister is one of those purists actually, so I had a fun time explaining some of the finer details you can miss, and even I drew a lot of enjoyment since it had been a long time since I read these chapters. It's hard to believe we've finally arrived here after hearing about adaptations like a live action drama that had fucking APCs transporting Scouts. There's a real feeling of catharthis despite the ominous feelings Eren gives out. Finally, the people of the wall have reached the sea. They clawed their way out of the walls and reached the sea with a greater understanding of the world around them, and yet Eren reminds us all that the story isn't over as the enemies they've defeated along the way simply give way to more enemies across the ocean.

It's hard to believe the 4th season will be the last one because I feel like I've been reading the current arc of Attack on Titan for a few years now. I even acknowledge that the story feels like it's reaching the tipping point where the story is absolutely going to head for a conclusion but it's hard to believe we actually have an end in sight as opposed to continually churning this baby out for more. 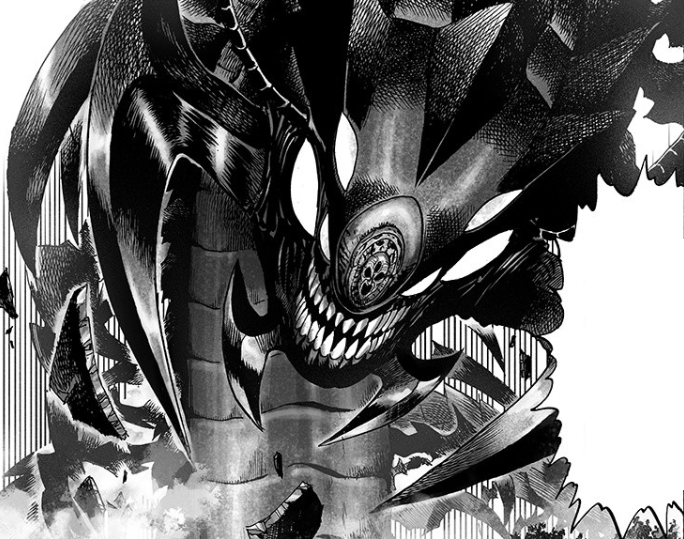 On the flip side, One Punch Man wrapped up season 2 on one of the more awkward finishes. Sure Saitama gets to unleash another serious punch on elder centipede but overall the end of a season like this feels pretty anti-climactic.

Of course, there's a certain meta-narrative saying of course it was unsatisfying, that's how Saitama feels all the time, and when I realized that myself, I told myself fuck you, that's dumb, stop thinking of dumb explanations.

I will admit, there were a few good moments where it felt like J.C. Staff really scrapped things together, but season 2 of OPM felt like an uneventful blur. I think the thing I hated most was the moment Garou took his bloody hands and rubbed it into his hair. In both the webcomic and manga adaptation, it felt like this important moment, hinging between Garou's humanity and his drive to become a monster. Even in static images, the illustration of Garou's white hair in black and white becoming dark with an obvious hint that it was blood red was drawn so well, I got chills just imagining that this character was forcibly evolving himself past his humanity.

Then I saw it actually animated and I just saw his hair wiggle around 3 frames before cutting back and forth an image of his white hair to a really lame, light reddish hue. For fuck's sake, his hair goes from blank white to ominously dark and shaded in a black and white manga, I was expecting it to turn crimson, blood red, and instead I got strawberry lemonade on Garou's hair, I felt more deflated than Saitama after his first punch back in episode one.

I tempered my expectations of season 2 and somehow still got dissappointed.

I didn't stay on Saranzanmai like I thought I was. After thinking about how haphazard it was to watch the first episode, I just focused on other series, like Hitoribocchi, Wizard's Grandchild, Fruits Basket, and following more JoJo and Demon's Blade.

Easily my favorite thing from Hitoribocchi was the alternate ED that was sung after a whole episode of WA HA HA. I sometimes want to go WA HA HA during my day because it feels like a good luck tic. And color me surprised Bocchi actually made three more friends!

Likewise for great singular moments was the reintroduction of one of Fruits Baskets' greatest gags, Haru proving his weird black and white hair is natural to the student council president. The implication being he fucking took his pants down to show him the carpet matched the drapes somehow.

And of course, Golden Wind is finally wrapping up as us JoJo fans prepare for JoJo sleep before David Productions recovers their vitality for the next arc. I almost can't believe how the schedule is being handled as it's couer expired officially for a new series, but it'll be quite the send off to see the finale of a JoJo in an extra long, hour finale in what'll probably be a devastating death for Diavolo. It's hard to believe the next arc will be Stone Ocean, complete with a character made entirely of zooplankton with a reference to a band that I actually listened to in high school.

So what were your thoughts on spring anime 2019?