This month's prompt for Band of Bloggers is To The Movies! The handsome LaTerry invited everyone to write a blog about a movie based on a game, or a game based on a movie. When I first learned of this, my plan was to watch the Assassin's Creed movie finally and review it. Well... I never got around to that. I still might do it someday. But it's not happening this month. I also thought about writing a review of Detective Pikachu, but that didn't really interest me (movie is fun and beautiful, FWIW). I then thought about licensed games I own. I thought of Aladdin on SNES, but I've written about that before. Then I had an apostrophe. Lightning had struck my brain.

As as kid, I played a great deal of Goof Troop on the SNES. It's actually a licensed game based upon a cartoon TV show. I don't recall ever having watched the show (if I did, I was too young to remember). Somehow or other my family obtained a copy of this on the Super Nintendo and I loved it. Awhile back, I got my hands on a Mini SNES Classic. I totally didn't hack it and put ROMs on it. Nope. Wouldn't have done that. And if I did, I certainly wouldn't have put Goof Troop on it. No way. Not me.

A few months ago, my wife and I played through Goof Troop together. For the first time in my life, I beat the game. I had reached the final boss many times, but never defeated him. But we did it! I remembered this yesterday and invited my wife to play through it with me again. And this game is great! It was developed back in the glory days of Capcom making Disney games. 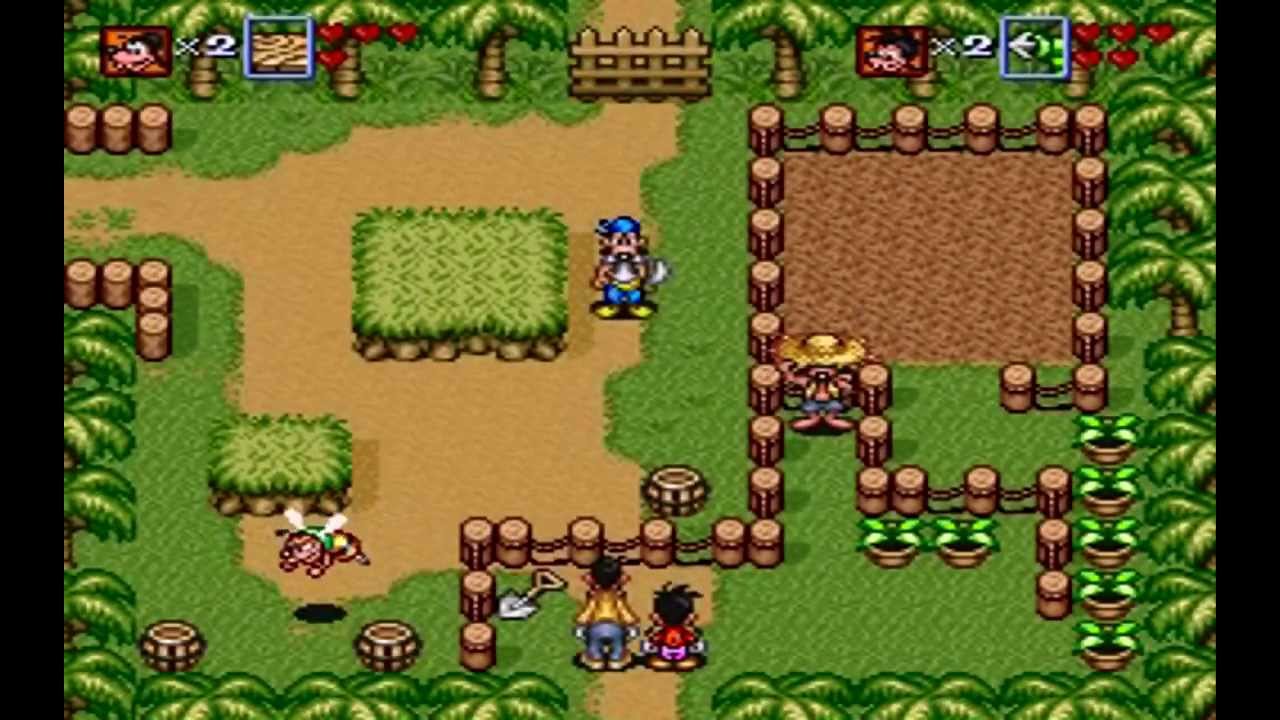 The gameplay is pretty simple. It's top-down 2D. You use the directional pad to move Goofy or Max around. You use B to pick up, drop, or throw objects. You press Y to use whatever item you have equipped. You move from one square screen to another. You solve puzzles (block or switch based). You have basic combat. You work your way through a dungeon and fight a boss. There are 5 dungeons in total. There is no overworld of any kind. It is all dungeon. I think that's a missed opportunity. It would have been great to explore the world and interact with NPCs. 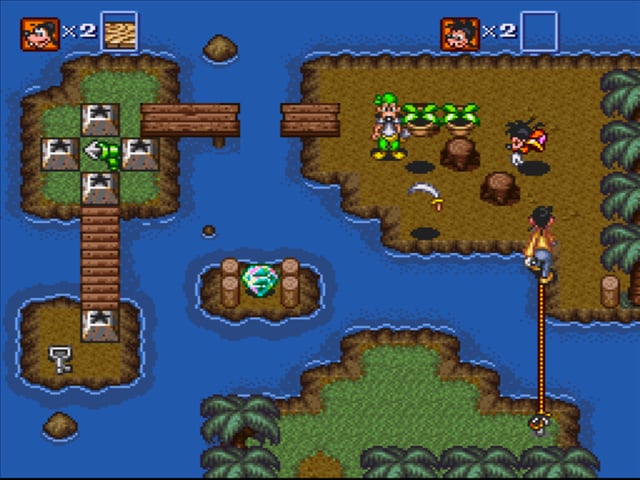 There are a handful of items you can use throughout the game. If playing one player, you can hold two items. If playing two player, each player can hold only one item. There is a hookshot that is useful for combat, grabbing items out of reach, and making bridges across gaps. There is a board that can be placed on a bridge. There are small keys and boss keys. There is a candle to light up the occasional dark room. The shovel can be used to dig in certain areas to find health and lives. The bell is a useful item that will draw enemies to you.

The health system is... odd. You have a limited number of lives, between 0 and 9. In addition to this, you have hearts (up to 6). If you are touched by an enemy or otherwise damaged, you lose 1 heart. If you have no hearts, you lose a life. When a life goes away, you don't get new hearts. Your hearts are still gone. So if you run out of hearts, you can find yourself burning through lives very quickly. The really strange thing is accruing health. You can obtain red gems which will give you an extra life. You can also get bananas or cherries which will grant you 2 or 1 hearts respectively. If you have 6 hearts and pick up another health item, your hearts disappear and transform into a new life. So it's actually more beneficial to have 6 hearts than it is to have a few extra lives. It's very strange.

Combat is pretty simple. You can pick up objects (barrels, pots, bombs, etc) and throw them at enemies. Goofy moves slower than Max does. But when Max throws an object at an enemy, he does only 1 damage. When Goofy throws an object, he does 2 damage. This creates an asymmetric co-op experience that is a blast. Max can outrun most enemies. He can run around, distract enemies, hit switches, solve puzzles, etc. Goofy, in the meantime, can focus on clearing out all the enemies in the room. I do find that Max is a better character for an inexperienced gamer.

Goofy and Max are both very well animated. It is priceless when you throw a barrel at your partner and leave their character stunned. It's so fun to grief your friend while they're trying to get an item or solve a puzzle. Never gets old!

There is a story to the game but I have literally never bothered to read the cutscenes to understand it. Suffice it to say that you're on a mysterious island fighting pirates. The pirates think Pete is their leader or something. Max and Goofy want to rescue Pete. 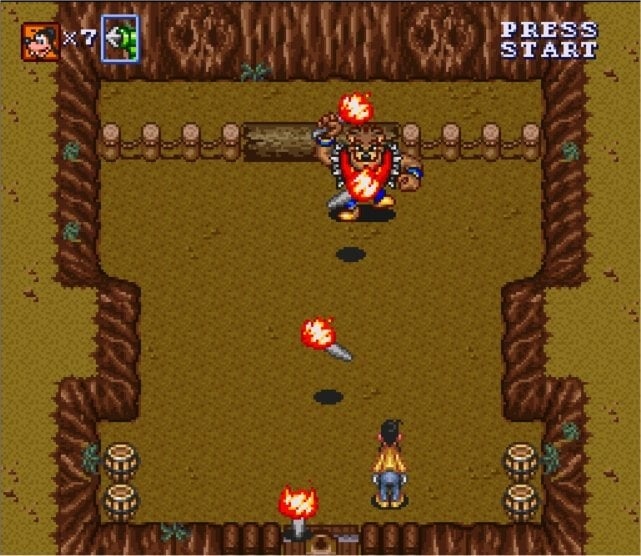 The 5 dungeons featured in the game are all visually and thematically distinct. They have excellent, atmospheric music. The bosses are all solid (though most are pushovers).

The game is not very long. It's only about 2 hours to play through. It's a great way to spend an evening with a friend, sibling, or significant other. It's an excellent entry-level game if your partner doesn't play many games. My wife has never played Zelda (and possibly never will). But she can totally handle Goof Troop. She can experience the fun of questing through a dungeon, solving puzzles, and defeating a boss. 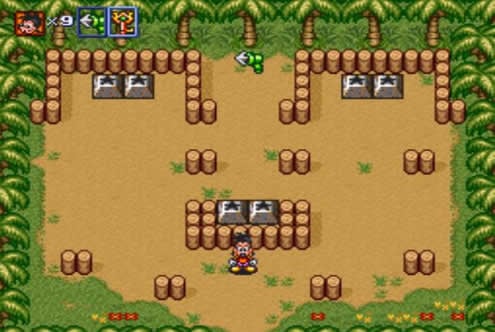 I would really love to see a studio make a modern take on this. Make a 2 player Zelda game. Have it be cooperative. Have each playable character complement each other's weaknesses. So much could be done with this idea. Someone please make it!

So there you have it folks. I replayed Goof Troop and I loved it. Have you ever played it? What do you think of it? What's your favorite co-op game to play with a non-gamer?