Samurai Shodown is one of those fighting games that needs no introduction to the fighting game scene, but at the same time doesn’t get much recognition that it deserves to the casual audience. It’s one of the games that I personally enjoy, but also I didn’t play much of because I didn’t know anyone in my area who played the series at the time. Since the latest entry is coming out on June 25, I’d figured it would be best to write a blog about learning how the game is played.

Brief History of the Series

Before I do any of that, let me give you guys some history on Samurai Shodown. The franchise has been around since 1993 for the arcades under the Neo Geo MVS system, and it was considered to be one of the first-ever 2D weapons-based fighting game in the genre. In Japan, it is known as Samurai Spirits.

The reason for the name change is because according to Yasushi Atachi (the original creator of the series), SNK’s US distributor told the team that the word “Spirits” doesn’t tell exactly what the game is about. The name was changed to Showdown, but it is spelled differently as a reference to the movie, “Shogun”.

Unlike other fighters like Fatal Fury, Art of Fighting, and other fighting games from the Neo Geo MVS lineup, SNK took a violent approach with SamSho by incorporating blood and fatalities in their game, similar to Mortal Kombat. The only key difference is while the MK series focused on the gory aspect of violence, SamSho puts an emphasis on the graceful aspect.

The series have received several sequels, movies and OVAs, Drama CDs in Japan, and side games. Some characters, like Haohmaru and Nakoruru for example, appeared in other games such as Capcom vs. SNK 2, Neo Geo Battle Coliseum, and The King of Fighters XIV.

Now that I got that out of the way, let’s talk about SamSho as a game. 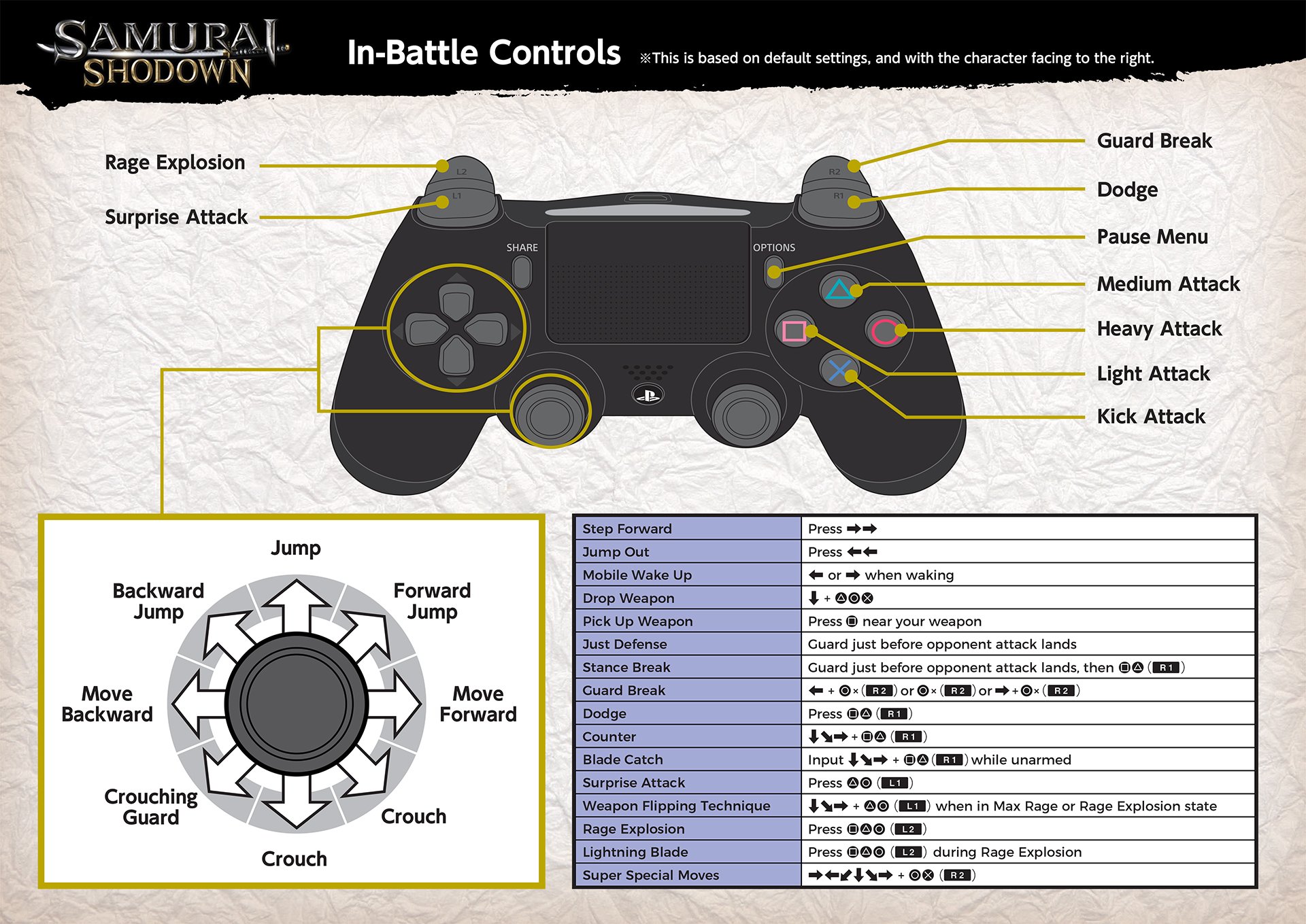 SamSho is played with a four button layout like many other SNK fighters. The default layout goes as follows: A=Weak Slash, B=Medium Slash, C=Heavy Slash, D=Kick. Some commands require two or three buttons to press.

For instance, pressing A+B allows you to dodge, whereas pressing A+B+C allows you to use the Rage Explosions, followed by an Issun attack while you are in that state. Parrying your sword can be done by QCF A+B

It's best to map the buttons to your preference whether you are on an arcade stick, pad, or hitbox. For an authentic experience, I’d recommend using the Neo Geo arcade layout if you are playing on a stick.

The Significance of SamSho

Many fighting games such as Street Fighter V, Dragon Ball FighterZ, and Blazblue Cross Tag Battle, for example, rely on flashy combos, links, and all that jazz. SamSho is the complete opposite of that since mainly focuses on zoning/spacing, footsies, and canceling normals into specials (or 2-in-1s).

If you are looking for a 2D fighter to do nasty combos, you won’t find it in this game. However, that doesn’t mean that it can be dull without combos because the meta for SamSho is ridiculous. This is a high-damaging fighting game that makes you think before you act.

If there one thing you need to watch out for while playing SamSho, it would be losing your weapon during the match. You can easily drop your weapon by the following situations…

Fighting with bare hands can be a pain to deal with, but that doesn't mean you are completely helpless. You can catch your opponent's weapon with a well-timed parry so that they can be disarmed as well.

When I was playing SamSho V Special, there are several things that you have to watch out for. This also applies to the new game as well because this isn’t your typical 2D fighter.

One thing you have to know about SamSho is that this game will punish players with bad habits. You can say that for other fighters, but this game is more relentless because of the high damage and the slow-paced nature of the matches. If you decide to mash a button out of panic, or no reason at all, then say goodbye to your health meter. Or even worse, if your opponent deflects your heavy slash, then you will be disarmed from your weapon, AND THAT WILL SUCK HARD.

Saving your meter is another thing that you have to watch out for as well. The Rage Gauge is this game’s Super Meter that allows you to use a WFT, Super Special Move, or a Rage Explosion. And speaking of Rage Explosions, be careful if you activate it early during a match because once you use it, your Rage Gauge will be gone and you won't be able to do your WFTs. My advice is to use them when you are at match point.

Lastly, pay close attention to the clock. The game runs for 60 seconds per round, but it has a faster than normal round clock. If you have the life lead, don't be afraid to run the clock. Let the opponent come to you.

How Can I Prepare for the New Game?

The most popular entries in the series are Samurai Shodown II and Samurai Shodown V Special, which are played to this day. I'd recommend playing VSP since it is easier to find matches with other people. Normally I'd recommend getting the PS4 version, but it's best to play it on Fightcade. I'd recommend using Fightcade 1 over the newer update because it's more active. Fightcade 2 is kinda wonky in regards to matchmaking.

Where Can I Find More SamSho Information?

Perry (@experimilk on Twitter) made an unofficial beginner's guide for the new SamSho game, covering the basic mechanics, certain character breakdowns, and much more. It also lets you know the pros and cons of each character

SonicSol made several video guides based on SamSho, from the basic mechanics to character guides. He also knows the lore behind the series as well. You can find him on YouTube, and he also has a Discord channel as well. Sonicsol is currently making a character guide for Galford, which should be up soon.

Where to Watch Samurai Shodown Tournaments

TRF, an arcade located in Nakano, is popular for their weekly VSP tournaments, along with beginner sessions for newcomers.

Kohatsu is another arcade that shows off SS1 and VSP tournaments. (Unrelated note: it's a great place to watch high-level Bloody Roar 3 matches. Highly recommended.)

Lastly, I'd recommend everyone to watch Combo Breaker 2019 this weekend. Samurai Shodown will be part of the lineup, and hopefully, you all get an idea on how the game is played. They will be using a new build that will feature Shiki as a playable character. 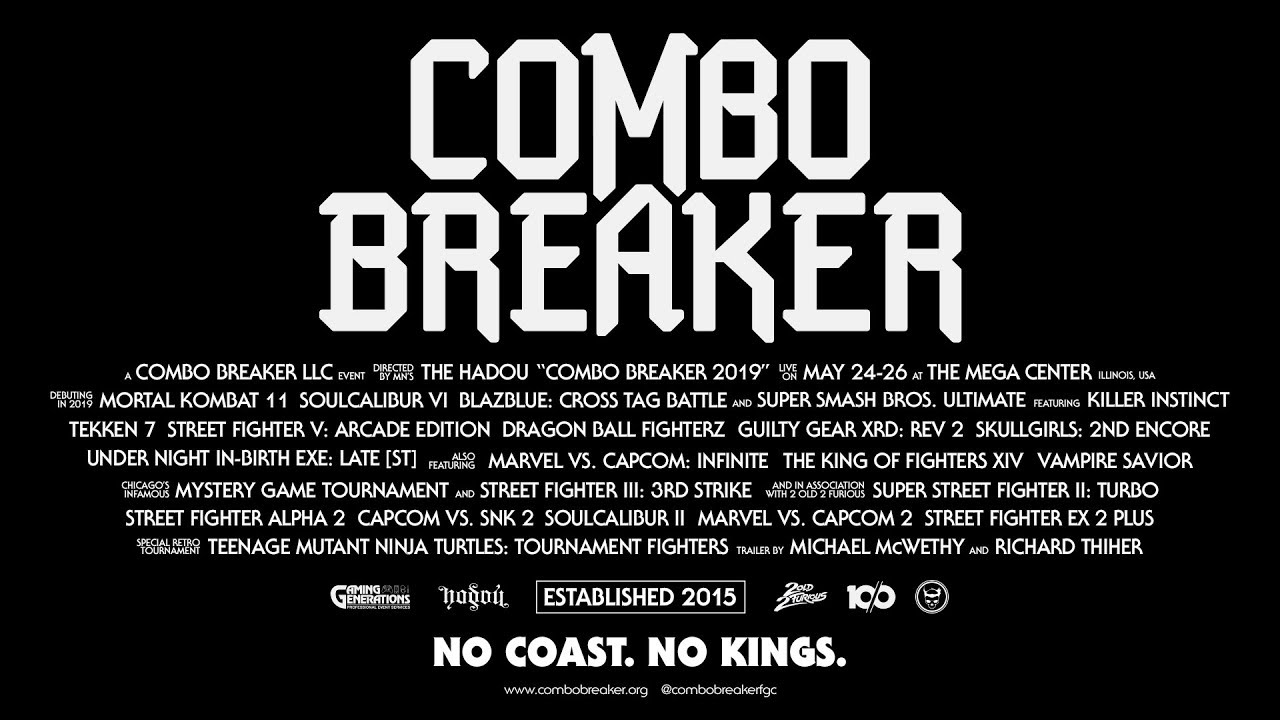