Resident Evil Revelations is the brilliant (and underrated) followup to RE4

Let it be known on the record that Resident Evil Revelations isn’t just some forgotten handheld spinoff, but is in fact a vital component of the Resident Evil series and one of the most important steps for restoring the series to its current glory.

It’s a shame the sequel sold so poorly, in part due to what I believe was a mishandling of both the game’s distribution model and its platform (it really should’ve stayed on the 3DS or Vita) because we may never see a Revelations title again.

But what made this game so special, and more importantly, why is it’s lineage connected to RE4 more than any of its other predecessors? Why is it really the followup that game deserved more than any of the other numbered sequels? Well let’s dive in.

For those who need a refresher, REvelations was a 3DS spinoff of the RE series for Nintendo 3DS. While it would later be rereleased and upscaled for console ports, I’ll primarily be talking about the handheld version since that was the intended platform.

The game was hailed as a glorious return to the series’ roots, a claim which I never really fully agreed.

Sure the game features a vast-interwoven location with many branching paths, intersecting corridors, large interlocking puzzles which encompass the whole map and an emphasis on finding resources.

But it has far more in common with RE4, which shares its over-the-shoulder viewpoint.

REvelations is primarily set on a cruise ship called the Queen Zenobia. Bio-terror agents Jill Valentine and Parker Luciani board the ship to find some missing friends and end up uncovering a conspiracy behind a massive bio-terror attack from a year prior.

The game’s main enemy is the Ooze, which are noticeably more designed around undersea creatures than the human-like enemies the series is known for.

The Ooze can crawl out of vents, from under tables and can pop up generally out of nowhere. While you’d think this enemy would be designed for easy jump scares, the developers seem to show a bit more cleverness than that, just like with RE4.

RE4 was one of the quintessential games on the Gamecube, and has been immortalized (partly through numerous ports) as one of the greatest action horror games of all time.

What characterized RE4 as such a mind-blowing game was its scenario and pacing. The game starts in this haunting pioneer-style village, before going to a medieval castle and then a military base.

But each of these locations loops in and around itself. Each room in these locations is almost always visited more than once, and while the game keeps a fairly forward-moving pace, the designers knew to make destinations feel memorable.

And enemy design is also top-notch. While RE4 still has tank controls like its predecessors, enemies are designed around that restraint. Parasitic villages generally crowd up, and travel in straight lines towards the player. Attacks can usually be avoided by aggressive play, like shooting villagers in the hands or legs, or by walking backwards. Combat arenas are also mostly circular, promoting smart movement.

While strafing left and right would be helpful, the enemies are designed so that’s not necessary. In fact I didn’t even acknowledge the lack of strafing in RE4 until I finished RE5 a few times and went back to RE4.

So how are REvelations and RE4 similar?

To start, the Queen Zenobia is cut from a similarly stained and ratty cloth as RE4’s village. While the player generally goes to a new location aboard the ship each chapter, these new locations connect with the previous ones.

You travel to the bilge but right outside the elevator there’s a hallway which connects to the cafeteria where you started the game. Backtracking to this area is necessary to find a key to access the bilge.

There’s also a pool on the upper floors which needs to be visited twice. Once to filter the pool so it becomes clean and again later to collect the items on the other side of the pool.

While the Queen Zenobia isn’t as interconnected as the Spencer Mansion or the RPD Station, it’s no more linear than some of RE4’s best locations.

REvelations enemy design is also focused around control limitations. The 3DS originally launched without a second thumb stick. Without a Circle Pad Pro (or a New 3DS/2DS) you have to stand still to aim, just like in RE4. 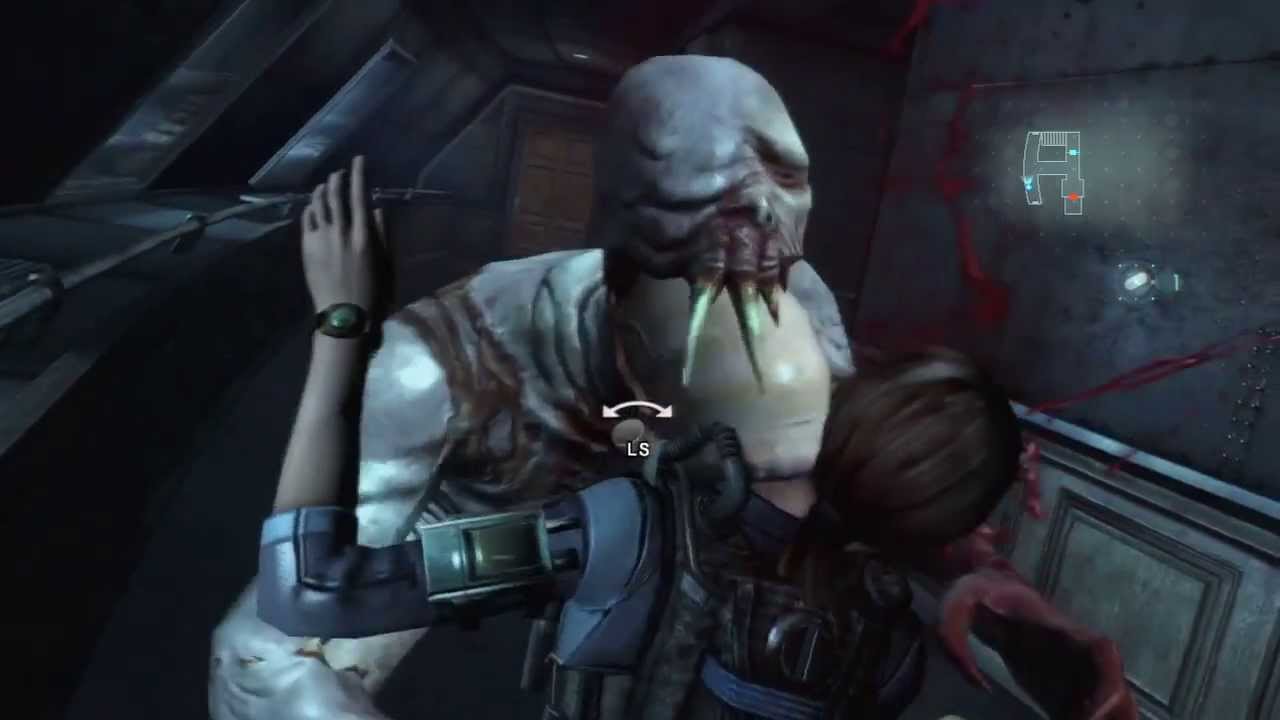 While you can move and aim, this locks your aim into place. It’s an interesting tradeoff, giving up your ability to aim for mobility.

But the Ooze are designed around this. Their massive torsos and smaller, fluid heads mean its far easier to get body shots than headshots this time around. And while in RE4 headshots could lead to openings for valuable melee attacks, in REvelations these opportunities are fewer in between. To compensate you can charge melee attacks for extra damage.

If you do have a Circle Pad Pro, or a system with a C-stick, you regain the ability to move while aiming, but the system’s tiny nubbin isn’t built for refined aiming. While I modded my 2DS to replace the rubber nub with a PSP thumb cap (for added comfort and control) the game is still playable, but aiming is more difficult. Thankfully bloated enemies with large hit-boxes make this a bit easier to handle.

So what were the faults that prompted people to disregard REvelations? Many took issue with the side-chapters that took place outside the Queen Zenobia.

I don’t disagree that the game could have been stronger if kept on-board the single ship, I understand the need for variety given the game’s handheld nature. Plus the more action-focused side chapters put the Queen Zenobia sections in perspective.

Chris Redfield can unleash a barrage of shotgun ammo and clips of machine gun rounds into a crowd of enemies, but due to Jill’s circumstances aboard the ship that’s a bit harder to do.

Another factor which incredibly cost the game some of its reputation is its story. Characters talk flatly, their visual designs are ridiculous and the plot is a limp impersonation of a Tom Clancy novel via Army of Darkness.

And my response to that is… why is any of that a bad thing? 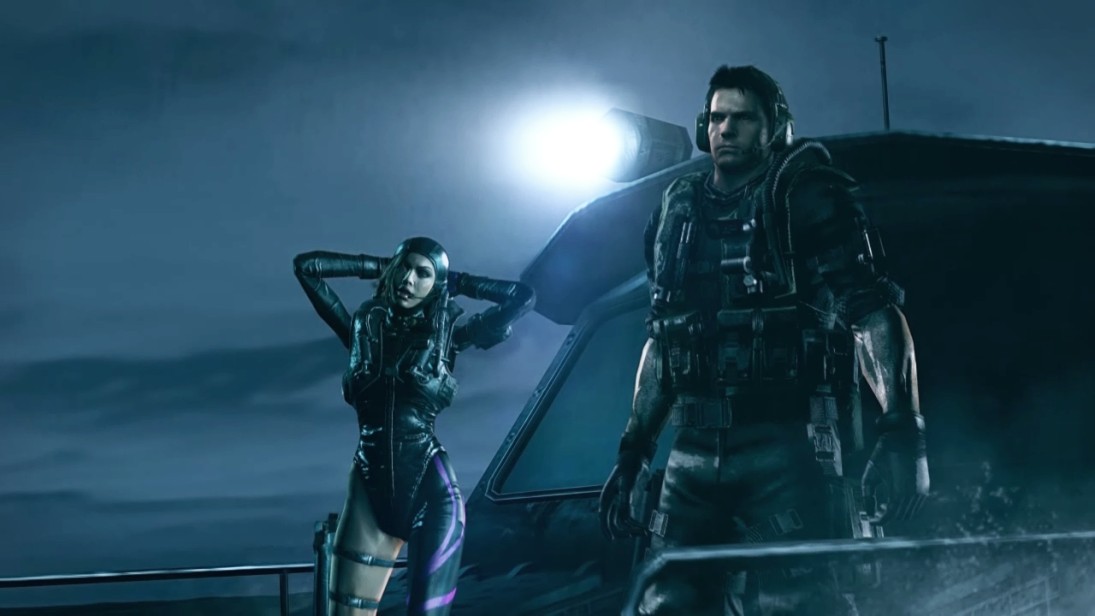 The haircuts in this game are so insanely impractical, they deserve to be carved onto busts and placed into a museum. One character, Jessica, has outfits so unbelievably ill-suited for combat against infectious creatures they might have come off a million-dollar runway.

And the plot is so deliciously bad, it just eats itself up. Main characters are so needlessly vague, keeping so many secrets to make the game’s title worthy of itself.

Why is there a man in a mask aboard the ship? THAT’s a revelation.

Who revived the terrorist organization behind the attack from a year ago? THAT’s a revelation.

Why is this unbalanced ginger aboard the Queen Zenobia? THAT’s a revelation.

Why are so many characters quoting Dante despite the game’s scenario having nothing in common with the Divine Comedy? Well, that’s not a revelation, but it is so horribly forced you can’t help but laugh.

Almost ever chapter of the game ends on a cliffhanger and begins a revelation. Revelations are forced into so many plot threads it’s impossible to follow all of them.

The game’s plot has so many layers, each inelegantly planted on top of each other, led by characters who speak like sixth graders mocking each other with jumbled insults they heard on late-night TV.

Did you know there’s three chapters in this game where you play as a creepy-stalker hacker and his badass friend who is so cool he has two machetes? And he wears a beanie.

And considering RE4 became the poster-child for terrible plots led by archetypal cool-guy protagonists, this is not far off from the DNA of the series.

Really RE5 and RE6 were outliers which felt indistinct because they took themselves so seriously. RE7 was also pretty serious, but had such outlandish villains you couldn’t help but laugh.

And today I don’t think we’d be playing Resident Evil 2’s remake if it wasn’t for REvelations, or at least we would have had to wait longer for it. This game was one of the pieces of evidence, alongside the HD rereleases of REmake and RE:0, which showed Capcom the survival horror genre isn’t dead.

I’m not saying everyone needs to go out and buy a copy of REvelations, but I don’t think this game gets the credit it deserves. It was one of the critical stepping stones which showed the series was still pumping blood.

If you’re at all interested in the series, you better do yourself justice and grab a copy. The handheld version is dirt-cheap and the HD remasters are on every console under the sea.

And if you find yourself trying what you thought was just an under-baked spinoff, instead to find one of the most underrated shit-shows ever to grace the 3DS and the Resident Evil series, then that’s really the best revelation of them all.