AKA ’How I married alcohol and social interaction with low-tech video games’.

Greetings people, I am me and today I am selling you on the greatness of board games. 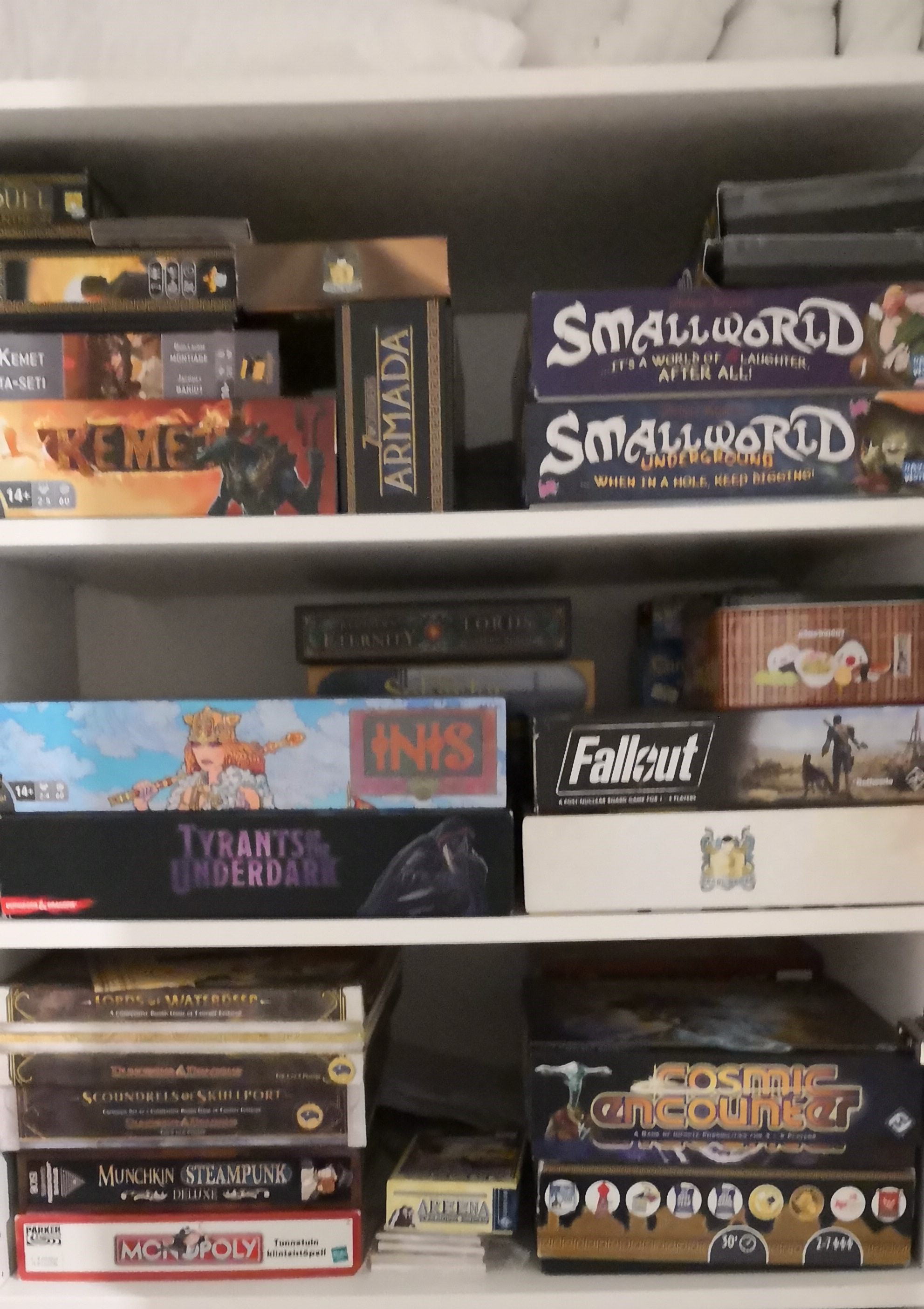 Small, but still many bucks wasted

Let me first gush to you how I ended up with this hobby, some points of interest from my collection and what the future will bring to me regarding board gaming!

As any young kid, my first experience of board gaming was with Monopoly (it’s still a “good” game as long as you’re planning to drink some beer with it), and Labyrinth, which still holds up to this day. My mom told me that I was taught to play board games in my youth since they wanted me to learn “how to lose properly” and that “you can’t always win”. They succeeded in that part and the irony was that after getting into the “deep end” of board gaming, I couldn’t teach my parents any of my games without them losing interest quickly. So, Scrabble and Rummikub it is then when we’re playing together.

For the longest part I didn’t give a rat’s ass about board games ‘til my friend taught me to play 7 Wonders, which blew my mind. That was the spark which made me interested in board gaming more heavily, and after some time I got my own 7 Wonders set which I then used to successfully convert other people to the world of board games.

It was cautious collection building after 7 Wonders, but what really opened the flood gates was the board game corner at LanTrek, where I played Small World for the first time, which heightened my senses to the next level, as well as open my wallet to drain my money. My master plan for acquiring new games was (and still is) to look at random games and simply order them, with little to no regard for whether I’ll like them or not. I can happily tell you that so far, it’s worked quite well. For now. 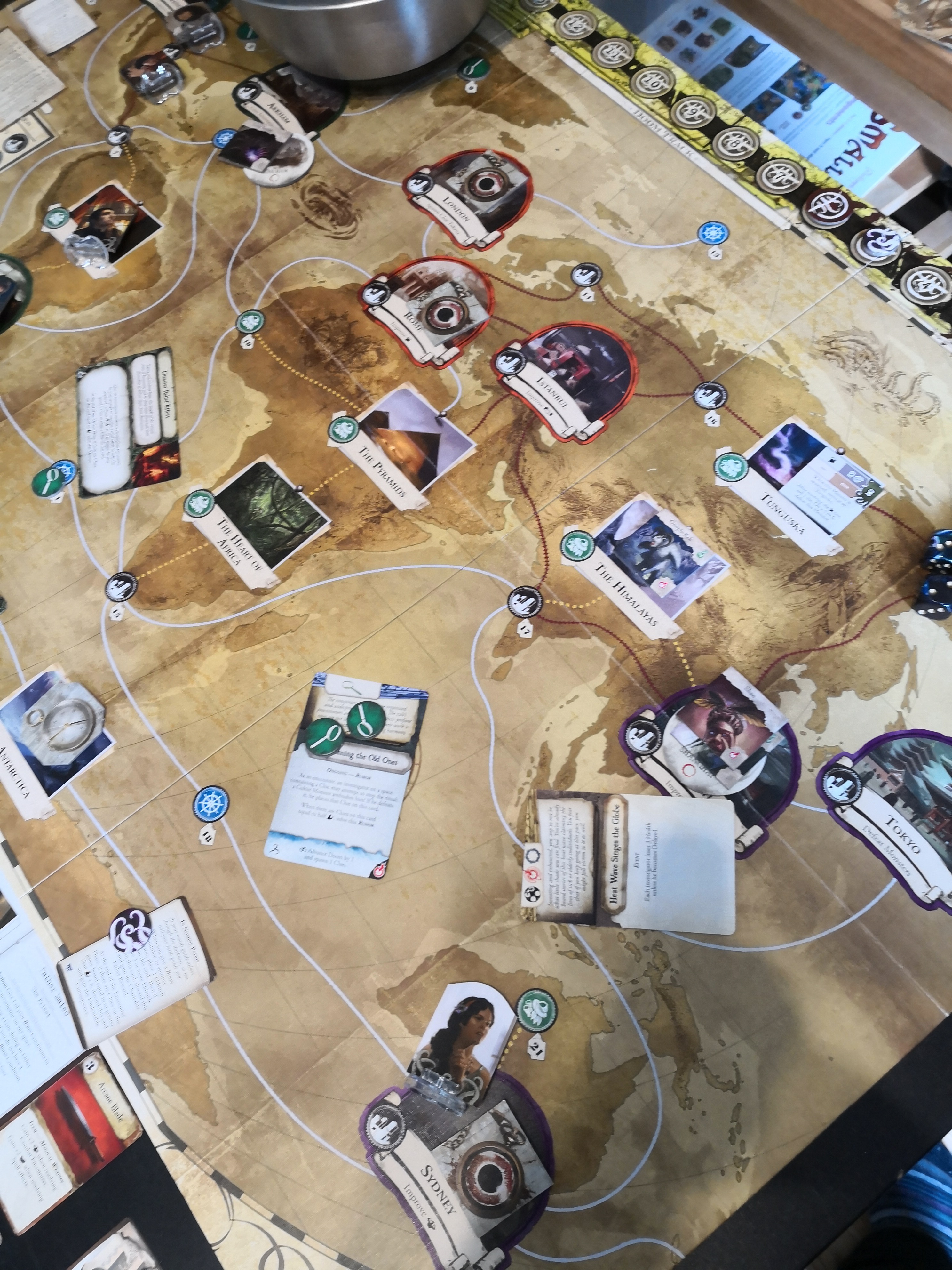 The second floodgate was opened after I got in to university to begin my master level studies in a different city, which has been a huge, HUGE, HUGE boon to my hobby. New people, new willing converts, and a board game club which has vastly improved my experience. I also rekindled with my old friends from a vocational institute to play some board games, which has made it easy to rationalize my impulse purchases. I can always say to myself that “some group will play this with me, so it’s an easy buy!” (though I am trying to slow my acquisition rate currently, wiiith a little twist – see later point). 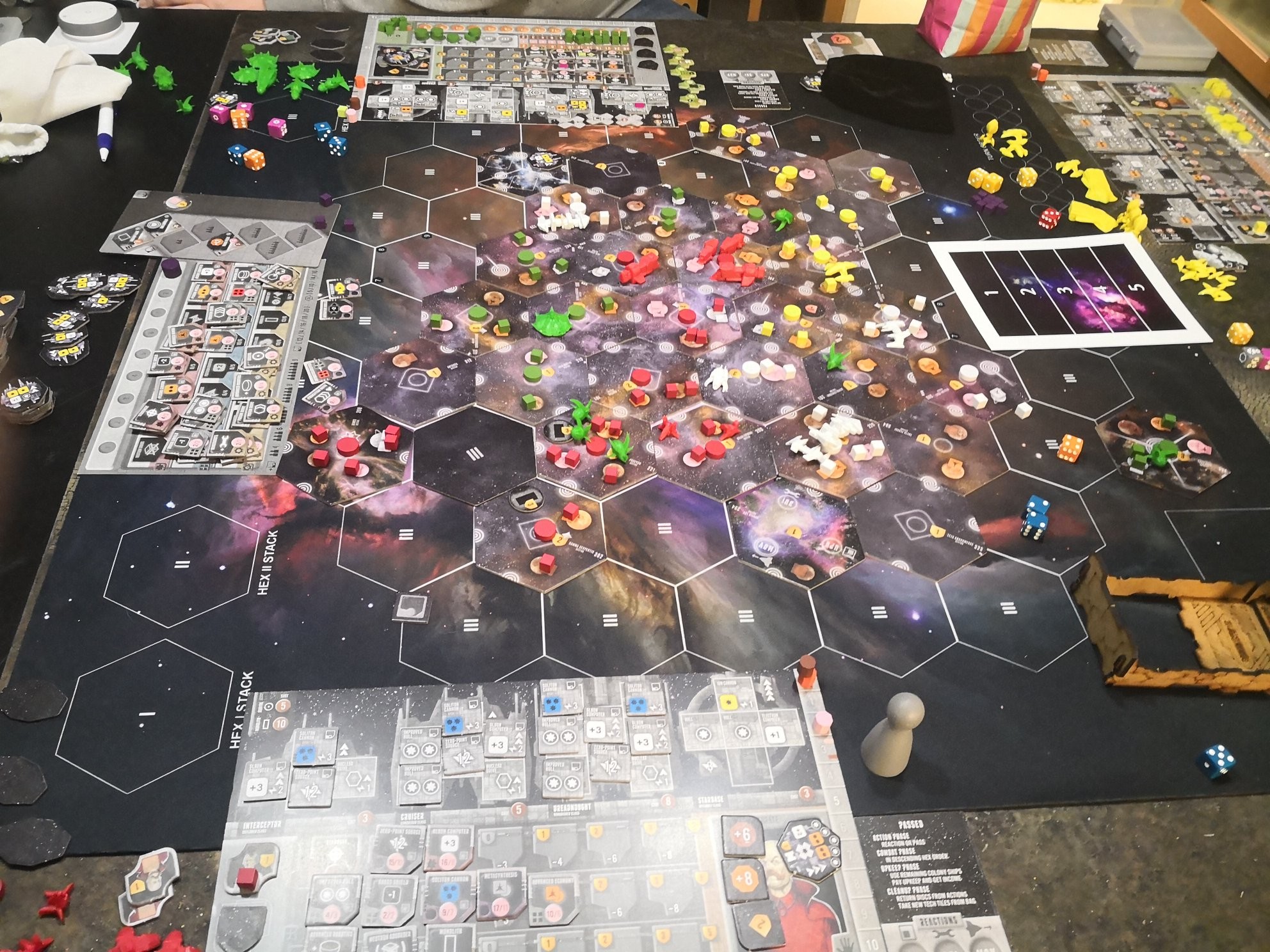 Anyway, enough of history, you can sub to me directly if you want to hear more of it. Next, I’ll be firing quick random points of interest from my game taste, experiences and everything in-between.

What’s in your collection? Too much to write down, so you can check it out here. It’s 97% correct (missing at max a game or two).

Favourite mechanic? Card drafting. 7 Wonders introduced me to it and it’s the most unifying mechanic across my collection. Could be deckbuilding too, but I love only one game which uses it.

Theme or gameplay? Gameplay all the way! Theme can be slapped on and I don’t really care about that shit, which is why I barely own any thematic games – outside of one, two or three.

Co-op or competitive? I really don’t care which one is it, but most of my games are competitive rather than co-op, so, yeah.

My games to teach for the new players? Used to be 7 Wonders, but I prefer Small World or Citadels these days more. If utterly new, I go for even easier ones, Sushi Go! Party or Splendor. Depends on the audience, really.

Measured by Board Game Geek’s weight rating, preferred weight? Middleweight to medium so in terms of BGG, that’d be 2.0 to 3.5 or so.

Least favourite thing(s) in board gaming? Not a mechanic nor theme itself, but I hate games with empty turns. This causes a bit of disdain towards Catan because it’s not very fun getting absolutely nothing five rolls in a row. Second one is players taking too long in their turns, but it’s not that bad and I try to be gentle on poking when they need to decide.

Guilty pleasure? Yeah, Monopoly with house rules takes fucking forever, but drinking beer and insulting your opponents is just that fun. Requires specific audience with specific mindset to enjoy it.

Most curious game in your collection? That’d be Kankaanpään Kunkku, which is localized version of Monopoly, made in and for my lovely city where I was born and raised. Absolute train wreck but hey, it bears the name of my home city. Good enough for my collection.

Games not played AKA shelf of shame? Quite a few, unfortunately. Munchkin Steampunk, Cosmic Encounter, INIS, Pillars of the Eternity: Lords of the Eastern Reach, Colossal Arena, Modern Art and only by a technicality, XCOM the board game as well as Small World Underground.

What would I want to acquire next? A proper 4X game in board game form. Eclipse 2nd edition was in my sights, but currently I have a secondary plan. A secret, secret plan.

What would I get rid of from my shelf? Honestly, nothing yet but Kemet is probably the closest one currently. Need to play it a second time ‘til I make my mind up about it.

Best thing about board games? Honestly, the social aspect of it which gets tied together by the board games themselves. Plus, alcohol usually improves the games instead of hindering them! 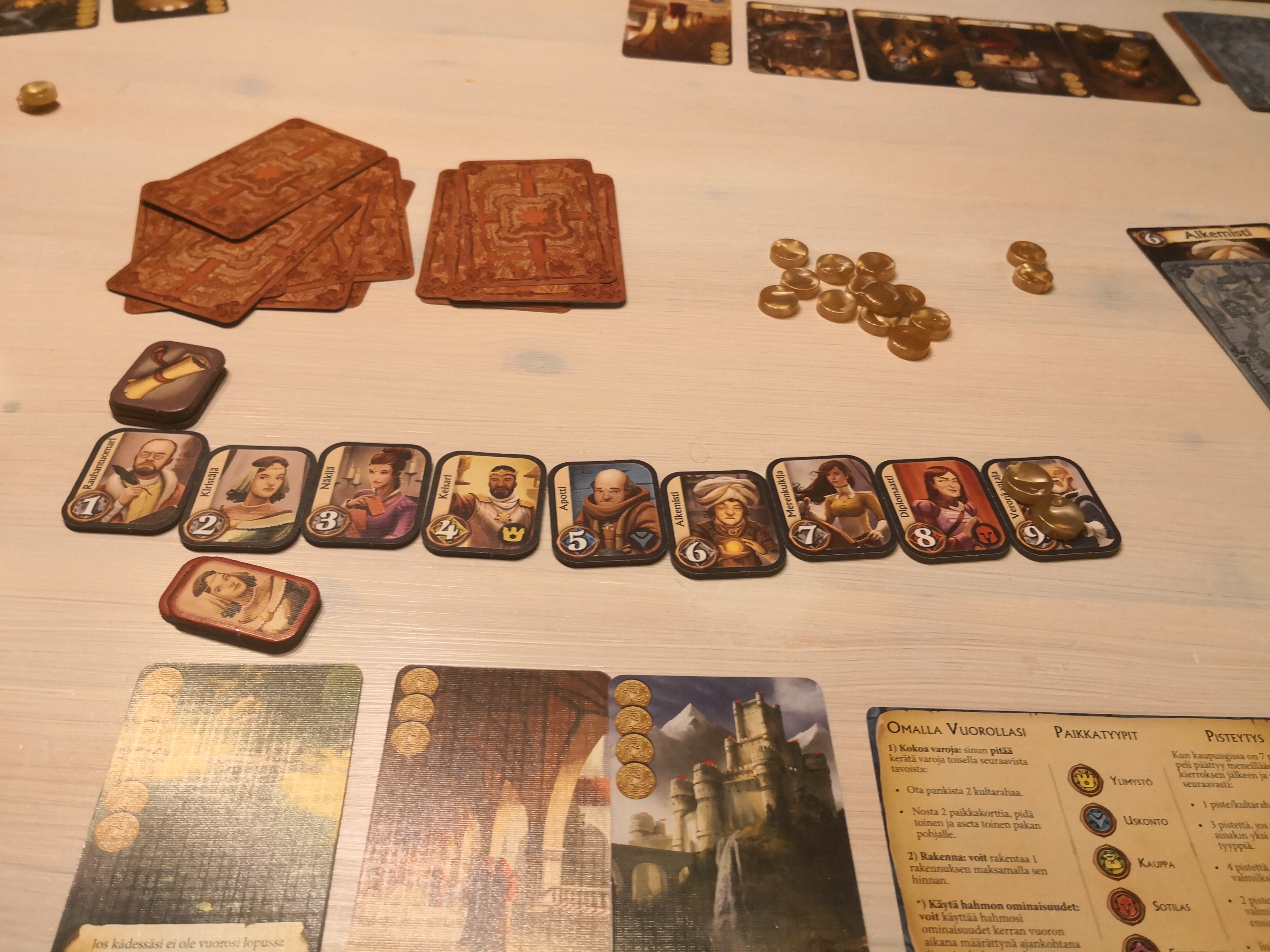 So that’d be the real meat of this blog post today. What’s in it for me in the future? Well, I hope to achieve some of these points:

Second, I wish to write some blogs about the games in my collection, starting with something I am super into currently. What game it is, I won’t tell, it’ll be in the next exciting episode of Ham’s Board Games (Z)!

For now, thank you for sharing your interest towards low-tech video gaming. Got any cool stories of your own or want to tell me about this great game I should check out? Unload them in the comment section and I shall dive into your thoughts.

Ps. Shout-out to my editor fixing my errors. Thank you, Luke.

Destructoid lacks proper board game content. And that's why I create it. To fill the void and fill the need!

Social, radio-voiced little dwarf who finds board games, cRPGS and alcoholism fun enough to fill his days with them.

Currently writing about board games in his collection