Welcome back to this week's discussion of The Orville! I'm a smidge behind my time this week, so I have this up later than I would like. But hey maybe more people have time to read blogs on Sundays? Guess we'll see. If you missed last week's, it can be found here. Before we dive in, remember our disclaimer: I adore Patrick Warburton. I will never not be glad to see him on screen. And what a sweet character. I feel like Tharl was meant to be only in that single episode, but I really hope I'm wrong. I don't know if he's slated for any upcoming episodes. But I hope he's at least a recurring character, if not a main cast member. I love the design of his species. They can just pound down the food. Bam. I have a total boner for him.

So, Xelaya is gorgeous. I love it. Why doesn't Earth have rings? I want rings around my planet. I don't, however, want the massive gravity. The gravity thing is an interesting concept. Obviously a species that developed on such a planet would have insane bone density and (in comparison with us), preposterous strength. The whole issue of Alara needing to return home to regain her physical capabilities does make a logical sense. But, the spaceship not having planned for this prior to now is a bit... well. It's dumb.

Ultimately, this was all a method for removing Halston Sage from the show. Whether it's because of her alleged romantic relationship with Seth or not, I still don't know. But I'm sad to see her go. She's one of my favorite characters. Ridiculously strong. But young and vulnerable. We've seen her grow a lot. Perhaps more than any character on the show so far. I don't know how the show is going to handle her absence. The real question is, is this a Dr Crusher situation? Or is this a Tasha Yar situation? Is she gone for a short time, or more permanently? The door is left wide open for her to return at any time. So I guess time will tell.

Speaking of doctors. We had two Star Trek alumni guest star and the both played doctors! Robert Picardo from Star Trek Voyager and John Billingsley from Star Trek Enterprise. They were both among the best parts of their respective shows. Well, in my opinion, Billingsley's Dr Phlox was the absolute best character on Enterprise (arguably the only good character, with Tripp as a possible second best). It actually took me a couple minutes to figure out where I had seen Billingsley before. I knew I had. His distinctive speaking out of the right half of his mouth thing is unmistakable. It took me a bit because he played an alien of a wholly different species on Enterprise. Anyways, I'm rambling. All I'm trying to say is that these are two marvelous actors and it was a real treat to see them again.

The plot was fine. It was all fine. I think there were some good performances, especially between Sage and Picardo. It was an interesting twist that their island neighbors were murderous psychopaths that were overwhelmed with grief over their son's suicide a year prior. I can't say how I would feel in their situation. I would be extremely upset, of course. I sure hope I wouldn't seek vengeance. At least not in this manner. 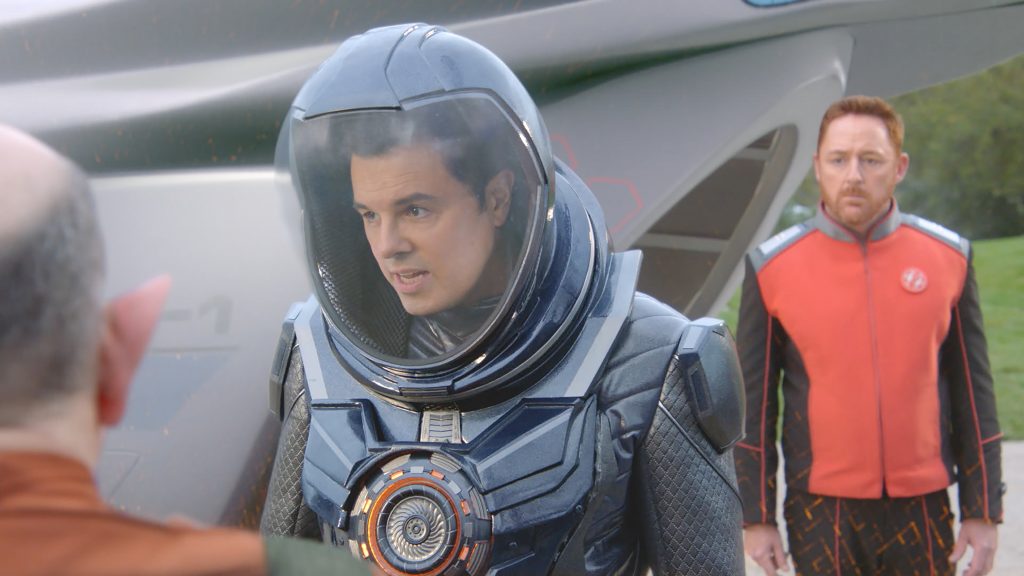 It also was convenient that Alara could suddenly walk again when the time came. And not just walk, but fight. But then she said her leg was about to give out, conveniently. So her dad saves Ed. But then she's walking just fine after that. The whole final sequence just felt a tad bit contrived. It worked more or less. But it was just too convenient for my taste.

I think this was a fine episode. Not great. If Alara hadn't left the show here, this would go down as a forgettable episode I think.

There's one small thing that really stood out to me. Alara had a hoverchair. This was a really cool effect. I had assumed it was on wheels and then the wheels were taken out in post-production. And maybe that's true. But there's a scene where they stroll down a beach towards their beach house. She hovers over sand and the sand remains undisturbed beneath her chair. That was just a really nice touch. So I don't know if that was green screen. Or maybe her chair was suspended on wires. I really have no idea. But it was a subtle effect. Totally unecessary for the plot. But it just makes the universe of The Orville feel much more real. I love that kind of thing.

So what did you think about this episode? Share with us below!

Oh, and in case you don't know what I was referencing when I started talking about Tharl, watch this: