One final welcome to you, friends! This is our last episode of Doctor Who until 2020. :( But I am pleased to create one last spoiler space for us to discuss the New Year's Special! In case you missed the last one, it can be found here. 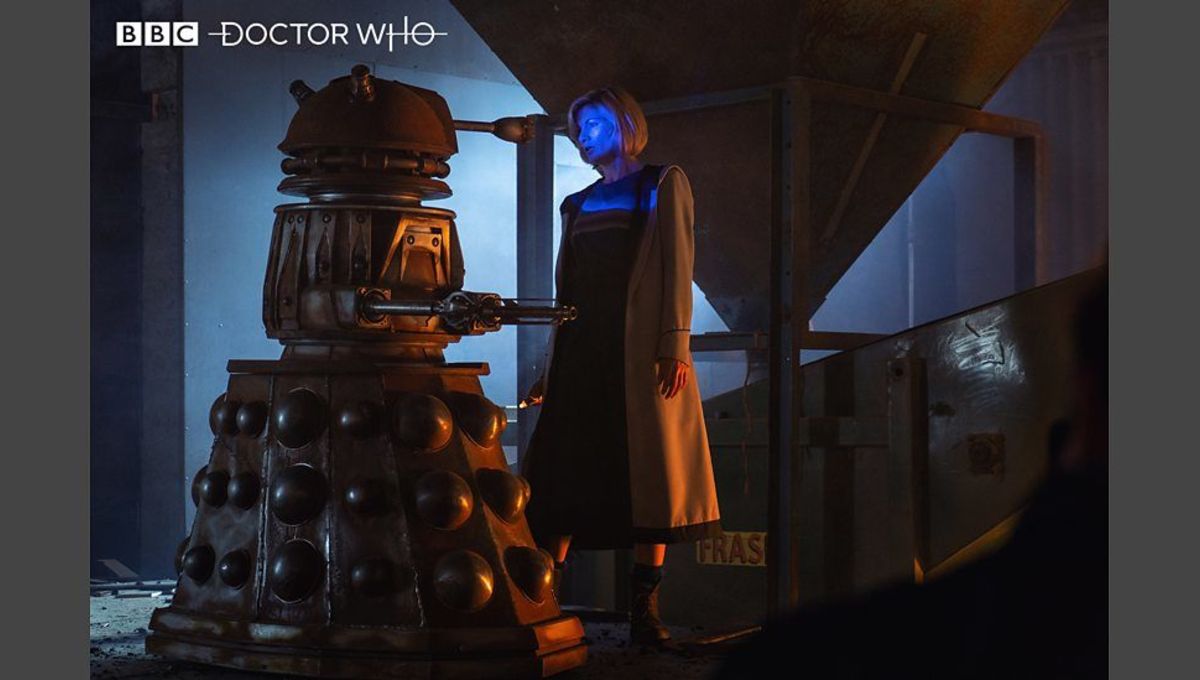 We should start by addressing the elephant.... er... squid thing... in the room.

The rumors were true! The Daleks made a triumphant return for the New Year's Special and it's a very good thing  that they did. In the last few years, the Daleks have been "reliably defeatable," as I've heard them described. The last time they were actually scary was The Asylum of the Daleks, I'd say. We were really due for a terrifying Dalek episode.

I think this was great. This was one of the most intimidating Daleks I've ever seen. I'm going to refer to it as Iron-Dalek. The scene of building a suit of armor out of scrap felt right out of the 2008 Iron Man film. The new suit is really cool, I'd say. It truly does look like it was made of garbage.

Of course, that isn't what was so frightening. The real terror was Iron Dalek's "piloting" of actual humans. Poor girl Lin is stupid enough to touch the horrifying squid on the wall and is immediately latched on to. This bit was 1000% predictable if you've ever actually watched the show. Don't touch the squid thing! Don't do it!

It's just so nasty and creepy. The thought of having that thing on my back makes my skin crawl. And to be possessed by it, forced to kill other people, that's horrific.

As always, Yaz was in the background. She didn't have much to do. I'm at the point where I'm frustrated about this. If they can't come up with some things for her to do next season (and fast), she needs off the show. Either that, or Ryan needs to leave to give her room to grow.

I could actually see Ryan leaving to bond with his father.

His dad is a schmuck. He is worthless. He simply wasn't there. Ryan has every right to be furious with him. And he is under no obligation to forgive him immediately (if ever). Aaron (I think that's his name) reminds me a lot of my father in law. My wife's dad is an awful father and has largely not been around. He brings my wife so much pain. Ryan wasn't kidding when he said he felt undeserving of Aaron's love. That's how my wife often feels. She feels that she has done something wrong. She's done something to drive him away. But of course, she hasn't. And neither has Ryan. They are the victims here. The burden of responsibility lies squarely on the shoulders of their pathetic excuses for fathers.

I really appreciated that Ryan was given the chance to lay it all out there. He was able to say how he really feels, down inside. And even Graham was given the opportunity to express his feelings. He said what I wish I could say to my father in law. Graham was not unkind, and certainly not cruel. But he was incredibly blunt. Aaron has not done enough.

All that said, when push comes to shove, Ryan doesn't want Aaron to die. He doesn't want his dad to be used, abused, and killed by an evil alien squid-monster. That doesn't mean all is forgiven or that Aaron can unhurt his son. But it does show that he hasn't fallen so far that Ryan wishes him dead. He does want his dad around. But he also wants his dad to be... well... an actual dad.

If I have a criticsm of this episode, it's that I don't know what it had to do with New Year's. I don't see why this was a New Year's special. It could have taken place at any time of year. It felt just like another episode of season 11 to me. A very good episode, to be sure. Just not related to New Year's. I guess we can hope that it's because Aaron resolves to be an actual father. But only time will tell if he actually keeps that resolution, or if he abandons it before the end of January. Will his new-found fatherhood last longer than his new gym membership? Find out next time on Dragonball Z!

Overall, this was one of the best episodes for Thirteen I'd say. It was really good to see her lose her composure a bit in the face of her greasest enemy. But what do you think? Share your thoughts with us! Remember, this is our last chance to discuss until 2020 (and I honestly don't know if I'll still be doing this at that point, who can say?)

Oh, and one more thing. I've decided to try out writing these recap thingys for The Orville moving forward. If you happen to watch The Orville, come discuss it with us! The write-up for the season premier of that show can be found here.