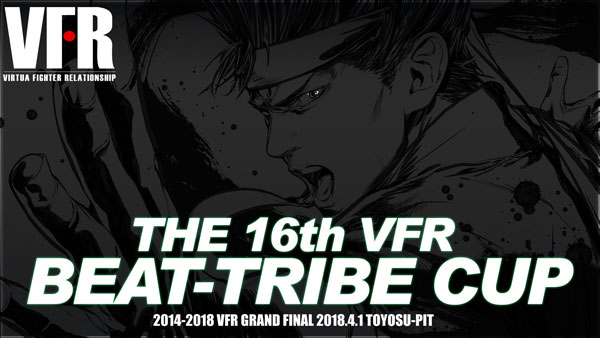 Two years ago when I did VF Month, I made a blog based on the history of the Beat-Tribe Cup series, covering from the Athena Cup of the 1990s to the series that we know and love today. The last Beat-Tribe Cup tournament that was held for the event was back in 2014, and that was celebrating the 20th Anniversary of VFR hosting these events. Since then, there hasn’t been another BT event until four years later…

The 16th Beat-Tribe Cup took place on March 31, 2018 under Toyosu PIT in Tokyo, Japan. There were a total of 510 players in 102 teams, meaning one team consists of five players. The event was streamed for over 11 hours non-stop.

Here’s something new that hasn’t been done before: Myke and the VF community of VFDC did a lot of stat-tracking for this tournament. They obtained their data from the VFR website, showing the character usage, appearance in videos, and much more. There were also stats based on fastest matches, longest matches, and win streaks based on certain players.

Let’s do the math of this event. As previously mentioned, there are a total of 510 players in 102 teams. Each team contains five players, whether they are part of the team or they are rental players. I’ve talked about rental players in the BT series two years ago.

Now let’s talk about the character roster. VF5FS has a total of 19 playable characters (20 if you count Dural, but she’s not tournament legal). Each player specializes a certain character, so that means that they only have one main. Keep in mind that Virtua Fighter is the type of game that’ll take you months to actually learn one character. 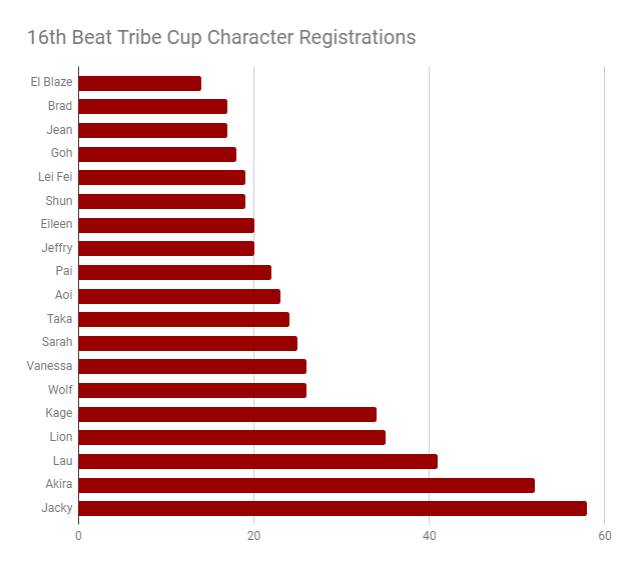 Even though there were 14 players that were using El Blaze, he didn’t have the lowest appearance on stream. Sarah had the lowest amount of screen time since she was shown five times, yet there were a total of 25 players using her. Keep in mind that some of the matches in the tournament were done off-screen.

Let’s go over the match duration and the win streaks. The average match would last between 1:51-2:00. The fastest match in the tournament was Joseph (Akira) vs. Ryo (Eileen) in the 1st Round, lasting only 57 seconds. Joseph performed two perfects in that game: one in the 1st round and one in the 3rd round. In contrast, the longest match in the tournament was Reorau (Goh) vs. Kyou-chan (Vanessa), lasting only 2:46. This was a great match to watch.

In the end, Family gyōza go-ninmae ♪ would become the winners of the 16th Beat-Tribe Cup, with Keisuta (Shun) becoming the MVP of the team. Although if we’re going to be honest, I think Puta should have been MVP because he was one of the five men to have a 4-win streak during Grand Finals.

The 16th Beat-Tribe Cup was a great way to breathe new life into the VF Community, and even though the community is still relying on VF5FS, at least they made more of an attempt to play what they love. With only 510 players in the tournament, the scene will do whatever it takes to keep Virtua Fighter alive. And with the 17th Beat-Tribe Cup announced for March 23, 2019, there are no signs of slowing down.

And there you have it, folks: another Virtua Fighter Month done. I’d like to wish you all a Happy New Year. See you all in 2019! 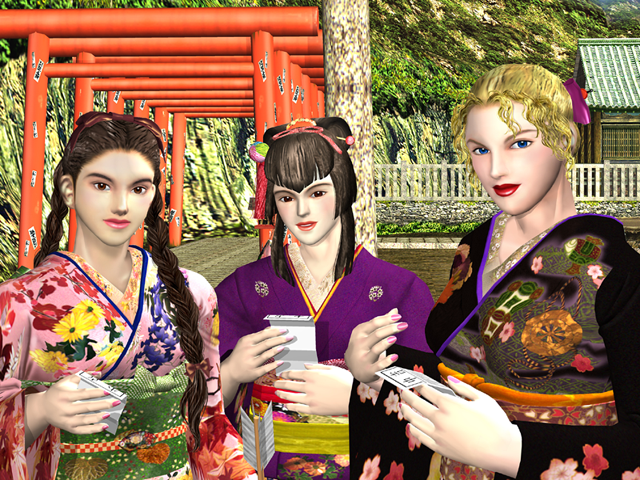