Hello everyone, it's time for another discussion of Doctor Who! If you missed last week's discussion, check it out here. As always, here is our disclaimer:

Oh fez, it is good to see you again!

Right off the bat, this was a really good episode. One of the better ones this season. I especially appreciated that all 4 of our main cast had something meaningful to do,, and they each had a turn in the spotlight. This episode struck an excellent balance in that regard. Fine permances all around from our main cast. Graham, of course, was my favorite. I've already become so biased about it. I just love every moment that he's on screen. 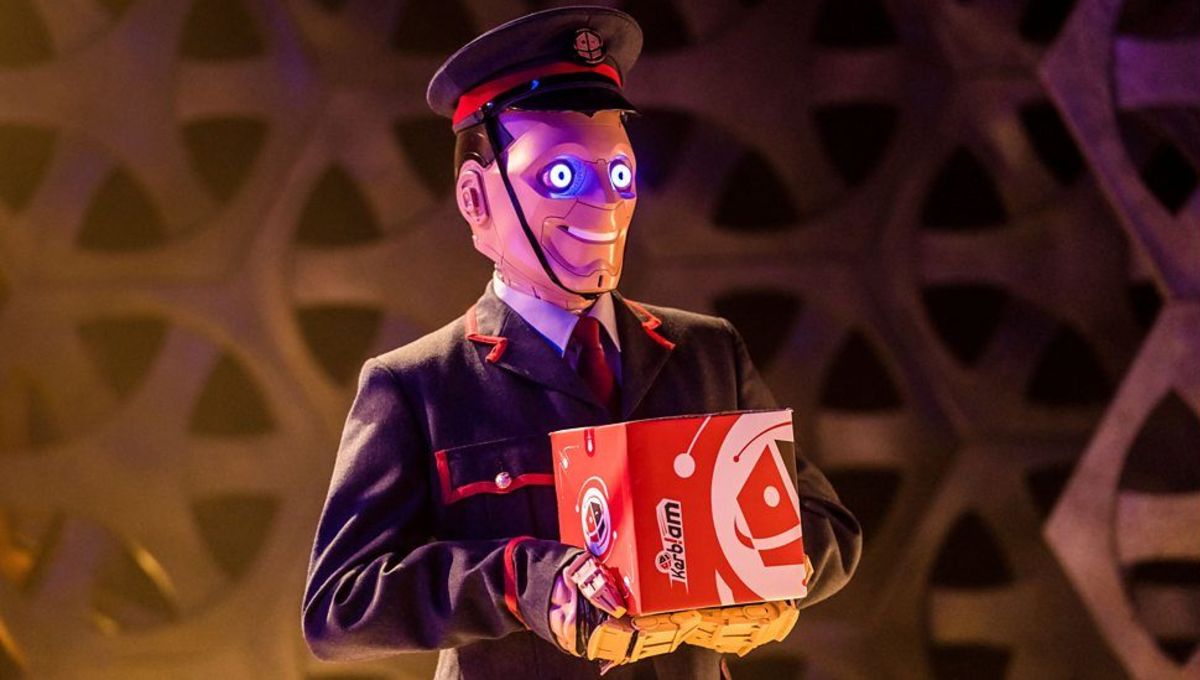 The Doctor would call me a robophobe. And it is absolutely fitting. I am terrified of robots. A lot of people think about and plan for a Zombie apocalypse, but that's just stupid. Robots actually exist and they can be programmed to kill. They can deliver bombs. They are a very real threat to our society! I hate them.

These robots are obviously terrifying. When the Doctor says she loves the Kerblam-Man, all I could think of was this moment from Galaxy Quest:

They're so obviously Whovian monsters! After 2000 years of life, you should be able to recognize this immediately!

But this episode had a surprising twist and I must give the writers credit for it. They truly subverted my expectations. In this situation, the robots were (kind of) the good guys. They were violent, but that's because they were trying to take out the true villain of the episode.

Our villain is nothing more than a janitor. That caught me totally unawares. It makes perfect sense, though. They have access to literally everything and no one thinks about them or notices them. They are in the perfect position to do damage. It reminds me of the first ever episode of Sherlock (spoiilers) where the villain is a Taxi driver. I will never take a cab alone because of that. And now I may never look at a custodian the same way again.

This episode also reminds me of Blink. Doctor Who took something completely innocuous and made it terrifying. Just as I can't look at statues the same way I once did, I cannot ever look at bubble wrap the same way again. Every time I pop some bubble wrap, a small part of my brain will wonder if I am going to explode.

Speaking of which, I also did not expect to watch Kira explode. That was very suprising, and very dark. She was such a sweet girl. All she wanted was a present. And she got one. It was also tragic Yaz's coworker (Dan was it?) walk right into a death trap.

There's a lot to unpack (heh) with this episode. I surely won't hit all of the major points. But I will say that the automation-to-human ratio is an interesting concept. Requiring that 10% of an entire workforce is human is quite an idea. On the one hand, people need jobs. It would be good to guarantee jobs. But if people don't have jobs, no one will have money to purchase goods. The economy fails. I feel like the society in which Kerblam exists is half-way on the way to Star Trek. When all manual labor is automated and all people have access to food, shelter, water, and healthcare, then society will become a utopia. But unfortunately, there will likely be a state between now and then where robots take all our jobs.

I did have one major problem with the episode. Kerblam has 10,000 employees and is the biggest employer in the galaxy? UPS has somewhere around 400,000 employees. I really think the writers don't understand how shipping works. Even if 90% of UPS employees were replaced with robots, you'd have 40,000 workers.

Twirly, you're the real MVP. What an adorable little monster.

I don't have much else to say. I just had a lot of fun with this episode. It will definitely be one of the more re-watchable episodes of the season. But what did you think? Share your thoughts down below!

You have to check this out, BTW