Band of Slackers: Zombies can be cute?!

I was originally intending to post this last month as part of Destructoid's Band of Bloggers segment, but you know, this that and the other thing happened, and anyways, fuck it I'm still gonna talk about zombies today.

Video games are hardly known for their subtlety and nuance when it comes to storytelling. Games like Call of Duty or DOOM attempt to engage you with all the understated tranquility of a brick flying through a glass window. That's probably why for the longest time up until The Walking Dead exploded onto the scene, American television mostly shied away from zombies, while video games on the other hand have relished in them. There's just something inherently silly and a bit too on-the-nose with the concept of a shambling corpse coming to un-life; moaning oh-so-menacingly as it slowly creeps toward its victim.

Yet for games like Shantae and the Pirate's Curse, it somehow manages to contain that rare sense of depth from a small heartfelt moment while also being utterly absurd and over-the-top with its writing. And on top of that, it reinvents the zombie as we know it. 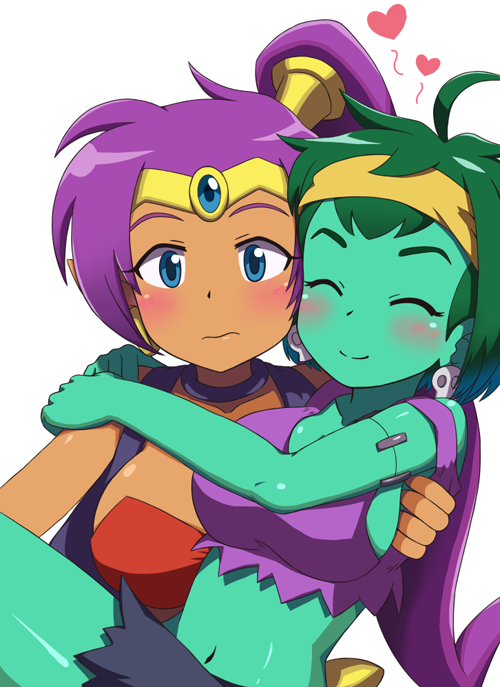 Enter Rottytops: Shantae's bubbly brain-eating bestie, who may have also doomed the entire world for a bag of coffee. The classical zombie has always been portrayed as a disgusting creature of horror barely capable of any thought beyond its basic instinct to devour everything in sight, and while Rotty certainly carries some of these traits to a degree, the rest is a rather ingenious subversion of zombie tropes; turning the entire concept on its head (and throwing it as far as she is able). Rather than being truly brainless, Rotty's zombie-like mindlessness manifests as a sort of naïve innocence; a dense airhead who is oblivious to social cues and her own mistakes. In this way, she is made to be more endearing than frightful.

There's just so much to love about this character, from her whimsical carefree nature to her mischievous shenanigans that she always gets herself into. She's constantly stuck in her own world; bouncing her hips back and forth in a state of ignorant bliss. When she's not making web puns, she's usually cooking up some sort of scheme to get a taste of Shantae's brains, and often dragging them both into trouble because of it. One would think this makes Rotty an enemy to the half-genie hero, but it's in Pirate's Curse that we learn more about Rotty's true feelings in a surprising display of accidental honesty (warning: spoilers ahead).

As part of Shantae's mission to save Sequin Land, she must at one point descend into the Village of Lost Souls; a place that appears to be an afterlife of sorts. Spirits are often ferried there to forget about their past lives and misdeeds, but what Shantae didn't expect to encounter there was Rotty's soul as well. She's almost unrecognizable with her ghost manifesting as her former human self, and likewise for Rotty, she's unable to recognize Shantae, being that her memories have been wiped as a result of entering the village. However, when Shantae recovers Rotty's lost locket and returns it to her, something special happens.

Opening the locket reveals Rotty's two brothers, which begins to refresh some of her memories. She starts fondly recounting how her brothers always looked after her. As Rottytops continues to reminisce though, she begins to remember that someone else was always there for her as well, but she still struggles to recount the name. She starts describing how this person is so smart and friendly, and she wants to be just like them, but whenever she tries to reach out and tell them how much they mean to her, something always goes wrong. It's pretty clear at this point that Shantae knows the person in question here is herself, but she coyly decides to play along as oblivious, simply telling Rotty that she'll be sure to find her friend and tell her how important their friendship is. It's a very cute moment, and one that is so cleverly-presented in the way that it develops Rottytops' character. After all her screw-ups and mischief, she finally manages to tell Shantae how she really feels, yet she doesn't even know it.

This is a bizarre character concept that really shouldn't work, but the Shantae series takes inspiration from a common school of anime philosophy, which states, "If it exists, we can make it into a cute girl." And lo and behold, we are given Rottytops. Against all odds, it turns out even zombies can be cute.