Dear friends, I am overdue for one of my trademark listicles. I really like movies. I've written blogs about my favorite films, my favorite sequel films, and even my favorite Christmas movies.

When I wrote my list of favorite films, I didn't include straight-up comedies. They're so very different from regular films. They aren't written, directed, or performed in the same manner. They're often lower budget (with the biggest expense being the payroll of the headlining actor). They don't utilize tons of special effects usually. They're just straight up humor. And if you manage to tell a compelling story with relatable characters, that's a bonus (but not necessarily a requirement).

There are many, many comedies that I have not seen. I will only include ones that I have seen. I'll also mention that I'm not a big fan of the typical R-rated comedy. Superbad is fairly funny, but it's like the pinnacle of that particular brand of comedy. I just don't find it they hold up on repeat views. They're very low brow and heavily rely on shock factor, in my experience. But that's just me. Don't let me hurt your opinion of these films. Just don't be mad that they aren't listed. I'm also not including Christmas movies, since I did a whole list of them. And I narrowed Mel Brooks down to 1 film (the entire list could have been his films, honestly). But without further ado, let's jump in! 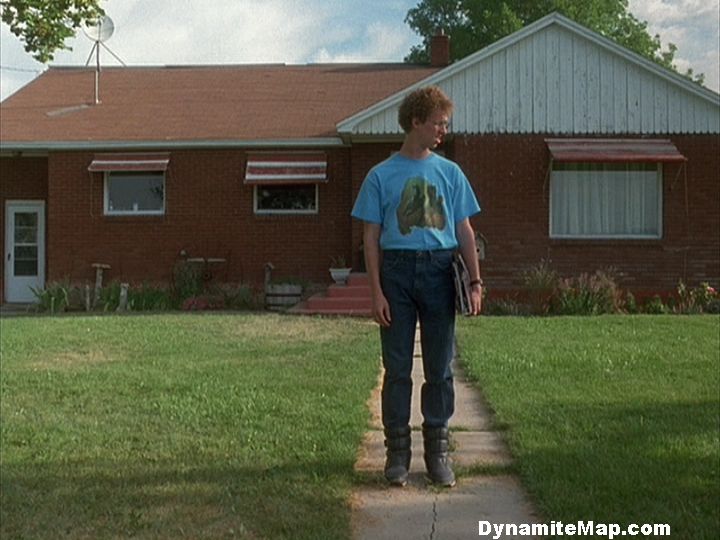 I'm sure I'll get flack from some of you for including this, and that's fine. This film doesn't work for everybody. It is a very particular breed of humor. But it kills me. The funniest shot in the movie is in the above picture. Just looking at him. The way he's dressed. The way he stares off into the distance. Gets me every time. But there's lots of funny moments and lines and memorable characters. To quote David Letterman, "Either you were Napoleon Dynamite, or you knew him." I really love Uncle Rico. I have an Uncle in real life that I refer to as my Uncle Rico. He could likely have been a professional baseball player, but he flunked out of college and now he paints houses for a living. But sports are his life. Watching, playing, coaching little league, etc. Anyways, Uncle Rico is as a real a character as any I've seen in film.

"If Benjamin were an ice cream flavor, he would be pralines and dick."

I watched this a lot in college. It has great lines and characters, a gorgeous woman, and fantastic music. Also, bonus points for the first comedic role (that I know of) for Rob Lowe, who goes on to be one of the funniest actors in Parks and Rec. The film is about 2 guys that make a crappy public access cable show in their basement about rock music and pop culture. One of them falls for the lead singer of a band. Rob Lowe tries to take over the show. A famous rocker makes a cameo appearance that you'll enjoy. Great fun. 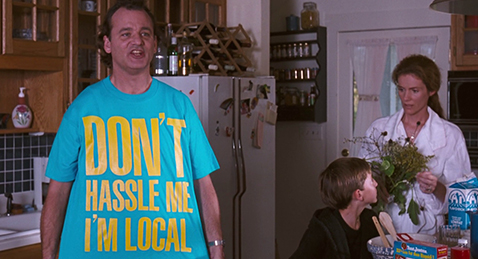 "Roses are red, violets are blue. I'm a schizophrenic, and so am I."

If you haven't seen this, you really should. For my money, it's Bill Murray's finest acting. He plays a mentally unstable lunatic that essentially stalks his new psychiatrist (played by Richard Dreyfuss). Watching the insanity unfold is delightful and cathartic. But it doesn't cross over into depressing (unlike another funny movie about mental illness, The Dream Team).

I apologize to all Potterhead for saying this, but Alan Rickman was born to play Alexander in this film. He is so good. The rest of the cast all put forth phenomenal work (I'll especially give props to Sam Rockwell here). If you aren't familiar with this film, you really should be. Conceptually, it's a parody of Star Trek. But it goes so far beyond that (where no comedy has gone before, you might say). It is commentary on fan culture, on acting, and hero worship. It's a great science-fiction movie in its own right. It has action, drama, and romance. It's a bit like The Princess Bride in that it fits into more than one genre. I almost didn't include it in this list because it isn't a straight-up comedy. But it really is just so funny. I think it's a comedy first, before everything else. It's a movie about actors that used to star in a TV show called Galaxy Quest. Then they find themselves in space on a ship modeled after the one they were aboard in their TV show years earlier. They must save an alien race from annihilation, even though they are completely unqualified to do so. Galaxy Quest is supposedly getting a TV show made by Amazon at some point. So keep your eyes peeled for that! 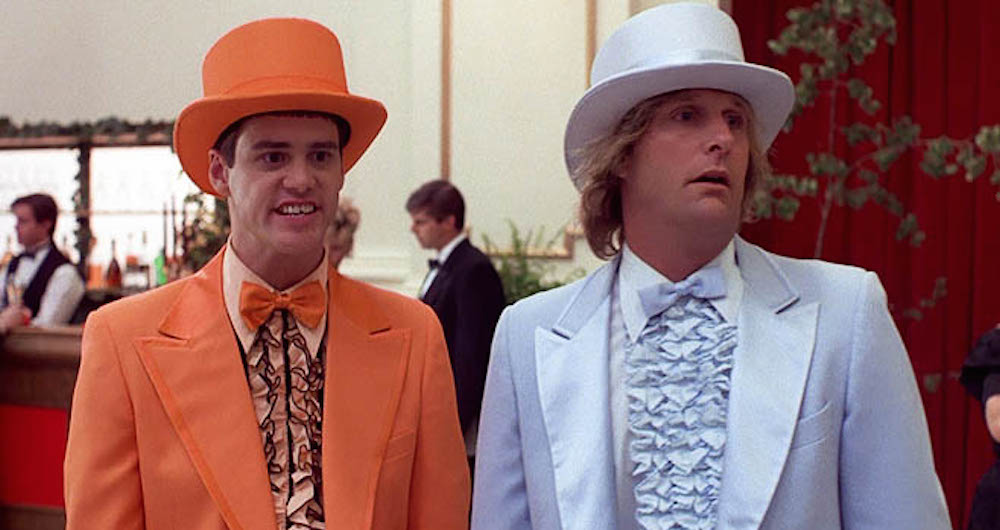 In Jim Carrey's funniest performance, we have Lloyd. And Jeff Daniels, who does far more drama than comedy, we have Harry. But which is dumb and which is dumber? I won't say. I'll leave that to you. But rest assured, they are both supremely dumb. And it's great. Two dumb guys accidentally get wrapped up in a kidnapping tale. All while Lloyd seeks after a beautiful woman he met as a Limo driver. I've seen this movie so many times and it still holds up. If you haven't seen this, go watch it right now.

It was hard to pick a quote for this one that wouldn't get me BANED. This is an irreverent, uncomfortable comedy. It is a harsh criticism of Hollywood and of modern culture. It really pushes the limits on race and intolerance. It's a story of a town in the Old West that has a black man hired to be the Sherriff. Mel Brooks considered it to be the "greatest" film of all time. It is a bit manic and, and a little bit all-over-the-place. And by the end of the movie the 4th wall isn't just broken, it's completely torn down. I'd like to mention that it has Gene Wilder's finest work (that I've seen).

"I award you no points and may God have mercy on your soul."

I must confess. It has been quite a few years since I last watched this. I'm afraid to rewatch it. When I was a teenage boy, this was the funniest film ever made. I want it to stay up on that pedestal. I do fear that it will fall from that pedestal if I watch it now. I once saw the most perfect quote on the internet that describes Adam Sandler (and this is Peak Adam Sandler). "The older he gets, the funnier Adam Sandler used to be." This is a movie about a grown man who learned absolutely nothing in school and then is shocked to learn that he won't inherit his father's business. So he challenges himself to go back to school. He spends 2 weeks in each grade. And his wealthy father pays the schools handsomely with donations in order for them to allow this. If you've seen any Adam Sandler movie, you know what you're getting into here. Only here it's taken to the greatest heights that his particular brand of comedy can possibly achieve.

I'm gonna rewatch it this weekend, aren't I? 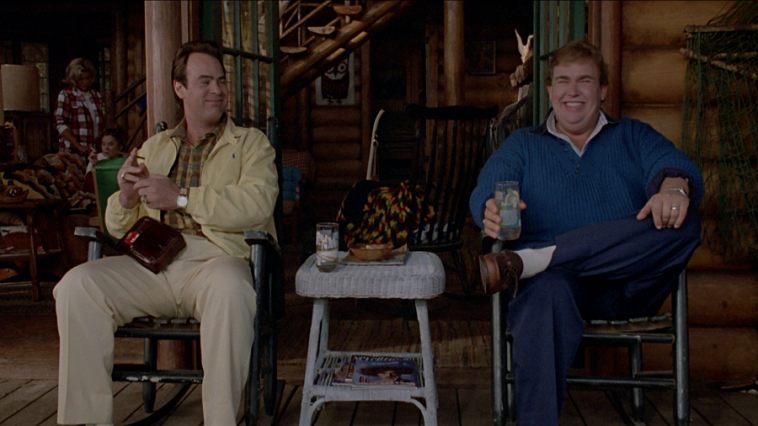 "If you meet any friends, bring them back and we'll give them a ride in Suck My Wake."

Dan Aykroyd and John Candy. Need I say more? Chet (Candy) wants to take his family for a nice vacation to a cabin out in the woods. His rich brother-in-law Roman (Aykroyd), shows up uninvited and he is the worst. Hijinks ensue. The film features the funniest and best water skiing scene in film history. It features bears, bats, neo-skunk hair, a food challenges, cheeky raccoons, and dynamite. This film actually reminds me a lot of the delightful Dan in Real Life, if you've ever seen that. Dan in Real Life is more of a family drama. This is a straight comedy. It's very family dyamics-focused. It also benefits from repeat views.

2-Monty Python and the Holy Grail 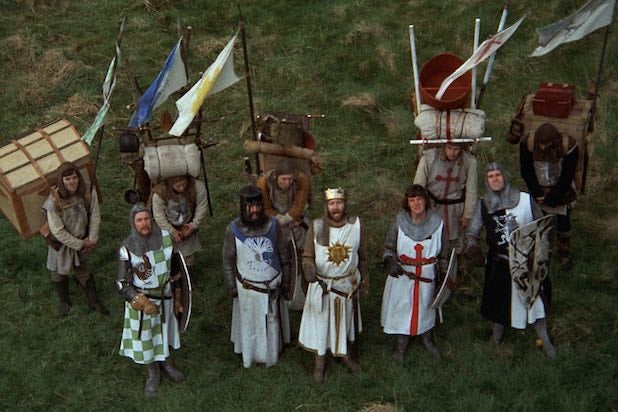 "Your mother was hamster and your father smelt of elderberries!"

This is a movie that I don't need to watch. I've seen it so many times and quoted it so many more times, that I can essentially replay the movie in my head. If I want to think of a scene, I just go there in my mind. This movie has the funniest dialog in all of cinema. The first 20 minutes are funnier than most comedies could ever dream of being in their entirety. The film is self explanatory. The unparalleled comedic geniuses of Monty Python depict King Arthur's Quest for the Holy Grail. This is probably the most quotable movie ever made. Even if you haven't seen it, you've certainly heard at least 20 different lines from the movie in regular life. If you haven't seen this, you really should. Aside from being supremely entertaining, it is a touchstone of popular culture that is referenced very often. Also, bonus points for being transformed into a phenomenal musical, Spamalot. 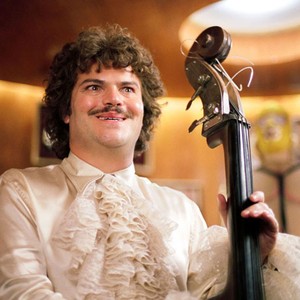 "Get that corn outta my face!"

Nacho Libre is the funniest movie ever made. It is the pinnacle of Jack Black. It's a celebration of absurdist humor. If you haven't watched it, or if you think you need a rewatch, have a nacho party. Have some friends or family over. Make inordinate amounts of nachos, and eat them while watching this movie. It will enhance the experience, i promise. This movie is ridiculous in every way. And I love it for it. It's about a priest in Mexico that decides to become a Luchador (masked wrestler). It features real Luchadores, which is cool. It has a few songs that I assume are Jack Black originals. I can't really explain why this movie tickles me so. But it sure does. I hope you'll give it a chance if you haven't.

So there you have it! My list of the 10 funniest movies! This was probably my most difficult film list so far. There are just so many funny movies out there. It hurt to leave some of them off the list. And I'm sure that tomorrow I'll realize I forgot one and I'll facepalm hard. But I hope you enjoyed my list. I really hope I have introduced some of you to films you've never seen. If you haven't seen some of these and have questions, let me know and I'll tell you more. Or you can google it, or whatever. Anyways. What are the funniest films you've ever seen?