Brackets for each game has been uploaded, players are making their final preparations before entering the big tournament… I’m very excited about this tournament to take place!

One thing I’d like to point out that for the first time ever, a non-Capcom fighting game has the most entrants this year, which is Dragon Ball FighterZ with 2530 entrants. Street Fighter V: Arcade Edition is in second place with 2421, followed by Tekken 7 with 1504. Super Smash Bros. Melee and Super Smash Bros. for Wii U both have 1302 and 1303 respectively. Blazblue Cross Tag Battle has 1148 entrants, and Guilty Gear Xrd REV2 has 621. Lastly, Injustice 2 has about 356 entrants.

Of course, Guilty Gear Xrd REV2, Melee, Tekken 7, DBFZ, and SF5AE are having their Top 8 finals on Sunday in that particular order with AE closing the show. Not gonna get into that discussion, let’s move on.

Now onto the real purpose of this blog… What do I expect to see at EVO this year?

There are several things that I expect to see this year, and I’m not just talking about the main games in the lineup. There’s AnimEVO, alongside with side tournaments for other games as well. But here’s what I’m looking forward to seeing this year…

Everyone knows about the EVO moments, from the popular EVO Moment 37 of Daigo parrying Justin’s Super in Street Fighter III: 3rd Strike, to the amazing clutch of EVO Moment 51 where PR Balrog pulled it off in Marvel vs. Capcom 3. And we all can’t forget Woshige’s premature celebration at EVO 2015…

EVO moments is what makes this tournament series so great. I expect to see some from games such as Street Fighter, DBFZ, and Tekken. And speaking of Tekken, there’s also something else I expected to see...

To quote Tasty Steve: “This is some Good Ass Tekken!”

When it comes to Tekken tournaments, I expect to see some Good Ass Tekken from these players. I’m not just talking about the top players, but I mean each and every one of these Tekken players.

Top 8 in fighting game tournaments gets intense, but it gets even more intense at EVO.

When you look at the matches from Top 8, you can feel the emotion and the passion of these fighting game players. These players have their own goals. Some pursue fame. Some want to become a legend. Some want to defy all odds. Some play for the love for their games.

Whatever the case may be, these players all share the same goal: to show the world why we love playing fighting games.

Trailers and Other Surprises

Tournaments aren’t the only thing that I’m looking forward to seeing at EVO this year.

For those that don’t know, EVO is more than just a fighting game tournament, it’s also known as the E3 of fighting games because of the trailer reveals and other surprises that come with it.

Companies such as Capcom, Bandai Namco, Netherrealm, and Arc System Works would present an announcement before or after Top 8 for their respectful fighting games. Here are the announcements that I expect to see at EVO…

Whatever the case may be, I am excited to see what they have in store for us!

Before I end this blog off, I want to make some bold predictions on who will win these tournaments. Here’s who I think will win in these respectful games:

As for Side Tournaments…

EVO 2018 is going on all this weekend at Las Vegas. Eight games on the main stage, with several others as side tournaments, some from the AnimEVO series. If you love fighting games, or if you are curious what the fighting game scene is like, watch the tournament. 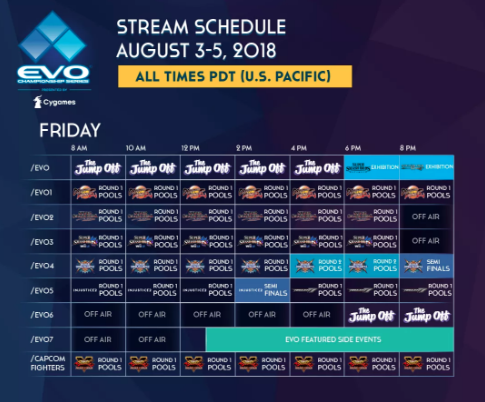