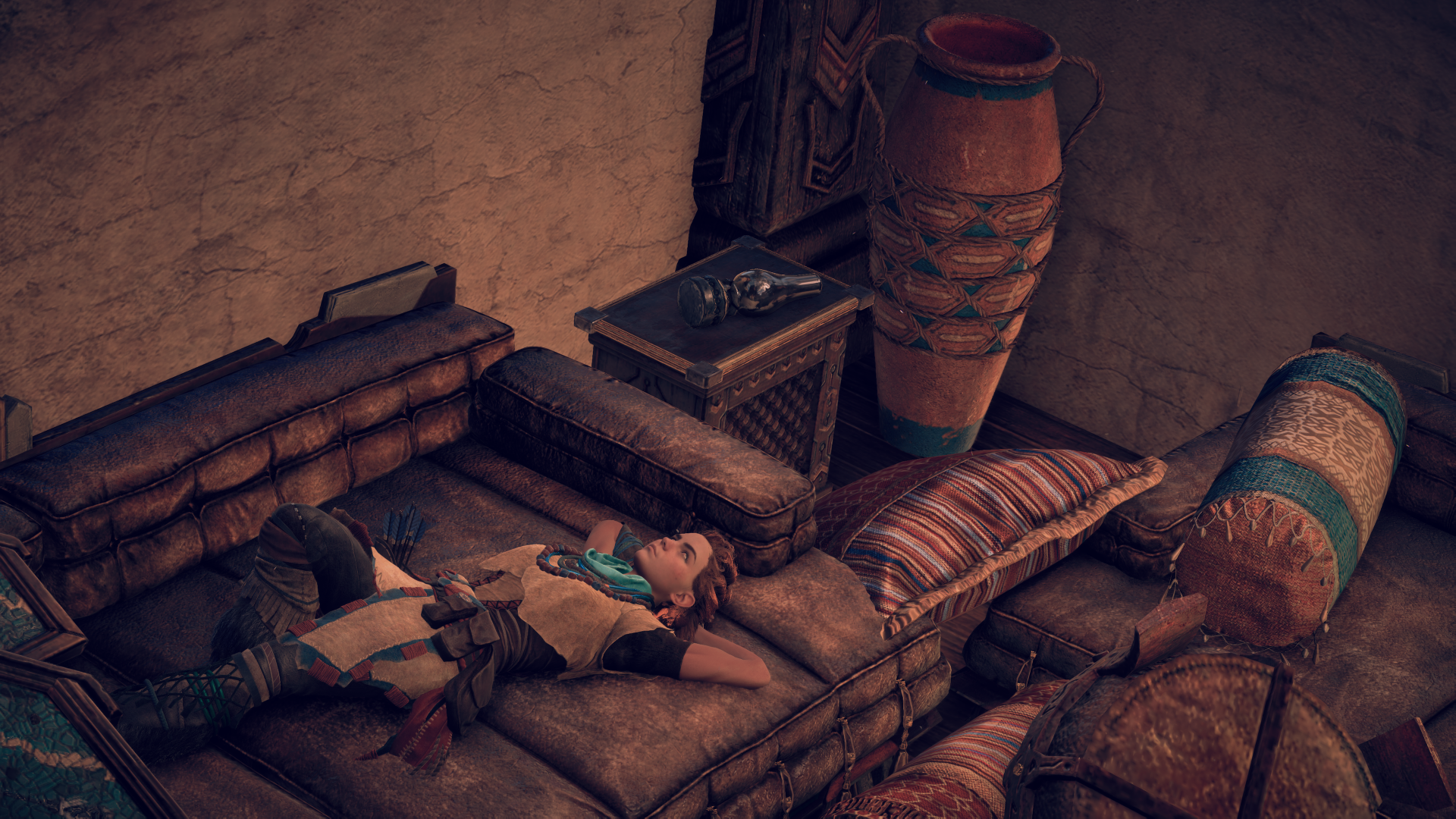 You're up late watching E3. The next big company has just started the next big conference. You see the stage. The lights dim, as the camera switches to what's about to appear on the screen. A few seconds of darkness. What you're then treated to is a shot of somewhere in the asscrack middle of nowhere. It's raining, muddy and depressing. A grizzled character comes into view, covered in dirt and scars. It's a slow burn from here on. Maybe some friendly characters appear. Maybe there's a conversation. Maybe it's just loneliness. But suddenly, some kind of enemy will attack. Might be thugs. Might be soldiers. Might be zombies. Might be something else entirely.

It's probably zombies though.

Anyway, you've just seen the new trailer for the next Call of Duty, The Division or The Last of Us. Something grim and depressing, either a warzone or another post-apocalypse scenario. E3 and similar events have a way of making it really clear how obsessed video games are with taking us to places we would never want to be at in real life. Locations where poopoo hit the fan a long time ago, and it's been nothing but catastrophe since then. Powerful, almost limitless technology being used to create the most unappealing dumps imaginable.

It's far from every game, I know, but it's common enough in big budget titles that it has me wanting more alternatives. Locations that you wish you could visit in real life, or recreations of neat ones that you actually can visit, as opposed to ones that make you go "th*nk fuck I'm not there right now". They can be either fantastical or believable, as long as they make you long to go there.

Here are some pretty good examples of what I'd love to see more of.

Hitman, the sixth game in the Hitman series, is by itself a goldmine for a blog like this. Every single map in this game has a lot going for it... except Colorado, which fits neatly into the "unappealing dump" category as well as just being the straight-up worst level in the game. But all the other ones are great. Marrakesh might not be the most pleasant visit during the events of the game, but even that map has plenty of fun little areas that makes you feel like a tourist. Paris' lounge is fantastic, Hokkaido introduced me to the idea that not all hospitals are soul-suckingly uncomfortable, and Bangkok is just a good vacation spot.

But Sapienza takes the cake for a number of reasons. This fictional Italian seaside town has the largest amount of non-hostile territory in any map, most of which consist of beautiful streets and buildings, which creates this feeling of being a tourist for a good chunk of the playtime. The stealth aspect doesn't even come into play until you decide to make your move. For the most part it's just a normal town, in which most people - visitors or residents - are unaware of all the dark secrets and mad science taking place nearby. I wouldn't go there for the underground laboratory or heavily guarded mansion anyway - I'd go get ice cream and coffee while enjoying the ocean view!

I'd watch my coffee though. Especially around bald guys.

Michel Ancel's games are so good when it comes to building visual worlds. Everything is always incredibly detailed, and the worlds his team create feel impressively packed with history and culture. All you have to do is take a look at one seemingly insignificant room in BG&E2's most recent trailer: The kitchen where Pey'j works his magic. There is tons of stuff going on in every shot. Look at the rum bottles! They're all unique, and they all look like they could be real brands. These little details each seem to tell a story of their own, and it makes the environments feel authentic. As a result, Pey'j's kitchen feels like a real place. A place full of healthy, vigorating food.

Let me try his space chili! I assume future space food is better than present day airplane food, especially looking at all the extra effort that goes into it. If it helps me sleep better, then that's a hell of a bonus. It's honestly pretty hard for me to think of a reason for not wanting to be there.

...execpt maybe all the poopoo that hits the fan by the end of the trailer. E3 trailers are pretty consistent with that.

The obvious choices for a blog like this will always be places that generally aren't particularly dangerous to the avarage person, but I think it makes sense to stretch that a bit when it comes to cartoony and surreal worlds. Like most Mario levels, Gusty Garden Galaxy is technically dangerous, but it's so far removed from reality that it doesn't matter to me. Being able to physically go to any of the Super Mario Galaxy levels would be mindblowing. That game's entire aesthetic is incredible in all the best ways, and Gusty Garden Galaxy is one of its highlights.

I'd probably prefer if the music was playing there too, but even if that couldn't be arranged in whatever hypothetical weirdo-scenario I'm trying to present here, GGG would still be a tight place to visit. Terrifying in its own way, sure, but look at how pretty it is. Think about how much fun it must be to grab those flowers and ride the wind. How about taking a bite out of one of the big apples or playing with the bunnies in the maze? That'd be nice, is all I'm saying. All the enemies are tiny and dumb anyway, they aren't a real threat to anyone. Probably.

The Great Clock - Ratchet & Clank: A Crack in Time

Ratchet & Clank has amazing world designs. Pretty underrated to be honest. So rate them higher you pricks!

We got worlds like Kerwan, Smolg, Sargasso and the Obani Moons. You might have to Bing some of those, but I think that if you do, you'll probably agree that all of them are lookers that'd be interesting to visit. But one of the most fascinating locations in the entire series when it comes to both form and function has to be the Great Clock, from the game that was almost titled Ratchet & Clank: Clockblockers. It makes me so sad that this wasn't what they went with.

The Clock is this thing that was built to keep time itself intact after some aliens overused the ability to time travel. As such, this place lets you do just that, but within certain ristrictions that I guess are meant to be safe. Still, you can make temporal clones of yourself here and use them to solve puzzles - or, in my case, high five each other a lot. I mean a lot! Though I guess the only way to do that would be to make one clone hold his hand out, then reset the thingy and have him stand there for me to slap his hand a lot. Which probably wouldn't be that great. Maybe I should get more creative... Uh, moving on!

Lake by the Ginso Tree - Ori and the Blind Forest

I can't swim for balls, so let me just add an extremely deep lake to the list. That's a good plan.

Ori and the Blind Forest sometimes feels like a big celebration of all the things that are nice about nature, minus all the things that suck. Like ticks, and sunburns, and sand down your crack. Instead we here get a big, beautiful waterfall, one of the prettiest locations in a game that's already so gorgeous that you just want to hang all of it on the wall and call it The Arts while flipping off your statue of Roger Ebert. Wait... if you hate him so much, then why do you have a statue of him? You got issues, reader.

Ginso Lake (or whatever the fuck it's supposed to be called) is first visited after an intense encounter with the big evil owl who's the villain of the game. It's a nice change of pace to be in such a relaxing place and explore on your own pace - except if you dive too far you might run out of oxygen and drown to death! But aside from that constant threat of horrifying demise, this would be a wonderful place to visit. I may not be a good swimmer, so it lacks the potential for activities that the other places on the list have, but sometimes it's enough to just be somewhere pleasant. To be left alone and able to take everything in. Make take a nap. Most likely take a nap. Definitely take a nap. Am I already getting old?

Aquadome manages to stand out in a game full of cool arenas because it's basically Rapture from Bioshock without any of the downsides. Rather than being created by a bitter but ambitious businessman and fueled by his political agenda, it's a just an underwater stadium that was built because someone thought that would be cool - and that someone was right!

I would buy tickets for anything taking place down there. Football, concerts, karate, musicals, table tennis. People setting their own farts on fire. Some guy struggling to build a house of cards. It wouldn't matter how boring the main event might be, because you look up and holy shit, it's a shark! If the event actually is something as fun as rocket-powered carball, then that's just a bonus.

I think the message of this blog is basically that, as video game settings can be literally anything, be it realistic or abstract, I think it'd be nice to see less gloomy sadness and more worlds that would actually be appealing to explore. The angsty post-apocalypses and gritty world wars being so big today is definitely a result of the inescapable movie influence games have been hit by over the years, but there are plenty of feel-good movies too. Movies get this whole thing, they have sick locations all over the place. Games have the potential to take it even further by letting you explore them, so no having more of them feels like a missed opportunity.

Hopefully the future has less mudholes and more Aquadomes, Sapienzas and space kitchens.