Ranking the Dungeons in Ocarina of Time

The Legend of Zelda: Ocarina of Time is my favorite game ever. It's magnificent, but I really don't have to tell you that. You know. Today I wanted to share with you my thoughts on the dungeons in the game. I would like to rank them from worst to best. My rankings may surprise you. Please feel free to tear me a new one in the comments for it. I will also only rank the full dungeons. It isn't really fair to compare the mini dungeons. But I will throw in some thoughts at the end for them. Let's go! 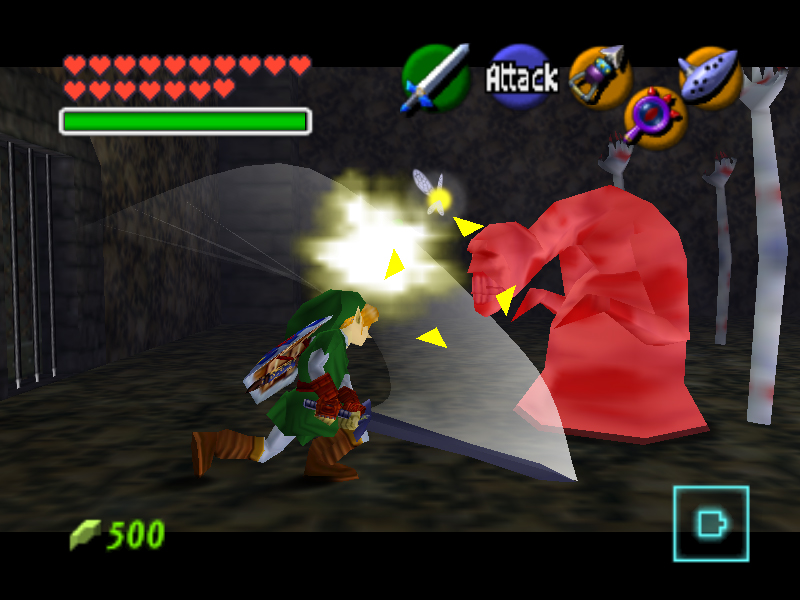 No, I didn't rank the Water Temple as the worst. It's not even close. Nothing is as awful as the Shadow Temple. It's horrid. I usually save it for last. I run in, grab the hover boots, and then go do the Spirit Temple.

I hate the hover boots. I hate the invisible crap and having to use the lens of truth. I hate the big room where you have to jump over pits with falling guillotines, and how falling into the pits takes you back a ridiculous distance. I hate the art. I hate the enemies. I hate every last fudging thing about this Temple. I will give it props for having one of the more difficult bosses in the game. He can be challenging to hit if you don't know what you're doing. My first ever playthrough of the game on my own resulted in failure against him. I ran out of many projectile weapons trying to kill him. Worst of all, I ran out of magic because the lens of truth consumes it. Every time I have faced him since, I make sure to have at least 2 blue potions and 1 fairy when I enter the chamber of Bongo Bongo. I don't have too hard a time with him these days, but he was very challenging to me as a kid.

I will plug an interesting youtube video that I recently watched that provides a theory about the origin of Bongo Bongo. It's a fun watch. 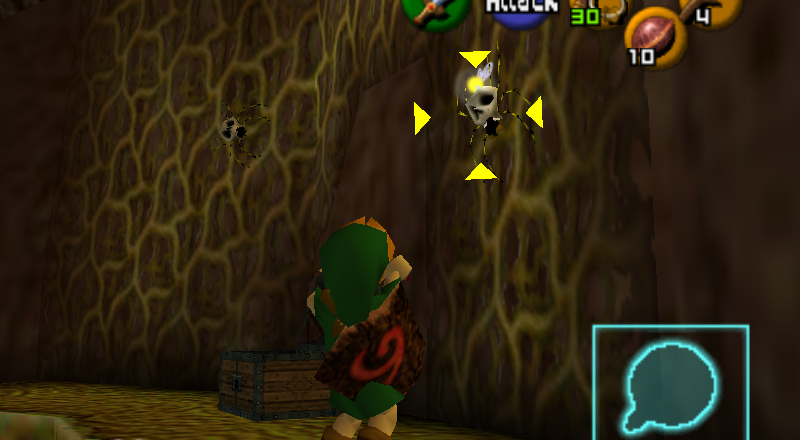 The Deku Tree isn't a horrible dungeon (the only horrible one on the list is the Shadow Temple). It's just extremely simple. The only challenging part is figuring out how to burn a web that you are standing on as the controls aren't necessarily clear upfront. Other than that, there is no challenge (not even with the boss). I get why. It's the introduction to combat and puzzle solving. It should be easy. But it's not fun to replay. Thankfully, it's very short. 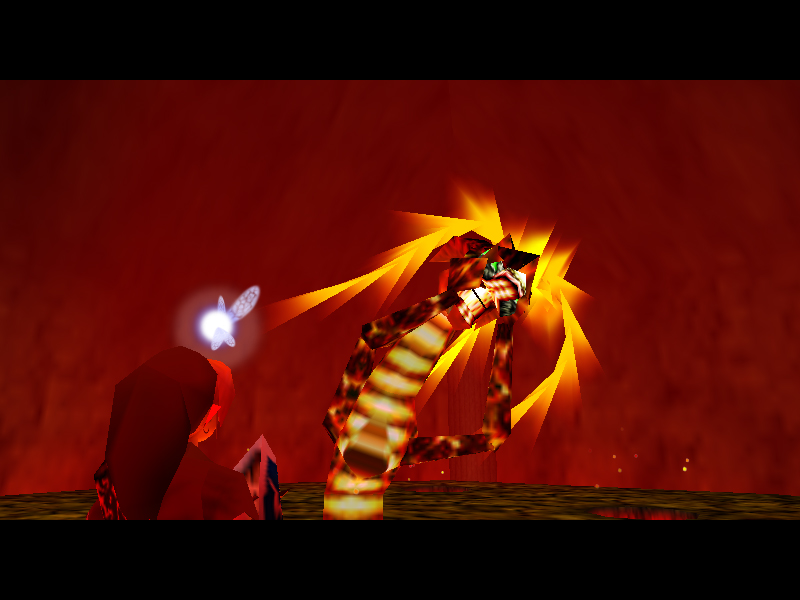 The rest of the list is ranking the dungeons from great to greatest. Putting the Fire Temple this low isn't a knock against it. It's a great dungeon. The others are just better in various ways.

I really like the music. I like that this dungeon actually has NPCs in it. It indicates that this temple is actually used by the people and not just an ancient ruin. It's an important part of their culture. I do find all the red tiring (red is my least favorite color). I dislike that you fight the miniboss twice. The maze of invisible fire walls is tedious. This dungeon does provide some decent puzzles. It also provides tension. You want to hurry in order to help save Darunia. You want to hurry to save the prisoners. The hammer isn't a great weapon in combat, but it's fun to go back and use it on things you saw earlier in the dungeon. Volvagia is an epic boss, as well. 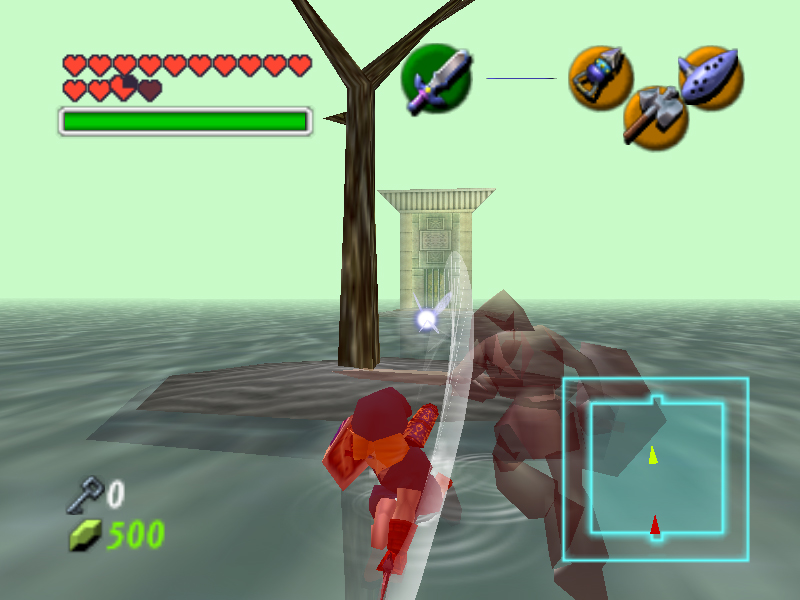 "How could you possible rate this so highly????" you ask.

I don't understand why this temple gets such a bad rap. It's a solid dungeon. I love the boss. I really like the concept of changing the entire level with the water. It's really fun. It's also very challenging. There are keys hidden all over this temple and it can be very easy to miss some. I have never got them all on my first try. I have to cycle through the water levels 3 or 4 times to find them all. I think that's why it's hated. People get so frustrated when they miss a key. But it makes replaying it fun. I cannot perfectly remember every location of every key. The game also has Shadow Link, one of the toughest enemies of the game. At least he was for me on my first time. He's a really entertaining boss in the coolest combat environment in the game. My first time ever fighting him took ages. We clashed for what felt like hours. Nowadays, he's not too tough. If you have the Biggoron sword, he's remarkably easy. I really wish that he would pull out a Biggoron Sword when you do. I'll also mention that I love the buildup of the relationship with Princess Ruto. So much sexual tension! 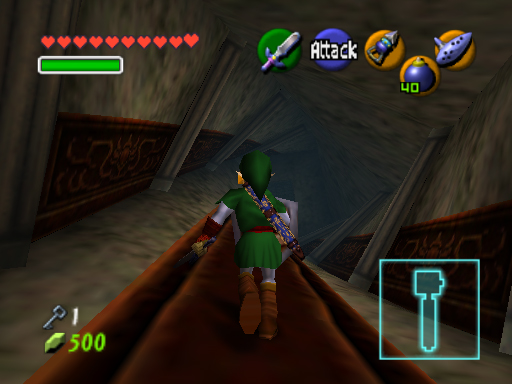 This temple is crazy. Firstly, the music is so haunting and mysterious. Then there's the floormasters that just terrify me, even today. It has one of the more difficult bosses in the game. He's harder than Ganondorf, since his energy ball increases in speed when you volley it back and forth. This level is also very confusing. I get lost in it every time. That's impressive. I enjoy the whole thing of finding the different poes, as well. It's just a super solid dungeon on the whole. 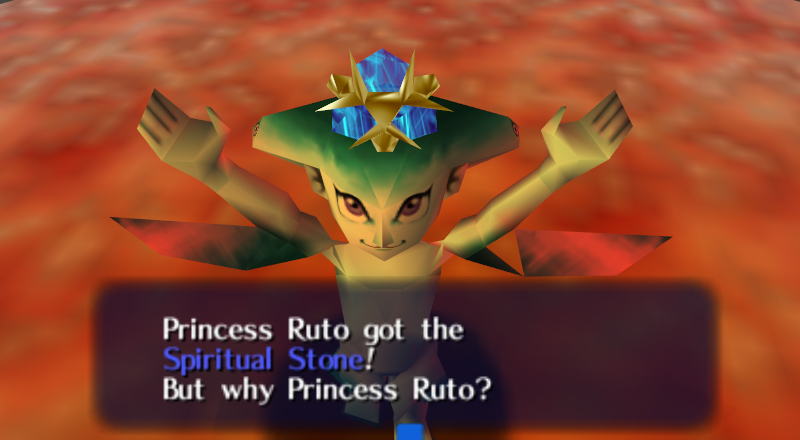 This is arguably the most creative dungeon. You're inside of a living thing. In it's digestive system. That's just cool. It's also neat to play through the dungeon with your own true love, even though she's a glorified paperweight. It has a challenging miniboss. It has a really fun (but less challenging) boss at the end. The art of this dungeon is amazing. The enemies are awesome. This dungeon oozes with creativity. I wish more of the dungeons were so interesting to spend time in. 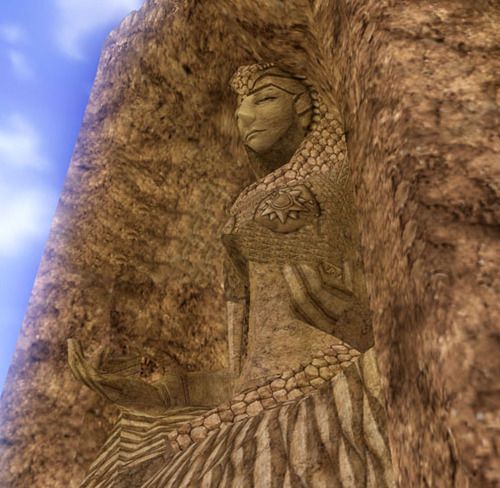 The Spirit Temple is magnificent. It is just barely in second place here. It's so good. It's the only temple that makes proper use of time travel. It has Darknuts, which are arguably the best enemies in the game. It has the mirror shield, which is a truly perfect puzzle item. The puzzles are stellar. the boss is fun. I just love this temple. I always look forward to it. 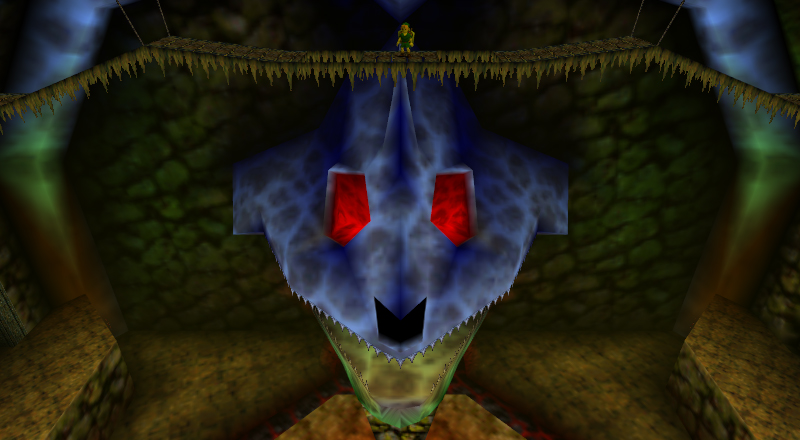 I've actually written about this before in a blog that literally only 1 person ever read (hint hint, go read my blog). This Dungeon is wonderful. Great aesthetic. Solid puzzles and boss. The best thing about this dungeon is how much it ramps up the difficulty. As mentionted previously, the Deku Tree is a really easy dungeon. This is where the game gets serious. It teaches you how the game is really and truly played. You must master a good number of skills in order to complete the dungeon and it will lay the foundation that the rest of the game will only build upon. It seems simple to us now, but to a first time player, it's a big deal. Especially considering that there had never been a 3D Zelda before this. 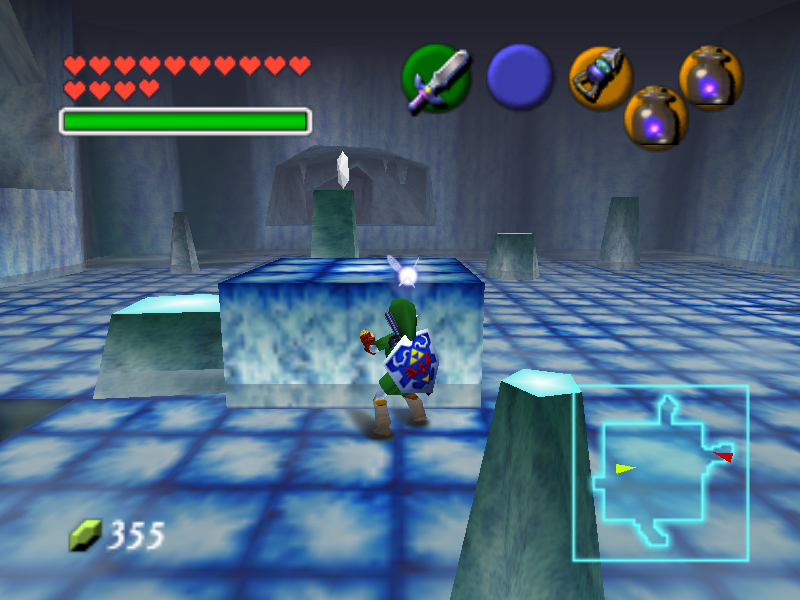 This mini dungeon created my greatest challenge on my first playthrough. It wasn't the puzzles. It wasn't the enemies. It was a door. Right at the end of the dungeon, you walk through a door. You meet Sheik and get the Iron Boots. This door was my enemy. I tried hitting it with my sword, hammer, bombs, arrows, deku stick, blue fire. I tried and tried and tried and tried to get this damn door to open. Then I noticed when I walked near it that the A button indicator said "open." This is the biggest facepalm I've ever had in a video game. Overall this is a fun area to explore. The music is among the best in the game. Puzzles are good. The only bothersome thing is transporting blue fire back and forth. 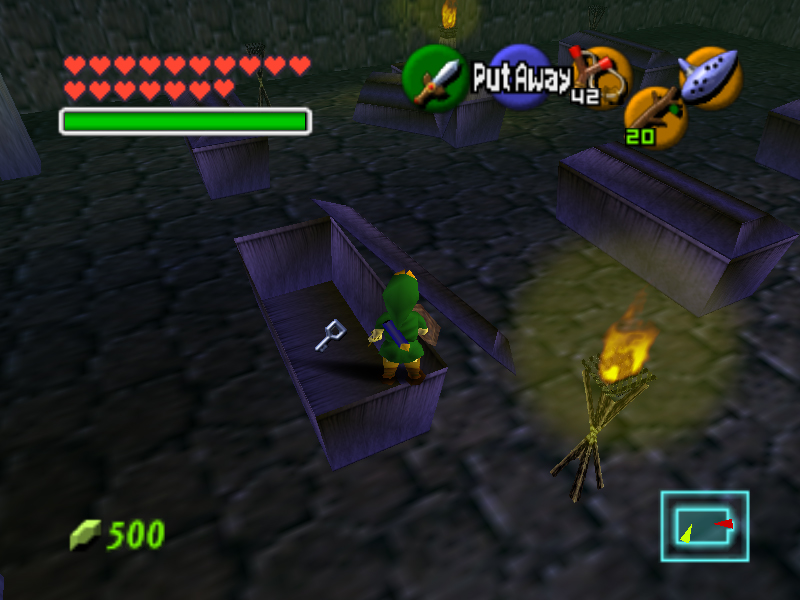 This place is genuinely terrifying to me, even as a grown-ass man. I get in and get out as fast as I possibly can. Which isn't that fast, as I often get lost. It's a very confusing place. And you don't really need to explore most of it. But you don't know that your first time going in. And then you meet the deadhands, which are the most horrific thing ever created in the history of anyting. 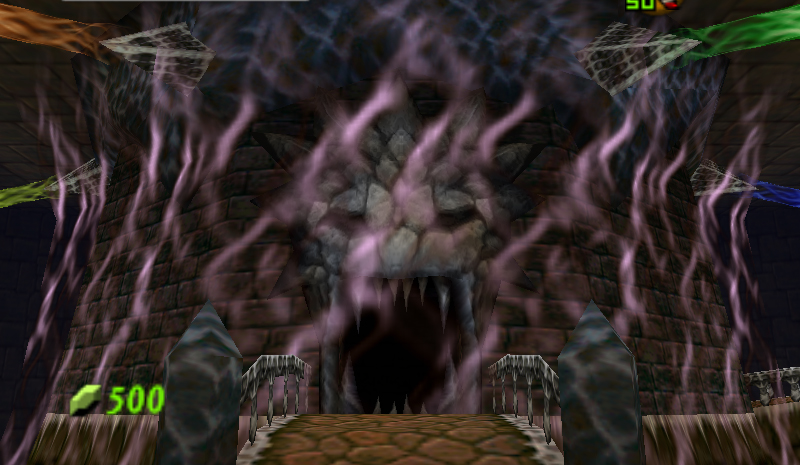 For what it's worth, I really like this bit of the game. It's like a quick review of everything you've previously accomplished. I do think that getting the Gold Gauntlets is weird. You can now lift something like 80,000 pounds, but you don't do any more damage with your sword. They also don't look as nice as the silver ones did. I do like that you are then granted access to the best great fairy, doubling your defense. You are truly an unstoppable machine at this point. I like that this dungeon allows you flexibility in the order you approach, also.

So there you have it folks! Please tell me how you would rank the dungeons and why I'm so dumb and wrong!