How to create your dragon

When the return of the Band of Bloggers was announced, I got pretty excited about writing something! But then I saw this month’s theme, and… uh… ok, please promise me you won’t ever tell LaTerry what I’m about to say, but the problem is… I’m not much found of dragons in general.

I was having a hard time thinking about which game I should play. I’ve heard Saturn emulation was finally getting good lately, so maybe I could try Panzer Dragoon? Hm, maybe. I also never finished Freedom Planet, but while the main protagonist is technically a dragon this one almost felt like cheating.

Then I had a epiphany: what if I create my own dragon in Spore and disguise it as a dragon themed game? Delightfully devilish, Churros!

So I proceeded to install the base game plus the creepy and cute parts expansion (which ended up being surprisingly useful), fired up the game and decided to pick up the most dragon-friendly looking planet, with brown grass and red oceans. I’ve tried to keep up with the theme when naming it, and considering that I was making a dragon on a spherical shaped planet, which name should I choose? Hmm… dragon… sphere? Oh wait, I got it! 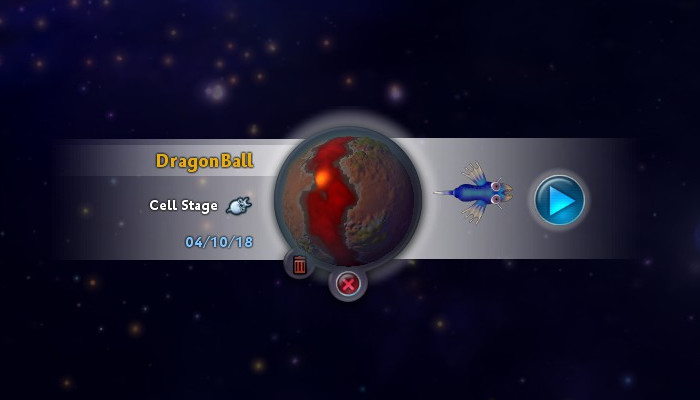 Allright, our dragon already have a home to call theirs. Being a dragon, I suppose that it should eat lots of meat, so I picked a carnivore cell to start the game. At first I tried to make the most dragon-like cell I could, only to realize that this kind of cell layout sucks. Oh well. 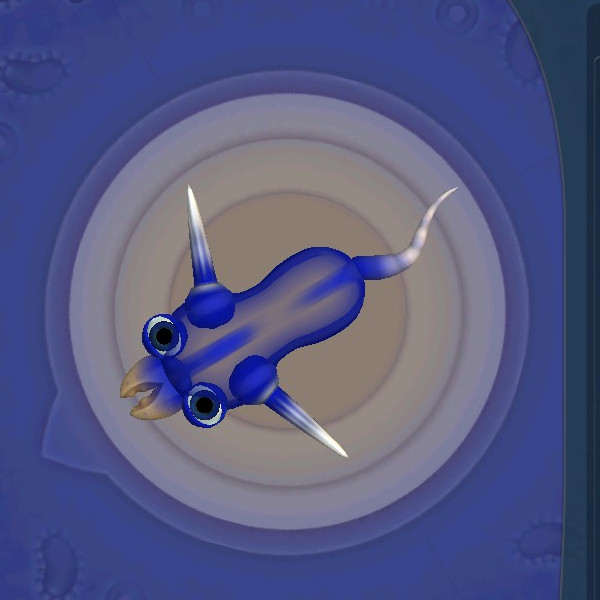 Once I gave up on making it look like a dragon, it finally became able to spread death through the primordial pond! 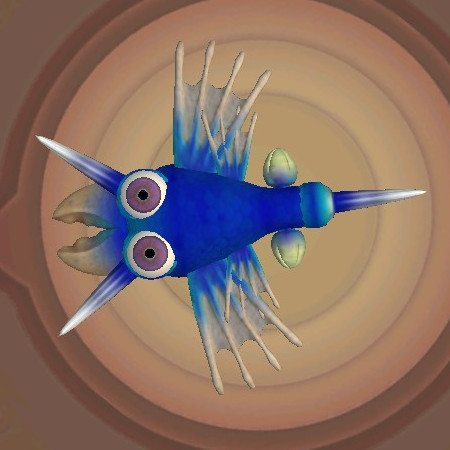 Once our lil’ dragon-like-like cell grew strong and swole the sea became too small for our murderous draconic rampage. Time to add some feet and design it so it increasingly starts looking more and more like a scaly friend. The good thing about the creature stage is that designing a creature trying to make it look like a dragon actually helps a lot gameplay wise, at least if you are trying to play as an ultraviolent mercyless species. 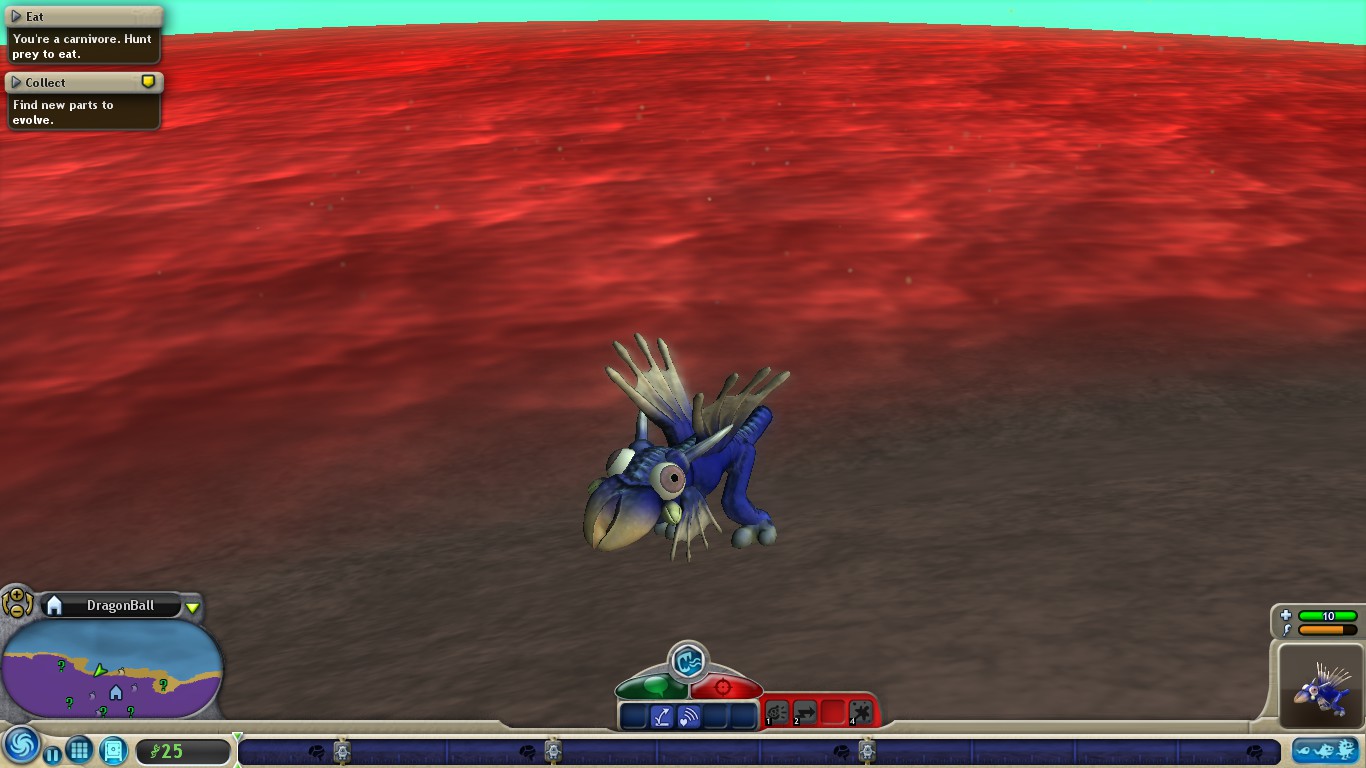 So yeah, creature stage went pretty smoothly! That is, except that one time my species migrated to another nest and I accidentally got every single dragon from my pack killed while attacking a stronger species. Oops. With my playable dragon all alone and unable to recruit more happy friends I was too weak to directly attack any nests, and considering our draconic buddy is an obligate carnivore I needed to hunt oftenly so my dragon wouldn’t starve. This resulted in me mostly avoiding combat during my migratory journey, and whenever the food metter got dangerously too low I would resort to attacking either creatures that were far away from their packs or defenseless, soft baby, and this strategy proved to be really effective! In the end tasty, tasty babies paved the way to our new home! 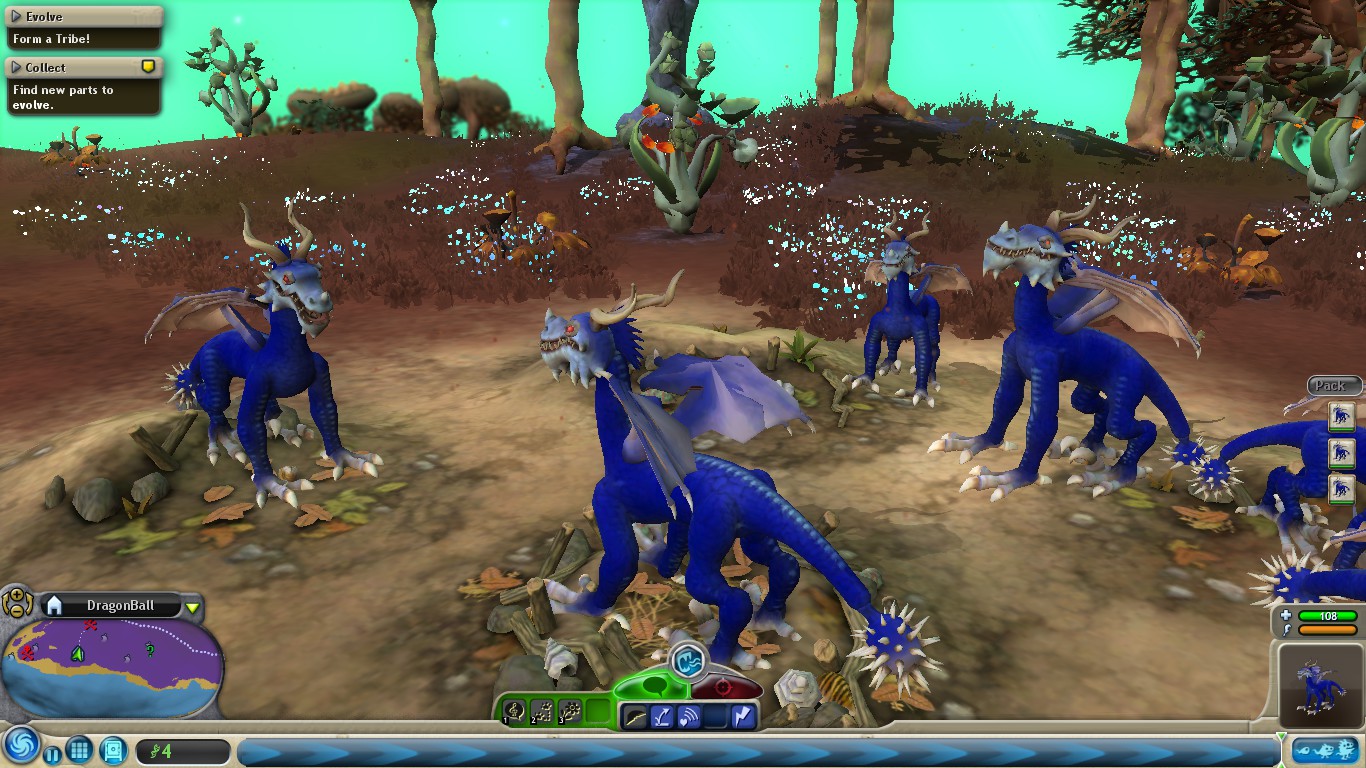 Once our dragon buddies got fully evolved I was really happy with the results. It really looks like an actual scally, violent, evil dragon! Time to proceed to the tribal stage. I must confess that the tribal stage is my least favorite gameplay mode, and the fact that there aren’t any customization options besides clothing makes it even worse to me. But hey, at least my dragon is rocking a mighty mustache now! And as my species don’t have hands it now holds tools with their draconic mouths, which looks dumb and adorable. 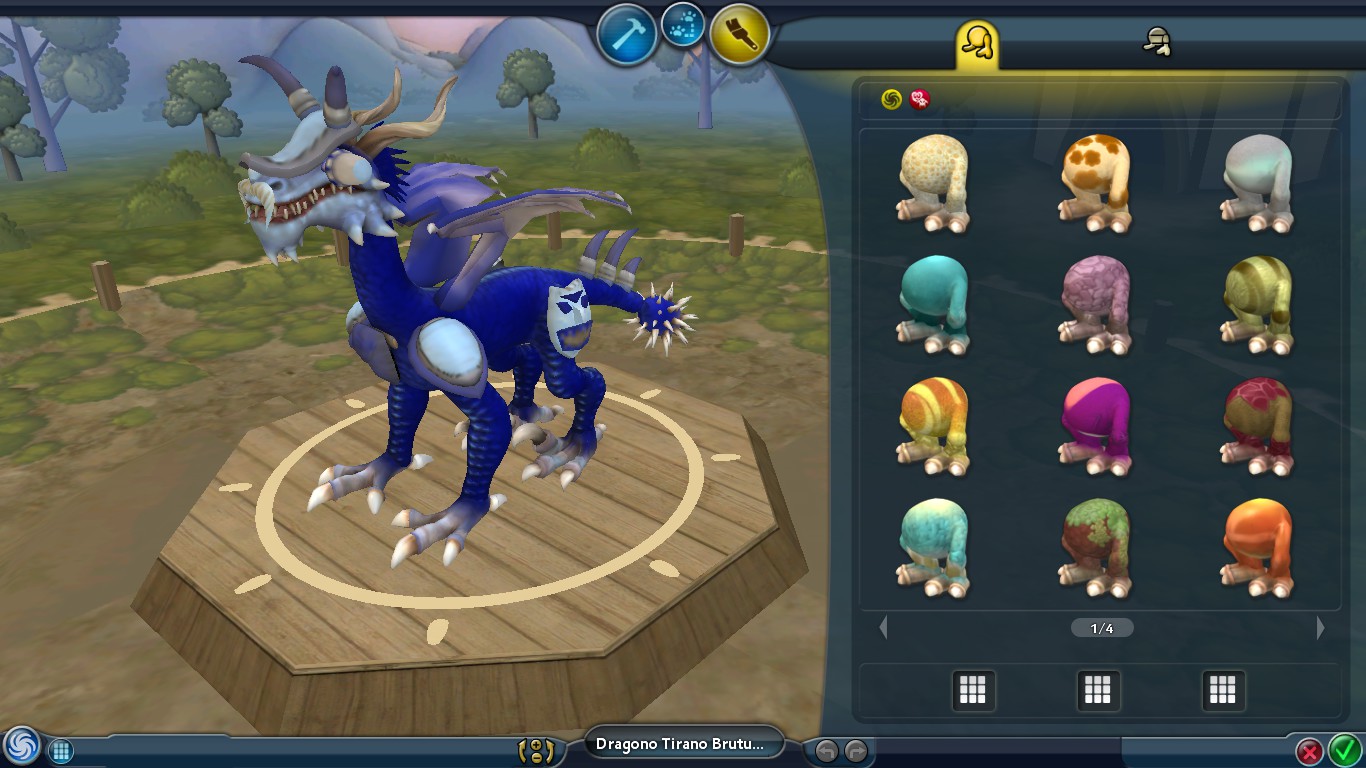 Tribal stage was pretty calm too, and by calm I mean “extremely violent and gory, where every other tribe were killed to their last member with not even a single children being spared”. Hunting for food was tedious but easy, and by the end of this stage I luckily found an epic creature that another tribe had already previously halved its hit points. This easy kill granted more than enough food until we reached the civilization stage! 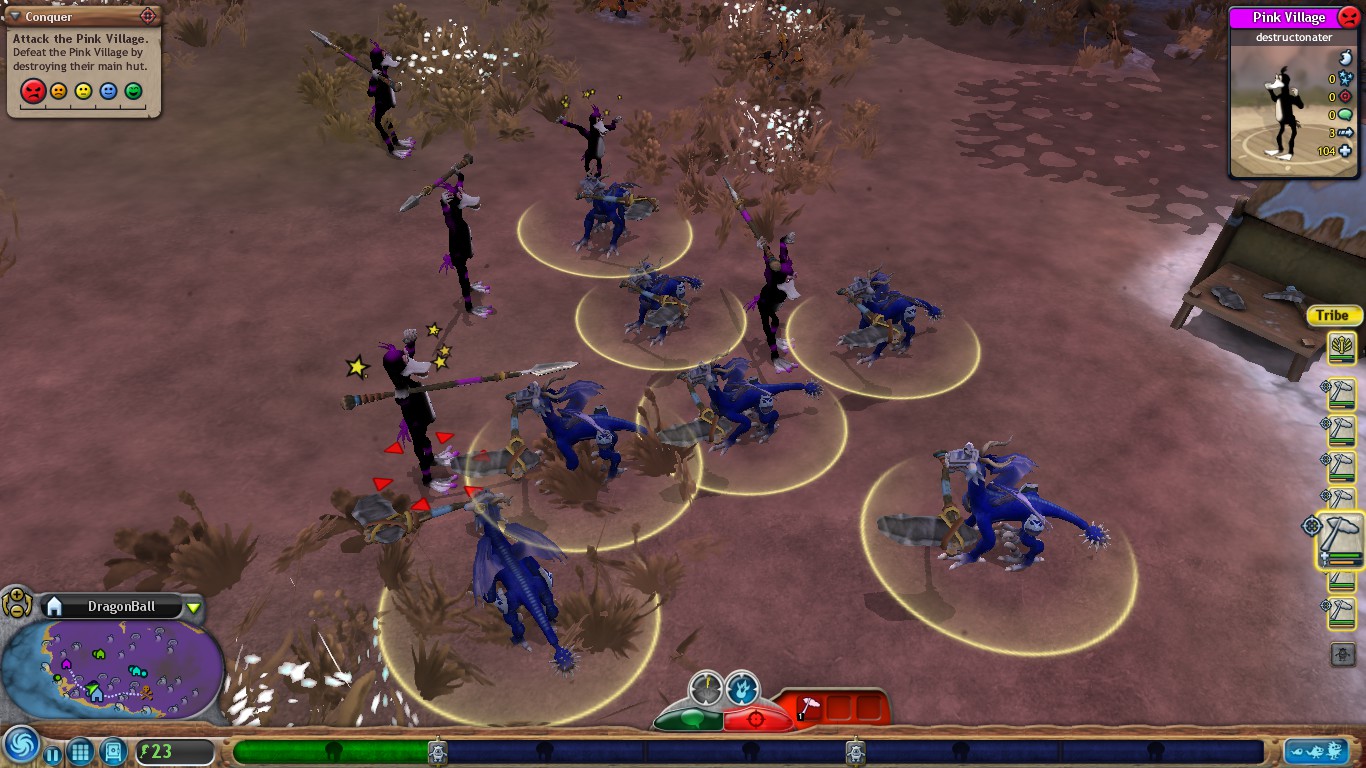 So after killing a few off-brand Bugs Bunnies and Daffy Ducks (I'm not even kidding), we were ready for the beating of a million drums, the fire of a million guns, the mother of a million sons: civilization. 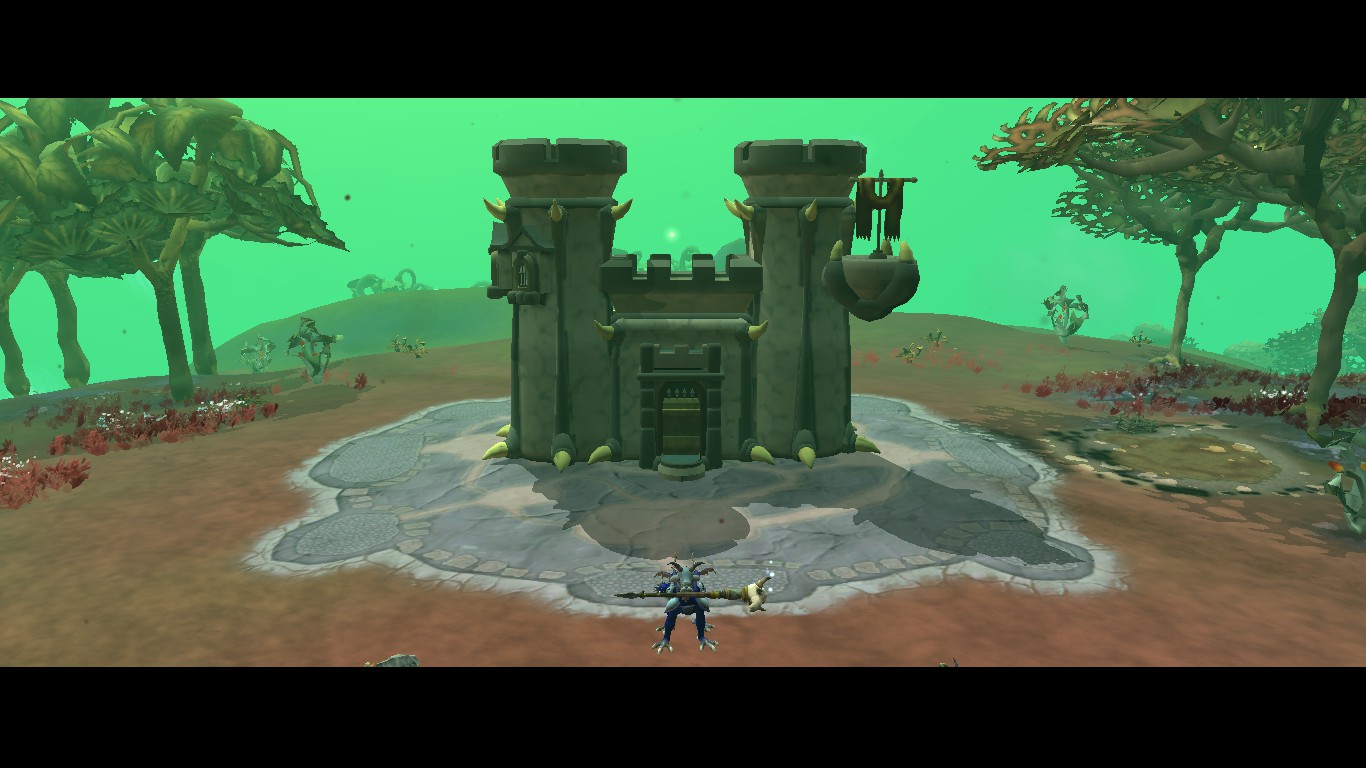 While gameplay wise this stage is pretty messy, I freaking love this it because you can customize pretty much everything: buildings, vehicles, city layouts, etc. So the first task of this stage was building a prefecture, so nothing more fit for our dragons than a menacing looking castle. I also proceeded to build everything else styled like medieval-ish stuff. An ideal place for dragons to live, work and reproduce like rabbits. Dragon-rabbits. 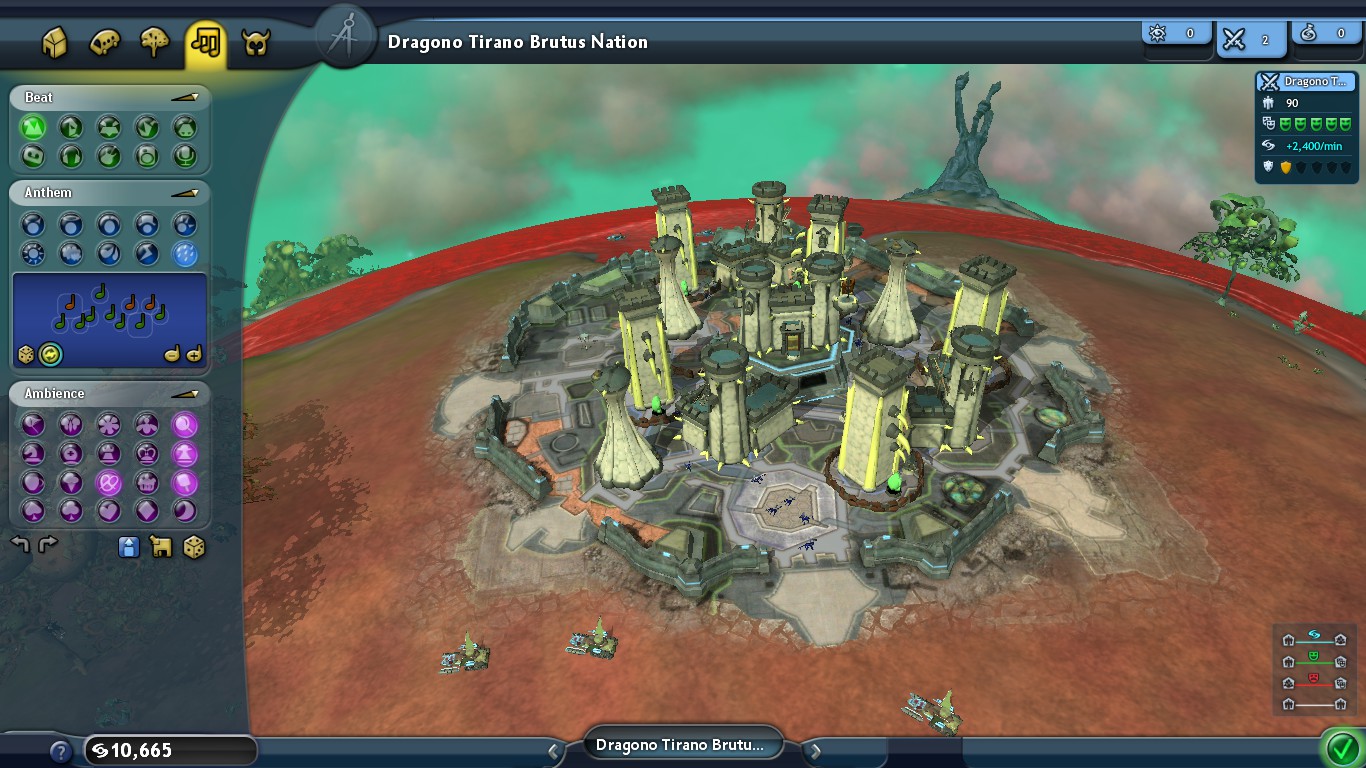 Next step was designing our mighty military vehicles. As our initial city was located on the coastal area I was able to design both the land and aquatic military units right away. I’ve tried to give them a little dragonish touch to them, because why not. 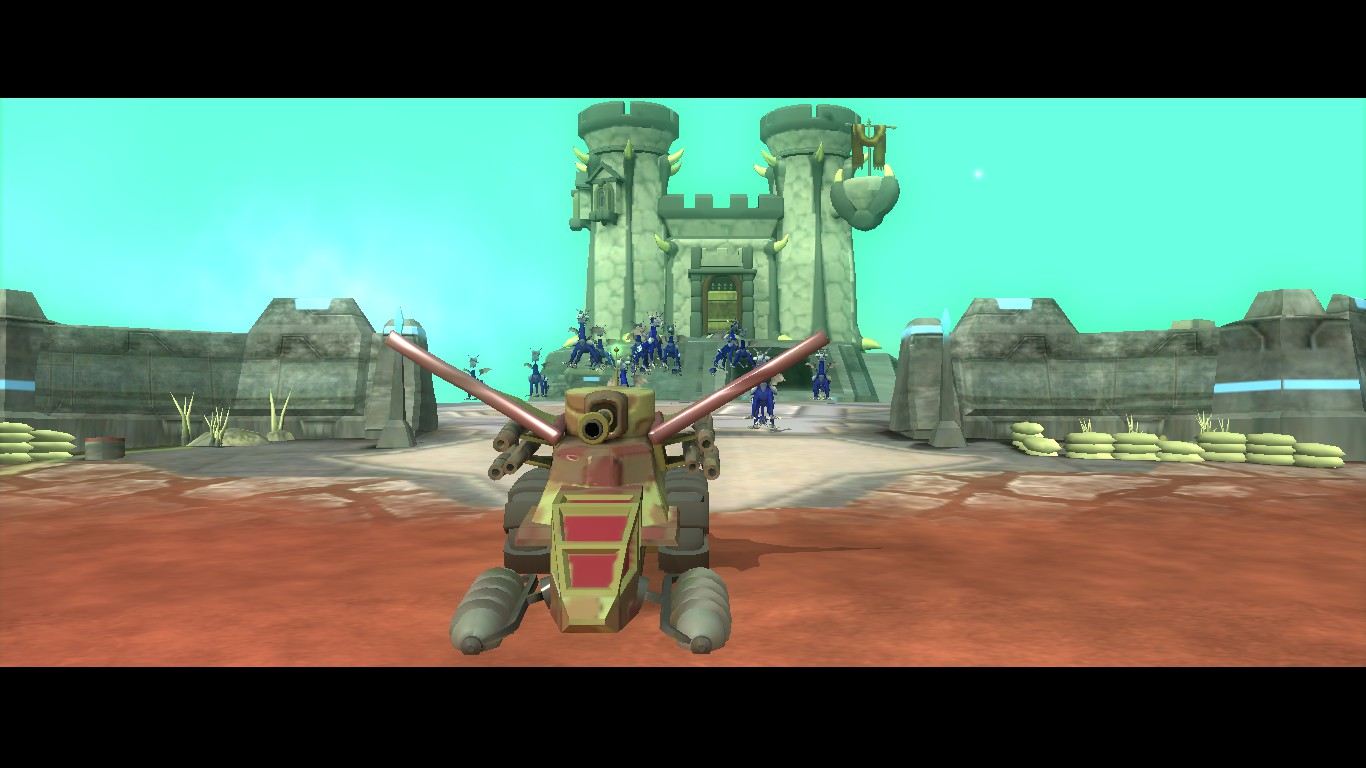 What happened then was a race for the unclaimed spice geisers, followed by a very messy, very slow crawl towards global domination. One problem I have with this stage is that it starts with you having to deal with 6 or 7 rival cities at the same time, having to be aware of their locations vehicles, claimed spice geisers, etc. At least it gets a lot more manageable once there are only 2 other enemy cities left. 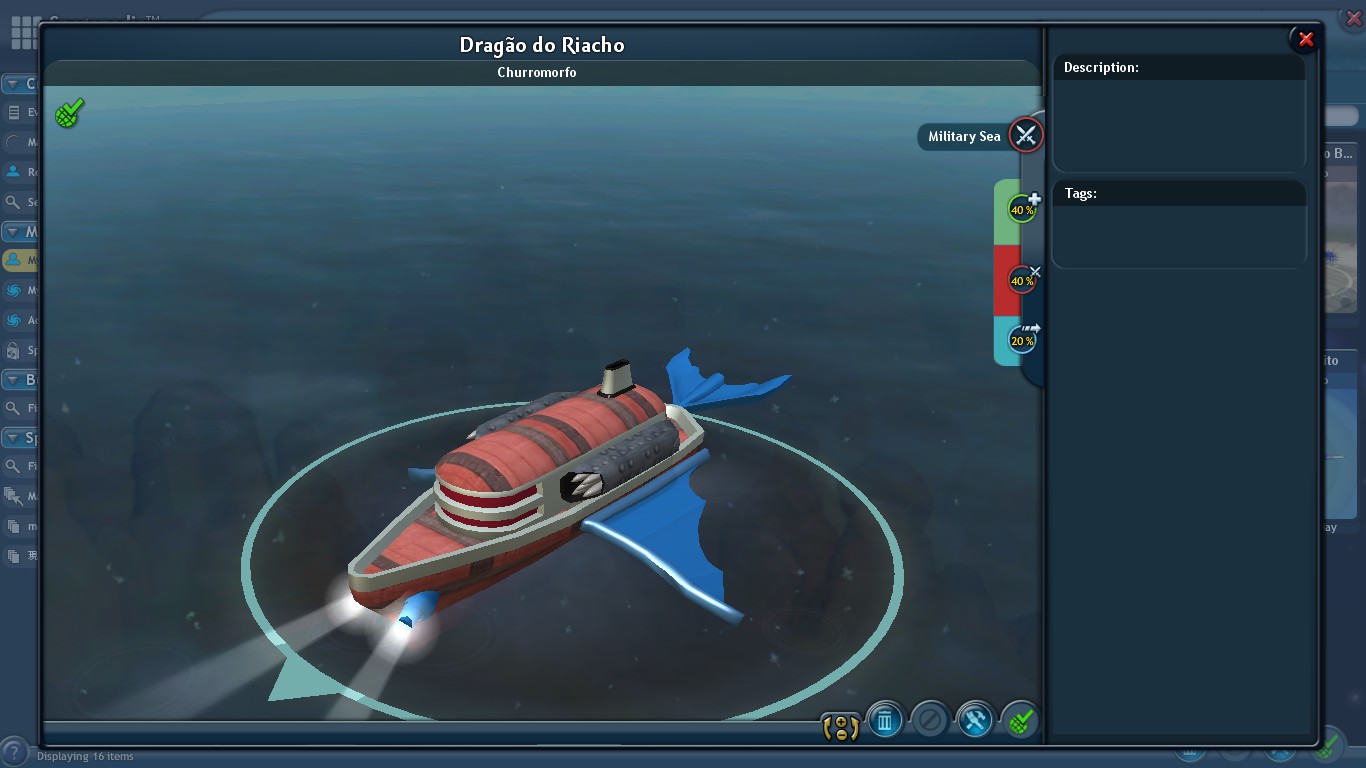 The strategy here was the usual bread and butter for our winged lizard fellows: kill, destroy, murder, burn, repeat. Although this time we are at least rebuilding those cities afterwards, so I guess we were not THAT bad, huh? Besides, this is the only other stage were the other two options to violence are as much evil: you can either attack and opress the other cities economically, to the point they are forced to accept your aggressive Vivendi-styled buyout offer, or you could dominate and subjugate the other cities culturally and religiously. There aren’t good intentions paving the road of global unification, no matter which method you choose. 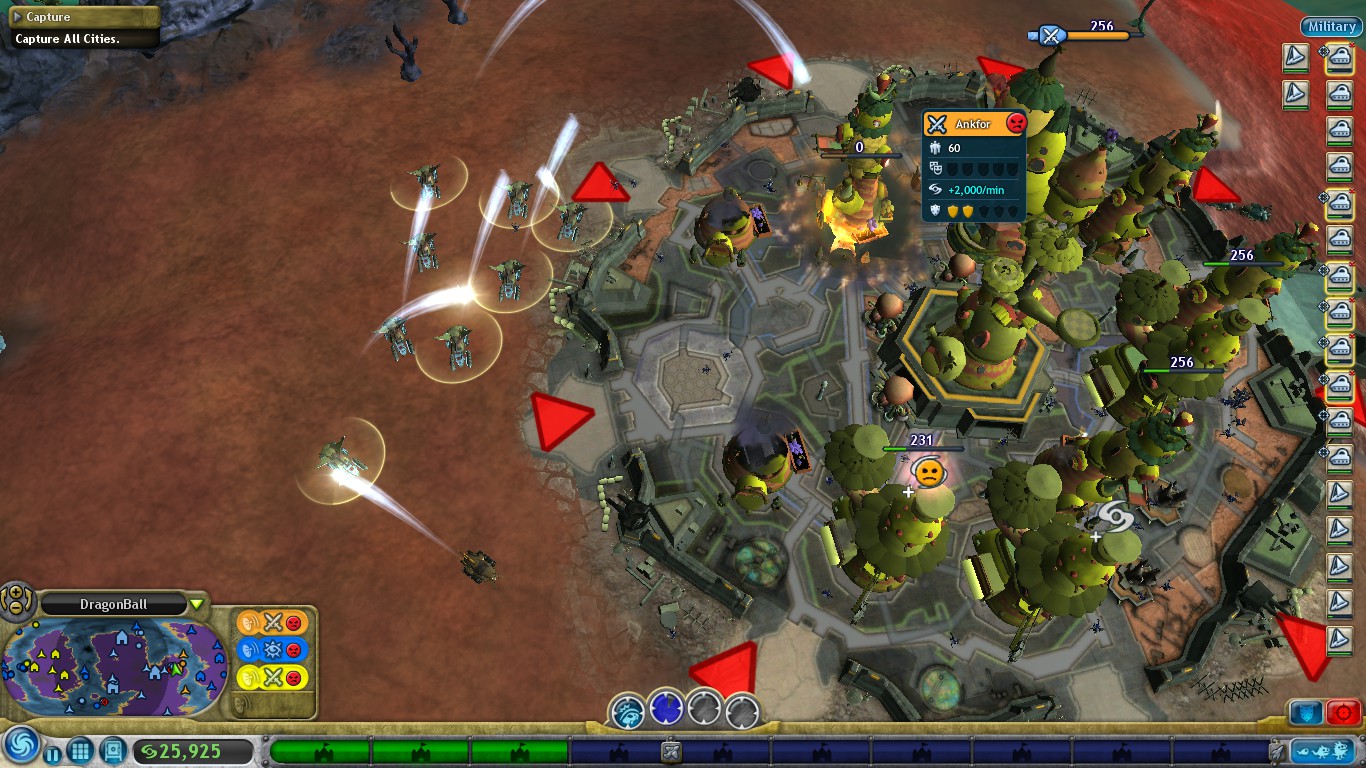 As our nation progressed through this conflict-filled era, we slowly started unlocking more offensive skills. Throwing a mighty bomb moments before starting a vehicular offensive was a great way to wear down the enemies. I even unlocked another more powerful bomb, the gadget bomb. Ok, same as before, let’s bomb the place before sending our troops and…. Oh… We already took it over only using the bomb? Sure, let’s add some buildings and… wait, why can’t I remove these smoking piles of rubble?

Wait, did I just used a nuclear weapon on this city?!?

Welp, there was only one clean building slot left, so I’ll put an entertainment building there. At least they are a little bit happy now, I guess? See, being nuked wasn’t that bad, am I right? 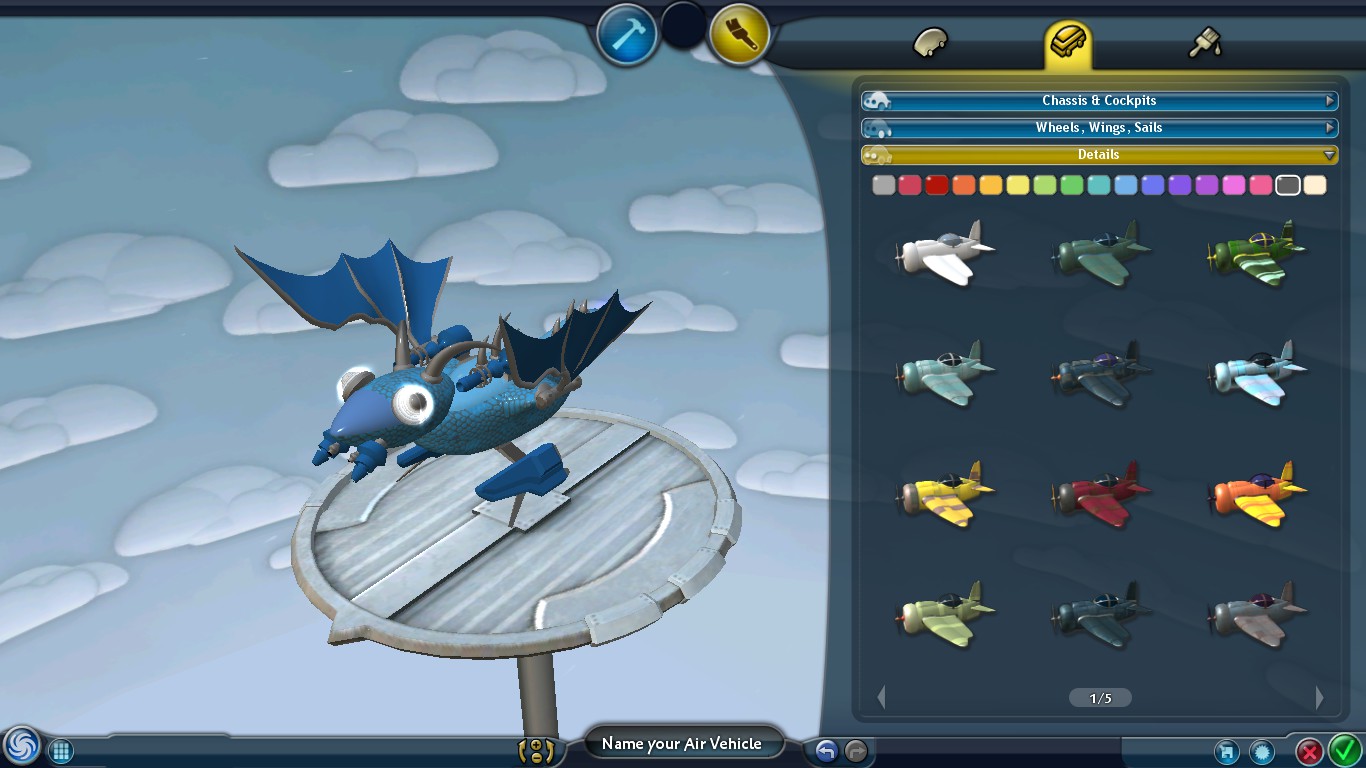 And then I finally unlocked the airplane! Time to build the military airship our people need and deserve. 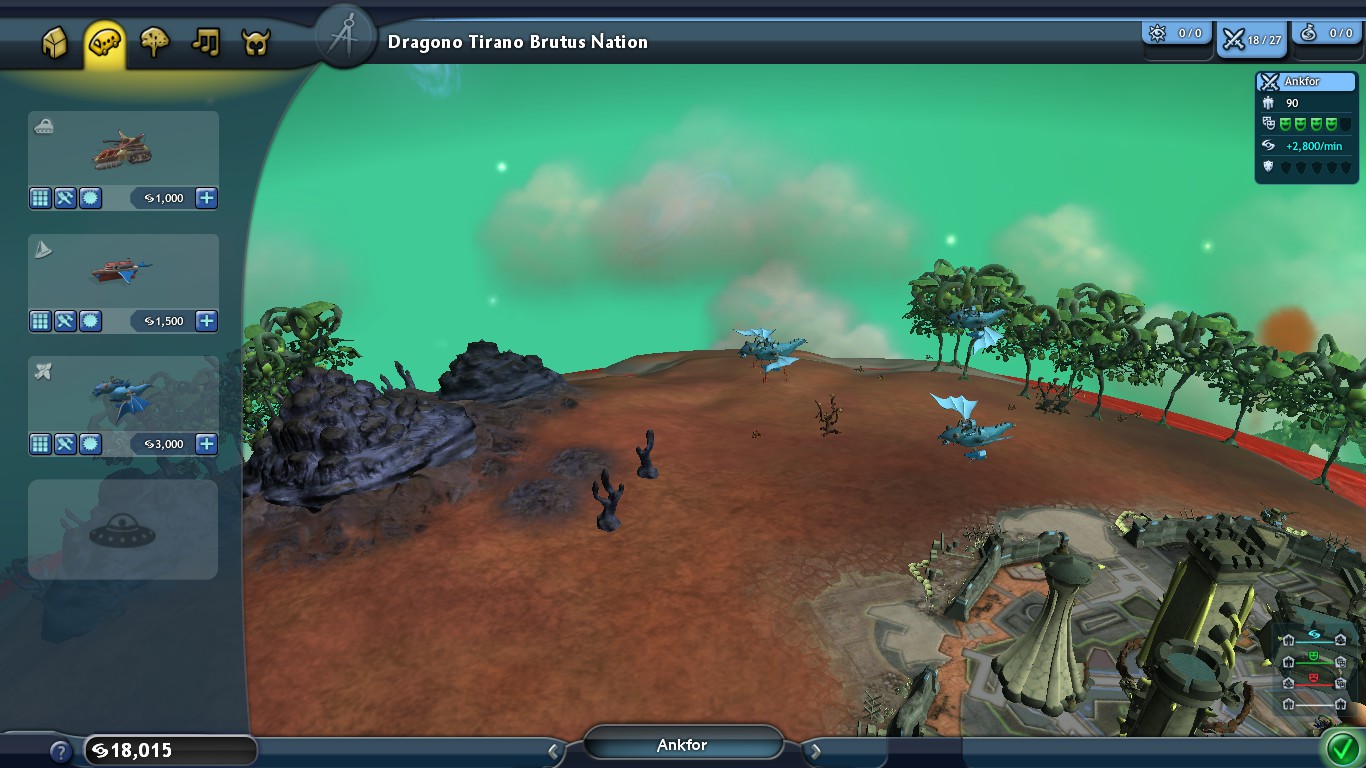 The last bit of the civilization phase was a lot more chill. Bomb some people here, send some dragonplanes there, and then in a incredibly smart move the last city surrendered. Our lizard-people are united, at last! Now it is time to craft our spaceship and spread the power of love, friendship and incredible violence through the whole galaxy! 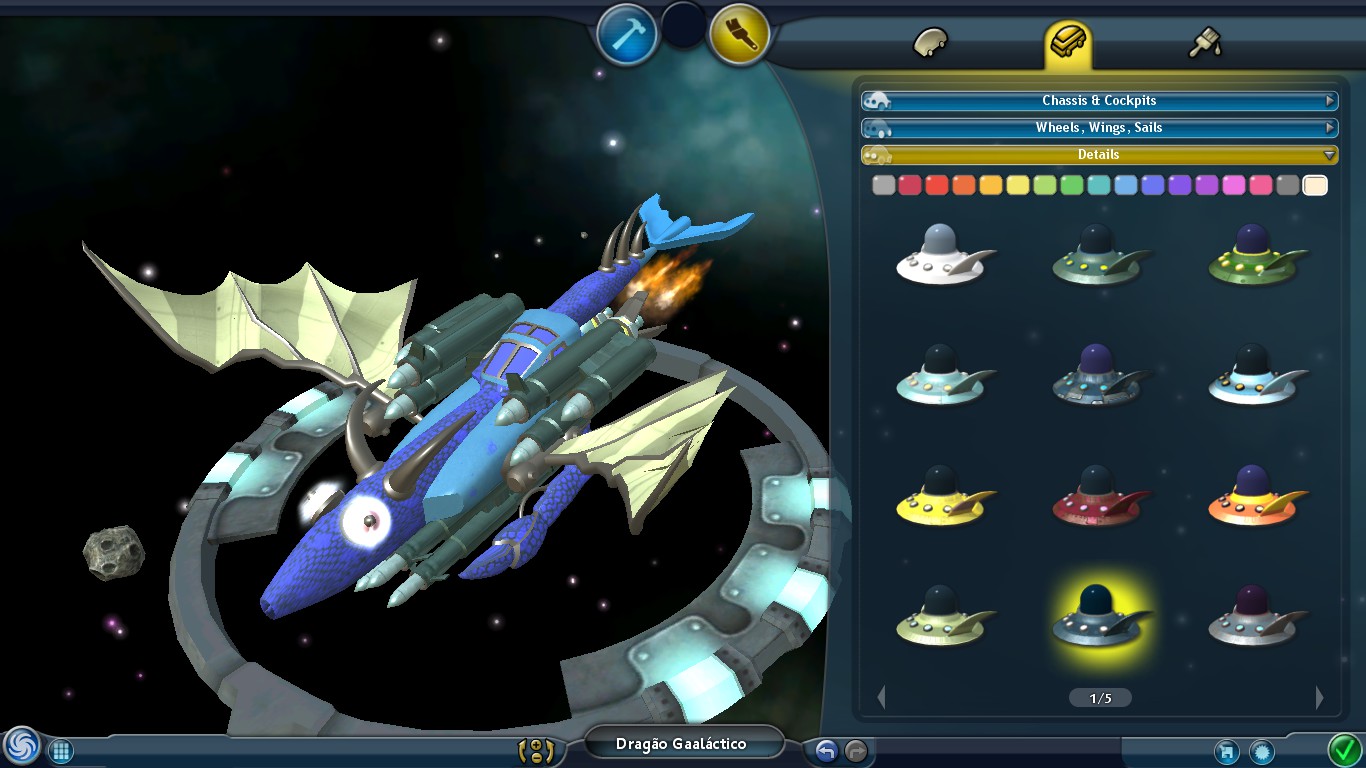 One small nitpick I have towards the game I realized at this point is that the further you go into the game the less important is how part positioning affects gameplay when constructing your playable character/craft. Part positioning during cell stage can mean the difference between life and death. During the creature stage the limb and part positioning isn’t important anymore, but at least it affects the creature animations, which is pretty neat. On tribal stage you only got to pick some boring clothes for your creature and that’s it. When creating land/water/air vehicles on civilization stage the part positioning doesn’t matter at all, but at least the parts you include affect a percentage counter that defines its stats (health, power and speed). Finally, in the space stage the way you build your ship or the pieces you use doesn’t matter at all, which I find kind of a bummer. Well, at least it also means that you have total aesthetic freedom to make your ship look however you like, I guess. 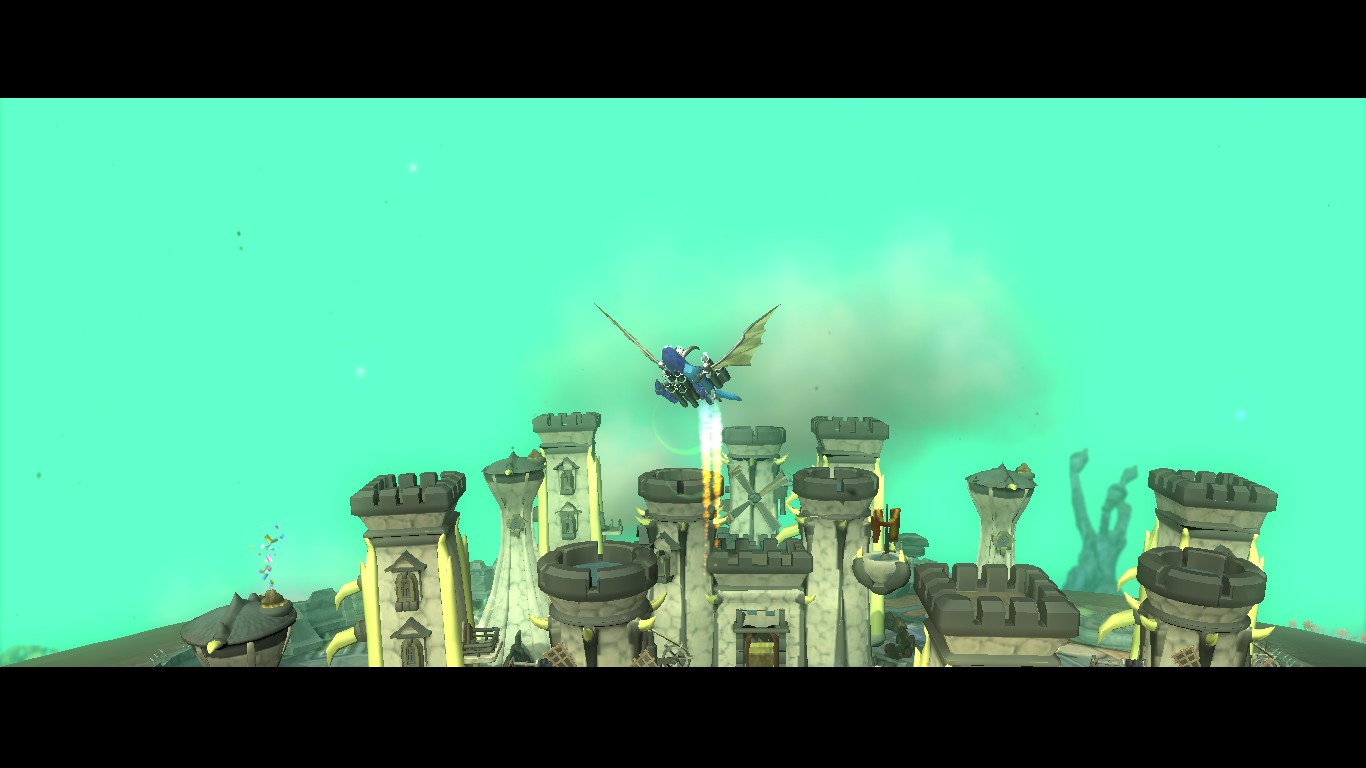 I’ve never played the space stage before: usually I would only play until the end of civilization stage and stop playing because… uh, I guess it is because I usually just stop playing games for no reason at all? Anyway, so far I’m really digging the space exploration: finding barren planes, some of then in really weird shapes, searching for intelligent life (only found one early civilization so far, feeling tempted to blow them up), and trying to figure out how the colonization mechanics works (so far I had fun transfering alien lifeforms to a planet and creating a very basic ecosystem). Oh, and I also found a weird cubic planet on  my starting system.

I thought that all these initial stages took a good amount of time and I was finally at the end of the game, but it looks like I’ve barely scratched its surface. While this blog is approaching its end, my draconic adventures in space are only starting. With the vastness of space comes infinite possibilities and new ways to be the evilest, angriest reptiles this galaxy has ever seen. 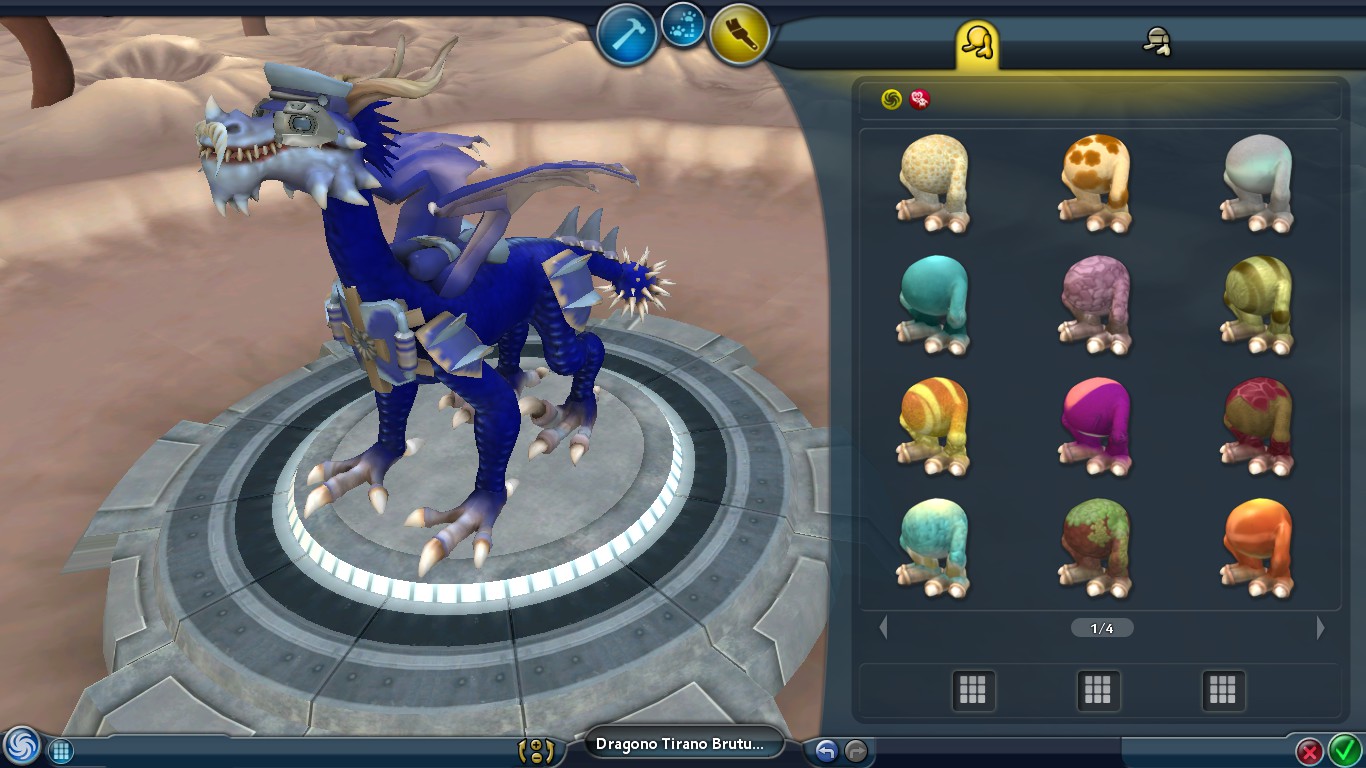 Update: in case anyone wanna add these creatures to their game, you can subscribe my sporecast at my sporepedia page here. Unfortunately it is missing a few vehicles and buildings because it doesn't let me add them for some reason.