The Will to Keep Playing Chapter 3: The Lab

Picture this: you’re watching a fighting game tournament stream. You see two well-known players using their characters at their full potential and showing off what they can do with them. After that, you go online or local and try to imitate what they do in the game without any practice… and lost because you kept dropping that same combo.

You then think back to yourself, “How can they do it, but I can’t?” It’s simple: That player spent his time in the lab trying to perfect his combo and learn more about the characters in the game.

When we’re talking about The Lab, we’re actually talking about Training Mode. Training Mode can be called by several different names such as Practice Mode, Hyperbolic Time Chamber, The Dojo, etc. For the sake of this blog, we are going to refer to it as The Lab.

The Lab is a great place to actually learn the basic fundamentals of the game. You can explore what your character can do in terms of combos, frame data, defense, oki, and more. It is a place where you can hone your craft as a fighting game player.

Here’s a common issue that is known around certain players that are having a hard time leveling up in fighting games: They are in The Lab and they don’t know what to do. For this segment, I’m gonna break it down on what you need to work on, starting with the obvious one for beginners.

If you never played a fighting game before in your life, I would recommend starting off in Tutorial Mode to learn how the game is played. Games like Virtua Fighter 4 Evolution and Blazblue for example have a robust Tutorial Mode to help new players understand the mechanics from beginners to advanced. Once you do that, you should have an easy time during your matches. Or at least I hope so...

For beginners and those looking for a pocket character to use, you can use the command list to get a better understanding on how the moves work. Be careful when selecting a character because certain characters have moves that are quite difficult to pull off.

Take Akira from Virtua Fighter for example. Akira is known to be the hardest character to master in both Virtua Fighter and DOA because most of his moves require good execution, such as his frame knee and his Guard Break of Doom for example. The frame knee is done by K+G (H+K in DOA), removing the guard button after 1 frame.

If you do come across difficult part of a character’s command list, I suggest practicing it several times until you get the hang of it.

Another thing I want to bring up is that understand what each move does in terms of spacing, juggles, anti-airs (for 2D fighters), safe moves, etc. In other words, you have to have a reason why you are using these attacks. I’ll cover the frame data stuff later.

Combos can range from easy to difficult, depending on the character’s command list. It is one of the essentials for a fighting game to have. Combos can be damaging, flashy, long, short, easy, difficult, etc.

When it comes to combos, it can be very easy to drop them, which can mess up your flow. In order to maintain a finished combo, do at least ten reps on each side starting with the basic Bread & Butter combos, or BnB for short. When you feel comfortable, try another combo. Rinse and repeat.

Practicing the same combo over and over again allows you to improve on your muscle memory, so that you won’t be able to drop your combos as much as often. By the time you memorized the combo, you should have no problem using it in tournaments.

Learning From Your Mistakes

So you got your ass kicked badly by your opponent because you had no idea how to beat his character. Right now, you’re either saying: “This character is trash!”, “Stop spamming!”, or my personal favorite: “That character should be removed from the game because he/she’s cheap!”. Hell, you’re probably doing this right now:

News flash: It’s not the player’s fault. It’s YOUR fault.

Here’s what most players do after a loss: They go into training mode with their dummy, and they try their best to figure out how they can beat that character. They do this by using the recording feature option (or in some cases: a repeat action option) and they pick out a move that they have an issue with. This is so that they can understand what they can do to punish the opponent’s mistake.

This is where studying frame data comes in. You want to know what move is punishable on block, as well as what move has faster startup frames. Some games such as Virtua Fighter, DOA, and Mortal Kombat for example includes a frame data screen, whereas the FGC has create mods and apps for certain games that don’t have that feature. T7Chicken, a frame data app for Tekken 7, is one of them. 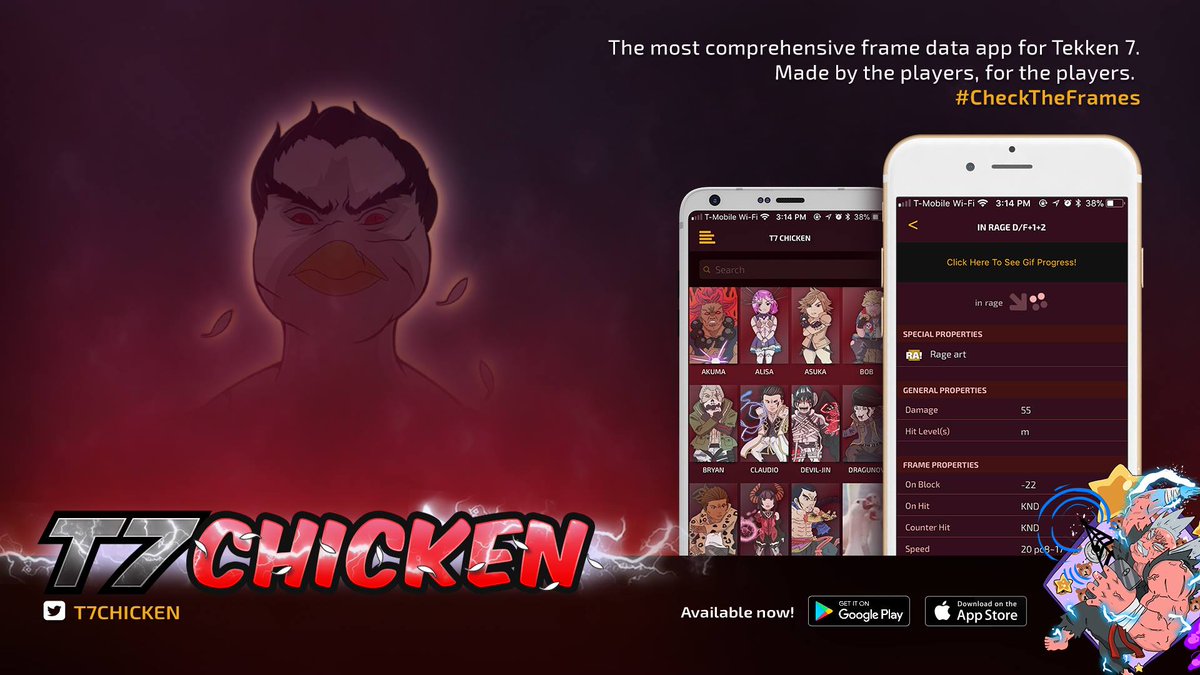 Make sure you make the opportunity to actually learn from your mistakes while you are in The Lab because those who don’t learn from the past are doomed to repeat it.

Now that you got the hang of the fundamentals in fighting games, it’s time to take it to the next level!

Leveling up in training mode is quite the chore, but it’s a fun one. Take the time to learn stuff that you have never done before such as fuzzy guarding, learning okizeme (i.e.: what to do on wake-up), understanding the importance of stance switching in 3D fighters, frame traps, and more. I say this because the quest to GIT GUD is not an easy one.

It’s great to use training mode to actually get to know your flaws and all, but there is one thing to remember. To quote Bruce Lee:

Yep. Boards don’t hit back indeed. Hitting a dead target doesn’t mean you’re gonna hit someone that is going to resist to your attack. You’re gonna have to do more than just combos and spacing. You need to bridge between what you do in the lab and what you do in local/major/online events.

If you have a local partner with you, play a couple matches with that person. He lives far away? Take it online. Also, you need to play everyone you meet in casual matches. You are a main JRPG character. You need the experience points to level up.

Got it? Good. NOW GET TO LABBING!

I’ll end it with the usual catchphrase: Until next time… Train Up, Fighters!