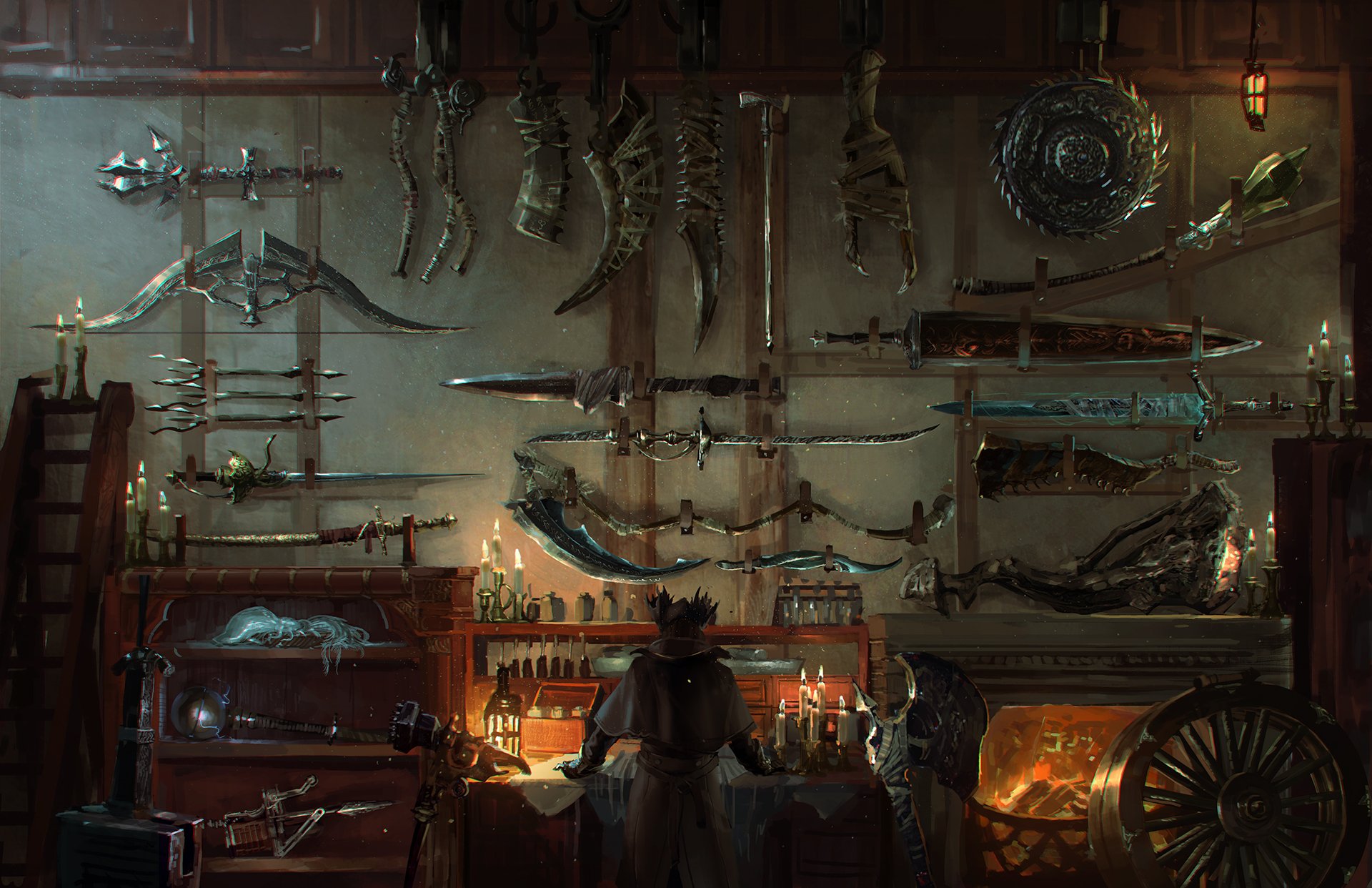 One of my favorite things about Monster Hunter has always been the absurd weapons you can craft, based on the different monsters you can hunt. Not only are the models great, but the names are nuts too. Typically, Monster Hunter games with a G-rank feature some truly inspired and powerful weaponry. For example, the last game I played with G-rank, 4 Ultimate, had weapons like the Livid Griscannon, Rogue Sedition, Stygian Superbia, and the Ukanlos Skycleaver! Look at those words I just typed out!

While there's no G-rank right now, which means the weapons reach an awkward cap, this is still Monster Hunter, and there are still absurd weapons to craft and collect. These are some of my favorite weapons that I currently use in the game, standing out as an example of how long you can play this game if you get curious about using different weapons in the game. 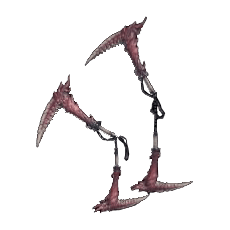 First is the dual blades I've already gone on record stating to bemy favorites, Sin, the Odogaron model dual blades. Odogaron weapons are notably the only weapons with natural white sharpness, currently the highest quality sharpness in the game, letting you cut into nearly anything in your way along with an unmentioned 30% damage modifier. Sin is an example of a finesse weapon, with low raw damage but high critical chance and white sharpness, lending itself as a weapon that trades brute strength for technical edge. On the exact opposite end of the spectrum are the Diablos Clubs. Cause, dual blades that are literally clubs. Diablos weapons are the posterchild for brute strength and barbaric power. These things have the highest raw damage in the game. Even fairly low sharpness don't do much to hold its power in check. I tend to prefer affinity builds to go along with Master's Touch builds, which grant unlimited sharpness on critical hits. The clubs tiny sliver of blue sharpness goes a long way, especially when coupled with its sheer power. Twin Nails are the sole dual blades in World with a dual element. Combining the power of Daora's freezing winds with Teostra's explosive flames creates a unique pair of blades that both freeze and explode in use. My preferred Master's Touch build is able to magnify the natural powers to great effect with its natural increase in elemental damage and blast power. The Nergigante Decimator Claws, like all Nergigante weapons, fit on any build no problem. Long blue sharpness, high raw, and moderate dragon power create a pair of dual blades that come out of the box, ready to rend any monster regardless of your armor and skills. Bazelgeuse's awesome dual hatchets, the Bazelhawk Rookslayers, are one of my most powerful weapons. It combines the power of the Decimators, with the white sharpness of Sin, and the blasting power from Twin Nails. These weapons require levels of Handicraft to get said white sharpness, but the end result is a pair of dual blades stronger and just as effecient as any other, even without extra levels in attack up or critical boost. I only have one switchax but its a doozy. The Ax of Demons is a Diablos weapon, so you know it has overkill raw. The meta of Monster Hunter World revolves around Weakness Exploit, so -30% affinity means nothing to keeping its awesome power in check. Combine with the elementless skill, and this weapon becomes my go to speedrunning weapon with an insane amount of DPS in sword mode with power phials. I typically use this weapon together with handicraft and Xeno'Jiiva's razor sharp power to make its blue sharpness carry the damage to great lengths. My love affair with Teostra's Emblem goes back a long way since 4U. This sword and shield lacks the raw but makesup for huge blast ratings. Teostra's Emblem is capable of exploding a monster 5 or 6 times whereas most blast weapons can only do it 3 or 4 times. Despite the gunlance existing, this is a weapon Megumin would be proud of. The story behind the Barroth Club is simple: lengthen its blue sharpness with handicraft then pack it with elementless and this weapon literally allows you to bash monsters' faces in like they're made of paper mache. If you didn't know, weapons without an elemental effect benefit from a 10% flat bonus in damage and the Barroth Club has some of the highest raw you can find to multiply that 10% with. It's straightforward but it's hilarious to see in practice. I own exactly one hunting horn and it's the Bazelreid Rookslayer. Just like the Bazelhawks, this weapon benefits greatly from handicraft. Just like the flying bomber himself, the Bazelreid takes no prisoners with its skillset. It can boost allies with Attack Up XL first and foremost. I prefer using it with my Vaal Hazak armor set with recovery speed up 3. Combined with the Bazelreid's own recovery speed up song, you'll be spending a lot of time at full health for Peak Performance to kick in, or at least use very little potions if any. Destruction's Fusillade, Nergigante's heavy bowgun, gives power and ease of use in exchange for capacity. Since its reload speed and recoild are fine, my favorite way to use it is as an enourmous shotgun. Just slap on a shield, guard 5, and two close range up mods and watch the damage numbers roll out with spread 3. Normal 3 can be used when monsters are obviously not close enough for optimal shotgunning. The Anjanath's Gnashing Flammenkanone is basically a light machinegun, capable of suppressing fire with a beefy attack value and huge normal shot capacity. You have 9, count'em, 9 normal shots to absolutely perforate anything in your path. If you can want a lot of sustain, the Anja HBG is king. The Legia Shattercyst is the king of piercing shots. Eight whole piercing 2 shots and six piercing 3 shots allow you to punch through the beefiest monsters in the game like Bazelgeuse or Xeno'Jiiva. If the monster is big enough, the Shattercyst can make short work of them and prove bigger is not better. Magda Geminus II is basically the game's bazooka. With a clip size of three for both sticky 2 and 3, keeping the crafting recipe on the radial shortcut allows this weapon to spit an assault of explosives constantly with a pile of blastnuts keeping your ammo topped up. Griffon's Blazooka isn't particularly amazing on paper. The Anja cannon and Legia rifle both the same job with larger clip sizes. The difference is that this Diablos HBG has the dubious honor of being able to utilize elementless, like the rest of its Diablos brethren. Since the Blazooka is incapable of firing anything good asides from normal and pierce, this already powerful gun is afforded an additional 10% bonus. Lastly is my favorite light bowgun, a class of weapon that works best when you liken it to a submachine gun. Odogaron's Karma is an example of one of two bowguns. There are bowguns with amazing damage but rough handling, so you install quality of life mods like reload speed and recoil dampeners. Karma is an example of a weapon that handles like a dream, so you can afford to slap on three close range up damage mods to really pump its damage up. Combine with the highest natural affinity of 30% and this weapon can achieve some crazy deeps with critical boost helping out.

And there you have it, most of the weapons in my equipment box in Monster Hunter World. All these images were from the Monster Hunter wiki, so you can easily search that site for your own favorites and share your own choices down below in the comments! Happy hunting everyone!