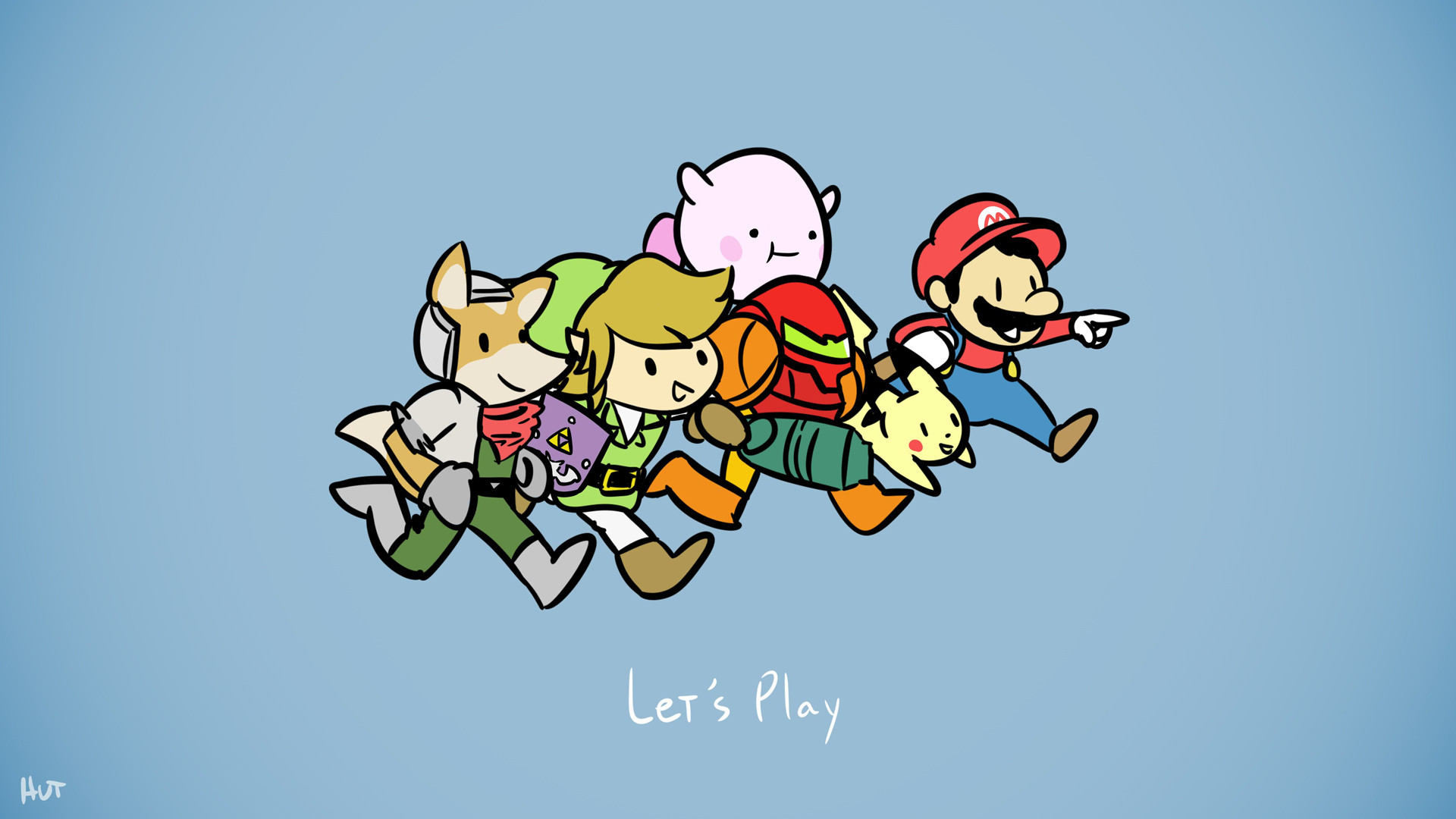 I’ve been playing fighting games competitively for years now. I competed in mostly 3D fighters such as Dead or Alive, Virtua Fighter, and most recently: Tekken. Hopefully, I will add SoulCalibur VI to the mix once the game comes out. On top of that, I’ve been enjoying Dragon Ball FighterZ lately, and I can’t wait to see this game in tournaments.

Outside of fighting games, I started expanding into another form of video game entertainment by entering the world of Let’s Plays. For those that don’t know what that is, Let’s Plays is a style of entertainment in which we provide video game playthroughs, usually with commentary.

While I do enjoy watching tournament videos of certain fighting games, I actually enjoy watching Let’s Plays. I was introduced to the genre when I watched 1Press2LP’s compilation of The Runaway Guys playing Mario Party for the Nintendo 64. That opened up to me watching Proton Jon, Chuggaconroy, and NintendoCapriSun’s solo channels. It escalated to watching Versus with Josh Jepson and Attacking Tucans (Tyler Sederwall), MasaeAnela, Super Gaming Bros., and more. Watching those guys made me get into creating an alternate channel dedicated to Let’s Plays, which has been out for about a year now.

The reasoning why I started doing Let’s Plays is because throughout the course of 2016, I forgot how to have fun while I was competing in fighting games, and I was also stressed out because I was focused too much on winning as well. I stated it during Chapter 2 of The Will to Keep Playing series where I started doubting myself as a player.

Before creating the second channel, I had to watch several Let’s Play videos from Chuggaconroy, ProtonJon, Super Gaming Bros. and also Tom Fawkes to see how they made their videos fun and exciting. Chugga’s videos are usually my go-to source because he provides useful facts that I didn’t know about the game that he was playing. ProtonJon also has his “Future Jon” segments that provide hilarious/insightful stuff. SGB also have their special editing, such as replays and hilarious moments occur.

The biggest key is that all these guys were informative and entertaining during commentary, which is what I’ve tried to go for. They also practice the games that they will be playing for their channel, although Let’s Players Curse is a thing. Let’s Players Curse is basically this: no matter how hard you practice, you will fail during a recording.

Another video I watched is the This Is How You Don’t Play series on DSP. Let me explain why. In every stream or video that DSP has done, he provides the DON’TS of Let’s Plays. I’ve seen cases where DSP fails a simple task, rudely makes fun of the game (unless if it’s bad), or even worst: rage quitting. He has rage quitted several games such as Persona 3, Megaman X6 (even though I felt that the game is ass imo), and others. It’s not just fighting games.

One thing that separates the others from DSP is that guys like the one I mentioned play games and make videos for fun. DSP, on the other hand, does it for money. When I was at The Runaway Guys’ Post-Thrown Controllers Panel at MAGFest, Chuggaconroy said that the best Let’s Plays are done by the games that you enjoyed playing. He’s actually right. The games I play for this channel are to have fun. Even though I don’t have many subscribers right now, I do this for fun, not for a paycheck.

The first video I did a Let’s Play on was the unreleased Sega Genesis port of Ninja Gaiden. It was over 40+ minutes long, and I was using XSplit Gamecaster. The issue was my commentary was barely there and the gameplay felt as if it was out of sync. That started my One-Off playlists. Then I did Dynamite Dux and Dr. Langeskov, The Tiger, & The Emerald, all done on PC.

By the time I got a Nintendo Switch, I started my LP on Blaster Master Zero. By Part 11, I changed to using XSplit Broadcaster, which fixed my sync issues. Since then, it’s been my go-to for recording, next to OBS. It took longer to finish because I ran into problems such as having issues with the microphone, scheduling was off on my end, among other things. I also ran into technical difficulties such as issue with video and there was a time where I forgot to turn my mic on for commentary. It was messy, but it lasted 15 parts.

When Sonic Mania came out, I loved playing the game so much. It was the first time in years that I gave a Sonic game so much replay value since Sonic Adventure 2 Battle. I spent days trying to find the first seven Chaos Emeralds in the first two levels of the game. I started doing a Let’s Play on Sonic Mania, and I did three runs of that game: one with Sonic & Tails, one with Knuckles, and last one with Knuckles & Knuckles with the alternate ending. I spent a total of 55 hours playing Sonic Mania, which is the same hours as Mario Kart 8 Deluxe.

As of right now, I just finished playing Sonic Forces for the channel. I chose to play this game for two reasons:

I did the playthrough for the main story, followed by Episode Shadow and extras. For this format, I developed an schedule to upload videos every Monday, Wednesday, and Friday, which will be used for future videos later down the road. My next project after Sonic Forces will be… well, you’ll have to see for yourself.

Collab Let’s Plays are a dime-a-dozen. I always wanted to do one, but I don’t know other fellow Let’s Players in Maryland. I need to learn how to get better at networking because I feel very reclusive when I promote my stuff.

In terms of dream collabs for certain projects… I would love to collaborate with The Runaway Guys (or either Chugga, ProtonJon, NCS separately), Tom Fawkes, Galm, Chilled Chaos, Aphex, Super Gaming Bros., PKSparxx, MasaeAnela, SuperJeenius, and Josh Jepson. Hell, I would love collaborating with Super Beard Bros. with Alex and Jirard, or Super Couch Fighters with Brett and Santell.

I learned a lot during my time making Let’s Play videos. In terms of the recording and editing process, I made sure of these things…

Once I got the rhythm going, making videos became fun and easy for me.

How I Applied My Let’s Play Knowledge Into Fighting Games

So now comes the question of “What does fighting games have to do with Let’s Plays”. Allow me to explain: I recently mentioned earlier that 2016 was the worst year I’ve ever experienced in terms of competing in fighting games. Of course, I was met with criticism that I don’t practice hard enough, or I don’t play enough.

Now I know what you are wondering: What does any of this have to do with Let’s Plays? Well, it has to do with one thing that I was missing while I was playing video games: FUN.

When I was competing in fighting game tournaments, I felt like I wasn’t confident in myself to a point where I stopped having fun. That presented a problem because I kept holding back during matches, didn’t play as much casuals, all because I was afraid to fail.

Few months ago at NEC, I managed to redeem myself in DOA by going 2-2, and competed in my first Tekken 7 tournament where I went 0-2. Despite the losses, I actually had fun with the tournament. This was due to my experience with Let’s Play videos, alongside with labbing with my characters and playing more people in fighting games.

When it came to Let’s Plays, I managed to learn how to have fun and not be afraid to fail. I applied it to my performance in fighting games. When I did an blind LP on Blaster Master Zero, I failed so many times in certain areas. I even had my fail moments in Sonic Mania where I accidentally died in certain areas during my Sonic & Tails run. I even struggled against the Uber Caterkiller boss on Knuckles’ run. Hell, I died seven times on Stage 29 of Sonic Forces for being a whore for Red Star Rings.

Whenever I announce the next LP, I usually leave out cryptic hints for the audience to keep guessing. It was something I picked up from Chuggaconroy when he was promoting his next project. I gave the answer away on Destructoid, but not everywhere else.

With that in mind guys, the next game that I will be playing for my Let’s Play channel is none other than… SoulCalibur Legends.

The reason why I chose this game is because since SoulCalibur VI is coming out this year, I’ve been meaning to give the spin-off a second chance. The other reason is that I needed a change of pace since I haven’t done a Let’s Play on a hack n’ slash game yet. The LP will begin sometime between late March/early April.

Before I end this blog, I want to leave off with promoting my channels and social media. If you guys are interested in viewing my content, have at it.

In the end, Let’s Plays have been therapeutic for me. It let me relax and have fun, all while expecting rage at the same time. But hey, it’s not like I’m gonna say something stupid such as “If I gain 1,000 subscribers on the LP channel, I’ll play Sonic 06” because that game has been done to death. I’m not doing that game. EVER.