2D platformers. They used to be everywhere. Then they died. The end!

Except it wasn't. A small decade ago, they slowly started to make a return, and since then it became clear that they were here to stay. Not only that, but they arguably became better than ever, seeing how they used the increased power available to create experiences that could never have been done when these games were fresh. We've seen a nice mix of old mascots and new IPs both doing excellent things with the genre, and the stage has long been set for something like Mega Man, one of the old masters of the genre, to make a glorious return. Now that seems to finally be happening with the announcement of Mega Man 11.

So why does the trailer for it do nothing for me?

All things considered, it looks perfectly fine. Fittingly cartoony art style and some neat new ideas for power-ups. But considering Mega Man's legacy, it doesn't seem worthy of being presented as the next big thing, the new event that's gonna hype everyone up. It hardly looks like the bombshell of an announcement that's gonna get a ton of in-depth coverage from Game Informer and fans going crazy. Nothing about it screams "the latest chapter from a legendary franchise". It looks more like a very competent fan game than something from a massive company, and that isn't the best impression from a trailer made to get everyone on board with the thing.

Didn't take long before I could identify why I felt like this. No, it's not because I don't like Mega Man. I'm not a superfan, but it's a fun series that I very much appreciate, and one that I'm glad has made a return. No, it's not because it's 2D, or because it doesn't "innovate" enough. It's about ambition and presentation. Mega Man 11 is the first in the main series to provide proper HD visuals, finally growing out of the deliberate retro look seen in the last couple of games. Yet the music sounds deliberately retro, most (not all) backgrounds look flat and bland, everything is blocky, and the world doesn't feel very animated. I'm surprised they've even bothered moving past the NES style of 9 and 10 when doing so has changed so little. It's a good thing that it seems to stay true to the series, but the production value could be a lot better than this.

2D sidescrollers have had it a bit rough, despite their resurrection. I feel like they've often been seen as nostalgia bait; These little, unimportant distractions that the industry has largely grown out of. No one's gonna look forward to the next platformer the same way they do the next GTA, Arkham or Metal Gear, right? 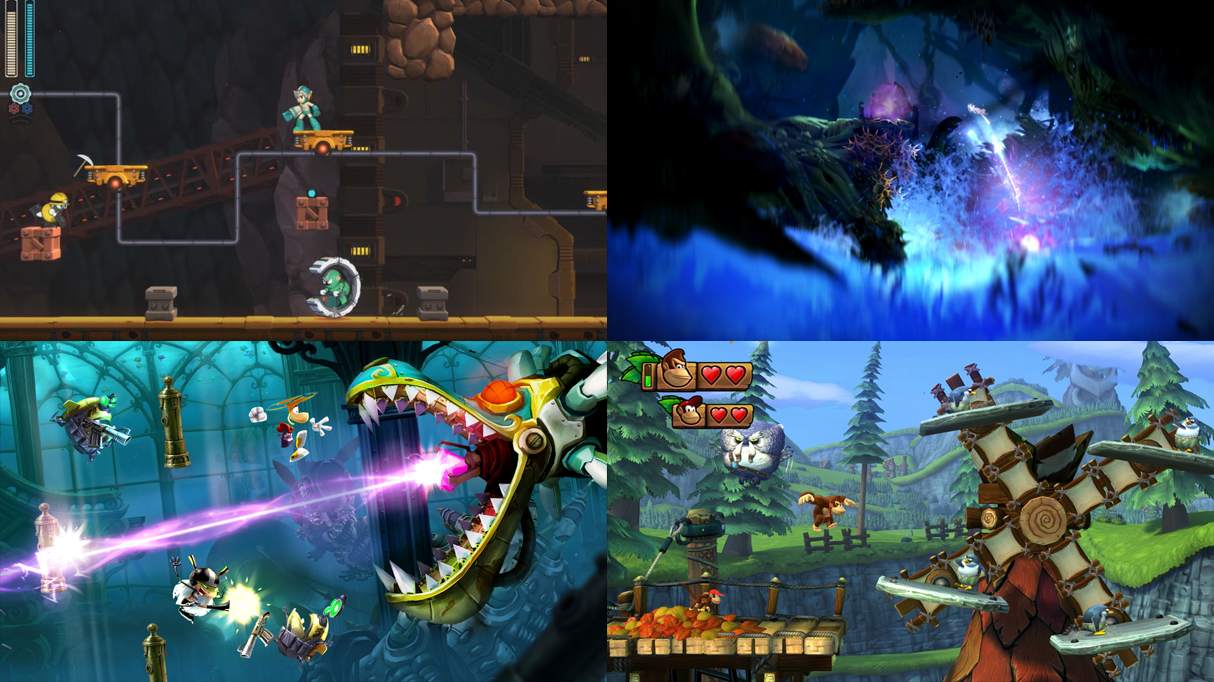 Seems a bit boring by comparison

Maybe not. But maybe something's changing there. I remember buying the game Ori and the Blind Forest because it looked pretty. Call me shallow all you want (please don't, it hurts my feelings), but that really was all I expected from it. Another artsy little platformer telling a cute and sad story, at the expense of deep or interesting gameplay. Felt like a fair and natural trade-off at the time.

Ori and the Blind Forest turned out to be one of the best platformers I've ever played, with a masterful presentation that outdid a lot of its competition for that year. This opened my eyes, as it made a genuine case for AAA 2D platformers being a thing. Yet it wasn't the first one to get wild and creative with the genre. Look at how Rayman and Donkey Kong Country were given new life, how neither of them relied on nostalgia in the slightest, instead choosing to just look, sound and play great. Sonic Generations wasn't entirely a 2D game, but those parts of the game still had incredibly detailed environments that felt massive and cool. They weren't just "that thing you liked, but it's HD now". They were "that thing you liked, but wilder and crazier than ever"!

My point is that 2D platformers can be every bit as big and bold as any other genre, and I suppose it's just disappointing to me that the new Mega Man doesn't seem interested in pushing the idea of the AAA 2D platformer, despite having plenty of inspiration available. Mega Man is Capcom's mascot (official or not, I really have no idea), the face of the company that owns powerful brands like Resident Evil and Street Fighter. The series used to be so good at sticking with the times without losing its touch, something so many others have struggled with, but now it seems comfortable with being stuck in the past. That approach disappoints me. It's the opposite extreme of the clueless reboot that ends up missing the point. Capcom still seems reluctant to use the brand to carry anything significant, or anything too expensive.

Despite everything the devs are saying about it being "accessible to a younger generation", Mega Man 11 is clearly a game made for the fans first, which is fine. But this could easily have been achieved with a flashier presentation, as well as levels that don't look like they were taken straight from the 80s. Even if it's not much, what we've seen so far doesn't even remotely compare to the standard that high-profile platformers have reached in 2017.

The game will probably be okay. A fun, inoffensive little game that satisfies some old fans. But I can't imagine this ever becoming anyone's game of the year, or favourite Mega Man title. Hopefully they'll do something more ambitious with the franchise after this. 2D doesn't have to be "old-school" anymore. It has its place in modern games, and I want to see it continue to grow.