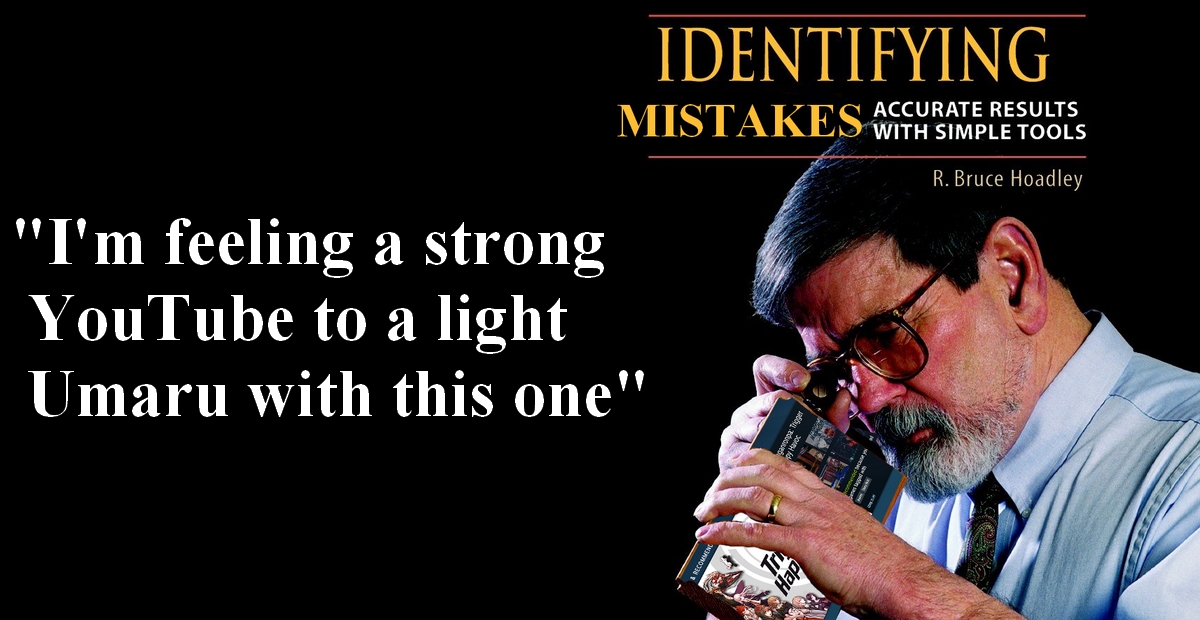 When you open the Steam store, the first thing you see is always this huge Featured & Recommended section, right? Instead of going with something more typical with featuring sales or the current flavor of the month, the store front attempts to show you personalized content that matches your interest. The only problem here? It's total garbage.

I never find anything I'm interested in, no matter how often I click "not interested". This also applies to the discovery queue and recommendations which, while redundant on top of being terrible, mercifully aren't visible until you scroll down.

"But Bass", you say, "how is this news? The Steam store layout is old stuff now. Shouldn't you save your sarcastic clickbaits for something a bit more meaningful, like the top five things you might have missed in Episode 110 of Dragon Ball Super"? Well, you're probably right. But this is an important topic, and important topics deserve obnoxious behavior.

Come on Valve, it's not like you're working on any actual video games!

1: Get rid of stuff people have already seen

As I'm writing this, the Steam Store is recommending me the first Danganronpa in the Featured & Recommended section, the Discovery Queue and random recommendations everywhere.

Only issue: I have already bought Danganronpa the first on Steam. On September 2, 2016. It was a gift, as I already played it on Vita, but there's obviously no need to tell me about the game's existence anymore.

Steam's recommendations tend to just loop around unless you tell the platform you're not interested in specific titles, one at a time. Requiring multiple clicks per game for every game you're not interested in is terrible user experience. I'm not asking you to keep a list of every single game page the user has visited, but a reasonable list of the last pages you've visited would get rid of a lot of duplicates. Something like this, basically: 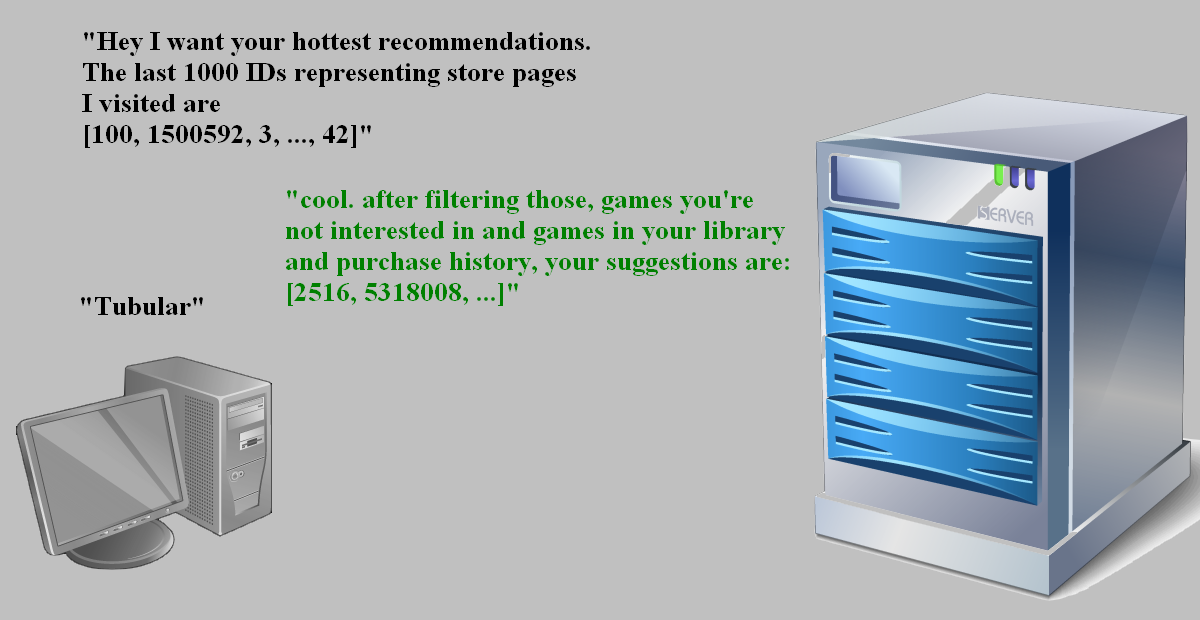 You don't even need to change whatever algorithm you use for the actual decision-making process! The bad picks will simply disappear once the user has checked the game's page once. How convenient! 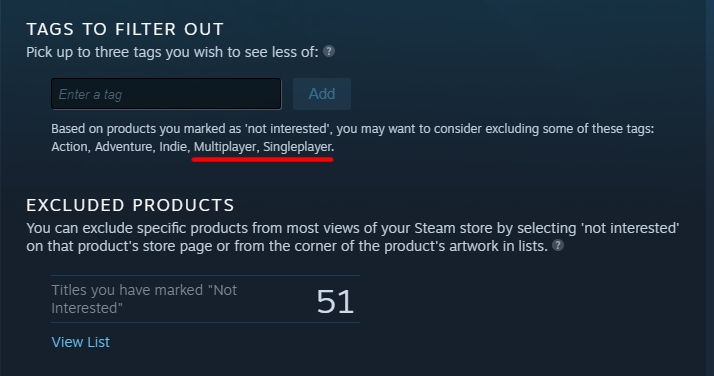 Believe it or not, it's possible to customize the Featured and Recommended section! It's just that the options suck. You can either exclude specific products individually or pick certain tags to see "less of". That's it. There's no option to tell Steam what your favorite genres or tags are, or to pick specific titles to get recommended similar games. It's a lot less convenient to eliminate tags out of an unknown total amount than to just suggest positively what you know tingles your fancy. Why do things this way?

What's most boggling in the screenshot above, beyond the suggestion to filter out Singleplayer and Multiplayer, is that Steam is telling me to filter out indie games. This is the overwhelming majority of what is being suggested to me in the first place! They're tracking info that could be used to fine-tune my recommendations, while not using it?

3: Only use games you've reviewed to tune your suggestions

Here's a classic scenario. You purchase a humble bundle on the cheap and you end up with a lot of steam codes. You redeem the lot, maybe playing a couple but not for long, as there's usually one game or two that really interests you in there.

Your recommendations are forever tainted by the buttload of games you just added. And by forever, I mean for a couple weeks until they become a different blend of bad.

What if the algorithm only used games a person has reviewed on steam to judge whether that person likes or dislikes a genre. Doesn't that make much more sense?

Plus, that'd finally give me a reason to rate games on there. 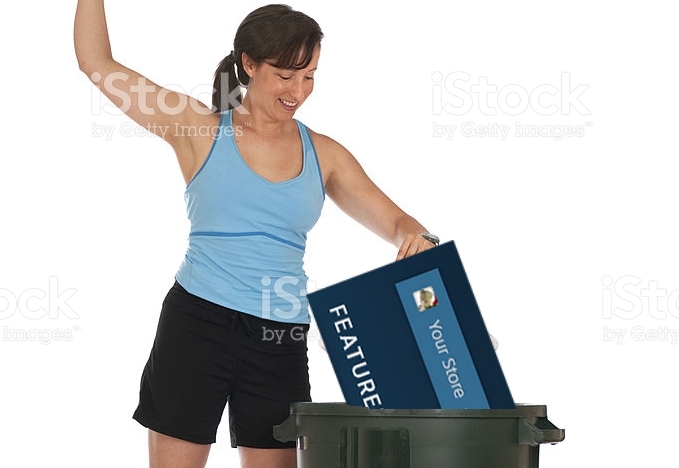 Let's say we don't improve the logic behind the recommendations. Too much effort. Well then, why not allow users to remove that section entirely? Instead of this useless feature that makes me dread opening Steam and being greeted by heaps of stuff of no interest, the top of the page would be Special Offers and Trending Among Friends instead. Since I'm a sheep that follows both large sale percentages and the opinions of my friends, that would be a very meaningful upgrade.

Well, the Special Offers part isn't great either, but I'll take any victory.

5: Replace every game by the same picture of Rob Thomas from the 1999 hit song Smooth

Fuck, anything you can think of is an improvement at this point.