Zelda Ramblings in the A.M.

It's 4 in the morning. I've been up for an hour and a half and I can't get back to sleep. My wife is coming down with a cold so she's snoring like her life depended on it. And my brain is doing this weird thing where it's looping the same information over and over. I keep see flashes of Metroid Samus Returns in my brain. This is odd, because I'm not really into Metroid. I just happened to watch a review of it today and my mind latched onto the footage.

Incidentally, I have been thinking a lot about Zelda: Breath of the Wild and I've wanted to share some thoughts with you. This isn't really a review, just some disparate thoughts that might not make any sense. Spoilers ensue.

Firstly, that voice acting. It's bad. I did not enjoy it one tiny bit. I really felt that it subtracted from the experience, rather than adding to it. If you're going to bother with adding voice acting to Zelda, take the time and energy to do it right. Hire some really talented voice actors. And of course, write a script that they can actually work with.

The horse system is garbage. I rode a horse maybe.... twice? During the whole game? It's just a huge waste. The way the stables and all that work. I can't understand why anyone thought it was a system worth putting into a game. But more importantly, horses only detract from the experience. Running around as Link is the best part of the game. Getting on a horse just takes you out of this.

I really like the concept of shrines. Little mini dungeons sprinkled all throughout the land is brilliant. I love it. I just wish they did more with the art aesthetic within them. They look more sterile than Aperture Science. And there are far too many test of strength ones. There should have been no more than 6 tests of strength.

The core idea behind the divine beasts was very creative. Having a dungeon be a giant mech is awesome. But they didn't really do much with that idea. Like the shrines, all the dungeons look identical. That's a huge shame, and makes no sense. They are also egregiously short. I think the biggest waste is the way you interact with the various systems on the divine beast. When you get into the dungeon, you are tasked with reactivating these pillar thingies in various parts of the beast. It makes sense. A machine that large would have various systems throughout it and would be controlled with different terminals. So, why not have these terminals actually do something? Imagine that one terminal activates the security system, populating enemies to deal with. One runs the ventilation, creating gusts of air? One is weapons, which causes the divine beast to fire a weapon externally and vent energy at various parts of it's body. So you're walking around and there are energy blasts that vent through certain sections of the level. Then another terminal might provide cooling for the machine. This would cause water to run through various parts of the level. So, you would still have the freedom to activate these terminals in any order you saw fit, but everytime you do, the level changes in a notable way. It would ideally make the level more difficult. So you're actively making the level harder as you progress through it.

I don't like the way you increase hearts by completing shrines. I would much rather have heart containers littered throughout the world and save the shrine rewards for stamina, magic, or something else.

The big problem with this is that I have no desire to seek treasure. Why would I go out of my way to kill a powerful enemy that wanders through Hyrule? I'm going to burn through several of my weapons to get 1 weapon in return. Which I will then lose very quickly. And I get better weapons by completing shrines than I do from killing minor enemies, so there's no motive to fight them, either.

This also hampers the exploration. Hyrule Castle, for example. This area is huge. Tons of pathways and rooms. Lots and lots of fantastic loot to be found. But there's no reason to seek it out. Again, having heart pieces throughout the world would have helped this immensely.

I may as well mention the stamina system. I'm not a fan. I get why they feel they need to limit it. Otherwise, you'd climb literally everything and it would take little challenge (like Assassin's Creed). But you start with too little stamina, I feel. Takes a good long while to upgrade it. Of course, when I had upgraded mine a mere three times, I hardly had to worry about stamina ever again. Which makes me wonder why I needed stamina. And the things that use it are odd to me. Why does running use it? All it does is make me stop running for a moment after every few seconds. It's really annoying. It just subtracts from the fun of moving Link around the world.

Now, the exploration is what makes this game. It is so much fun. You really can go anywhere. The most fun I had with the game was seeing a mountain on the horizon, and deciding to climb it. I would spend my time climbing that mountain and finding the best way up. Often the top would have something neat, like a shrine. Sometimes I would just get a great view of the magnificent scenery the game has to offer. This would also be useful because I would see shrines down below and mark them on my map. I should also mention that I like the way you place waypoints in first person on the map. It's just a fun and precise way of doing that. 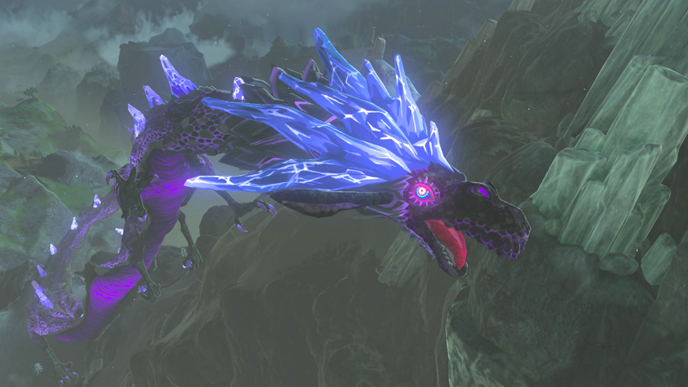 I would also like to mention the coolest part of the whole game. There is a dragon flying around a snowy peak. This poor guy has been corrupted. He is covered in this creepy black shit that has glowing eyeballs. You have to fly around him, shooting the eyeballs with your arrows in order to save the creature. It's an incredible sequence, and poses a fun challenge. It is supremely satisfying to complete. It was the best part of the entire game and I just loved it. If you haven't encountered this for some reason, go boot up your game and find this dragon!

Overall, Breath of the Wild takes risks. I really admire and appreciate that, in spite of how negative my ramblings probably seem. I think it's great to see Nintendo think outside the box and try to prevent their most important franchise from going stale. I think they made some significant missteps, but I'm glad they took the chance. I really enjoyed my time with the game. and most other people did too, it seems. I'm eager to see where Zelda goes next. Of course I fear that they will double down on the things I hate, like the weapon system. But perhaps they will find a way to take that idea and revamp it in order to make it more fun.