Thanks Angie22 for this amazing gif!

After only beating one single game last month, I thought August was unfortunately heading towards a similar result. Then around the final 10 days of the month I managed to finish 4 titles. Hah, take that backlog!

Something that was really making me feel stuck at my backlog-clearing saga was EarthBound. This game was a JRPG sized RPG, so it took quite a while for me to beat it on the daily commute... but another problem is also that I haven't touched many of the games on the PC portion of my backlog. So next month I should try shifting my focus a little bit, because there is a truckload of unfinished PC games for me to beat.

A few months go I asked you guys which classic SNES JRPG should I play: Chrono Trigger or EarthBound. To my surprise most people voted on Chrono Trigger, and back then I didn’t have much expectations about that game. And then I played it and dear Arceus, what a game! So after finsihing it I decided to also give EarthBound a shot, and while I didn’t like it as much as I was expecting to, I had a really good time playing it.

I did really, really enjoy how this game’s tone and style doesn’t resonate at all with anything from its time. I love the happy, colorful and vibrant graphics, the weird music and how it all looks really lighthearted while at the same time giving you a sense of there is something definitely off on this world. And something I find funny is that the protagonists gave me a strong sense of distinct personalities, even if there isn’t that much of explicit character development or interactions between them.

The more JRPGs I play, the more I realise how much I'm not a fan of old school random battle encounters, so I’m grateful that every EarthBound enemy actually shows up on the overworld. That said, those battles are so frequent and oftenly unavoidable that it ends up feeling as repetitive as a regular JRPG. But at least the game insta-kills weaker enemies, which I really, really like! The battle mechanics are kind off a mixed bag: sometimes they are fun and there are interesting fresh things going on, sometimes it feels like more of the same and drags on a little bit too long. The new status conditions are a breath of fresh air, until you realize most of them are the same traditional RPG status conditions but with different coats of paint over it.

That said: holy shit, what an ending this game had! In the end I felt that playing this game was one of the most unique games experiences I’ve ever had. I may have ended up not loving it as much as I was expecting to, but it was an interesting, weird and bittersweet journey. 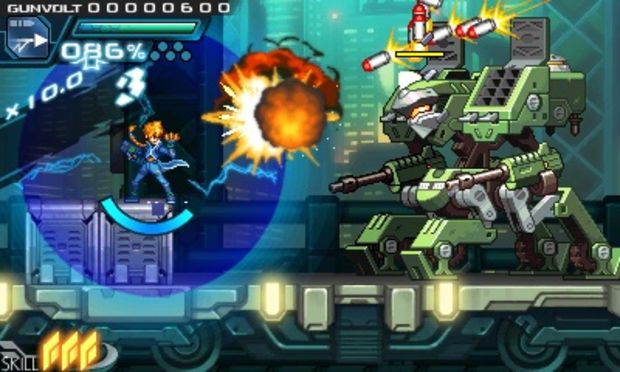 Something I really started appreciating a bit more after starting this blog series are short but great games like this one.

What I came in expecting was a quick but good Megaman-x-esque game, and that pretty much describes it! Good action gameplay, challenging platforming and great boss fights. Only complaint I really got is that there could have been a little bit more of enemy variety across the stages.

And while the Megaman influence is pretty obvious, it applies its own twist to make it feel different and interesting enough. While the Blue Bomber plays more like a “warrior” kind of character, Gunvolt skillset feels totally like an electric mage. By the way, have I ever mentioned that mage is my favorite classic RPG class? So obviously I found controlling Gunvolt lots of fun!

The equipment system was really interesting, but I didn’t got to explore it at all. By the time I had gathered enough material to craft the really interesting stuff (like the lenses) I was already on the last missions. Also I kind of suck at this game, so I would have a really hard time trading the prevasion necklace for any other gear on that same slot. And I found the “muse” mechanic pretty neat because I’m not very skilled on this game and it helped me on some of the most difficult stages… or did I only used it during the water stage? I can’t remember right now. Oh and by the way I didn’t had this ability available during the last boss fight, so I had to bite the bullet, git gud and try it again and again, until I killed that boss.

I enjoyed playing it a lot, but after getting the bad end I didn’t felt like getting the better one at all. I ended up watching it on Youtube yesterday, and it was actually a pretty neat ending! But I’m ok about not getting the jewels to unlock it.

This easily was the game I was most looking forward to play this month. The very first video game I ever played was Sonic 2, and while I really liked some newer stuff like Colors and Generations, none of them scratched that Mega-Drive-era-Sonic itch I had. So I was really really hyped for Maania, counting the days before I could finally play it on August 15th… but then it got delayed on the very last moments. I mean, I’m ok with delays, but at least they could have warned it, like, at least a week before estimated launch, couldn’t they? And to make things worse, seeing everyone having so much fun and praising it only made the wait feel even worse.

Anyway, I finally got my game right before this month ended, and holy heck, what a great, amazing time it was! I was expecting it to be great, but it blew away all my expectations. It will still take a while until I fully digest this one.

First of all, the developers have an amazing grasp of how a classic Sonic title should be. It plays right, it looks right, it sounds right and most importantly, it feels freaking right. And I know I said that I like Generations, but something that really bothered me on that game was that Classic Sonic gameplay and level designs felt nothing like the classic titles.

I was a little bit apprehensive about the fact that most of the levels were based on the levels from the original games, because I would rather to play completely new levels. But this impression quickly fade away once I started playing: most of the remixes change enough stuff to feel like a brand new level. For instance, while Green Hill Zone is based on the original level, it also incorporates elements from Emerald Hill and Angel Island, while some parts of the level design have a strong Palmtree Panic influence, and the end result feels fresh is a joy to blast through.

The art direction is rock solid, and it is a step above any of the 2D titles released so far. The fluidity of the sprite animations is simply jaw dropping, and the new levels look simply amazing. And another new element I thought I wouldn’t like at all was the drop dash, but after using it if feels so good to use - a balanced brand new skill for the blue blur (and a lot more useful than the old insta-shield). The remixed themes of the classic levels are nice, but the themes of the new levels totally stole the show.

The boss fights felt really inventive and most of them were really fun too, and I really love when the game flips the conventions off, like - for instance - during the Chemical Plant Zone boss battle. I won’t spoil it, but I was laughing hard when I realized that actually was the real boss fight. The new UFO special stage is fun too, but it takes a while to get used to it (and surprise: I kind of suck at it), and it feels nostagic and fun to play the blue sphere stages once more. Only critique I have about them is that some blue sphere stages depend heavily on memorization, and giving the player right away a full set of 36 stages to beat felt really overwhelming, and its pacing doesn’t fit very well as a checkpoint-pole minigame in my opinion.

Other than that, oh boy I loved it all, a lot, so much, aaaaaaaaaaah! It was one of the most fun games I’ve ever played, and I’m still compulsively playing it from times to times. I really hope we get another one of these in 2 or 3 years, preferentially with 100% new levels, because the new ones from Mania were crazy inventive! 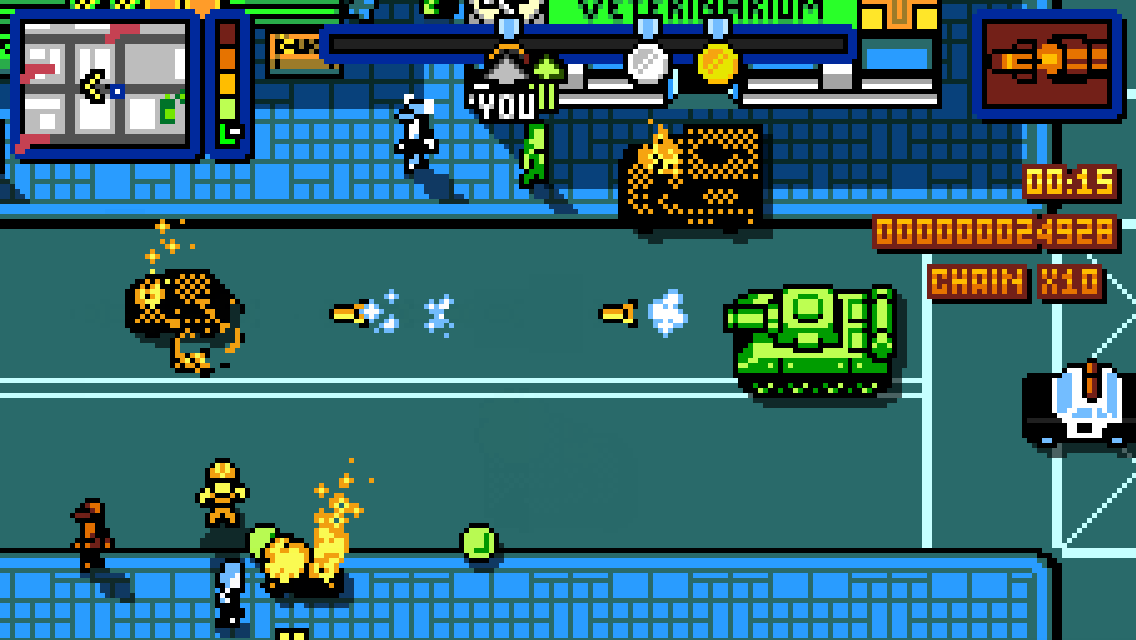 The main idea here was to mimic GTA gameplay - which it does in a very competent way - while also cramming the highest amount of 80’s pop culture and video game references as it was humanly possible, which most of the time felt unfunny to me (with a few exceptions).

The main gameplay felt mostly solid and driving was fun. The game was designed in a way to allow you to cause chaos to your heart’s content, so it is pretty easy to evade the cops when things start to get too heated. But a side effect of it is that it seems to be way too hard to achieve the max wanted level, as I usually would grab by accident a cop cloaking device that a dead cop dropped during my murderous rampage. But on the gameplay department, things start getting messy once it deviates from its basics: there is a ton of different minigames on it, and most of them aren’t very good or fun to play. The topdown racing missions are kind of a mess, as I always went straight ahead on sharp turns because of how the game only indicates one checkpoint at time.

That said, there were some fun moments, and I’ve got to go wear Mr Destructoid’s helmet and see the hunkiest man alive AKA Jonathan Holmes), so that’s something at least... I think?

I'm kind of glad that I actually got to finnish more than one game this month! Also, I really would like to thank every one of you guys voting on these pools. See you all next month at this same Churro time, on this same Churro channel.