I think it's a rite of passage for any serious Dtoider to write about their tussle with the monster that is videogame backlog. This is my story. (side note: I wrote this on Monday but I kept chickening out on posting this because then I'd have to commit. But after reading NinjaSpped's post, I decided it needed to be done.) 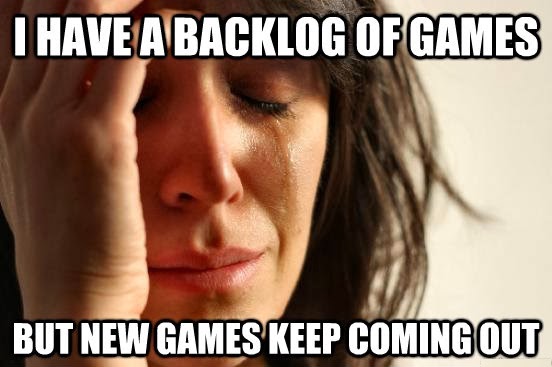 It's such a weird feeling that backlog inspires. It's guilt, regret, and fear. Fear of missing out, fear of not being able to connect with a friend because we haven't played a game they love, fear of how little time we really have. Looking one way, it is “just” a first-world problem. But from my perspective, the backlog-anxiety captures a lot of the frustration of our generation: we are told we can do anything, but no one teaches us that we can't do everything. No-one teaches how to identify and prioritize the scant few things we actually have the time to do. And how to mentally deal with all the things we miss out on.

For the past many months I've been trying to force myself to play The Witcher 3. I have pushed myself to trudge through hours upon hours of gameplay just hoping it'll get good. In the past, I had already played Witcher 1 and 2, especially enjoying the second one. So when everyone said Witcher 3 was the second coming of RPGesus, I was so hyped. But when I played it, it didn't click. I knew it was objectively good. But I couldn't focus on it.

Was it the game that changed? Did it get so full of pointless bandit camps and monster nests that I just burned out too soon? Was it that I failed to recognize all the open-world padding, which hadn't been there in the previous games? This shouldn't have been that much of a surprise. After all, the same thing happened with Dragon Age. DA Origins and DA 2 were both finishable, much like Witcher 1 and Witcher 2. But the third game went full open-world and so it was my mistake to play it like their predecessors.

Or did I change? Is it playing all the Heroes of the Storm and constantly checking Facebook and Qtoid that has crippled my attention-span? My focus isn't what it used to be, that much is quite clear to me. But surely while playing videogames I shouldn't need to force myself to focus, right? If it doesn't click, just move on to something else, right?

I put it on the back-burner. I searched my backlog. I found a recent purchase from GOG - “Beyond Good and Evil.” Looked up the playtime on howlongtobeat.com – 12 hours. Doable. Very doable.

I started the game a couple of weeks ago and loved it. I played through the Black Isle mission, then the Factory mission. The story was simple but compelling, the characters sympathetic, the gameplay very engaging. Today I reached the Slaughterhouse mission, and I found myself DREADING having to play more. “More of the same,” my mind kept saying.

I think I want to stop playing BG&E. And I'm terrified at what that implies about me. It means that even in a linear, short(ish) game, I can't focus enough to finish it. And I'm too scared of missing out on this and Witcher 3 to let them go. I so desperately want to connect with other gamers on BG&E, and Witcher 3 (and Pyre and P5, which I haven't even bought yet), that I can't definitively put them away.

After a bit of thinking, I've decided that both of these things are unhealthy for me: lack of focus and inability to let go.

And I want to tackle them both head-on. I'm taking a two-pronged approach to this issue:

So that is my plan to deal with all the backlog-anxiety that has been building up inside me. A bit drastic perhaps, but I can't keep staying the way I am. I want to change – to get back some of my focus, and to learn how to let things go.

I hope to post an update in the cblogs once a week, detailing my progress or lack thereof. I have no idea if I'll see any success at all. Maybe I'll fail so miserably that I won't even have the courage to post a follow-up blog. But I hope not.

A final challenge for myself: delete the savefile for Witcher 3 and BG&E. The ultimate act of letting go. And I don't know if I'm brave enough to do it.