I preferred Rayman Origins to Rayman Legends. Which is weird, right? Rayman Legends - even if you choose to overlook its tighter level design and increased variety - threw the bulk of Rayman Origins' levels in for free. How could I like Origins more? The reason I loved Origins, it turns out, has little to do with its mechanics. As you play through Legends, you sporadically unlock levels from its prequel -you do not unlock them in order, and it's unlikely that you will be able to play through them in order. You dart from desert world to ice world back to desert world. This unlock system is applied to the new levels in Legends as well. You do not get to steadily progress through one world's levels and move onto the next - the unlock system means you will play one level from this world, one or two from another, always jumping around, dipping into different environments, never feeling a sense of place, never feeling a sense of progression. This was presumably for the sake of pacing and variety. But man. It killed the game for me.

I like the sense of moving through a world. I like thinking about where I am in relation to where I was, and where I'm going to. I like feeling like I'm taking a road-trip. Rayman Origins is a flabbier game than Legends, with fewer ideas and with less energy and enthusiasm - but it has the patience to let you stick around in the places you visit. It's maybe strange to be talking about a sense of place in a 2D slapstick platformer (and especially strange when said 2D platformer (Origins) is so by-the-numbers with its choice of environments). But I think a feeling of slow and quiet travel is what I value above all else in games; the lack of it spoiled my time with Rayman Legends. 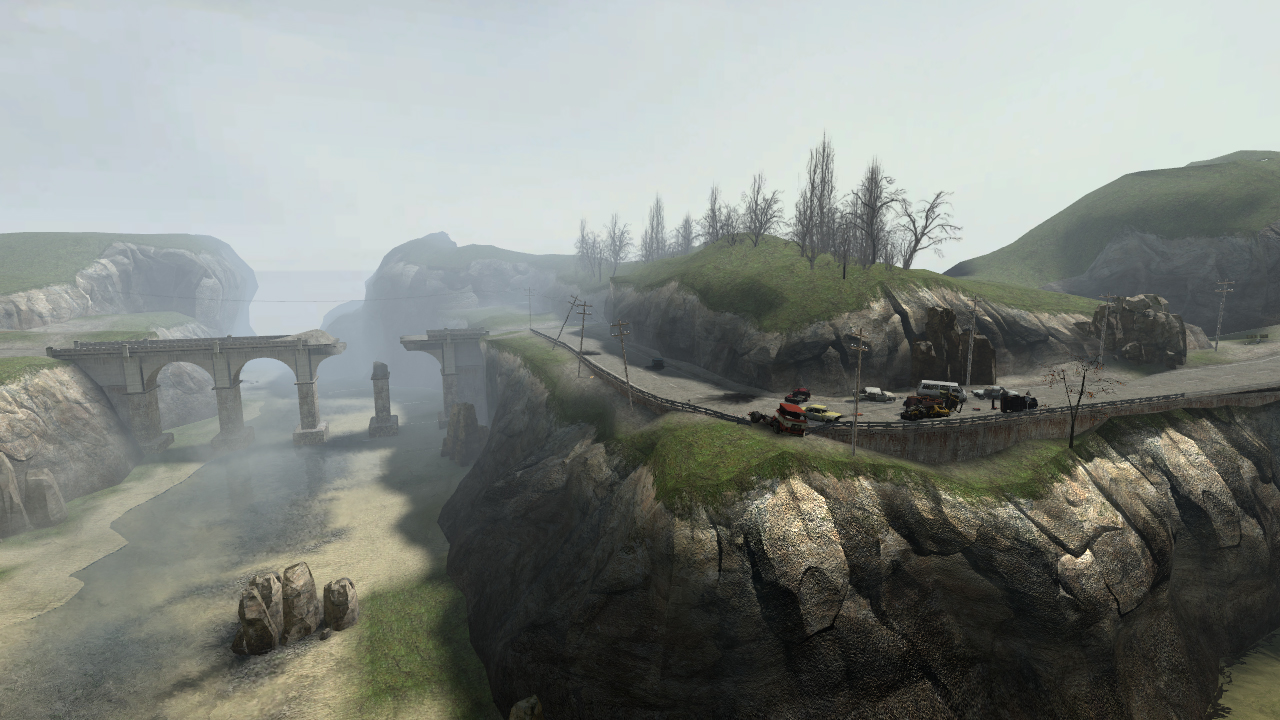 Half Life 2 is a game that feeds my craving for travel. Like Rayman Origins, it prioritizes a feeling of slow and steady advancement. Winding my way along the beautiful, beautiful Highway 17, was one of my favourite ever videogame experiences: it's the game's highlight, for me. Escaping City 17 by boat was a close second. These places feel like places, not levels.

Time is an important factor in this. Videogame levels feels like videogame levels when they are frozen in a static, timeless void. The incrementally changing postion of the sun as you move downstream from City 17 makes the world real in a way that photorealism never could, not on its own. You need to feel a progression through time as well as space. And it takes time to make your escape, really takes time, takes as much time as you would realistically expect it to take you to escape the boundaries of a city in real life. The hyperspeed of most day-night cycles in videogames may introduce an exciting unpredictablility, such as in Breath of the Wild, but the pleasure of feeling grounded in a world is lost.

I like time passing linearly in games; using jump cuts to take a player directly to periods of action, this can rob a game of drama. Take Ravenholm, for example. The night you spend in Ravenholm feels (despite the game's careful balancing of difficulty) like a true night of survival. This is because the night is flanked by day, by a slowly waning sun and a chilly and sickly dawn. Context provides contrast provides drama.

Travelling downstream, moving towards the night, you shed more and more: the soldiers, the noise, it all fades. You're left only with the quiet trickling of the river, and the steadily creeping shadows. The light goes eventually. The change in light is imperceptable while you're busy; striking in the silence following a gunfight. The point being: Ravenholm is foreshadowed, early. The player doesn't know Ravenholm is up ahead, of course, but still. We dread the night. This dread makes the ordeal of Ravenholm all the more impactful.

Simulating of the passage of time does, then, serve a purpose - several purposes, in the case of Ravenholm. Think, in contast to the night of this level, of Max Payne's neverending night-time. Time stands still in Max Payne; it serves the game's surreal tone well. But imagine Max Payne as a different game. How much colder and darker would the night have felt had we made excursions into the daylight? But fixed, static, the game feels dreamy; the player is made to feel apathetic by the unchanging landscape. You push on through Max Payne so as to reach the end of the game, not so you can reach the dawn. Actually seeing daylight in Max Payne is inconceivable. With Ravenholm, though, the fight to get through the night feels like a fight, not a bleary nihilistic slog, because you know how the game treats time: you know that the daylight is on its way, if you can only keep going.

Hope! That's what treating time in a pseudo-realistic manner lends Ravenholm. And finally reaching the daylight, stumbling out from an underground tunnel into the pallid dawn is one of the most memorable rewards I've had in gaming, made richer by being mixed with disquiet and dread. You've conquered the night, well done: now start a new day, from the beginning, all over again.

Half Life 2 treats the passing of a day as a significant span of time. How rare is that? And how much weight does it lend a game to feel that each phase of your journey is tangibly connected to the next?

I love this shit. I just love this shit. And so, finally, the point. We've reached the point. I'm here to appeal to you, Destructoid!  Consider this an extremely (perhaps unreasonably) specific (but also vague) game recommendation request. What games capture the feeling of realistically travelling through space and time? Half Life 2, and The Last of Us, are the only two games I have played that have well and truly scratched this itch. Please. I'm desperate.

(Probably irrelevant notes: Silent Hill Shattered Memories had a half-hearted stab at realistic linear time, but cut choppily from night into day; Metal Gear Solid 3 almost sort of satisfied me, but the narrative jumps about and the world feels fragmented into self-contained levels. The first half of Silent Hill 3, however, is truly magic I think - possibly/probably accidentally. Silent Hill 3 opens on a shopping mall at dusk. We have maybe twenty minutes, tops, of a hazy orange sky. And then dark falls. You spend a night (it feels like 2/3am when you finally reach your house) travelling home. But the night doesn't bring the damp and chilling dark of Silent Hill 2. With the red and orange palatte of the otherworld, the dark hangs warm in the open expanses of empty shopping mall and subway. The first half of Silent Hill 3 has for me always strongly evoked the feeling of a summer's night - this is despite taking place mostly indoors. But the sunset that opens the game is such an unexpected sight (this is Silent Hill, remember!), it lingers in the mind, and infuses the following hours with a fading warmth. This tiny transtion from sunset to dark does so much to make the opening hours feel real to me; it's genuinely a significant part of why I love SH3.)