Why I'd rather cblog than freelance write as of late

There's a common saying/quote I've seen pop up when I've tried to look for advice or research this topic. “A blogger can be a freelance writer, but a freelancer writer cannot be a blogger”. This statement has honestly left me conflicted and wondering if the same applies to writing about games in general.

For those unaware, I've been dealing with a lot of shit in my personal life. Just a month ago I found out my dad had a tumor in his colon, the day before my birthday no less. Yesterday we learned he has stage 3 colon cancer and will be going through radiation and chemo over the next 9-12 weeks to shrink it down in size and surgery later this fall to remove it, followed up with five more months of chemo.

So as you can maybe imagine on top of being jobless and all this going on, I've been trying my damnedest to fight off depression every single day by attempting to keep myself busy with making videos and writing or keeping my mind off all of it in general through video games.

With that context out of the way, recently I stopped writing at GameSkinny simply because of what was going on with my dad and I just wasn't finding it fulfilling or fun anymore. I thought maybe I should just attempt writing at some other websites and pitch some things. So I then tried pitching to various websites small and big with various ideas in both video and written form – that quickly went no where.

In fact, I attempted originally pitching Ye old video game oddities & opinions of yesteryear months ago both in brief written examples and even video form to a few smaller sites. Which either resulted in no response or at best they liked the idea, but weren't interested in featuring it. So after asking for some advice from some people within games media and journalism, someone pointed out to me “why not turn it into a blog post?” Right there and then I remembered: “Wait a tick – I have one of those – right here!” – And did exactly that.

I know what you're thinking: "That absolute mad man!"

The feedback and response from it, absolutely made my day. Then when it was on the front page of the website a few days later, I felt this weird sense of redemption and it was probably one of the happiest days I've had in a good while. (Shouts out to Wes, thank you again.)

Best yet, I had an absolute blast writing it. So it left me wondering to myself if I should exclusively just write here for the foreseeable future in general. But at the same time, I question if that's credible. I mean no offense in saying that to other bloggers here potentially reading this or people who might take that the wrong way, I'm just clueless whether or not “blogging” is credible within this specific industry.

I feel like I need to write for coolgamerz.net or whatever website for [insert] amount of time to build some sort of credibility. So I ask what feels like a dumb question to anyone who writes or freelances professionally within games media: is a blog or blogging in general viable as portfolio of work that can be put on a resume?

Now sure, I could still easily write stuff like that blog post in my spare time at plenty of websites. But the reality is, a lot of these websites also have expectations of writers to do other things, such as being news correspondents, or guide writers for example, and expect you to write so many articles per week.

Which, if you're new like myself to writing about games for websites, guides and tips with some proper SEO knowledge and some damn good editors can pull in those clicks big time – which can definitely feel pretty great.

More than half those views were from a simple guide I did on how to find liquid mercury in Persona 5, it's fucking crazy what search terms and Google analytics can do.

In fact, if you just Google search: Persona 5 where to find liquid mercury, It's right there at the top and that still blows my mind and is still my biggest achievement in terms of viewage. (Which is probably squat compared to other places, I know.) Meanwhile other stuff I'm proud of on GameSkinny, doesn't even get anywhere close to that volume of views. But truth be told, I'm perfectly okay with that and understand why.

Hence why I'd rather keep blogging and writing right here, as opposed to trying to write/freelance for websites in general as of late. I couldn't really give a damn about views or exposure lately. I understand the value in writing news articles, guides, and pitching stuff etc. But lately I just don't find it any bit fulfilling or fun, and the way I see it, if I'm doing this basically for free, I may as well be having fun while doing it. (Especially with what's going on in my personal life.)

More importantly, what I also think Destructoid has over GameSkinny and other websites in general, is an incredible community, but notably plenty of acknowledgment towards it and pride within that community. Despite what some certain people may have said in recent events. (Also, that's no knock at GameSkinny, if you're like me and are new to writing, I can't recommend them and the JTP enough. They'll teach you the basics of everything you'll need to know. If I ever make it anywhere in this industry, I'm more than proud to say I got my start right there and I can't thank the mentors and editorial people over there enough.)

But what I believe makes Destructoid's community stand out more than any other place I've been, is the feeling of actually wanting to engage with this community. As someone who's been following and reading games journalism since they were in grade school, whether it was reading and collecting EGM or going to various websites like GameSpot and 1Up. Or even a website that I've been following since its inception – those good boys at www.videogames.com – I've never really felt the desire to engage with fellow members of the community, read the forums, etc. In fact it wasn't even until recently I made my first post on the forum over there welcoming the new hires. 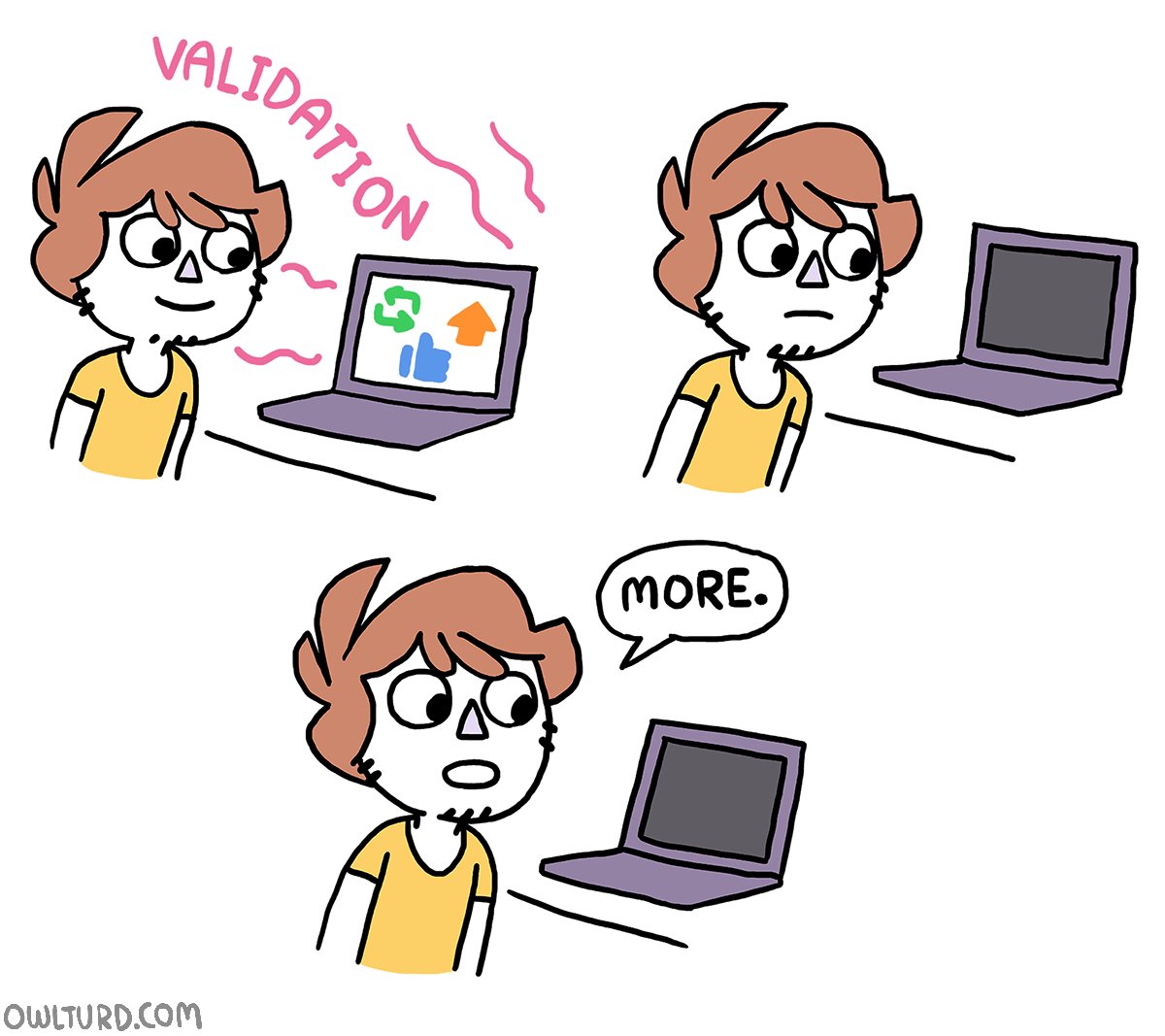 Meanwhile on Destructoid, I constantly feel the desire to post in the Qtoid, which by the way is ingenious in itself having some sort of baked in twitter clone on the site. I'm amazed other large websites aren't all doing this as well. From the Cblogs themselves and the call for bloggers in general for various topics, I always find myself checking in daily to see what people are posting and writing. Like for example: Have the spiders from Cory Arnold's WiiU and cockroaches from his PS4 broken through his protective suit yet? Are they slowly devouring him as I type this? I'm sure we'll find out soon enough with a garbled message on the Qtoid begging for help or to call the Japanese authorities. (Honestly his own fault for trying to use Qtoid of all things for that.)

No other website had me ever doing this, I never sit there and think to myself “gee I wonder what this dude with 10k forum posts has blogged about recently” on Giant Bomb's forum. Most people within the Giant Bomb forums concern themselves lately with how many energy drinks Jeff is consuming on a daily basis (seriously, I think he has a problem) or what they thought of the latest videos or podcast. So I think the community managers and staff here should be damn proud of what they have here, I truly think it's special.

But what about being a DIGITAL INFLUENCER!?

As for my YouTube channel, once again truth be told, if I had one passion even greater than writing about video games, it's making videos about them. I've been making video reviews now on my channel for roughly three years and honestly at this point I have zero interest in being a “YouTuber” or major internet personality or “digital influencer” as some of the industry is calling them. If you're thinking of making a gaming focused YouTube channel and go in expecting to make any kind of money or career out of it in this current age of YouTube, well...

Even after three years and building nearly 3000 subscribers and having a fair amount of videos on the channel get some pretty decent views considering the size of the channel, we maybe still average like $20 a month – which we usually then just proceed to blow on Steam games or stuff on the dollar menu at McDonalds. (Living the YouTube dream!)

My future plans at this point are to try and save up for a decent camera and proper equipment so I can attempt to film my first documentary revolving around game collecting here in Winnipeg and preservation of video games in the long term. There is also a VR arcade that opened up here that I wouldn't mind checking out and recording eventually and seeing if they would like to do an interview. But considering I'm jobless at the moment, I don't expect to do that for a long while, but I have other ideas cooking in my head outside of video reviews, rest assured.

Meanwhile someone like CaptainStudley's channel has less than 1000 subscribers, despite the fact in terms of production levels, he absolutely floors me every time I watch one of his latest videos. It's a damn shame a channel like his is lost in the ocean of YouTube gaming related content and the thousands of let's players out there, when in my opinion, he deserves to be on the top of the mountain with the work he puts into his videos.

I kid you not, this dude has the potential to be the next big personality within this industry in the next decade if he starts showcasing his work to other outlets. He'll devour my job and whoever might be reading this thinking they have a shot if he ever decides he wants to write or create content for websites and larger YouTube channels. I'm keeping my eyes glued on him for the next long, long time. If you've got the time, I can't recommend his videos enough.

I've been dabbling in Destructoid for a number of years now, I first started coming to Destructoid after Max Scoville left Rev3 and returned here, so I obviously followed his content. While he was at Rev3 I became a huge fan of his work and consider him a big inspiration to this day. (Study Hall was TOP-TIER!)

Now that I've started posting here more within the Cblogs and Qtoid, I feel like I've been missing out on something special for so long, but hey – there's no time like the present, right?