Horror has to be the hardest genre to develop for. How many jump scares before the player stops caring? How long do you let the player wander before forcing down a path? How do you keep a player from breaking the immersion you so carefully build? What enemy can inspire the right amount of fear without alienating any potential fans? Setting is incredibly important as well. The old cliche spots evoke a certain level of creepiness, but also a level of familiarity that could ruin the experience. Every little detail comes into play with horror, and this goes doubly so for a game that's completely in first person. Outlast artfully blends many key aspects of the genre into a unique experience, but it falters in it's execution.

Upon starting a new game, you're greeted with a message from the developers giving you a little bit of backstory. You take control of Miles Upshur, a freelance reporter following up on an anonymous tip. This tip tells you that bad things are happening at a place called Mount Massive Asylum, it's up to you to get everything you can on film and expose the Murkoff Corporations secrets. Sounds simple enough, but of course everything goes sideways about 5 minutes in. 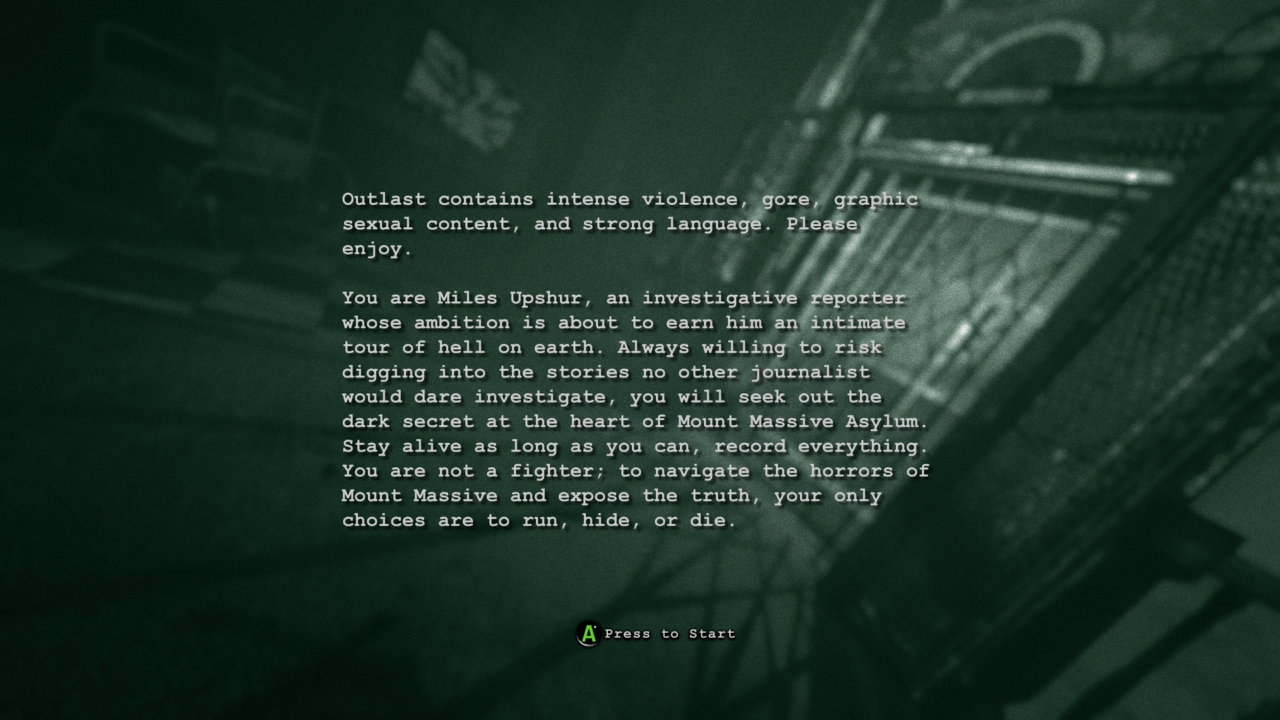 The main gameplay hook of Outlast comes in the form of a camera. As a journalist, you want to record everything possible, so you will be looking through a camera screen for the majority of your time in the asylum. The camera is also you're ticket to being able to see in the dark, thanks to it's handy night-vision mode. Careful rationing of this mode is necessary, due to it's reliance on battery power. These batteries are essentially the only pick up used throughout the game, and are rare enough that you'll want to conserve whenever possible. This hook adds a lot to the overall atmosphere of the Asylum, and also gave me major "The Descent" vibes. 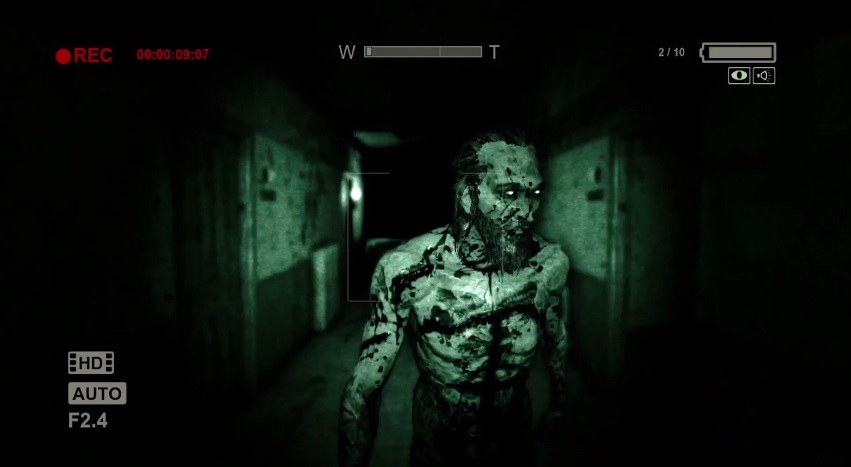 While you'll spend a lot of time meandering around, searching for files and filmable moments to help document your experience, the majority of your time will be spent playing hide and seek with various enemies. In Outlast, you can't fight back. You can only run and hide, which is a huge problem. The idea is solid, and fits well with the horror theme, but the execution is just awful. Basically every time you enter a new area, you are given a task to activate 2 or three things in order to activate the main thing and finish the area. For example, your first objective in the game is to turn on two gas pumps so you can start a generator and get power to an elevator. Every time you're given one of these objectives, you're also stalked by either one or two enemies intent on murdering you. The problem is that these enemies act randomly, and they have a knack for finding your hiding spots and forcing you to restart. Not only that, but there are also scripted scenes that seem impossible to get right the first time, leading to frustrating deaths that completely shatter the carefully built atmosphere. There's one section in the middle of the game that pissed me off so much, I wasn't even sure I wanted to continue playing. You're captured by a crazy doctor and need to get out via an elevator, but of course the key is lost and needs to be found before you can escape. Things started out fine, but I eventually hit a wall where I was caught by the doctor repeatedly no matter where I hid or how well I timed things. These rooms have about a dozen beds to hide under, but damn near every time I hid under one the doctor would walk into the room, go right up to the bed I was hiding under and take me out. It isn't like the doctor saw me go into the room, or even knew I was in this particular room at the time, he just honed in on my ass over and over. After finally making my way past this area into the area with the key, I faced a scripted event where the doctor busts through a wall and chases you. I died here a bunch of times trying to find the exit, turns out you have to slip past the doctor and go through the hole in the wall he created. Never have I gone from scared to angry so quickly. It's a shame, because I like the doctor character, and I think the scenario is outstanding. The trial and error nature of the gameplay completely bogs the experience down. After this experience, I stopped even trying to play the game the way the developers intended, and just started sprinting past everything I could. Outlast is a game I really wanted to like. It starts with promise, but the unique perspective can't save the game from the bafflingly frustrating core gameplay and set piece design. All the pieces are here for a horror classic, but they don't come together as I'd hoped. Frustrating enemy AI, weak objective variety, and annoying level design are combined with a solid structure of setting, story, and atmosphere. Then ending left me interested in finding out what would happen next, but the gameplay made me want to throw something. Outlast had the potential to be masterful, but ended up being a disappointing exercise in irritation.