When NetherRealm Studios announced their next game after MKX would be Injustice 2, nobody was surprised. The first Injustice was a huge hit, one that built upon the MK formula in key ways but took a few liberties of it's own. Back to block, quarter circle motions, and a heavy emphasis on projectiles and zoning headlined the list of differences, but the foundation of the studios games remained the same. Story mode followed the MK9 model, mixing cinematic cutscenes and fights almost seamlessly while crusing through a linear narrative. The towers were replaced with S.T.A.R Labs, X-Rays with super attacks, etc. It was different enough to potentially reach a brand new audience, but not so different that fans of the Studios previous work wouldn't follow. Injustice 2 expands the core NetherRealm formula once again, and the result is one of the most impressive fighting games I've played. The fighting system remains largely the same as the first games; returning characters even have the same combo strings in some cases. The biggest difference comes from the expanded meter options Injustice 2 implements. You can now spend sections of your meter on a combat roll and an air escape, in addition to it's usual uses to enhance special moves, initiate a clash, or pull off super moves. The sheer amount of ways to spend meter is paralyzing. Character traits return to supplement the 3 button light/medium/heavy setup, and once again stage interaction is an important piece of the combat puzzle. From the outside looking in it's not too different from it's predecessor, but these subtle changes keep things fresh from fight to fight.

Injustice 2's story is easily NetherRealm's best effort to date. From the bombastic giant explosions all the way down to a subtle twitch of a characters brow, every single scene just screams polish. I'm not really a huge DC fan, I've never really read a comic book in my life, but I felt invested from minute one. The story expertly mixes mainstream established characters like Batman and Wonder Woman with relative unknowns like Firestorm and Black Canary. I'd never even heard of a good portion of the cast before, but by the end of the story I liked pretty much all of them. Every once in a while during the 4 or so hours story mode lasts you get to a pseudo branching path. You can choose between 2 characters in these sections, and while the differences are minor for the most part, it makes for a good excuse to play through the story once again.

Easily the most marketed feature of Injustice 2 is it's gear system, and it's unfortunately hit and miss. The visual variety is greatly appreciated, but the stats are something of a hindrance in PvP. The numbers do make a difference, and they're on by default in every mode outside of ranked play. If both players agree ahead of the match you can turn the gear effect off, but no one ever does. It can get especially frustrating when it comes to abilities, which come mixed in with gear drops in the games loot boxes. These abilities range from adding the option to meter burn a characters standard special moves to completely new moves and fighting styles. You could have the exact same Flash stat wise as your opponent, but if he's lucky enough to have Flashes projectile and spin dash abilities you'll be at a huge disadvantage. It's disheartening to say the least, and it's only compounded by the way loot boxes work. Getting the loot boxes isn't really a problem, the game practically throws them at you. The problem is you have to pray to the RNG gods to get anything worth a damn. I think the system works just fine for the single player portion of the game. New AI Simulator battles allow you to pit your custom fighters against other teams setup by random opponents. The Multiverse, Injustice 2's facsimile of the Living Towers in MKX, is enhanced by the variety loot allows. It feels good to get a cool piece of gear for beating the shit out of the AI, it just sucks that it crosses over into the online multiplayer. 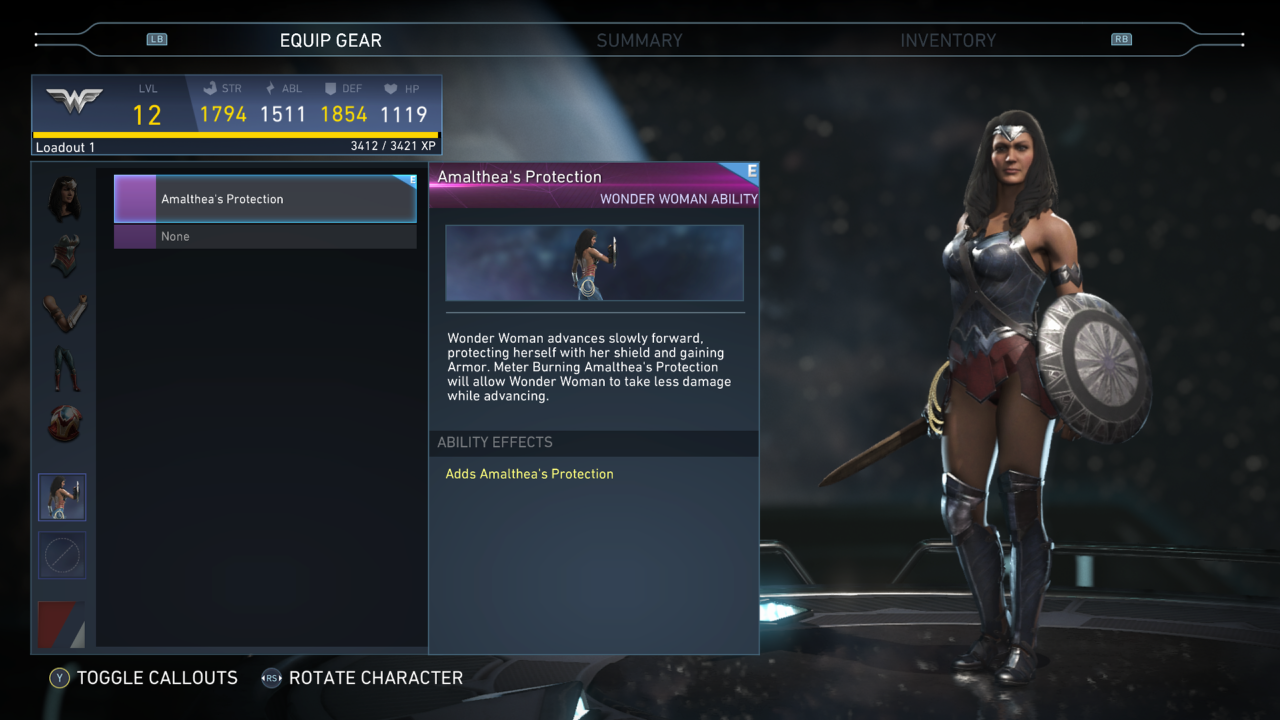 This game is easily the densest Fighting game in recent memory. There is a ton to do for the single player fans like myself between the ever changing multiverse and the AI battles. Of course you also have your standard multiplayer suite of features including replays and KOTH modes in addition to standard ranked and player matches. It's refreshing to play a game that feels so full featured, but this density lends itself to some nagging UI and usability issues. Menu options are sometimes in odd places. Once I was left wondering where the hell AI Simulator went while starring at the online menu before I realized it's nested in the standard multiplayer menu where it clearly doesn't belong. There are specific character tutorials in the game that I'm pretty sure most people will never find, hidden at the bottom of the standard tutorial menu. I didn't know for days that you can send your AI constructs through the multiverse in your stead, I only found out after reading about it on a forum. These things are frustrating, but can be overcome with familiarity and time. The biggest issue is how you open and obtain loot boxes. The game forces you to open boxes one at a time, and you can't speed up the process no matter how hard you mash buttons. It's a huge problem because you'll never just have one box. It's not like Overwatch, where a box is kind of a big deal, you'll probably have a dozen boxes before your first hour with the game is through. If that's not bad enough, you can't buy multiple boxes at a time. The only way to buy boxes (with in game credit) is to open all the boxes you own, you can then buy exactly one box. You have to open that box to buy another. It's manages to transform the joy you should feel when opening a box into a feeling of supreme boredom. I quite literally nodded off trying to open boxes to get a specific character ability. I gave up buying boxes after that. 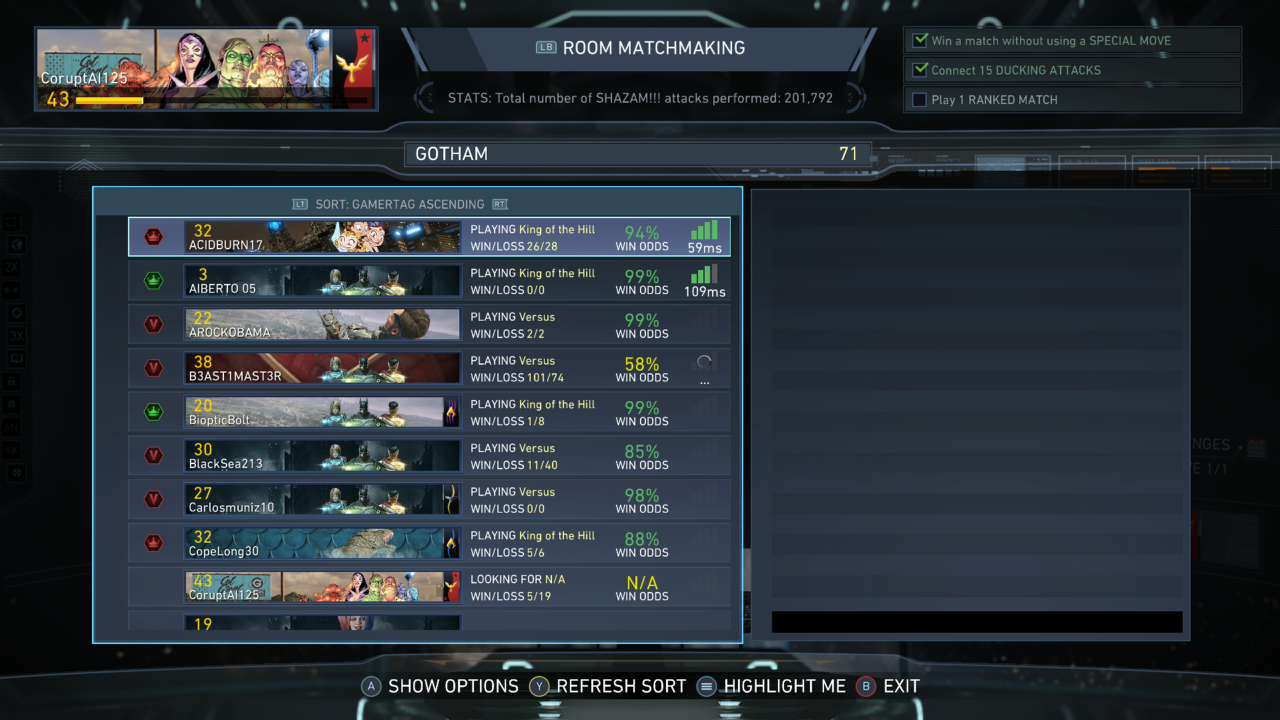 Injustice 2 is a marvel of the fighting game world. It's the new gold standard for single player content in the genre. It's got something for pretty much everyone, from the hardcore FGC players all the way down to the popcorn crowd just looking for a fun romp. The online multiplayer is fully featured with Rooms and Rolling lobbies, but can be frustrating when random gear is in play. The UI could use work, but it's nothing that can't be fixed with a few minor tweaks. The fights are fast and fluid, the abilities are appropriately flashy, and the balance feels spot on. It's hard to find anything bad to say about Injustice 2. It's the complete package, and an easy recommendation to all.