With rumors mounting about multiple Metroid games in development, and following a cryptic statement from Retro Studios that they were working on "Something delicious" earlier this year, today Nintendo of America President Reggie Fils-Aime confirms just what they've been cooking up behind the scenes. 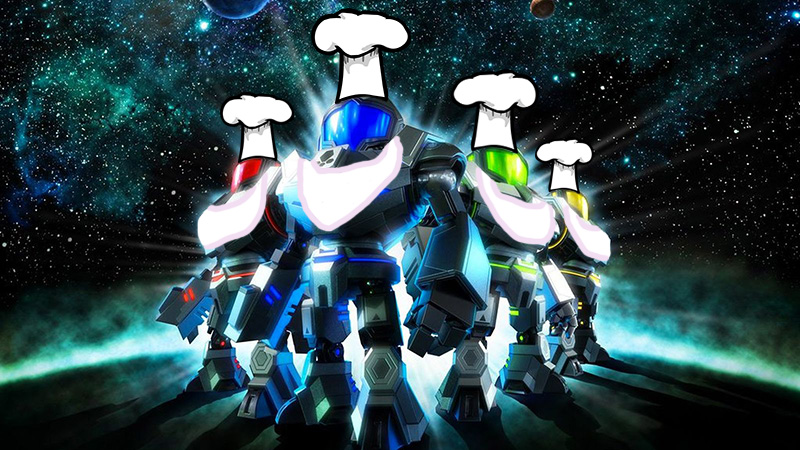 "We are proud to announce two new upcoming titles from one of our beloved franchises," Reggie said in an official statement. "As many may know, fans have been craving a new Metroid from Retro Studios for nearly ten years following the critical success of the Prime trilogy. We are pleased to finally meet that demand with Metroid: Federation Chef. In space, no one can hear you ask to pass the sour cream. The galaxy is a big place, and the Federation aint got time to feed. There are too many missions to be carried out, but now with a dedicated chef aboard each vessel, soldiers may rest easy. That is if you can keep up with the demand for deep-fried kraid rangoon. Train under the wing of a seasoned professional and take up arms with your spatula and fork as you hone your skills in the culinary arts. Use the HD rumble to precisely measure how much salt is left in your shaker, and carefully balance your ingredients to produce the perfect buffalo chozo wings. With your help, you can ensure that the galaxy's appetite is at peace."

Reggie also went on to briefly elaborate about the other Metroid title currently in development. "Our other project with Retro Studios takes Metroid in another exciting new direction. Metroid Survive will follow an elite squad of Federation soldiers who were sucked into a portal to an alternate universe where they will be forced to fight for their survival against zombies. Look forward to more details being revealed later this week."

The Error Report caught up with Retro Studios' CEO Michael Kelbaugh for an interview outside their headquarters shortly following the announcement. "We recognize that Other M was problematic in a lot of ways," Michael replied when asked about how Nintendo has learned from previous missteps. "Nintendo was trying to make the game more accessible by simplifying the controls, but aspects of it were clunky and it still felt complicated. That's why we're really simplifying the controls this time. Now with Metroid Survive you will only use a D-pad and one action button instead of two. Also the puzzle-solving and map navigation was too hard, so we're streamlining the game to be less about acquiring new gadgets and more about just shooting zombies in tight corridors. In fact, we've removed the map entirely because quite frankly you won't be needing it anymore."

When asked how this game would bridge the divide with longtime fans, Michael responded, "Oh don't worry, Samus will actually be in the game this time."

When pressed, we could not get Michael to confirm that Samus is actually playable however.

Protesters started appearing on the scene as the interview continued, and Michael was quick to try and alleviate concerns. "I know when you're watching the trailer it's all very action-packed and it doesn't really elicit that feeling, but there will be that sense of atmosphere and isolation, and one of the really interesting things that we will be exploring and playing with is how Metroid and zombies can actually co-exist."

When crowds started forming around the studio parking lot shouting obscenities, Michael made a surprising admission under pressure. "To be honest, Sakamoto kinda has us by the balls. We really wanted to do a HD followup to the Prime trilogy, but when I proposed it to him, he referred to me as a 'baka gaijin' and told me to speak only when spoken to. Ultimately this was his call, not ours."

The interview had to be cut short as a protester was seen tossing a molotov cocktail through the office windows.

Previously on The Error Report: Capcom shocked that game they are famous for does well