Intelligent Systems' Fire Emblem series is in an interesting place. While Awakening had much more marketing, hype and sales than the previous entries, and Fates carried the momentum well with shared sales of the game's versions nearly reaching Awakening's numbers, a number of existing fans weren't fond of the direction the series was taking. The most important character in the story was a customizable avatar, romance and supports played a huge role due to children units and their optional chapters, there was a metric ton of DLC, and the characters felt like walking archetypes instead of believable human beings. Many longed for the day the series would return to its roots as a no-nonsense medieval strategy RPG with permanent death.

Fire Emblem Echoes: Shadows of Valentia is not quite what people who started with 3DS are looking for, but it's not quite what people who want the series to return to the "classic formula" are looking for either. What it is, however, is a very refreshing and clever entry that quickly became one of my favorites. After playing Echoes, I've gone from wanting a return to the series' roots to wishing for more like this. Here's why.

One, two, three, four, how many mages are in this store?

As you may know, Echoes is a remake of the second entry back on the Famicom, Fire Emblem Gaiden. That game had the privilege of being a sequel in that era, and thus joined the ranks of games like Final Fantasy II, Castlevania II, Zelda II, and others as the experimental title. This meant a sizable amount of features that weren't reused a lot, or at all, in later entries. And yet, it's surprising how intelligent some of these differences from the norm can be. For starters, let's take a look at how this game handles and balances the different classes available to the player.

Fire Emblem as a series has often had an issue with balancing its ranged classes. Archers are traditionally fairly bad classes, unable to counter-attack at melee range or outpace other classes' damage. On the flip side, magic tends to only become better and better during the course of a game, thanks to the ability to counter-attack at melee range, attack at both melee and range distances, and deal high damage because of enemies' low resistance. There are exceptions, but the design of these classes leads to this inequality. Surprise, then, that Fire Emblem Gaiden got it right so long ago! Indeed, archers are able to counter-attack at close range, and attack at melee and range distances alike. This is balanced by lower accuracy and higher weight compared to weapons of the same tier, which means it's harder to double foes and hit them reliably.

Another thing that Fire Emblem Gaiden and Echoes does differently from the rest of the series is equipment. Unlike the rest of the franchise, there is no weapon durability mechanic. Even Fire Emblem Fates, that "got rid of weapon durability", actually kept it for a single weapon type: staves. How arbitrary! The aforementioned use of HP when casting healing spells is a much more coherent way to limit healers. On the flip side, though there's no durability, each character can only wear a single piece of equipment at a time. Physical classes can increase their damage while sacrificing speed by equipping weapons (particularly useful for archers, who gain the ability to deal extra damage to flying units), or wear shields to increase their defense. Mages might benefit more from rings that passively increase stats, or food that allows them to recover without relying on a healer. They don't require special tomes to cast a variety of magic, since all spells are learned by leveling up. That's actually a great thing since stronger spells are much slower and cost more HP, which means there are a variety of things to consider every time you battle with a mage. Some battles in Echoes really require you to think about your loadout, which is impressive considering it's pretty much never an issue in previous games. That's what happens when characters aren't able to hold all of the weapons and vulneraries at once!

On top of this equipment mechanic, which was in Gaiden, Echoes adds weapon skills. As you use weapons and shields with a character, they'll learn special abilities they can only perform with that weapon. I do wish this mechanic was a bit more important in practice, since I rarely found the need to use them beyond the Iron Bow's higher accuracy shot that only costs 1HP and the Royal Sword's powerful moves. But, despite how unnecessary these abilities felt, I do feel like there is significant potential in the concept. I'd like to see weapon skills fleshed out in a future entry.

Sacred springs are yet another way to customize your army. Found in dungeons, these fountains allow you to boost a unit's stat by one point up to a maximum of two or three. They can be used to compensate for a unit's flaw, or on the contrary, make one of your strengths even more impactful. The possibilities are endless! Well, not really, but it's still a nice way to compensate for the inherent randomness with Fire Emblem's level ups. And where there are sacred springs, there usually are Mila statues! Those allow you to promote at any time, which is the bee's knees. There's nothing worse than wanting to promote a unit, but having to wait after an item or event to be able to do so. And in this game in particular, there's a good reason to promote early: the promotional gains are better the worse your stats are! Though for mages, I usually wait because I want more spells, it's still nice to be able to make the decision to promote units so easily.

Less is more, but more is also more?

The original game is preserved in its entirety, but there are also a number of welcome additions. Beyond the weapon skills mentioned earlier, the biggest improvements are in the writing department. A lot more context is given to the battles you fight, with fully voice-acted conversations and cutscenes that may not be the prettiest, but do an effective job at setting the mood. You definitely feel Alm's anguish after key events in the game story, which is very personal. Alm and Celica's journeys compliment each other well, with Alm taking the more military approach to serving his country while Celica takes the more spiritual one. The added dialogue here is appreciated and makes Echoes a more polished experience compared to the original.

Supports are added too! Yep, supports weren't in the original. But don't go getting your shipping charts ready yet, it's not the Awakening kind. There's no generational aspect, and characters mostly have established relationships before the events of the game. So you'll get conversations between lovers, or between childhood friends, but the new unit you just recruited probably doesn't have much to say to your old units. As such, the number of supports added to this game isn't the largest, but they're mostly worthwhile additions that flesh out the cast in a natural way. There are also flashback conversations available at Mila statues, that are just as good at fleshing out characters if not better! I quite like the implementation of supports in this game, hopefully they'll work the same way in the next entry. Maybe with the possibility of talking between battles for convenience's sake.

Rise from your grave!

Even with the new equipment skills added to Fire Emblem Echoes, and even with the bonuses in accuracy and critical rate from the new supports, there's no denying that it would still be one of the toughest entries in the series if the adjustments stopped there. The game likes to take you by surprise with tanky enemies, or opponents that can summon creatures at will. It can get overwhelming, especially if it's one of your first entries in the series. 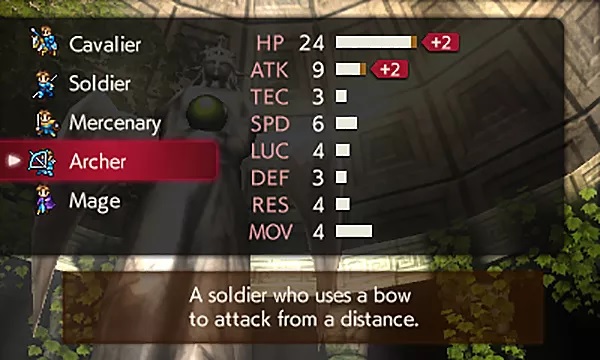 But thankfully, they stole borrowed the ability to rewind time from Tactics Ogre: Let Us Cling Together. Mila's turn wheel, given to both protagonists, allows you to rewind time a limited number of times per overworld battle or dungeon. This can let you rethink your strategy after failure and try a different approach without resetting the game from your last save. Brilliant stuff, particularly since it makes Classic mode (the one with permadeath) that much more accessible. But it's still not perfect. The final dungeons are lengthy, and will take a toll on your available usages of the turn wheel. Playing strategically is thus still important if you want to avoid losing characters just in time for the ending.

On top of that, the enemies can sometimes act first in non-story battles, which means you don't have the time to place your units strategically. When a unit dies because of that, Mila's turn wheel isn't much use! Thankfully, there are revival sacred springs available to both Alm and Celica, with three uses each. This allows for a maximum of six deaths on a death-less run, not bad at all if I do say so myself! These features go a long way to compensate for the sheer difficulty of some of Echoes' battles.

Where do we go from here?

We'll probably see the series return to Awakening's format in the future, since a remake rarely influences the direction of a long-running series. But while playing Echoes, I wanted a future Fire Emblem game to follow its example more and more. Dungeon crawling doesn't have to be a reoccurring aspect of the series by any means, but retaining the following elements would in my opinion particularly benefit the next entry:

There are a lot of good concepts Intelligent Systems can keep from Fire Emblem Gaiden, and Fire Emblem Echoes: Shadows of Valentia. Only time will tell if they'll do anything with this potential, but I'm hopeful.