BIG SPOILER WARNING: The following blog will talk about a lot of the things happening in the game, including the last episode. So turn around now if you haven't played it and don't want it spoiled. While the headline does say that I was disappointed, I still think it's a pretty memorable and unique game worthy of playing, especially since it's not that long and often on sale. Anyway, having recently played through Life is Strange in its entirety, I'm ready to rant, and with a new game being announced by the developer, now is a good time as any. 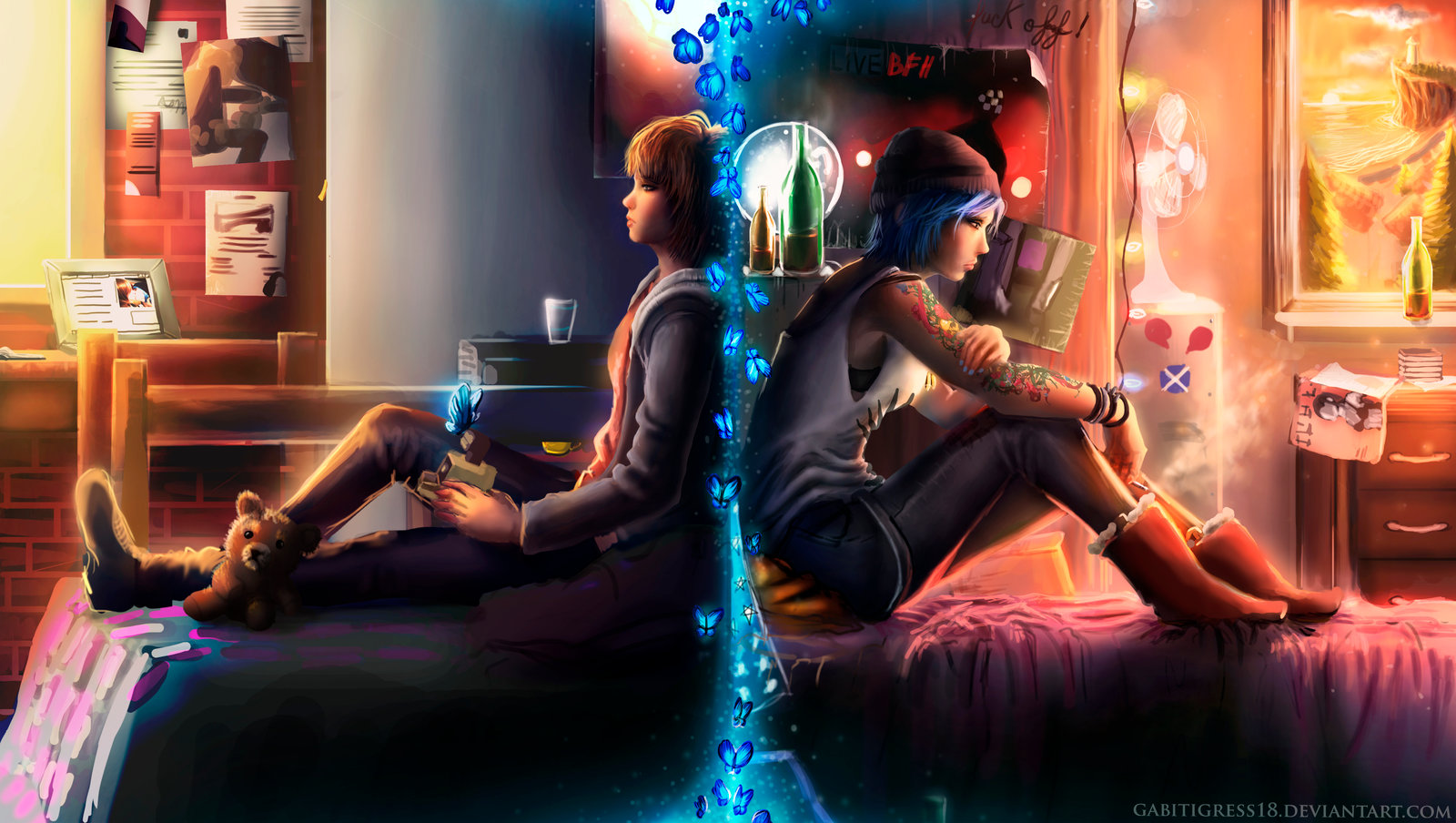 Let's start of with my biggest issue: The choices don't really matter that much. Let me explain that in more detail. For each episode the game presents you with three to four big choices, and around ten minor choices. Upon starting each episode, the game tells you that it features "player choice, the consequences of all your in-game actions and decisions will impact the past, present and future, so choose wisely".

To the game's credit, that's not a lie. It's just that these consequences don't have any impact on how the game ends. They only impact how certain scenes will play out, but the overall main story and its two possible conclusions remain the same. When I started playing, I thought "Ok, these minor choices will have minor consequences and will only alter how certain scenes will play out. The big choices will probably affect the final episode and how the game ends." And the thing I find annoying is that these "big choices" are presented as something significant. The game pauses, you hear this intense bass, the screen sort of wobbles and flashes red and white. Not to mention that a lot of these choices seem pretty significant, compared to the small ones. Max, the player character, even comments herself on the negative aspects of these choices no matter what option you pick. But in the end, the big choices have no greater effect on the overall story than many of the small ones. Silly me for thinking that these choices would have a large effect on how Arcadia Bay is saved and evil is stopped. 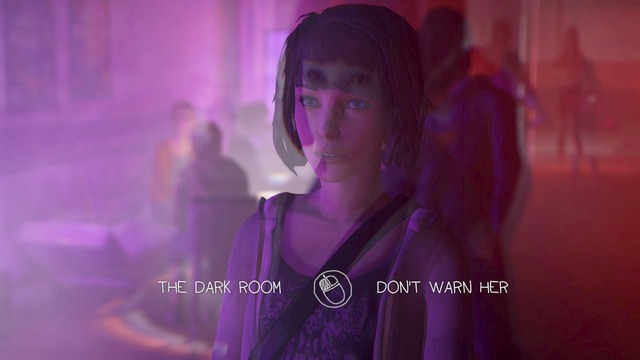 People say "But the game was about the journey and how the choices affected the things that happened as the story progressed". To that I say why have choices if most of your choices don't really matter, neither in the ending or during the story. Especially on the last day where about none of your choices affect anything since you end up traveling back in time to undo most of what happened on the final day. I've been a fan of adventure games since Monkey Island and the like for a long time. I love a game with a good linear story. There's nothing wrong with that. I've played visual novels with almost zero choices and had a good time. Just let me explore, talk to people and make choices on the fly. Don't make such a big deal about them if they're not going to really matter. Don't shove a report in my face after each episode, highlighting what I did compared to the rest of the world.

In the end, the ending you get isn't decided by the choices you've made through the game. It's basically Mass Effect 3 all over. You get to the final scene and are presented with a choice no matter what you've done: Sacrifice Chloe to save Arcadia Bay, or let Chloe live and watch Arcadia Bay be destroyed by a tornado, presumably killing an unknown number of familiar and unfamiliar faces (more on that later). It feels like such a slap in the face. And the worst part is that I can't really blame the game. I blame myself for assuming that my choices would affect the ending even though the game never explicitly said that they would. 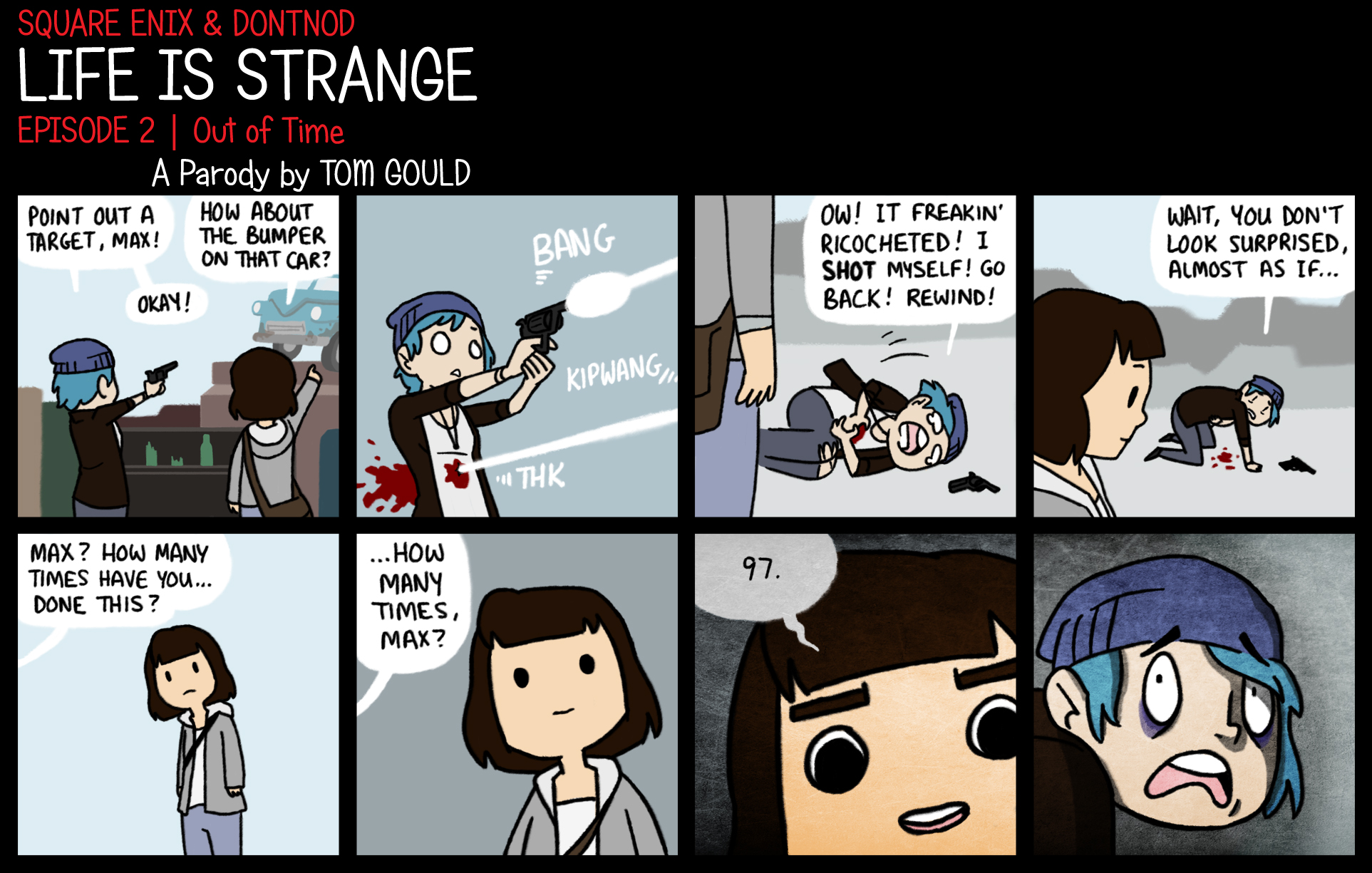 I think I only did it like three or something. Art by TheGouldenWay (Deviantart)

Now let's talk about unresolved plot issues. I actually really like the plot twist of Mark Jefferson being the big bad. Maybe a lot of people saw it coming, but it didn't cross my mind so I liked it. He makes a pretty enjoyable villain with his obsession to capture innocence in his photography even if it comes at the expense of abusing and murdering people. Nathan rages and makes for a creepy adversary, but he's not very interesting compared to Jefferson and his double life. Personally I kept believing that Nathan would get more interesting if his dad Sean would be revealed as playing a bigger role, explaining Nathan's behavior and motive along with his own.

And the fact that the Prescott family's doesn't play a larger role was pretty disappointing for me. It is always alluded to. Sean writes to his son about their family's destiny. You hear about the Prescott's buying up Arcadia Bay and some sort of big land and house construction thing. Samuel, Kate and others mention how the Prescott's seem like pure evil. It would have been cliche, but I expected them to have been involved in some sort of mystic ritual or ancient Native American burial ground disruption that somehow caused the natural disasters (and that again being linked to Max powers, more on that below). But it never happens. Jefferson is the big bad, Nathan was simply a disturbed teen who worked with Jefferson and tried to be like him, Sean is never shown, and nothing really ties them to the natural disasters happening. It just sort of fizzles out, especially Nathan's role as he is simply killed of-screen by Jefferson or arrested for killing Chloe. 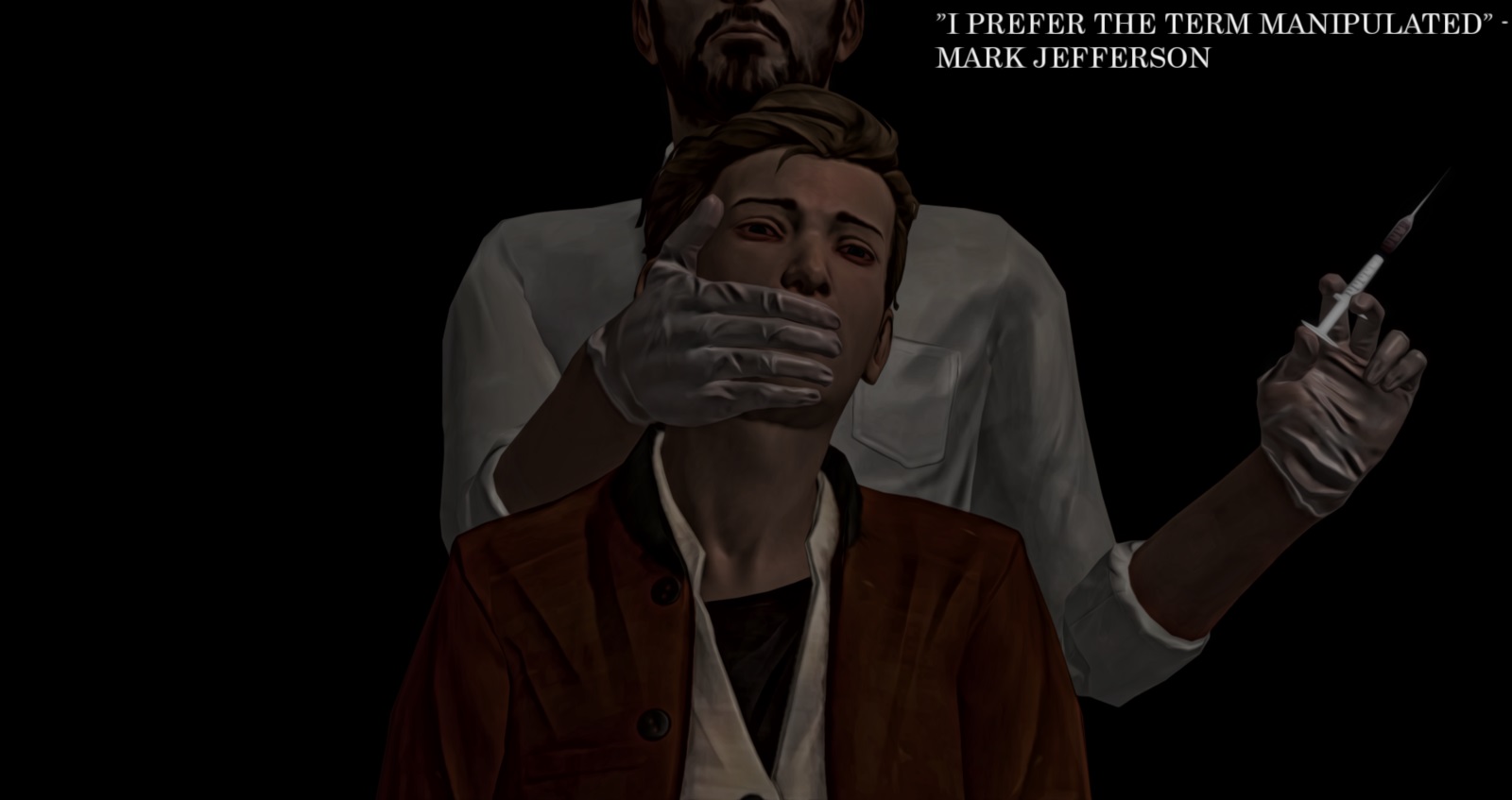 Then there's the whole issue of Max's power and the natural disasters. In the ending where Chloe is sacrificed, the tornado never comes and it seems like either Chloe's survival (through the butterfly effect) or Max's powers are the cause of them. But why? The game tries to do some sort of haphazard explanation or theory but in the end nothing is really explained. Even if Chloe's survival causes a natural disaster, how does it cause an eclipse or two moons appearing?

If Max using her powers are the cause, then why? Does nature simply not like it when people rewind time? What is the connection between rewinding time/time travel and natural disasters occurring? Is it something about the earth's rotation compared to the moon or tidal waves? And where the hell does Max's powers even come from in the first place? I don't know, and it's because the game never gives me a proper explanation. Which makes the sacrifice Chloe ending a lot harder to accept. Like I said earlier, I was expecting the game to reveal some sort of magic ritual or native American spiritual powers being connected to this whole ordeal, but nothing is really explained. 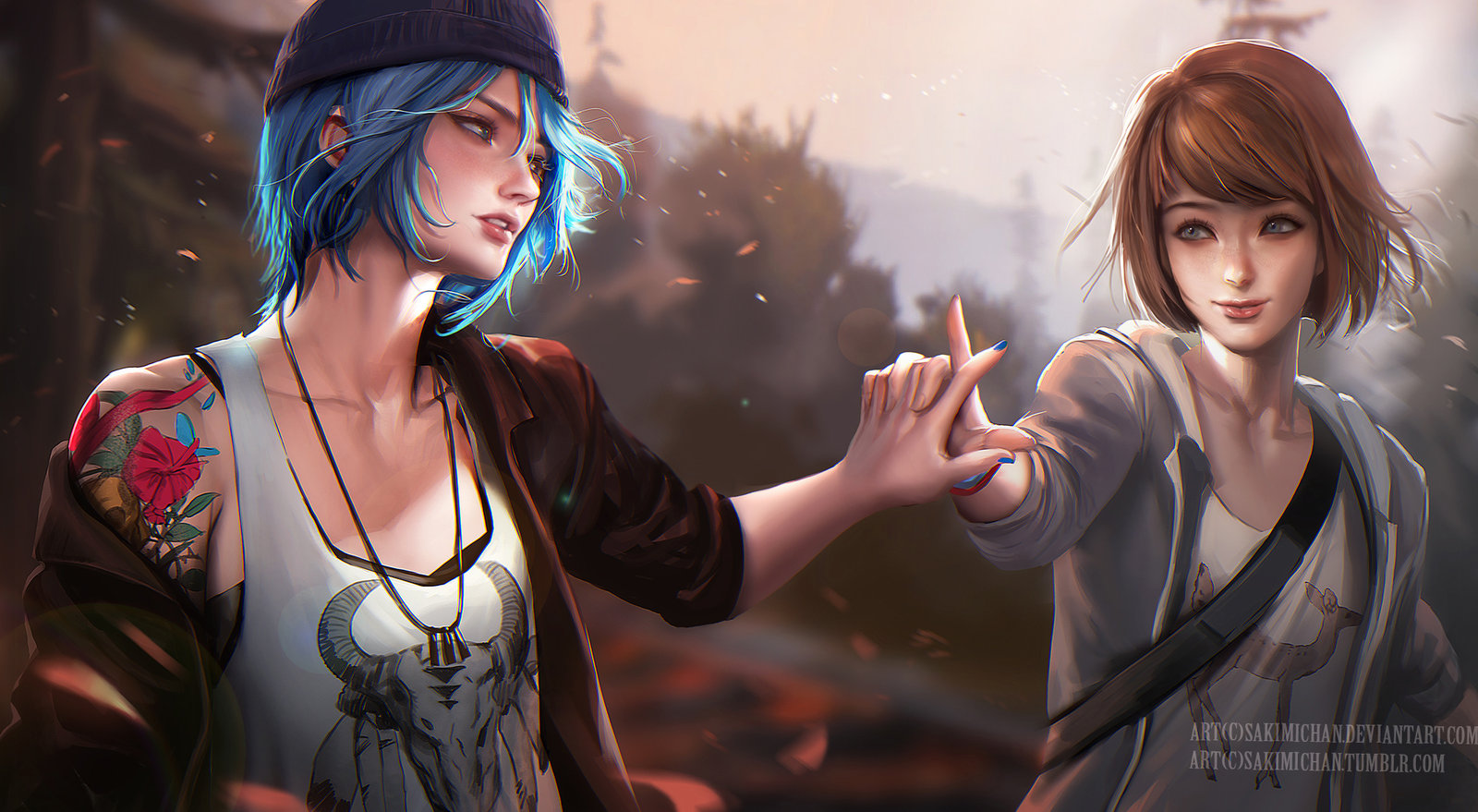 Speaking of, time travel rarely works out in fiction. However, time rewinding usually does. It works well in Majora's Mask and works well in Life is Strange until one point in the final episode. During her time as Jefferson's prisoner, Max travels back in time to send a text to David about Jefferson's secret photo studio. Jefferson is then arrested before anything happens, Max ends up winning the photo contest and travels to San Fran. During her time there, the tornado hits Arcadia Bay, she decides to go back in time to rip up her award-winning picture, but when she returns to the present, she's again stuck in Jefferson's studio. Ripping the picture leads to Jefferson burning her diary. But that shouldn't matter since she already texted David about Jefferson's studio. Even if he burns Max diary, his arrest should have prevented him from capturing Max in the first place. I don't get it, and it really pissed me off since the game had done the time mechanic so well so far. It doesn't matter either way since Max will end up near the tornado with Chloe anyway after one more time travel trip, but it just feels so unnecessary. 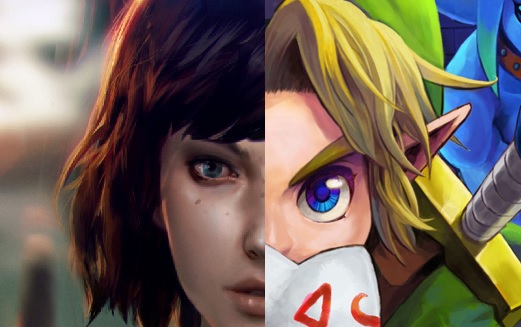 As for the endings themselves, I have mixed feelings. The one where Chloe lives feel rushed, and the other feels kind of nonsensical. But in the ending where she lives, she and Max just drive through the destroyed town, then credits. No talking about what is done, no talking about where they're going or what they'll do now. And definitely no reveal on who survived the storm, as if the game implies that absolutely everyone else died, despite the fact that the damages don't seem ridiculously severe, there should have been time to evacuate, and the school and its students are a bit away from the town.

As for the ending where Chloe dies, it kind of undermines the whole game. You let Chloe die, and everything sorts itself out perfectly. But then for what reason have I played the game for? What was the point of trying to fight if the winning move was not to fight at all? In this ending I feel like I have just wasted time.

But in neither ending do you get any sort of closure with the other characters. I love games where I can do a final round and talk to everyone about what has happened, and Life is Strange seemed perfect for that. But no. It's all pretty cut and dry. The final climax occurs and there's no sense of cooling down and letting the game breathe before it ends. A lot of movies make this mistake too. Shame really.

I hope DONTNOD learned a lot from making Life is Strange, and that a sequel will fix these mistakes. Like I said at the beginning, I still think the game is good and worth playing, but I couldn't help feel disappointed at the end of it. But hey, that's life, and it is pretty strange. 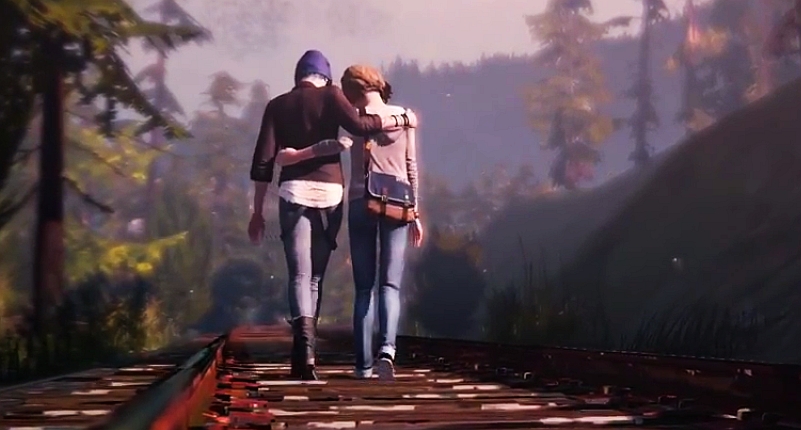