The Ballad of No Scope Joe

I first met No Scope Joe in a Denny's at the Ohio boarder late one night. I was just leaving and noticed this seething, bald monster of a man shouting down a waitress. "NO. NO. YOU DON'T UNDERSTAND WHO I AM. WHO AM I? WHO AM I? SAY MY NAME. SAY MY NAME."

The waitress only spoke Spanish, so she ran to get a manager.

Joe stood from his booth carrying his plate. "I'M NOT PAYING FOR BITCH ASS SCRUB FOOD. I WON'T PAY." And while he's standing, I see it. That unmistakable look in his eye of a no scoping maniac. Sweat collecting in the bags under his eyes. A constant bend to his upper lip showing off his front few teeth. Grills, of course. I saw the picture in so many online underground gaming zines since I was a kid that I knew his face like a cereal box mascot's, and here it was in flesh and blood, marching straight toward me. The face of No Scope Joe. The one and only scrub killer extraordinaire. My heart was pouding, the stuffy heat of the Denny's getting to me, so I stepped outside. No Scope Joe followed. 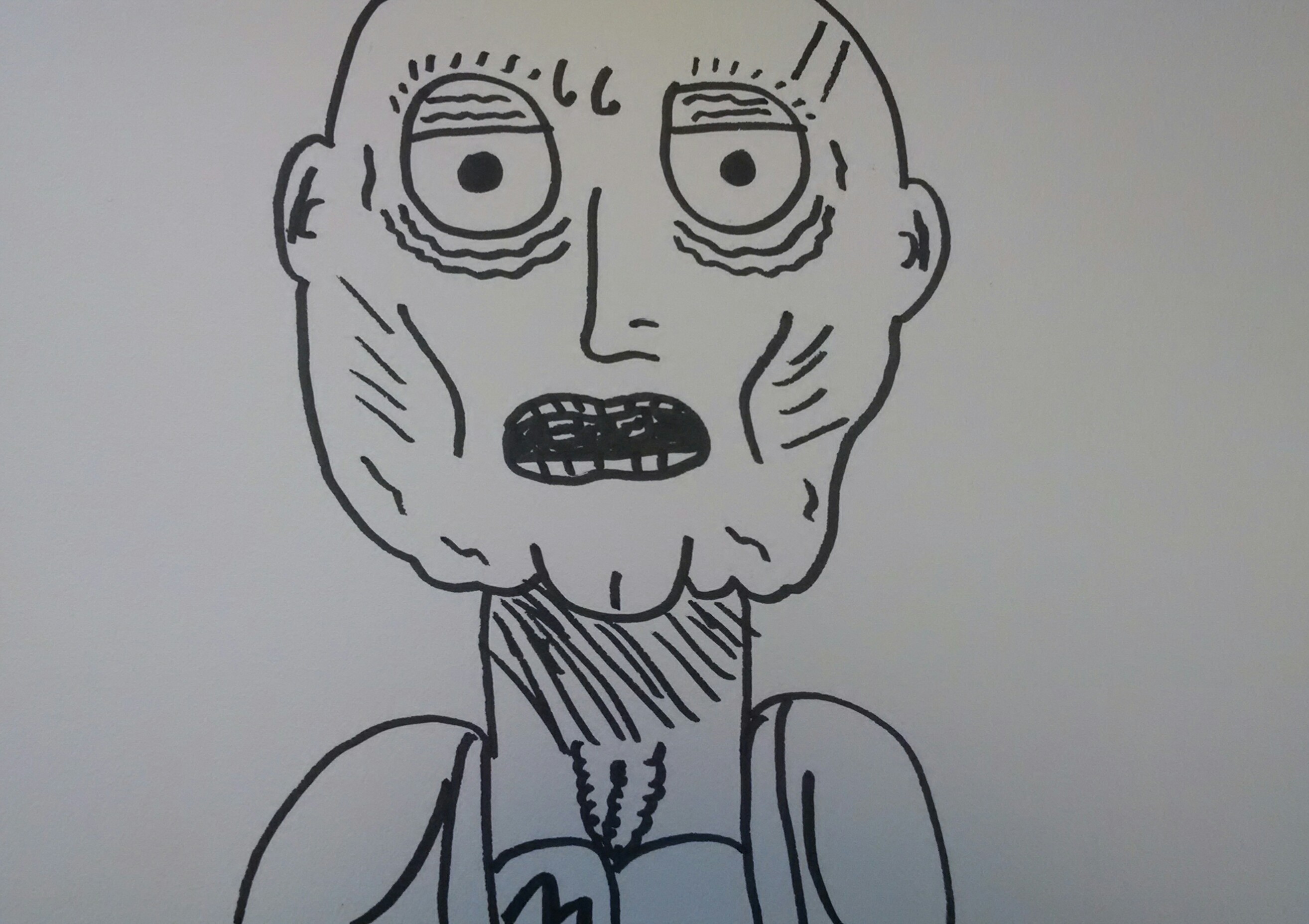 He stood in the parking lot, breathing steam, pacing. He noticed me after a second and stepped over, waving his plate. "HEY, KID." He lowered the plate and showed me the three greasy sausages rolling across its surface. "WANT THESE? SO FUCKING MAD I CAN'T EVEN EAT. YOU KNOW WHO I AM?"

I snatched up Joe's sausages in a second and nodded. Somehow the meat tasted better knowing it came from him.

He nodded, grinned, said, "STAY IN SCHOOL," and marched off.

Soon, the manager and waitress rushed out to the parking lot just as Joe's Ford Fiesta blasted down the highway.

The manager tapped me on the shoulder. "Excuse me, sir," he said. "Did that man leave with our plate?"

And with a mouth still full of sausage, I asked, "Do you know who the fuck that man is?"

No Scope Joe was an underground esports celebrity, too pure to play for money. No, he only played in one-on-one cage match duels. For the uninformed, these are fights in which both parties meet in a basement--any basement will do--and duel in a Call of Duty or Halo one-on-one, snipers only. No cash is at stake, here, only moms. They agree to be sacrificed for the sake of a player's self-respect and shackle themselves to opposite basement walls, and the winner gets the privlage of fucking the loser's mom. This is the truest form of currency in the esports world, and Joe had fucked a mother in every state and eight different countries. This gave him eternal bragging rights over Xbox Live and gave him the initiative to have MOTHER FUCKER tattooed across his chest. That's the kind of pro the man was.

He even perfected the one-eighty no scope, in which he runs to another player backward, spins around, and fires off a shot, devlivering an instant headshot kill and cememnting the fate of the loser's mother. Needless to say, I was obsessed. The man was a legend, a god. I needed to know where he was headed next. A No Scope Joe fight was a VIP event with maybe fifteen spectators. Maybe if I could follow him into Ohio and reach the house, bar, or abandoned factory where the next duel was going to take place, I could get in. I wanted to see the master in action. 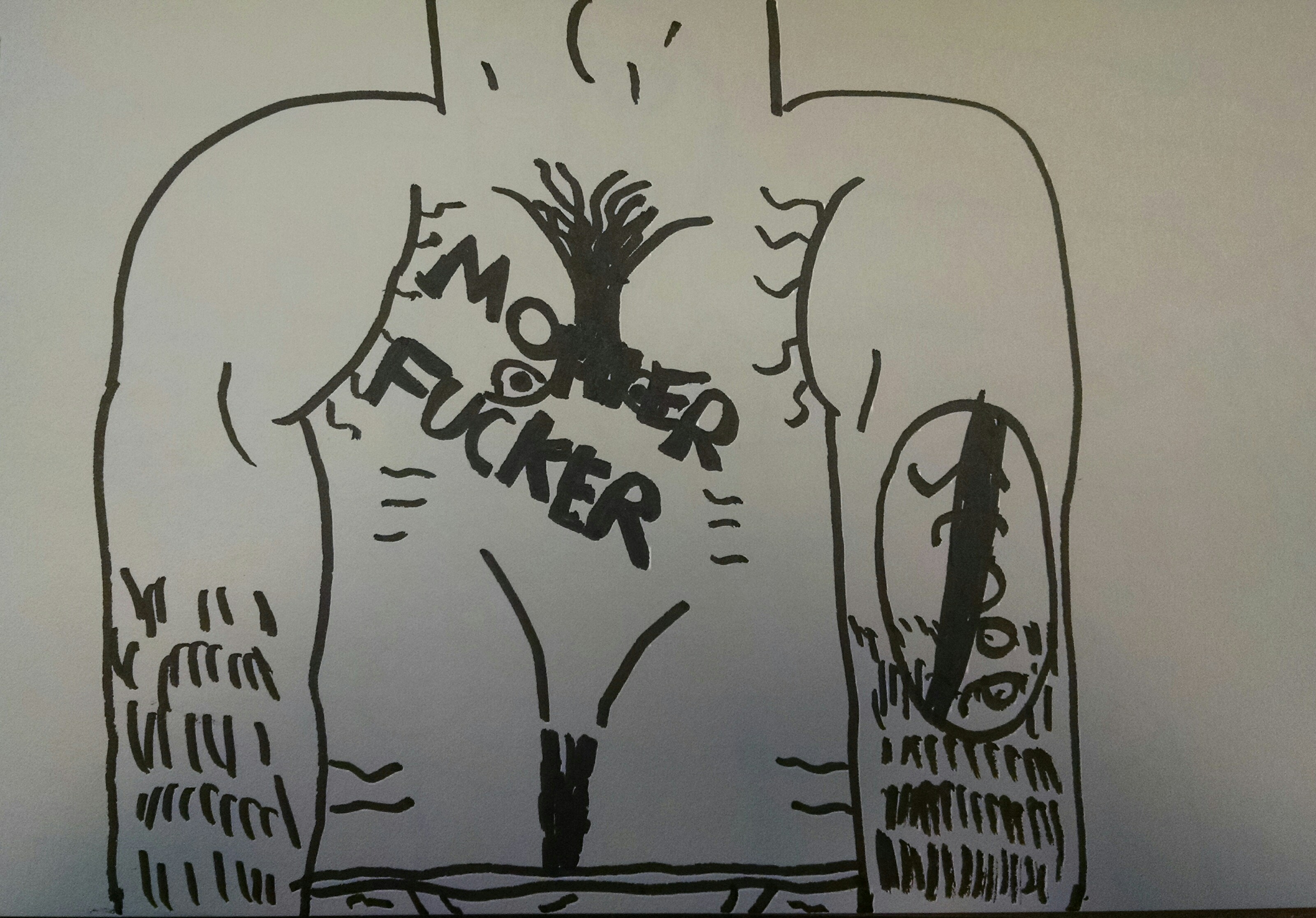 I caught him about twelve miles out kicking at a flat tire. I pulled over, helped him change it.

"THANKS, KID," he shouted, throwing spit. "WISH I COULD PAY YOU, BUT I DON'T GOT ANY MOMS AROUND."

I told him that I didn't want that, just for him to tell me his next duel spot and save me a seat, so I could see the action go down. I confessed how big a fan I was.

He grinned. "NO DUELS RIGHT NOW, KID. BUT, HEY, LET'S SAY YOU GIVE ME YOUR DIGITS, AND I'LL HOLLER WHEN ONE COMES UP."

And of course, I was there. We exchanged info, and I eagerly awaited a call from No Scope Joe.

He called me. A lot. Usually around three times a week. Never with any information about an upcoming duel. He'd just spout off about the esports situation and how the new Call of Duty looked like baby shit compared to last year's. "WORLD WAR II? WHO WANTS TO GO BACK TO WORLD WAR II? DIDN'T THESE BABY SCRUBS PLAY THE ORIGINAL? FUCKING NEWBS."

He always shouted, and his end of the line blew constant static with this whirring noise like he was blow drying his head. The man was an enigma. Eventually, he stopped talking games and turned his dissatisfaction to the military. "THEY GOT ALL THESE SNIPERS OUT THERE, RIGHT? ALL OF THEM, AND NOT A ONE NO SCOPES. ALL THEM PUSSY BITCH SCRUBS CAMPING OUT THERE IN THE MIDDLE EAST AND SHIT JUST WAITING FOR TARGETS TO COME TO THEM? WHERE'S THE SKILL? THE CHALLENGE? THEY ALL GOT THAT PINK EYE FROM USING THE PUSSY SCOPES. THEY SHOULD HIRE ME. I'LL SHOW THEM HOW IT'S DONE. I'LL NO SCOPE THEM ALL. YOU JUST WAIT AND SEE. I'LL NO SCOPE THEM ALL." 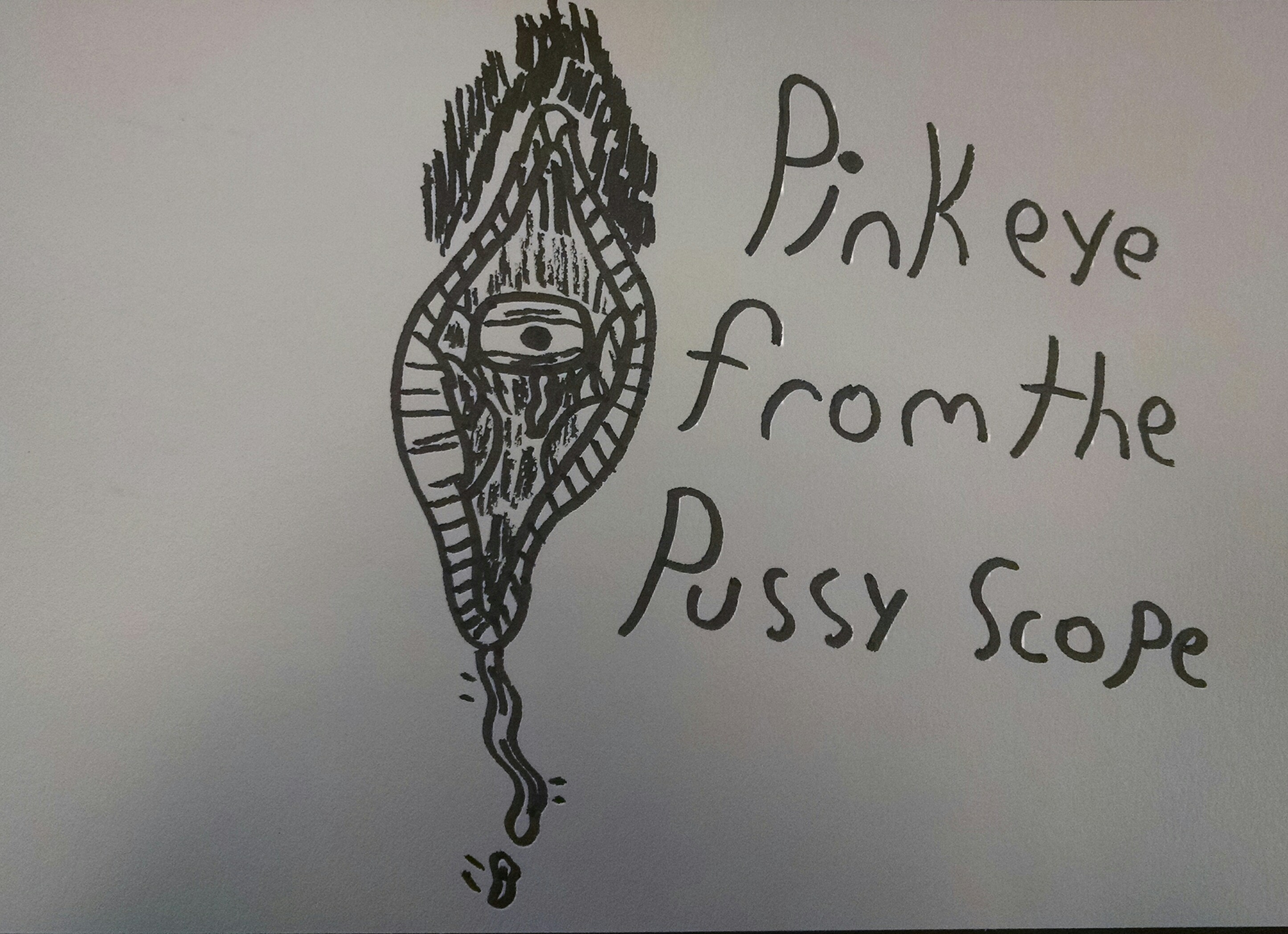 A few months in all of Joe's scorn was centered on North Korea. "WHY DON'T WE GET IN THERE? WHY DON'T WE DO SOMETHING? FUCKING SCRUB BITCHES WITH THEIR PINK EYES NOT DOING SHIT. LET ME IN THERE. I'LL HANDLE IT. I'LL GET IT DONE. NO SCOPE, MAN. NO SCOPE."

"I think it's a pretty complicated situ--"

I badgered him for over half a year, "When's your next duel? When's the next match? When's it coming up? When? When? Come on, man. Just tell me when," before he finally spilled it. There weren't any more matches in No Scope Joe's future. He was taking it hard, too. He lost all his friends, his sponsorships. He didn't have anything without no scoping. I asked him what happened.

"MY MOM, KID. SHE'S DEAD. SHE DIED. I DON'T HAVE THE CURRENCY TO PLAY, ANYMORE. BUT LET ME TELL YOU I NEVER LOST ONE MATCH. NEVER LET HER DOWN. NEVER LET HER GO DOWN. NO, KID. SHE DIED A VIRGIN, AND I'M PROUD OF THAT."

He went silent for weeks on end. I was starting to worry about the poor guy. Like, what if he killed himself? Who would know? I thought of him just rotting in his basement, a pile of those Doritos tacos in his lap, just moldering. No Google searches brought up where he lived, so there was nothing I could do. Just wait. 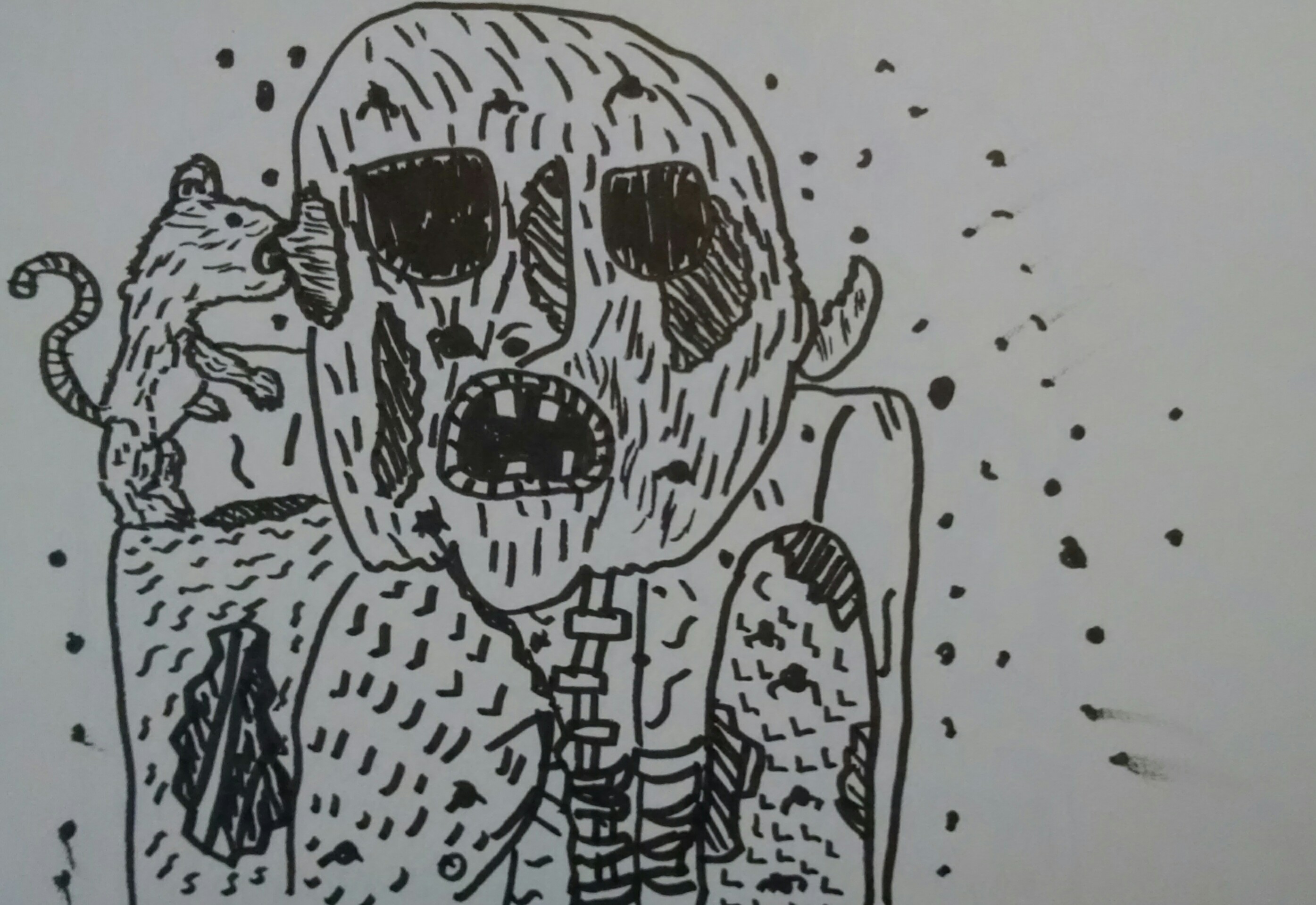 He called. The sound was even worse this time. I had to close my other ear to make out his words. Joe spoke quickly and didn't let me cut in. "KID? YEAH, THIS WILL BE MY LAST CALL. I'M GOING TO DO IT. I'LL MAKE YOU PROUD. MAKE MOM PROUD. I'M GOING INTO THE BIG LEAGUES. I'M GETTING ON A PLANE IN A MINUTE HERE. I'M GOING TO NORTH KOREA. GOT MY RIFLE TUCKED AWAY SOMEWHERE SAFE. HOPE THEY DON'T MAKE ME SIT ON THE PLANE. I'M TAKING OUT THAT KIM JONG-UN FELLAH. NO SCOPING HIM. FAT FUCKING HEAD LIKE THAT, LIKE A MELLON. MAKING IT POP, KID. WATCH THE NEWS. YOU'LL SEE."

And the line cut dead. I stood there holding the phone, knowing at best No Scope Joe would be indefinately detained, and at worst he'd be exectued. But even with those worries, I couldn't help but feel proud of the guy. His reputation held up. He was going for it, really going for it.

I never dreamed he'd pull it off.

So, there I was a couple days later in line at this burger joint, waiting to order, when one of the TVs cut to this CNN broadcast of some leaked footage from a North Korean parade honoring Kim Jong-Un. And there the dictator stood waving to the crowd from a platform, when out of nowhere this white dude in all black came running backward right up the ramp. I could hear some laughter over the military band, like this was all some kind of dumb white man joke the government was making the prisoners do. But then, that white man spun around one-hundred-and-eighty degrees and fired a shot from a sniper rifle concealed under his jacket. No scope. And Kim Jong-Un's head did split just like a mellon.

The figure dashed away in the confusion and disappeared into the crowd. 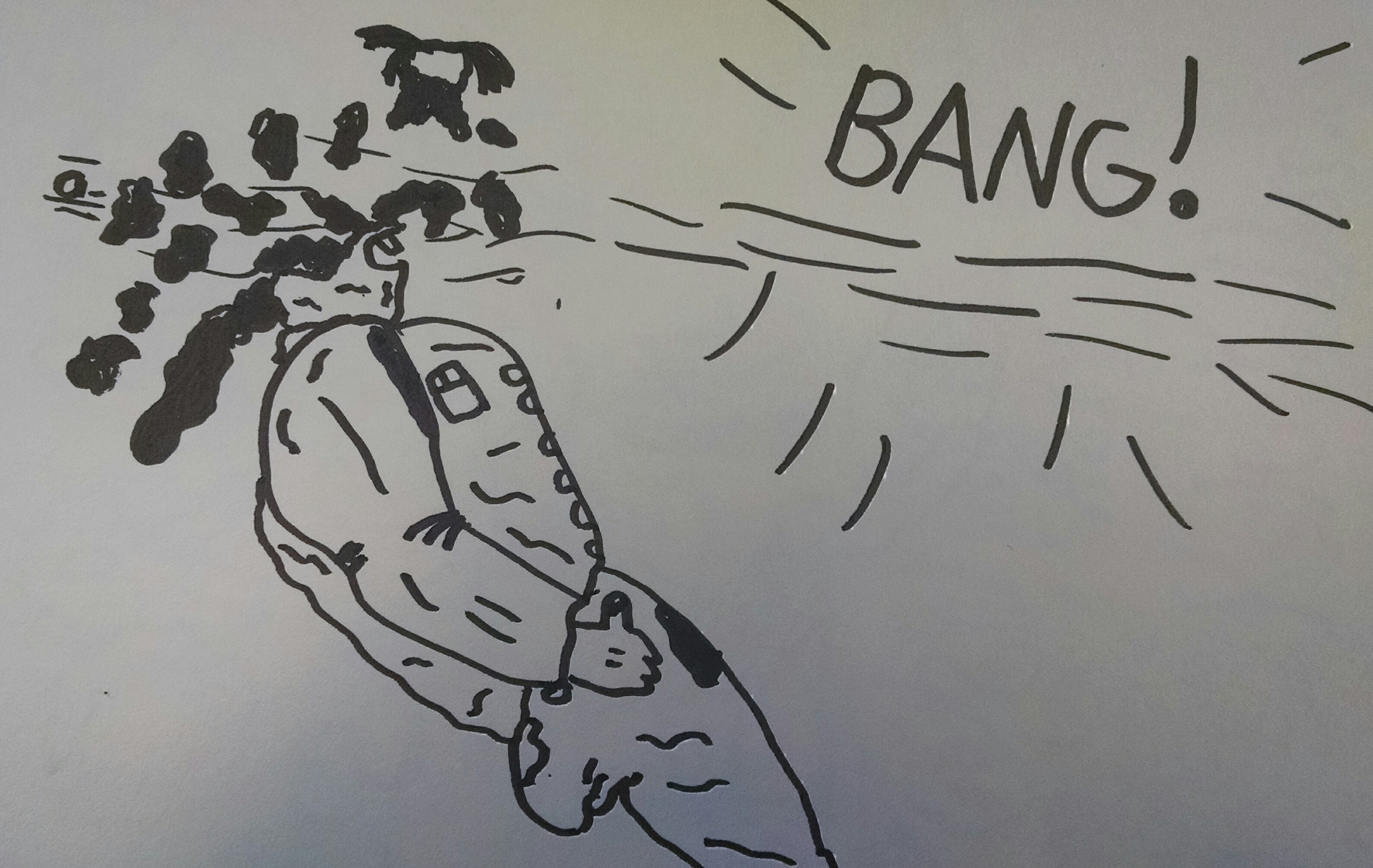 My jaw was hanging. I couldn't believe it. There was no mistaking it. That form, that perfect technique, that dead-aim headshot. It couldn't have been anyone else. No Scope Joe had killed Kim Jong-Un.

I couldn't sleep that night. Just laying awake thinking about that headshot. It had been played over and over again on every news outlet, not even pixelated or anything. Everyone was saying it was the CIA, but I knew the truth. And I wondered if No Scope Joe was able to get out alive.

Sure enough, my phone started ringing. Some weird number I didn't recognize. But I needed to answer it.

The line was worse than ever. So much static in the background. Maybe he was on a satellite phone. I don't know. Most of his talking got lost in the noise, but I was able to make out this much:

"CAN'T GET OUT OF HERE. WISH FAT PUSSY SCRUB BITCH HAD A MOM. AFTER-NO-SCOPE HARD-ON WON'T GO DOWN."

That was it. But maybe that was enough. What else was there really to say?

That's the last I heard of No Scope Joe. I don't know if he's been mowed down by the North Korean military, or if he's still out there stalking the night, pulling off headshots at every corner, a vigilante for the twenty-first century. Maybe he got out, and he's just laying low, planning his next move. There's no way to know for sure.

And so, here's to you, Joe, wherver you are out there. You did it. You no scoped like no one else. You're a real American hero. 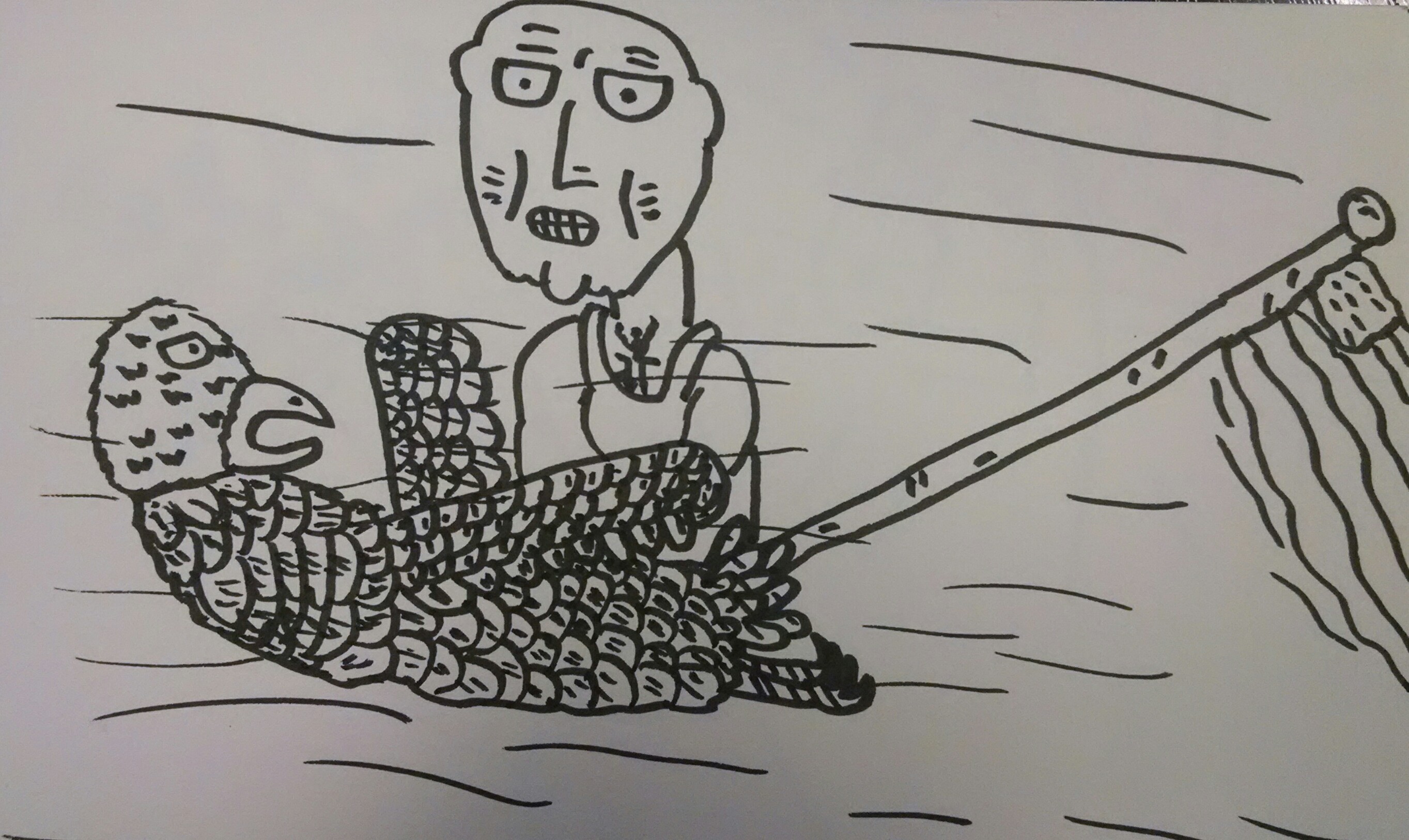