I’m not exactly making a progressive statement by stating that, of course. Tetris is ubiquitous these days. It’s on everything. Seriously. Every single piece of hardware that has the capability to accept software can play Tetris in some form.

Your microwave can probably run Tetris. Maybe even your thermostat.

Back in the 1990s, though, the average gamer looking to get a Tetris fix had comparatively fewer options available to them. The original Tetris was a release for home computers, but the Soviet mind game didn’t come into its own until it was packed in with the Game Boy in 1989. 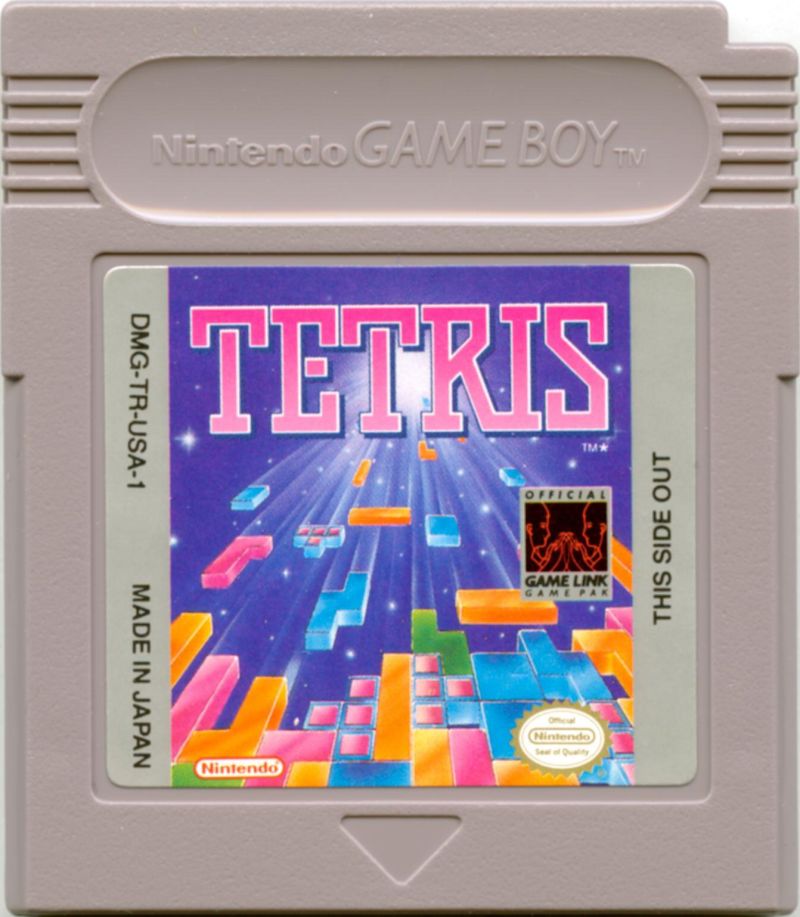 This little cartridge left a mark on the gaming industry that will probably never be overshadowed. It’s practically a perfect game – It’s easy to learn how to stack Tetris blocks and how to clear lines of them, but try clearing 4 lines at a time or T-spinning while you’re still a rookie.

After the Nintendo-published version of Tetris took the world by storm, there were bound to be sequels and different versions. We got a numbered sequel in the form of Tetris 2, but the less said about that, the better. There was also Tetris Blast, which involved clearing lines of blocks to blow up bombs that would clear the rest of the screen. That’s more of a spin-off than a sequel or port.

If you’re looking for a good port of Tetris that will truly be a unique experience, look no further than V-Tetris, on Nintendo’s Virtual Boy console. 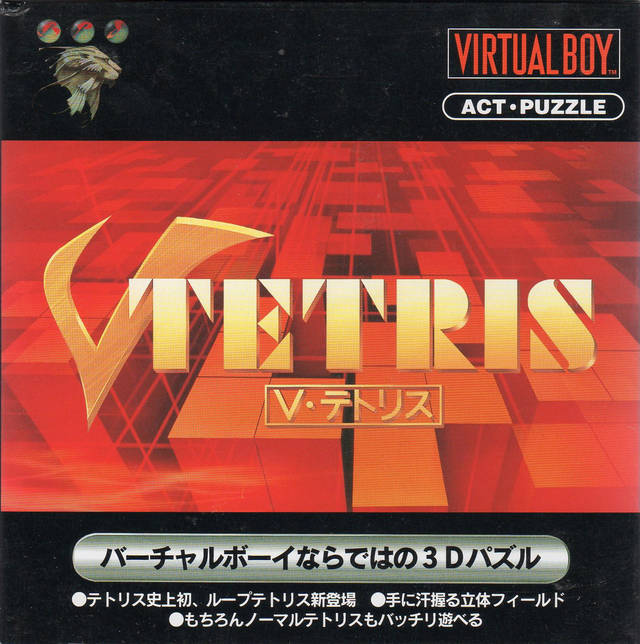 The Virtual Boy was Nintendo’s attempt at making a truly unique game console. Many think of it as a major misstep that hurt Nintendo’s image as a company that made quality products, but I think of the system as one of the most underrated consoles ever released. Yes, it has flaws, but the games are nice. Out of the 12 or so games released for the Virtual Boy, you’ve only got one or two that aren’t great.

V-Tetris was developed by Bullet Proof Software, which was a software company based out of Honolulu, HI. Their early releases consisted of RPGs for the MSX and PC-88, two home computers that never left Japan. Their logo is pretty unique – it looks like something out of a Yes album. That makes sense, because their logo was designed by Roger Dean, who made some of the best progressive rock album covers ever. BPS was no stranger to Tetris, as they were the company responsible for developing the Game Boy version of the title, as well as the NES and SNES versions. Chances are if you were a fan of Tetris when it was released, you played one of Bullet Proof Software’s versions. 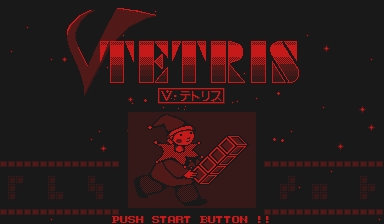 As far as Tetris games go, V-Tetris is more or less a straight-up port of Tetris, enhanced with Virtual Boy capabilities. These capabilities, by the way, include being in red-and-black monochrome and having depth effects when you clear a line. 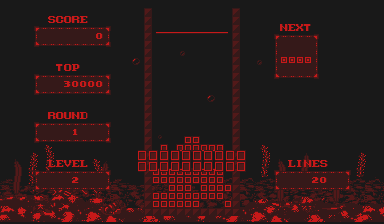 The gameplay is standard Tetris fare – rotate falling blocks into place, build them up, clear rows, and then they start dropping faster once you’ve got the hang of it. The Virtual Boy controller makes the process very easy, which may surprise some people, since you can’t see the controller while playing. 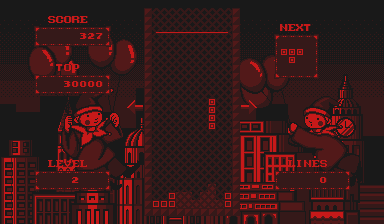 The Virtual Boy controller is an excellent piece of hardware, all things considered. The ergonomics are spot-on; almost like Nintendo’s later GameCube controller. You’ll never lose track of what button you’re pressing. Not that you need much for Tetris, but take solace in the fact that the controls won’t work against you. 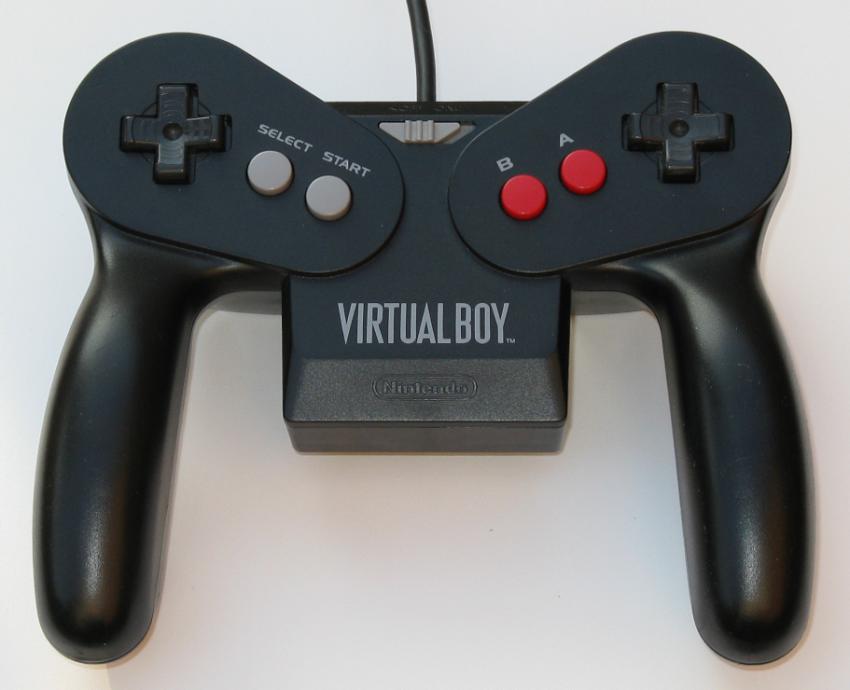 What will work against you, however, are your own eyeballs. 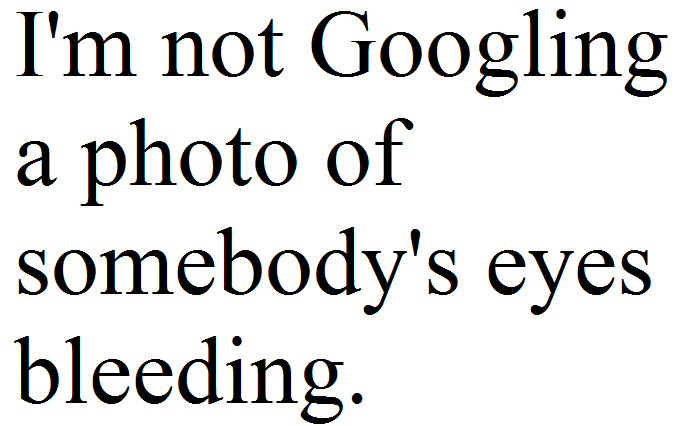 See, the biggest issue with V-Tetris is the fact that it’s Tetris on the Virtual Boy.

Stay with me, here.

Anyone who has even a passing familiarity with how Tetris works knows that it can be more addictive than a pint of Haagen-Dazs covered in heroin, and that fact works against V-Tetris due to the console it’s on. 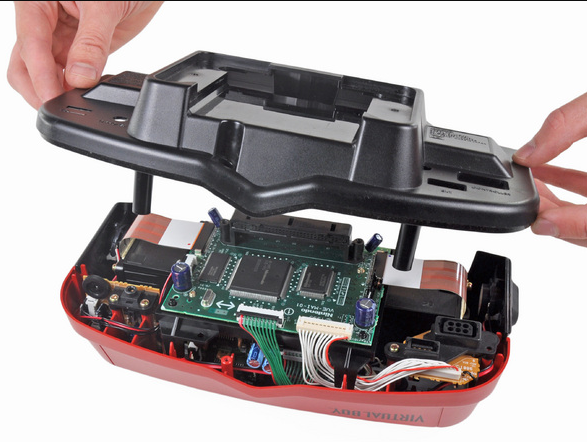 See, the Virtual Boy’s screen isn’t a screen, per se, it’s a bunch of red LEDs being reflected across mirrors that you see through two separate eyepieces. The left and right images have certain objects rendered slightly different from each other, which creates an illusion of depth when viewed together. It’s the same sort of tech used in a ViewMaster, only with moving images. And in monochrome. The system uses red LEDs because other colors were prohibitively expensive at the time (and, in the case of blue LEDs, they were practically nonexistent, at least at a size that would work with a game console). This gives the console a unique look, but also makes it an absolute nightmare for the average person’s eyes to process. Nintendo recommended that people play the Virtual Boy for a maximum of 10 minutes at a time to avoid eye strain.

With something as addictive as Tetris, go ahead and try playing for less than 10 minutes when you’re in the zone. Go ahead. It won’t be easy.

The VIrtual Boy library is pretty interesting, and well worth a look. Seriously! That's not me being ironic. A lot of people are quick to dismiss the console just because it sold poorly, but this system actually has some quality games on it. V-Tetris is definitely one of them.

Just get used to taking a break. Your eyes will thank you for it.