The Silver Case remaster has a puzzle auto-solve button. Plus, BotW complaints! 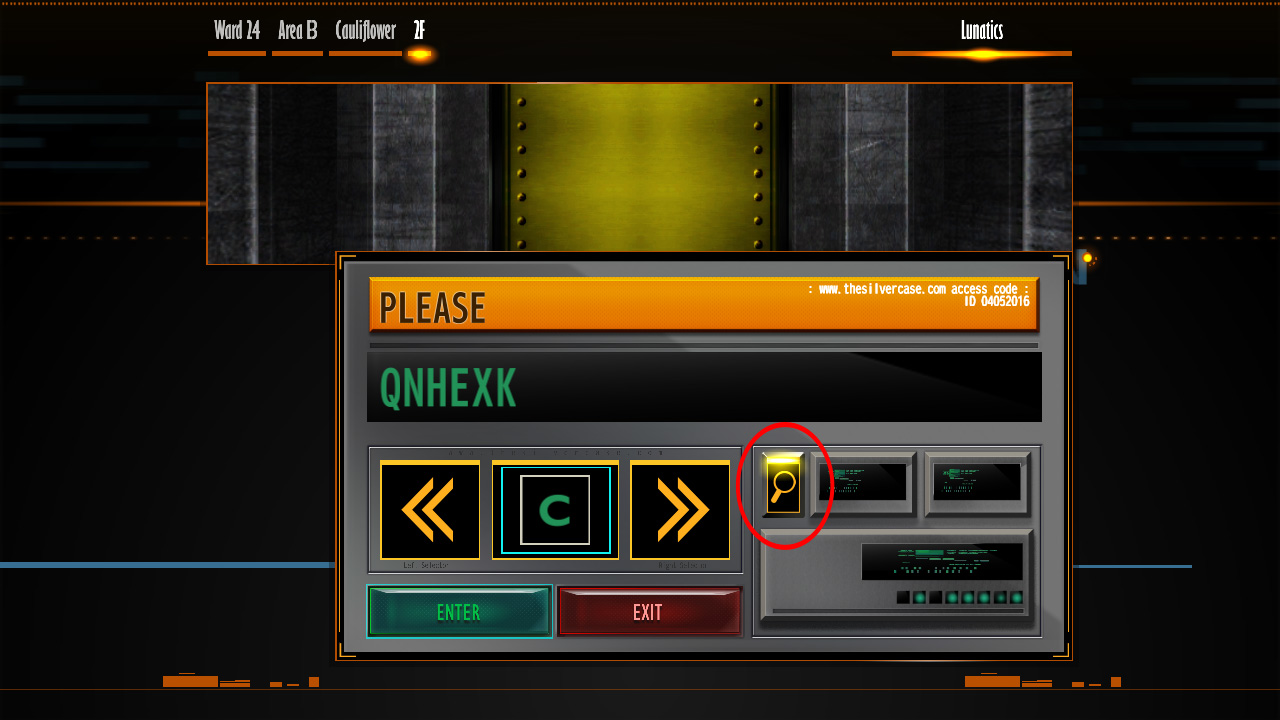 I just started playing The Silver Case. The first level has tedious data-entry puzzles. Not even puzzles, really, just busywork. Well, okay, it’s an early Suda game, that’s to be expected, great, but the problem is, this new remastered version has a button that lets you skip these puzzles! Why?!

Don’t they know?! Don’t they understand the delicate sadomasochistic relationship between game and player? To force the player to slowly enter a fifteen digit code into a decoder, and then re-enter the new de-coded code into a control panel, is a torture we Flower Sun and Rain fans all pleasure to partake in, but to have to stubbornly insist on doing it while there’s a button right there on the control panel, that instantly enters the data for you with a single input, that’s just cruel!

Well, anyways, I’ve determined from now on to ignore that button, and I’m excited to finally play this game, which I’ve been looking forward to since it was first rumoured to be coming to the original DS. It is, so far, a weird and archaic game, and the story is confusing, but I’m still expecting to like it in the end. Suda’s games have followed a pretty clear trend, in my mind, with Killer 7 (my favourite game) and No More Heroes being the peak of his career, and with the games he made after that being increasingly weird-for-the-sake-of-weird accessible action games that he put his name to but had less and less actual involvement in, and the games he made before that being more rough, and obtuse, but ultimately very rewarding. Here’s a graph I just made of Suda51 game quality to illustrate:        :D 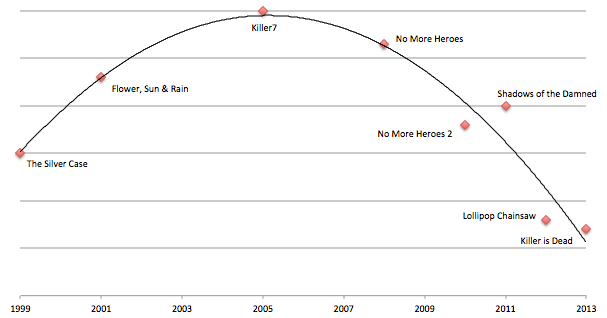 So hopefully The Silver Case will be about as good or better than I’m assuming, based on that trend. Anyways, I bought the limited edition release from the NIS America website, which is still showing 6-10% left in stock. It was a little expensive to ship to Canada, and the limited edition contents aren’t really any better than, say, what XSEED released with all copies of Killer is Dead, but it’s cool to own for this game (which I actually hadn’t realised was getting a physical release at all), so for anyone interested, I’d recommend ordering that before it’s too late.

On another topic, I finally finished The Legend of Zelda: Breath of the Wild, after well over 100 hours. Rather than write a review, I figured I’d just write a list of complaints I have with the game… 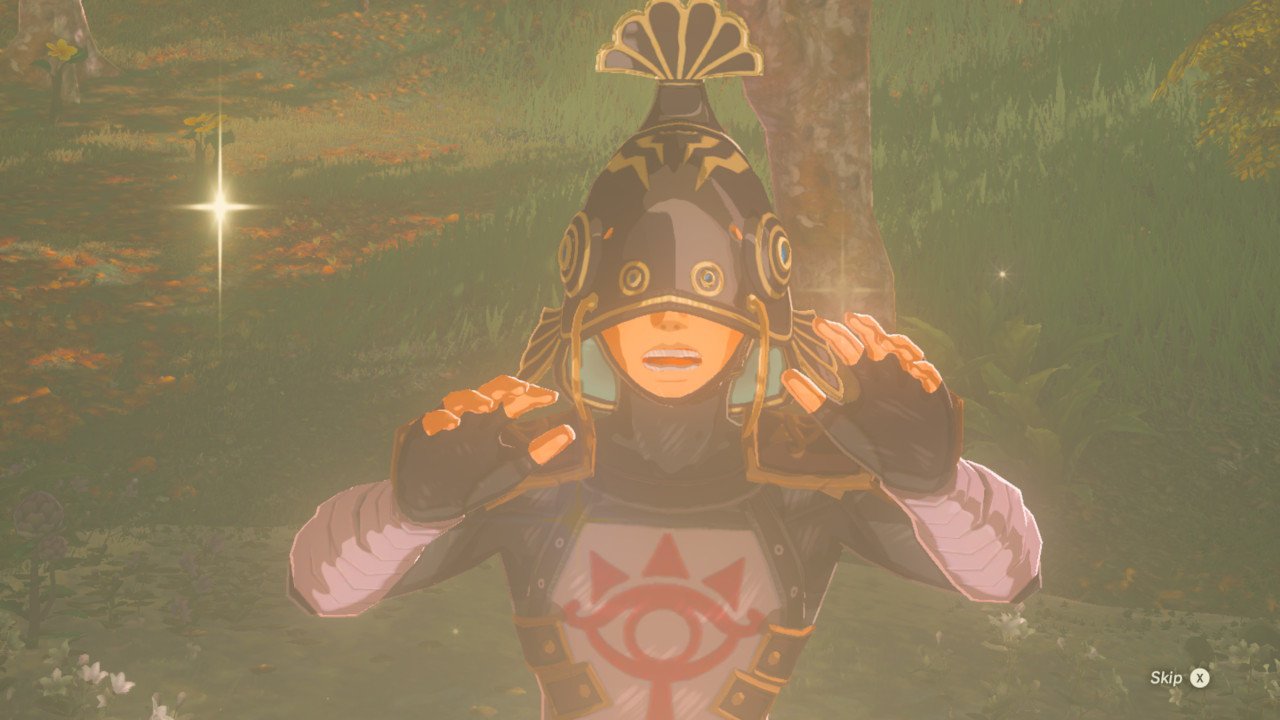 Okay, it’s actually a great game by the standards of other triple-A open-world games, and I obviously enjoyed it enough to see it through to the end (highlights include Bolson, the Tarrey town quest, some of the other side-quest dialogue, and suddenly wandering into a whole new village 100 hours into the game after I thought I’d seen just about everything), but as someone who considers the 3D Zelda games my favourite videogame series of all time, this game misses too much of what makes the Zelda series special to be considered in the same league as any of the other 3D console Zelda games IMO. I never felt that same magic I usually do when I play these games, most recently in exploring Skyloft for the first time.

I’m sure many will disagree with me, depending on what you personally value in a Zelda game. But this narrative going around that Breath of the Wild is near-universally considered one of the best games ever except for a few attention-seeking detractors with only petty complaints, is just not true. Yes, some of my complaints will be petty (and tongue-in-cheek, so don’t hate me), some not so much, but together they add up to, what I would say for me, is definitely a flawed game. So on with the complaints! 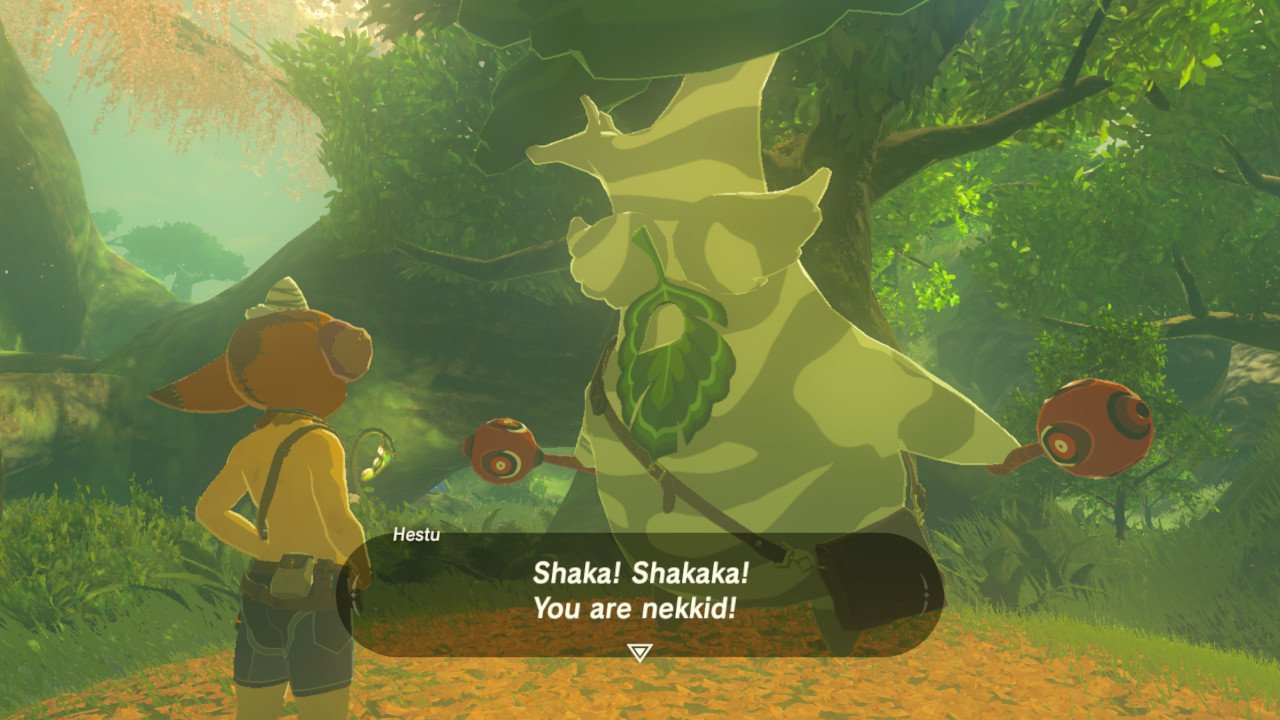 There’s this stupid needy little snot-nosed brat kid in Hateno village who wants me to show him all these specific weapons. Every time I come to his house the little bastard is sleeping and I can’t wake him up so I just have to wait. I find this Zelda game has a lot of staring at children sleeping, but whenever I tell people this, they act like I’m the weird one, and not the perverts who designed this game. 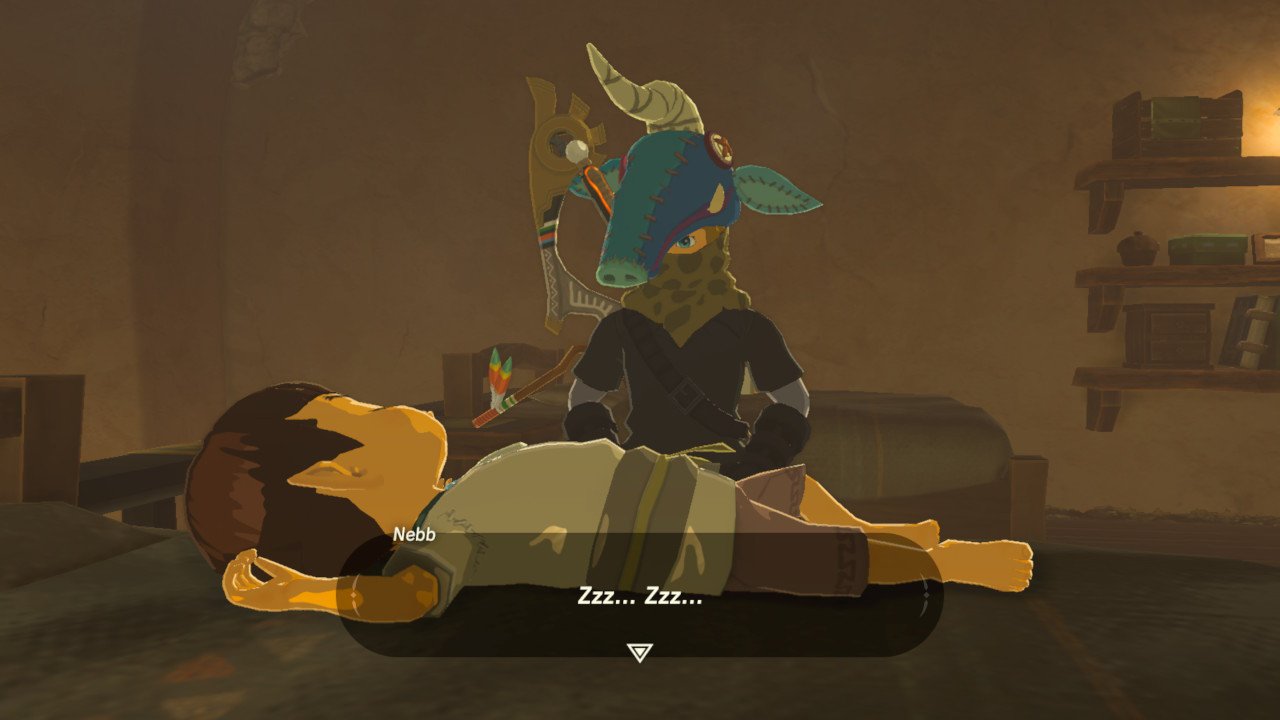 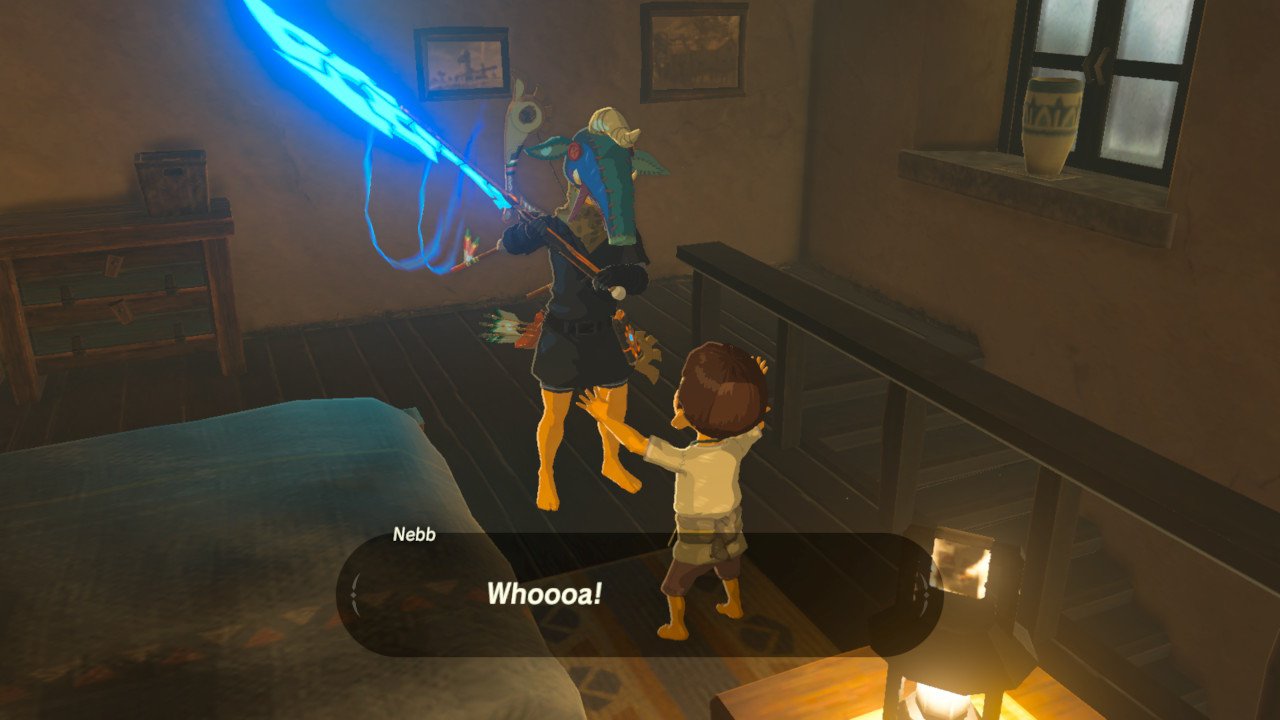 I later broke my Ancient Short Sword after hitting a metal ball a few times. In conclusion: 7.9/10   <3

UPDATE: This blog is ten days old now, and probably nobody’s going to see this, but I’d like to add my final impressions of The Silver Case, since I don’t feel like writing a separate blog post just for that topic.

Alas I would not rank it as highly as suggested in the graph I made here, and in fact would rank it well below Killer is Dead. I didn’t really like The Silver Case. The game’s story didn’t make very much sense to me at the beginning, and still didn’t at the end of the game. And the story’s all there really is – I talked about puzzles in this blog post, but the truth is, there were about as many “puzzles” in that introductory chapter as the rest of the game combined. Mostly it’s just a graphic novel, with interactivity limited to some walking and clicking on things. Usually, the most you have to do is go and ‘click on’ something to proceed the game, like, you have to go talk to a turtle to advance the story. Don’t expect to have any choices or agency in how the story plays out, like newer games in the genre.

Well, that’s fine, it’s a unique way to tell a story, the way Suda wants to tell it. But the story is sooo convoluted and impenetrable. And this is coming from someone who loves Killer 7. First of all, the characters are represented by still drawings, and tend not to even look like the same person, when you see them in different drawings. Basically you’re expected to remember a whole web of characters based on their names, and that’s way more Japanese names than I can handle. Beyond that, the game almost never tells you explicitly what’s going on, and when the game does give you backstory, it’s usually weird and laced with unexplained acronyms for made-up departments of government, and god knows what else. Then there are whole chapters, ‘cases’ you take on, which seemingly have nothing to do with the overarching storyline, and are equally without any kind of satisfying resolutions of their own.

Some positive points: The music is great. Even if I didn’t understand the plot very much, it was kind of strangely compelling in some ways. There were characters I liked. And the atmosphere is often commendable; even when the story wasn’t well communicated, the game often communicated a sense of dread, or of paranoia in the early days of the internet, which I found quite interesting. And the remaster is great: for obvious reasons I don’t imagine this was an easy game to simply port over and clean up the graphics on, but I’m very impressed by the end result. It’s a game unlike anything I’ve ever played, in terms of its mechanics, its interface, or its combination of 2D art, 3D environments, and CG, anime, AND live-action cutscenes, and the port puts it all back together in a way that I believe is both true to the 1999 original, and looks nice and sharp in 2017.

It’s a game I can’t really recommend, yet at the same time I don’t regret playing it myself, nor do I want to discourage people from trying it, if they’re brave enough to be interested in an 18-year-old esoteric Japanese visual novel game in the first place. I think there’s an audience for this game out there somewhere, and even though I’m a big Suda fan, I must reluctantly admit… I don’t think I’m it. ...In conclusion… 5.5/10!