During the 1980s and 1990s, Square was known for producing popular JRPGs, platformers, and rail shooters. They published and developed popular games such as Chrono Trigger, Xenogears, Parasite Eve, Romancing Saga, the ever-so-popular Final Fantasy and Kingdom Hearts, and more. They even collaborated with Nintendo to develop Super Mario RPG, which is another cult-classic.

When it comes to fighting games, it is quite uncommon with Square at the time. But all that changed in 1996 when Square teamed up with a developing team that was lead by a veteran designer to make a PS1 classic, followed up by a sequel that currently holds the record for the largest character roster in fighting game history. Tobal No. 1 was released for the PlayStation on August 2, 1996 in Japan, September 30, 1996 in North America, and January 1997 in the PAL region. It was developed by DreamFactory, making it not only the first game that they developed since they were formed in 1995, but also the first release by Square on a CD-based console. While Square published the game in Japan, it was published by Sony Computer Entertainment in other regions.

Seiichi Ishii was the director and designer for this game. In the past, he was known for being a designer for the first Virtua Fighter game, and the first two Tekken games where he also served as the director. Art design was handled by Akira Toriyama, who is widely known for the popular Dragon Ball series, Dr. Slump, Dragon Quest series, and Blue Dragon series.

The gameplay’s core mechanics was based on three attack buttons (High, Mid, Low) and a guard button. Each character has the ability to dash jump, and has a unique grappling and blocking system that offers a different variety of throws and counters. The arenas in this game are traditional ring-outs, much like Virtua Fighter and Soul series.

Tobal No. 1 has a Tournament mode (which is this game’s arcade mode), Versus mode, Practice mode, and the Quest mode. The Quest mode in this game is well-known for incorporating the game’s fighting controls with dungeon-exploring. Basically, this is the mode where you have to unlock certain characters in the game.

If you are able to complete Udan’s 30-Floor Dungeon level, you can play as Tori-Bot. Tori-Bot is alternatively named Toriyama-Robo, which is named after Akira Toriyama himself. He is not seen until at the end of the dungeon in Quest Mode.

Both the North American and Japanese versions of Tobal No 1 comes with an extra disc containing one demo and several videos of upcoming games from Square such as a playable demo of Final Fantasy VII, and watchable videos of Bushido Blade, Final Fantasy Tactics, and SaGa Frontier.

The game’s soundtrack brings a blend of hip hop, jazz, ambient, 80s groove, and latin. It was composed by eight of Square’s composers: Yasunori Mitsuda, Yasuhiro Kawakami, Ryuji Sasai, Masashi Hamauzu, Junya Nakano, Kenji Ito, Noriko Matsueda, and Yoko Shimomura. The soundtrack was released on August 21, 1996 and it contains 21 tracks from the game, plus one bonus track that was unreleased. A remixed album was released shortly after.

As for Tobal No.1, the game gained several positive reviews. The game received praise for running in 60FPS and incorporating RPG elements inside a fighting game such as this one. Although Revengers of Vengeance (aka Battle Fantasy) was the first to incorporate RPG and Fighting game elements, Tobal No.1 did it right.

It sold over 650,000 copies in Japan, mostly due to the inclusion of Final Fantasy VII demo that came with the game. While the game was well-received in North America, it didn’t sell well.

Because of the sales, it sparked a sequel… only in Japan. 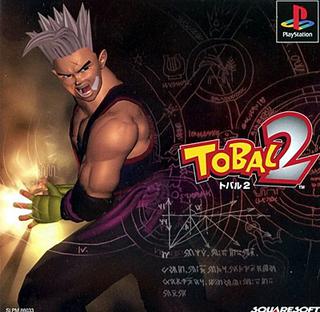 Following the success of the first game, DreamFactory and Square released Tobal 2 on August 25, 1997 for the PlayStation only in Japan. The game came out on the same day that Sony released the Dual Analog Controller in Japan, making it the first game to be compatible with it.

The gameplay remains unchanged from the first game, so not much is to be said. However, they added an unblockable fireball attack for every character in the game. As for the graphics, they have been improved from the first game thanks to the power of Gouraud shading while still maintaining the 60FPS gameplay.

Quest Mode returns in Tobal 2, but it gives the player more to do this time around.This time, the player has six dungeons to conquer as their main objective. Another main addition to Quest Mode is giving the player a chance to explore town that allows the player to eat, sleep, and shop, which makes it feel more like a RPG.

In the dungeon, you have to face a variety of monsters. Defeating said monsters will make the drop items, such as food, stones, potions, money, or weapons. Characters can gain experience based on each body part, attack, or defense that is used. Stones and potions are used to increase attack/defense, while food is used to increase guard experience while the stamina bar is nearly full.

After defeating the monsters, you have the option of capturing them for use in versus mode. They can be captured by throwing a purple stone at them when they have low health, similar to using Pokeballs in Pokemon. You can use the churches to save your game.

As for the characters in this game… Oh boy, there are a lot of characters. You guys think that fighters such as KOF14 (54 Characters), Tekken Tag 2 (41 Characters), Smash 4 (58 Characters), and Street Fighter X Tekken (55 Characters on PS3/Vita) is too much in fighting games? Those are just amateur numbers.

Tobal 2 has a total of 200 characters. Yep, I am not making this up. No, I’m not gonna name all of them. There are a total of 200 characters in Tobal 2, which currently holds the record on Guinness World Records 2011 - Gaming Edition for the largest character roster in fighting game history. Some characters in this game are unique, while others are palette swaps with higher attributes. The Chocobo from the Final Fantasy series makes an appearance as a playable character.

Yep. Chocobo in a fighting game.

The soundtrack for Tobal 2 was handled by Takuyaki Nakamura, who was known for composing music for games such as the first three Virtua Fighter games (and VF Kids), Ehrgeiz, the arcade version of Michael Jackson’s Moonwalker, and Outrunners. Jazz, funk, and Rock were the main inspirations for the soundtrack.

Tobal 2 was supposed to have a North American release, but it was cancelled. There are some theories on why the game got cancelled. One of the representatives from Square said that it was due to the disappointing sales for the first game, and the assumption that people only bought the game to play the Final Fantasy VII demo. Another one said that various third-party companies wanted to publish the game, but Square refused to license the game to other companies.

It was confirmed by Square-Enix on an issue of Official U.S. PlayStation Magazine in 2006 that reason why the company never released Tobal 2 outside of Japan is because the PlayStation’s limited memory prevented the English dialogue from fitting inside the game’s text boxes. However, a fan translation of the game was completed three years before Square-Enix made that statement.

Like the first game, Tobal 2 gained high praise since it was the game worth importing. Although it doesn’t stand a chance competing against other fighters such as Tekken 3, Soul Blade, Dead or Alive, and Fighters Megamix, it still stood on its own.

The first two games were re-released in 2007 as part of Square-Enix’s Legendary Hits label. A mobile port, titled Tobal M, was released in December 12, 2007 for mobile phones in Japan only.

So what became of DreamFactory, the developing team that made the series? They’re still around, just not as active. They developed several games such as Ehrgeiz in 1998, The Bouncer in 2000, Crimson Tears in 2004, and Appleseed EX in 2007. Fun fact: The Bouncer used the same controls from Tobal.

They also developed the UFC Tapout series and Kakuto Choujin on the Xbox. Kakuto Choujin was removed from the shelves due to accusations of offensive religious content. Fans and critics alike panned this game for being a Tekken rip-off, even though this game was made by former Tekken developers.

As for the Wii, they were responsible for developing Toshinden War Budokai, which was previously covered on an earlier Unsung Fighters. They recently released a Android/iOS port of Xevious:Gump of the mystery was solved all back in 2016.

DreamFactory not only worked on games, but they also worked on animation such as Zoids: New Century and the 2004 release of Appleseed. They also have a program called LiveAnimation, which you can use to develop indie games of your own.

Why is Tobal Unsung?

Tobal was Square’s first incursion in the fighting game genre, paving the way for other fighters such as Bushido Blade, Ehrgeiz, and the Dissidia Final Fantasy series. It mixed fighting game mechanics with RPG elements and dungeon exploring that made the game replayable. The sequel had the largest character roster in fighting game history, with over 200 characters to choose from.

If you want to check out the Tobal series, you can easily find the first game at eStarland for like $15. As for the sequel, I recommend downloading an PS1 emulator and a ISO that contains the English translation because you will need it for Quest Mode.

Until next time... Train Up, Fighters!