Hello, hello, and welcome to another Friday! The weekend is drifting towards us like the well-awaited spring breeze, and I'm ready to show off some games. Enough with the introduction - you didn't come here for an introduction, you came here for games!

Adaran in a 2D endless runner with two options: jump, or double-jump. Quite the selection, huh? Surprisingly enough, you can manage quite some control, being allowed to control the height of both the jump and double jump. The objective is the same as any other endless runner game: get as far as you can. You see, there's a tiny problem with that. It's virtually impossible to get very far.

All of the obstacles - from gaps to anything in the air - all show up with no rhythm corresponding to each other, meaning that there end up being a lot of moments where something is impossible to dodge without hitting something else. That leads to a lot of deaths. Like I said, you do have a good deal of control, but the game still feels like it has a great deal of unavoidable situations. Is it a deal breaker? Not entirely. It just makes playing the game better in short spurts as opposed to sitting down and trying to obtain a high score.

Oh, and did I mention this game took place in hell? Because it does, and the aesthetics for it are spot on. The pixelated art design is great, with all sorts of demonic creatures to dodge and the player character being a sort of ghoul himself. The visuals are great, but what about the music? Hell yes! The track sounds like something straight out of Shovel Knight, which is always a good comparison. 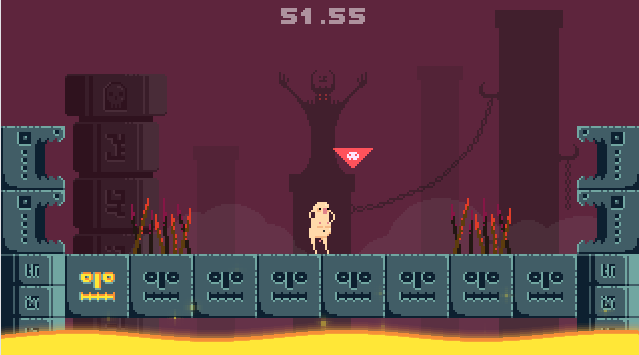 Minute of Rage is one of those games meant to make you mad. I mean, it's in the title and all. What you have to do is simple: dodge everything. Spikes coming up from the ground, blocks disappearing from beneath you, energy balls shooting high and low, and eyes raining laser-y death from above all have to be avoided.

It's got solid gameplay, with a very easy to control player character. Nothing fancy, just running and jumping. That being said, this game does have legitimate difficulty. You really do have to be paying attention to all the different things it throws at you, and it's not like the game throws it all at you at once. It simply builds up to throwing everything at you at once!

The game does have a certain charm to it that I really do enjoy. The way the player character is naked and swings his hips for his idle animation is funny, and the cutscene where Satan tells him that he's stuck in hell forever was also a comedic little bit. The only bad thing I can say about Minute of Rage is that there's no music. The sound effects are satisfying and fitting, but the lack of music really takes away from the tone. 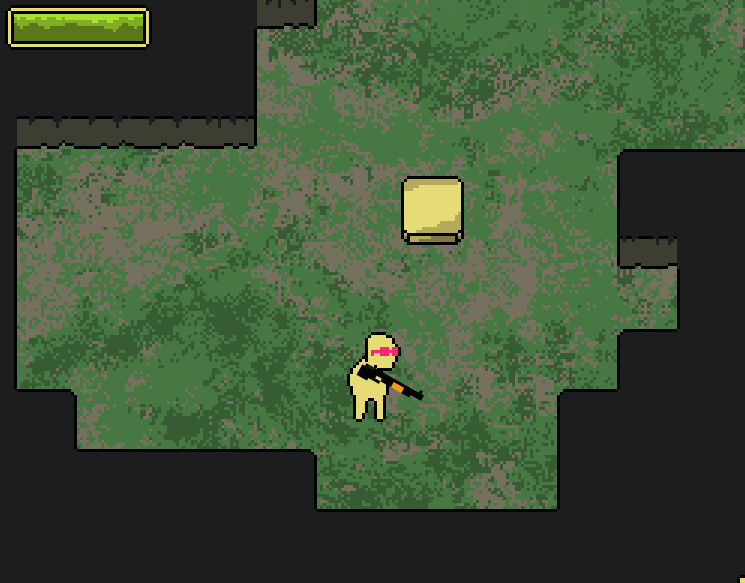 Pamp Gun is a top-down arena shooter, where you shoot your way through a variety of enemies with a single-shot shotgun. Not too hard, right? Wrong. This game is very hard, and stupidly so.

Pamp Gun is a game that fails at the start: choosing a control scheme. In most top-down shooters for the PC you control the character's movement with the keys and the direction you shoot in with the mouse, with maybe a button for reloading, right? In Pamp Gun, you control everything except reloading with the mouse.

Using the mouse to shoot and run around between shots isn't bad. If anything it makes it feel a bit more realistic, as most people never shoot a gun while running around anyways. The terrible part is the reloading. The game wants you to slide your fingers along the s, d, f and g keys, but apparently that's difficult for the game to pick up. Pressing all the keys at once works, but it takes forever to figure out you have to do it twice (as to mimic the pumping of a shotgun). It's difficult to manage and takes time to get used to, which is a huge problem to work through, but once you get used to it it's not horrible.

Aesthetically, Pamp Gun isn't half bad. The player character looks kinda cool, being really nondescript without his pink shades. The pixelated art style makes the world look grimy, which I think fits a game all about shooting gross, grimy creatures. The music is pretty energetic, too, making you feel as if you're in arena fighting for people's viewing pleasure.

And there you have it folks! Another Friday, another three flash games! All of them are free, but what else would you expect from FreeWebArcade?