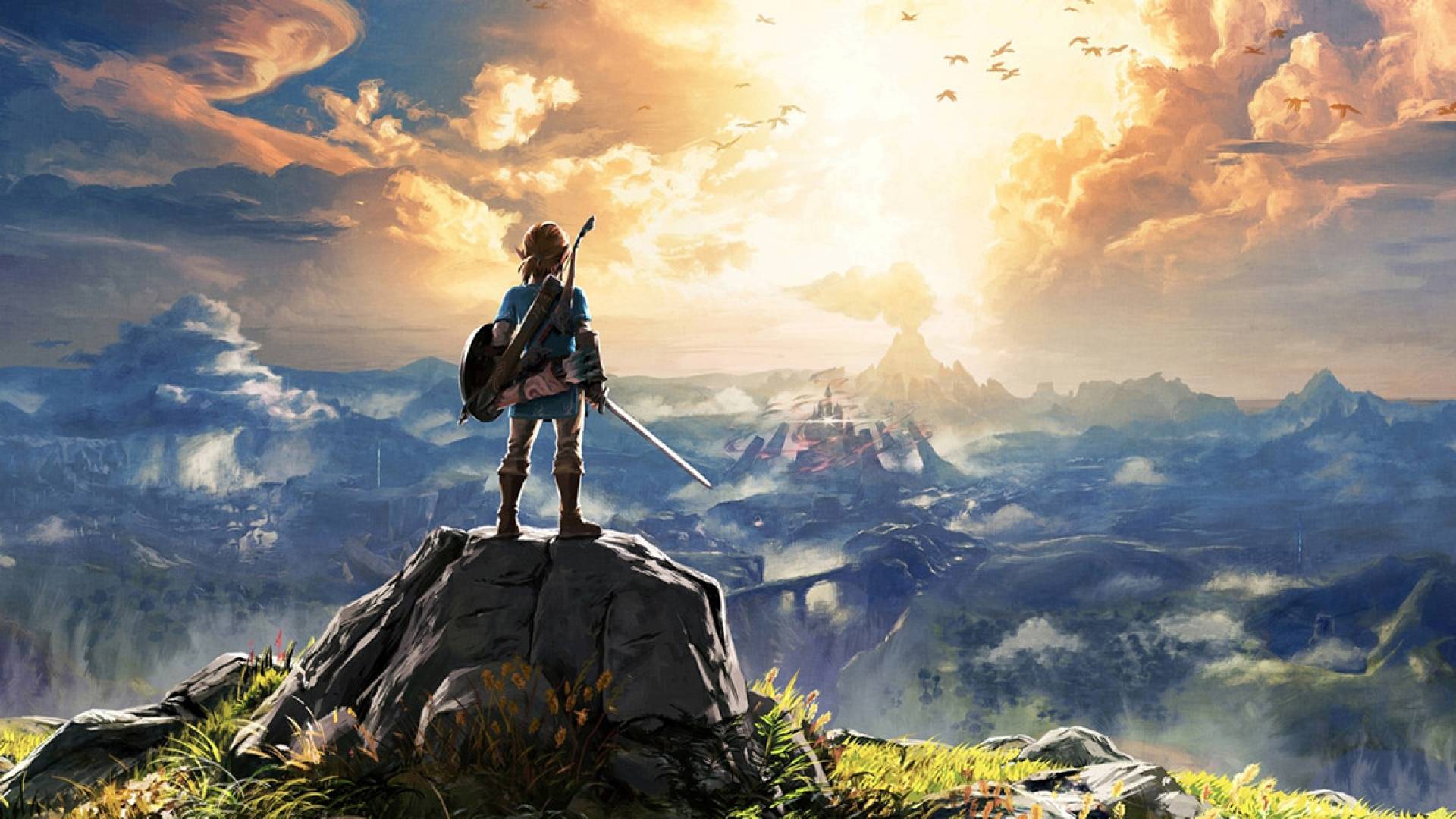 Would you assume there aren't spoilers to be hand 'round here? Well, there are plenty of screenshots to enjoy. So, don't expect your virgin eyes to be spared completely. I spent a lot of time trying to nail down precisely why I find Breath of the Wild to be as good as it is without bullet pointing a bunch of epic encounters, but I did also need some pretty bookends to my paragraphs.

With that said, boy am I loving the ever living fuck out of this game. 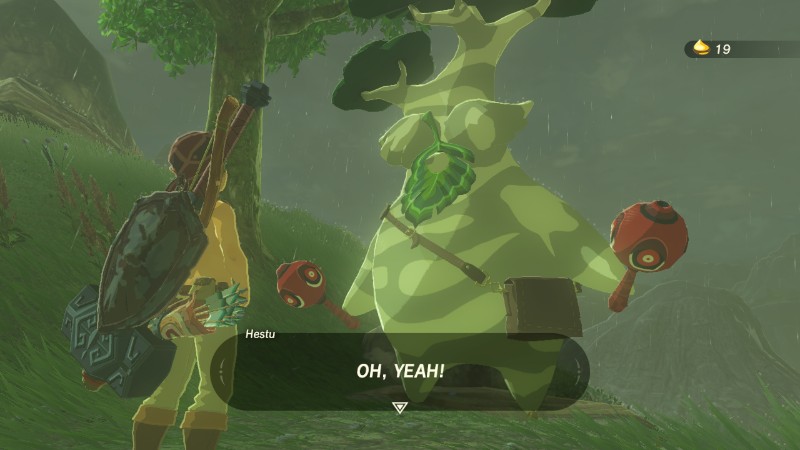 Amidst all the recent kerfluffle with the Switch launch, I must admit I sort of forgot I've had a Wii U since its launch and that this brand spankin' new Zelda title would be on said Wii U as well. That I had a shot at playing Breath of the Wild before my eventual Switch purchase.

Nay. I could wait. What's the harm in letting the hype decipate and my friends within this lovely community chug through all the potential issues whilst I digest them for future reference? Who cares if they may explode with words about how awesome it is every few minutes? Nay. I had plenty of games to play. I...

The pull was impossible to ignore. A new console Zelda is a special occasion. It's like welcoming a new pet into the family. Or your tax returns. This could be a big, great thing and it requires attention. So, I bought the digital Wii U version on a bit of an impulse (that I could swear would never go away) and, in the end, I do not regret humoring that impulse in the slightest.

Breath of the Wild isn't just the next iteration of what started with Twilight Princess. It is far, far grander than that. This is the most chunky Nintendo game currently available and it even eclipses some recent AAA publishers' joints. To that, in many ways, the game feels surprisingly un-Nintendo, yet simultaneously so very Nintendo.

Would it be appropriate to say that this is Nintendo's most ambitious release since Ocarina of Time? It'd be crazy to assert that the jump from 2D to 3D could ever possibly be topped, but I believe it's at least come somewhat close. 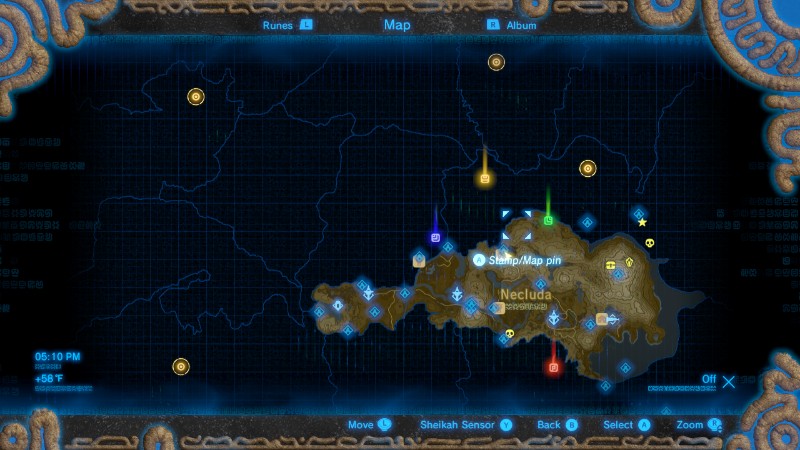 Approximately 25 hours in, this was my map. Yuh. This game is fucking gargantuan.

Upon approaching my third region (what you see above is just two), it had already felt as if I had been through what most games would call a complete journey. I concured a handful of particularly treacherous Shrine Trial Quests, trembled before the might of the Guardians and (even worse) the Lynels, spanned various biomes through all sorts of nasty weather, brought peace to a corrupted deity with only my bow, and made some friends when I could spare the effort.

All without touching a single one of the game's supposed 4 (5?) major dungeons. I tell you, I'm uproariously giddy thinking what I could possible find as I continue onwards. 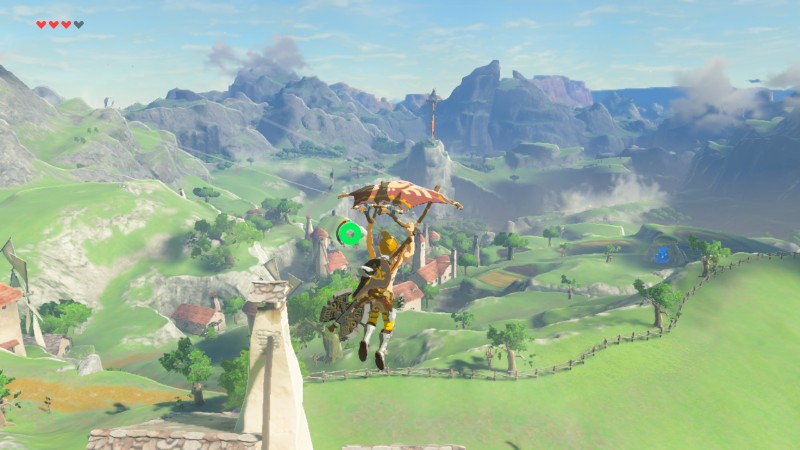 But, what has propelled me all this way? It isn't merely the promise of more content. What I have found in Breath of the Wild is a Zelda game built specifically for me. For what I look for in video games, this game is nearly perfect. Dare I say, I have even grown fond of the weapon degradation.

In fact, what may be annoying to some, I actually find integral to the experience. Weapons do, indeed, typically break very quickly. However, there is a very satisfying loop of degradation > replacements > reward and with those rewards being consistently enticing because the game's various economies are fairly tight. Even arrows are a surprisingly uncommon commodity. I genuinely welcome a chest containing 10x basic arrows after having bothered rustling through a small horde of Bokoblins.

By this point, I am more attached to this gameplay loop than I am attached to most weapons. The only ones I find myself really attached to at all are the weapons I obtain from rare loot caches or upon completing certain shrine trials. Those weapons, given their power, will either last you far longer or grant you security within some of the more difficult areas of the game. A reward all its own because Breath of the Wild is the hardest a Nintendo game has been for me in a very very long time. 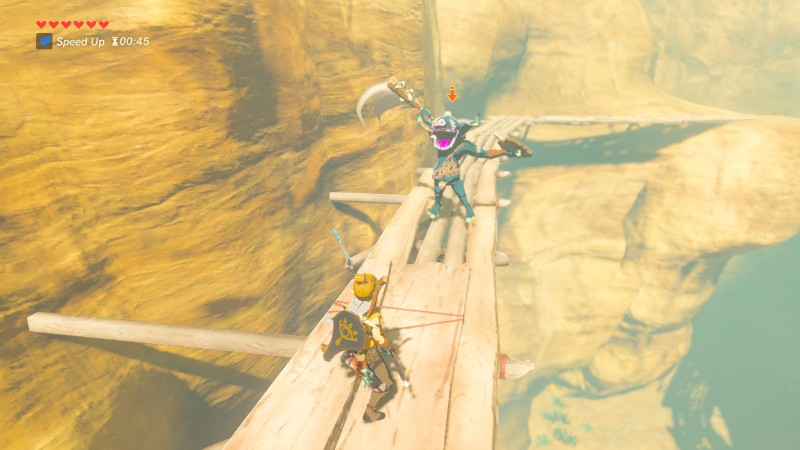 Now, I won't beat around the bush. There have been a few nonsense instant deaths. A Lizalfos striking off 5-6 hearts from a simple arrow is just a tad unbelievably too far and many of the early armor pieces don't offer much of a safety net. However, for the most part, the game is generally gratifying in its challenge. Successfully ragdolling enemies away from the horde into charging up a tornado strike with your double axe to clear out the rest makes for a lovely time. So lovely because you take risks with your more complicated maneuvers and having them connect is a heck of a thing.

The combat is also far looser this time around. I can effortlessly go from barraging a few baddies with bomb arrows to finishing them off with a quick boomerang toss without relying so heavily on the iconic Z-targeting. Previous Zelda's were never quite known for their glorious combat, moreso what they did with scale, art, and mechanics. A staple of Japanese game design, to be sure. However, with Breath of the Wild, the franchise takes a huge step towards being equal parts quality action and adventure. 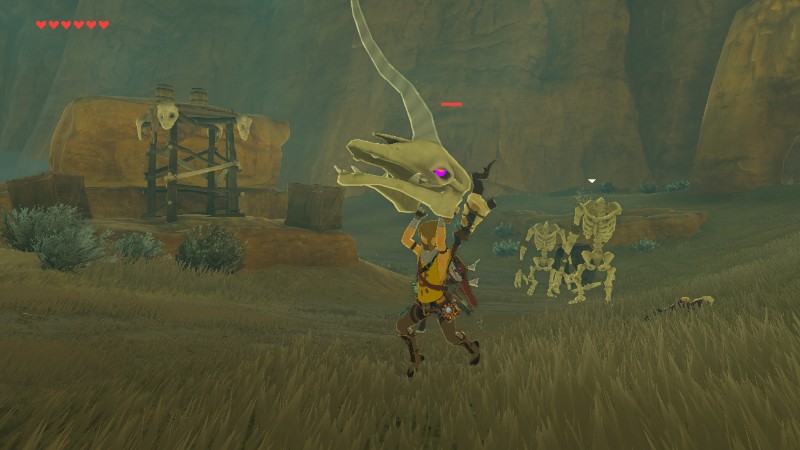 Because of the newfound open-ended nature of the game, level design is often quite different than in past Zelda's. Encounters range from the typical fare you'd expect from the franchise to camps peppered around ala Metal Gear Solid V. You'll also find enemies sparsed around at random. Every single one of these spaces can be approached in a variety of ways and there's not always an "easy" way out. Sure, early on, you'll be tempted to bomb your way through with either one of your bomb runes, but that quickly devolves into a scatter tactic as enemies become faster, beefier, and more powerful.

To give you an idea, let me paint you a scene... 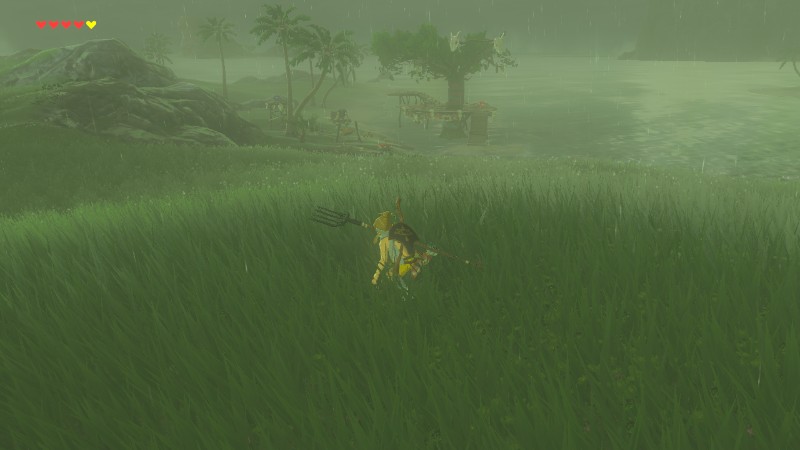 I'm twiddling around Hateno Beach. Beautiful vista, even in the pouring rain. I want to clear out a camp for some antsy Hylian vai (that's "woman" in Gerudo, as I've learned) who says some nasties are jacking her sheep. Sounded like a throwaway time waster, until I snuck up to survey and noticed not only some tougher Bokoblins but a high-tier Moblin. I wasn't about to crash that party. Not yet, anyway.

I decided I would wait until night, when most of them would be asleep, so that I could sneak in and at least take out the Moblin without a sound. For this, I needed a campfire.

Only, my campfire wasn't being set. I smacked some flint near my wood bundle and... nothing. A second time, still nothing. Finally, I thought "... is the rain preventing the spark from starting a flame?". So, I headed towards a nearby cave and... voila! 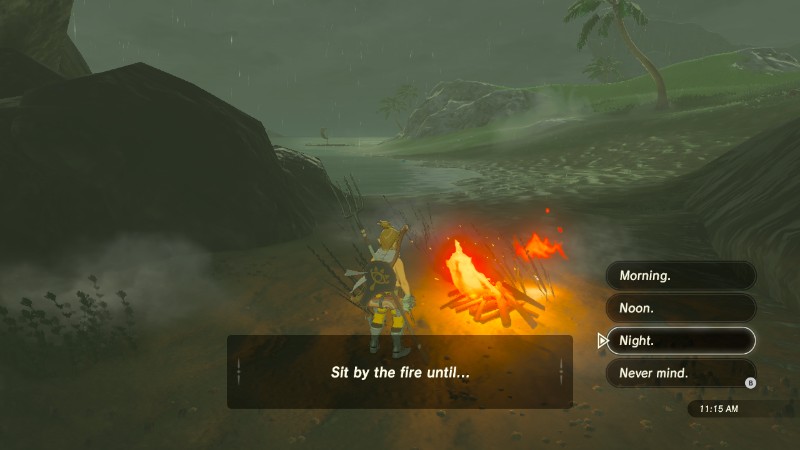 I felt like a real survivor man! That sort of satisfaction isn't a novelty within Breath of the Wild, it's almost the norm.

The game does feed you some pretty handy tips during loading screens, but many of its mechanical nuances are left up to you to discover. Some of which are useful during combat (such as using elemental Chu Chu jelly as traps), some of which are just quality of life niceties (such as wind blowing the embers of a flame in the appropriate direction). This extends to the game's approach to objective markers in that you are, a lot of the time, fending for yourself. You are given a bit of convenience when it makes sense, but never did I feel like I was being handheld through my experience.

Skyward Sword, this is not. Thank Christ. 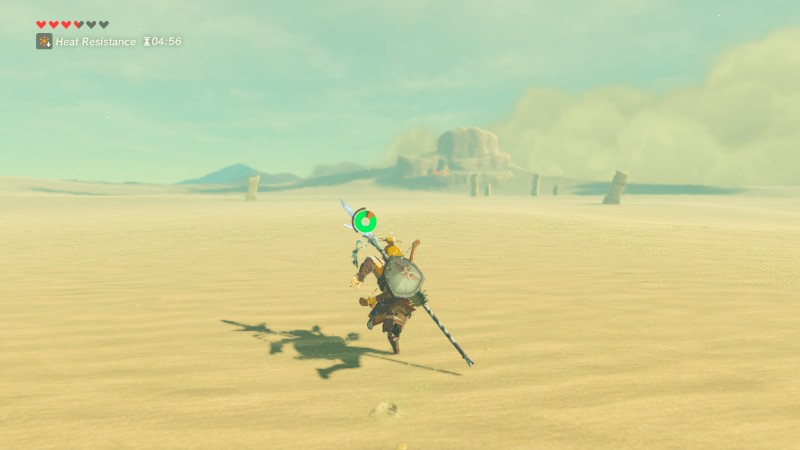 Example: Gerudo Town. You can't get in looking as Link does naturally. Which, according to the Gerudo natives, is too manly. I'd disagree, but hey. They know he's a dude somehow. So, what do you do? Rely on your objective marker to point you in the right direction? Nope! You have to put in the effort to chat with the right NPC's (I must stress that this has not been too heavy a task thus far, only welcomed and respectable to my intelligence) and then apply the information you gather to finding where you need to go.

By the way, where you need to go leads you into some fantastic scenarios. 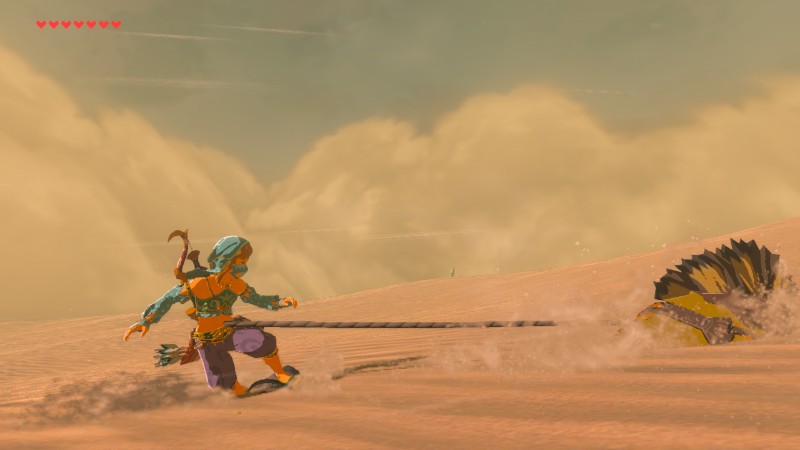 I desperately want a pet Sand Seal... and a pet Gerudo Link

A lot of this has become very un-Nintendo these past couple generations and I can't adore how well they've accomplished bringing back some challenge to their games any more than I do right now. 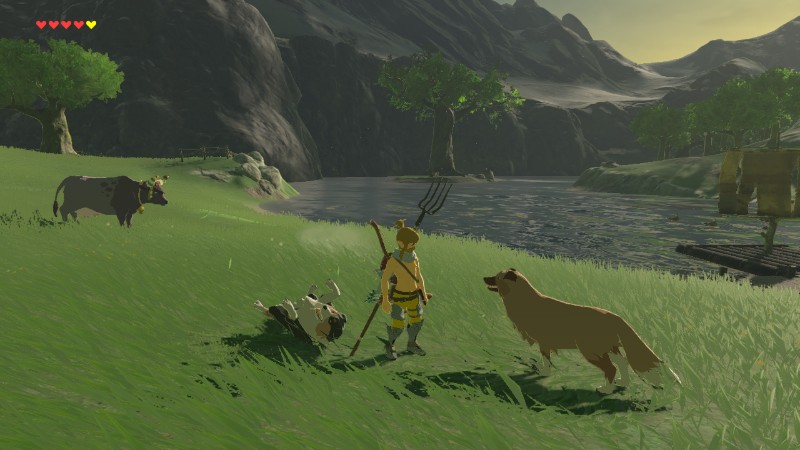 I love interacting with the puppers 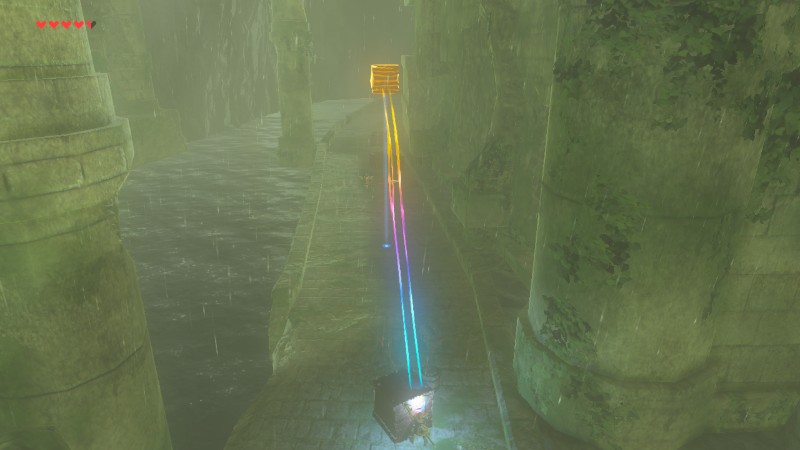 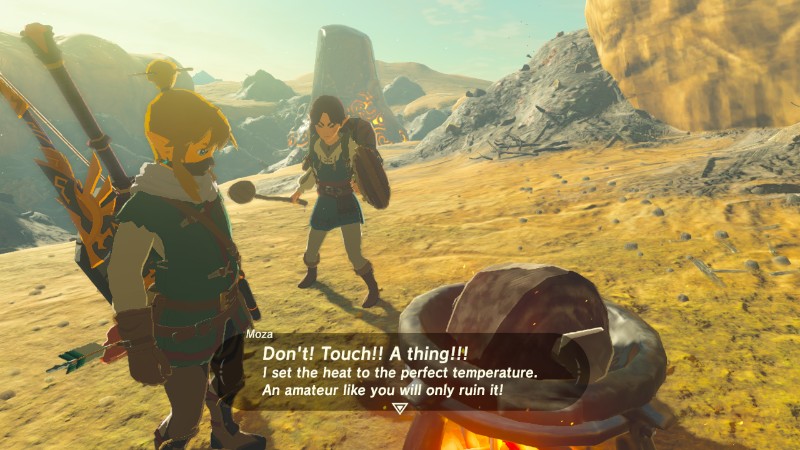 Of course, the game still has its share of zany characters 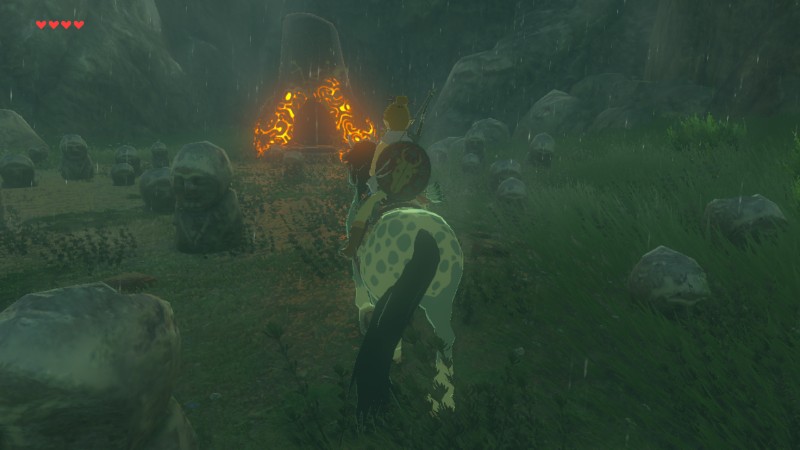 I hope to continue finding uses for my horse, Laura, because she is very pretty and is my friend

My grievances? There are some inconsistencies with headshots and with what Link can use as a foothold whilst climbing, I haven't been impressed with the music as I have been with other Zelda's (although, there are still standouts and it's generally quality), and I've had the game crash once. Though, most egregious is the storytelling.

Coming off of previous console entries, the narrative is disappointingly inoffensive. I'm keen on the concept of the Guardians as it has allowed Nintendo to branch out into some really cool territory, but all else besides the actually not too bad voice acting or some of the direction during key cutscenes has failed to grab me in the way that Midna's arc in Twilight Princess or the relationship between Link and Zelda in Skyward Sword did. This may change as I continue, but I'm not holding my breath (of the wild). Doesn't really help that Ganon is the antagonist again. Yes, I get Ganon's a big deal and that he's a huge part of the franchise's legacy. But, Nintendo can do and most definitely has done more than just Ganon.

Don't you tell me that Zelda has never ever been about the story. This isn't Mario or Star Fox where legacy is practically all those narratives have going for them. Zelda has sported solid pacing, characterization, and storytelling in the past and we shouldn't just ignore that because we've come to only expect so much from Nintendo's other IP's.

Basically, unless you can sport a Ganon as rad as Wind Waker's, don't even bother anymore with him. He's taking up space that is more well-deserved for the Zants or Ghirahims of the world. 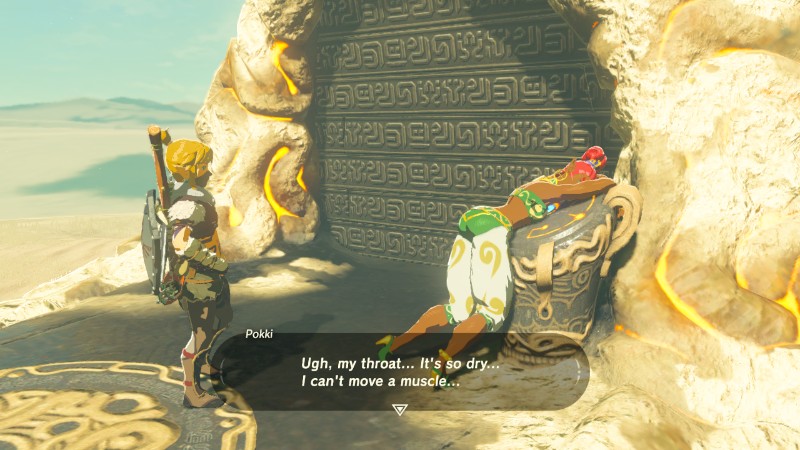 With that said, every aspect of this ludicrously-sized title is worth taking part in. From the crafting to many of the game's tiny confined spaces of combat or exploration. For the kind of game Breath of the Wild set out to be, it is, in my opinion, incredibly well-balanced.

In just these first several regions, I feel like I have gone through a whole Zelda game's worth of content with all of it just as good as you'd expect and all of it my own personal story. Setting a course, doing what I want, saving the world. Truly, I believe, The Legend of Zelda has reached its pinnacle.