Fire Emblem. One of the most puzzling Nintendo franchises for sure. Most people's first experience with the series was Super Smash Brothers Melee on the Gamecube, which included Marth and Roy. Neither of their games were released outside of Japan, so they were just cool and mysterious swordsmen to everyone. Indeed, the first worldwide release of a Fire Emblem title was Fire Emblem: Blazing Sword on the Game Boy Advance, two whole years after Melee! Since that time, however, every entry except one has been localized and published worldwide.

Interest in the series has been on the rise, lately. The two best selling entries are the recent Fire Emblem Awakening and Fire Emblem Fates, both on 3DS, and the recent Fire Emblem Heroes on mobile has also been successful. A remake of the second game in the series is on the way, a new entry is being developped for Nintendo's new handheld, and a Fire Emblem musou is also worked on for both Nintendo Switch and 3DS. There's no denying that the franchise has come far since the mysterious Smash Bros swordsmen days.

Despite this, it's still far from being the most popular Nintendo franchise, nor the easiest to get into. So I figured I'd start writing a couple blogs about Fire Emblem, what the series means to me, what the games are like, and my recommended titles if you want to give them a go. Hopefully you'll stick around! There's plenty of evil empires to vanquish and bandits to massacre ahead of you.

How do I play?

Fire Emblem is a turn-based strategy role-playing game (SRPG for short) series which sets itself apart with permanent death, random level ups and dedicated battle screens which usually show very pretty combat animations. On your turn, you're able to move every unit you control once, and then the enemy can do the same on their turn. This makes your turns particularly lengthy and strategic, and enemy turns long and stressful. An unlucky critical hit forcing you to lose a unit forever is never too far away.

Weapon accuracy and damage is affected by what is known as the weapon triangle, introduced in the fourth game in the series. It is super arbitrary, but helps every kind of unit shine against a specific kind of enemy. Swords are better against axes, axes win against lances, lances have the edge over swords... Of course, since most main characters in the series are too cool for school sword users, early enemies tend to be axe users with terrible accuracy. Outside of the weapon triangle, axes tend to be more powerful but less accurate, lances are average all around, and swords deal less damage but are very accurate. On top of this weapon triangle, there also exist other weapons like:

Since there's a good use for every weapon, it's generally a good idea to balance your units to include every kind. Archers do tend to be the weakest units overall, though, so don't go around training ten of them at once.

As mentionned earlier, units are gone forever once they die (with exceptions), so you must be very careful not to overextend. You do tend to get a lot more units than you'll ever use in these games, but it always sucks when you get very attached to a unit and they end up biting the dust.  You can recruit some units from the enemy's side by fulfilling some conditions like talking to them with a certain unit, or finishing a chapter without killing them... So be on the lookout for enemy units with non-generic portraits.

To conclude this little gameplay overview, let's talk about classes. There are typically three tiers of classes in Fire Emblem. Most characters start out as base classes, which can reach a maximum of 20 levels. Starting from level 10, these base classes can evolve to promoted forms. This comes with a healthy stat boost, a raise of each statistic's cap and often the ability to wield an additional weapon type. Some units start as Trainees, that can evolve into base classes. They start off very weak but if you have the determination to grind them all the way, they can end up reaching all of the statistic caps.

I, too, was introduced to the series through Smash Bros, but I started playing relatively early. My first experience with the series was the first localized entry, Blazing Sword. I think it's the permadeath that made this so special to me. I played a couple SRPGs in my day, like Final Fantasy Tactics and Disgaea, but they were both fairly easy titles where losing a character due to a misplay was mostly a slap on the wrist. Here I really wanted all my units to succeed and live to say another day. Which made me care for every character and their struggle all that more. 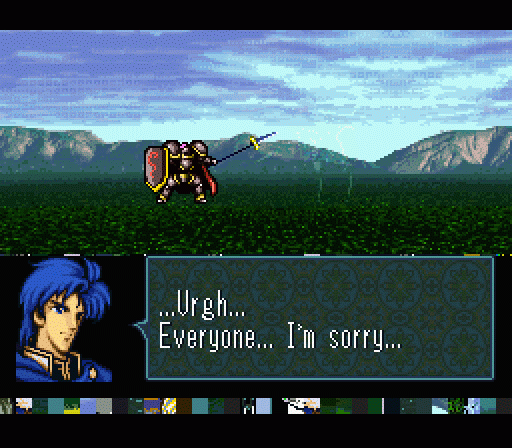 I didn't know English all that well at the time, so bits and pieces escaped me. I didn't understand what "Press B to yield" meant while grinding experience points in the arena, so I always ended up fighting until my character died. Such preventable tragedy! The hubris!

The art style also grabbed me instantly. The artwork was nice and colorful, but the sprites were the real winners here. The animations for attacks were all excellent, especially for the critical hits. And the enemy dragons were oh so menacing! I still like the GBA artstyle the most out of all Fire Emblem games. 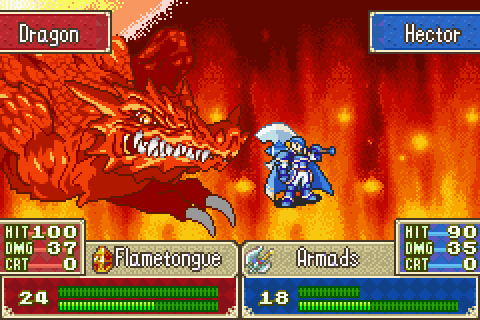 I have to thank my high school friend for making me fall in love with the series, too. He'd give me advice on how to clear maps when he visited my place, and he'd write lengthy guides for GameFAQ. Those were the days! While me and my friends don't have this kind of dedication to these games anymore, I still find myself replaying some of my favorite entries all the time. Many of my friends still play the series to this day, so the magic isn't lost! There's something really satisfying when playing these games at the same time as a friend, being able to compare strategies and which character you're using in your team. It's something kind of similar to Pokémon, in a way!

Next time, I'll give you my personal recommended games to get into this series, as well as some hot tips to help clear challenging maps. For now, though, I'll keep playing through Fire Emblem: New Mystery of the Hair! 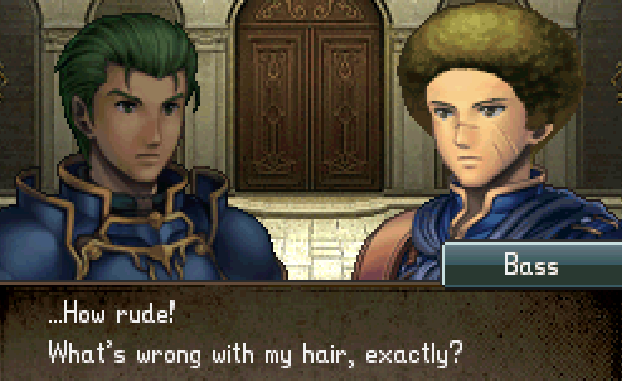