Hello, boys and girls, and welcome to yet another Flash Games Friday! Nothing special, really, just three random flash games summed up in mini-reviews for your meager interest. I can't even guarantee that these are good games. They just kinda catch my eye and I go over them, for better or for worse, and hopefully someone enjoys them either as much as I do or more. Whelp, without further ado, here are your flash games! 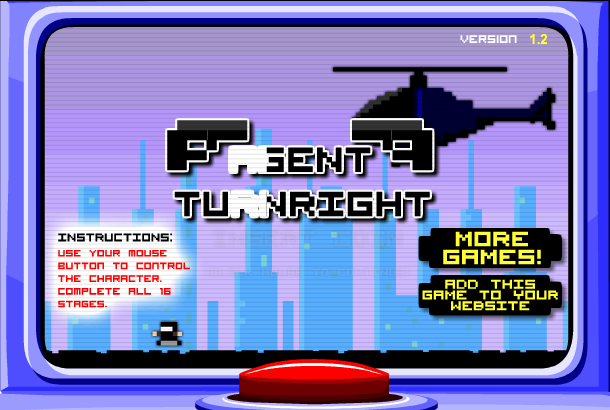 Agent Turnright is a game of mini games, similar in style to that of Dumb Ways to Die. The whole point of the game is to get through the variety of mini games using only one button. Simple enough, right? There are a few different types of mini games, each repeating with harder difficulties. The best part is that they're all secret agent themed, so the mini games are things like racing through traffic, jumping from train car to train car, or shooting down a helicopter. They're usually pretty quick and the game likes to rush to the next one, but each is pretty memorable in their own right despite some being almost blatant clones of others.

The aesthetics are 100% fitting for what the developers were going for. The old, arcade style graphics complement the single-button gameplay quite well, and the music? Oh boy. The music is the most stereotypical suspense music you'd find for a spy film, and yet it works so damn well. It's fairly repetitive, but that's okay considering how much of an ear worm it is to begin with!

It's a short but sweet game, being only 15 levels long. It's a decent challenge your first time through, so unless you're just a natural savant you won't be breezing through it. Agent Turnright is a prime example of a game practically made for Flash Game Friday. It's a fun play and has got plenty to it, yet it's still not enough for a full review. 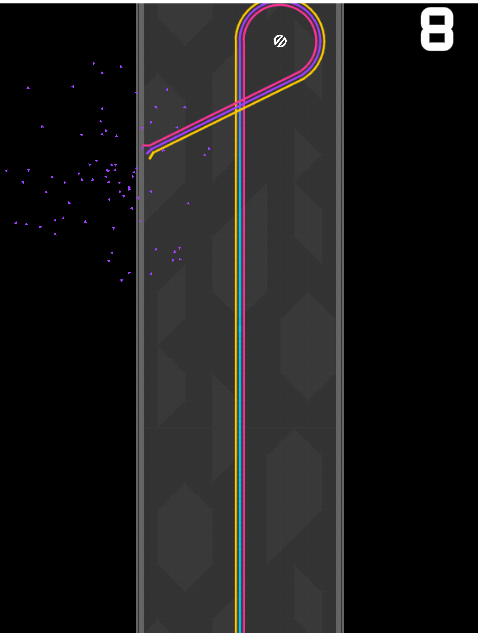 One More Line is another single-button game, but instead of being a series of different mini games it's just one. Does that make it any less entertaining? Not by a long shot. The sole objective of this game is, simply put, to get as far as you can. What makes it hard? Both the walls and the circles littered between them kill you, and the only way to change your trajectory is to choose a circle within your range to temporarily orbit around until you can release at a better angle. Sounds easy enough, but it can be quite the challenge.

The mechanics of this game are simple, yet at the same time very well implemented. For example, when you're orbiting a circle you're able to pass through walls. This is great, due to both the wide orbits and the camera moving with the little player character thing. It's all so addicting, jumping from one orbit to the next, circling around in safety in between jumps of peril.

The music is a pretty nifty house music mix, with sound effects that reminded me of Ultraflow. The Daft Punk-esque voice saying the titular phrase "One More Line" is also a nice touch. The minimalistic, geometric style of the visuals works perfectly, and also has all sorts of nice little touches. The line that makes a trail behind you is mesmerizing, and the way it changes colors as you orbit around different colored circles makes for a vibrant line at the end.

Really, everything about this game is spot on. Nothing it does seems poorly done or half-assed, and that's a wonderful thing to see. This is actually a mobile game a well, so feel free to check that out as well!

Remember when I said that I can't guarantee that all of these games are particularly good? Yeah, well this is why. I'm not so much going over this game to say that it's boring or sucks or anything, but I'm going over it more so that someone else might pick it up and enjoy it more than me, and maybe (hopefully) get me to enjoy it more.

Canonical is a weird little game. It's a sort of slice of life where you live the life of some lady during the few days before new years. You follow a simple routine that consists of getting out of bed, getting dressed, going down three flights of stairs, checking the mail before you're finally out of your apartment, walking across the cold outdoors, buying some Christmas decorations (after Christmas has already passed), taking the bus to work, fast forwarding through work, taking the bus home, walking across the cold until you get home and finally sleep. Rinse and repeat, crossing off another day of the calendar until you finally get down to new years. Then the screen goes black and I couldn't figure out what to do from then on.

But seriously, the game is severely lacking in mechanics, which is why I'm inclined to believe it's one of those narrative focused games where all you do is trot around, absorbing the world as you go. The game doesn't do too terrible there. The best part of the game is walking from your apartment to the bus stop, watching all the people enjoy their lives, playing in the snow. Who's outside and what they're doing changes as the days do, and it makes the world feel alive around you. I say around you because you can't interact with anyone, and kinda end up just looking at them as you pass by. Awfully similar to real life, yeah?

The aesthetics are half good, half bland. The music is nonexistent, the sound effects okay. The visuals are interesting and sets the tone completely, whether the tone needs to be vibrant and alive in the day, or dark and eerie during the night.

Anyways, there's your flash game's this Friday! Sorry for the hiatus the series took a little earlier than I had planned. Life had gotten the best of me, drowning me in the struggles of society and schooling. That's the major hurdle when it comes to me and writing. Well, that and the fact that these always explode into more paragraphs than I had intended and suddenly this entry is 1074 words long.