A little late to the party, but I finally got around to playing Another Metroid 2 Remake.

I had known about AM2R long before it gained widespread notoriety upon its release, but didn't get around to it because it was cease and desisted before the dev could make a Mac version.

Thankfully, someone online made a quick-and-dirty Wineskin port, so I just finished it now.

And oh my God this is the Metroid game we've been missing all this time. 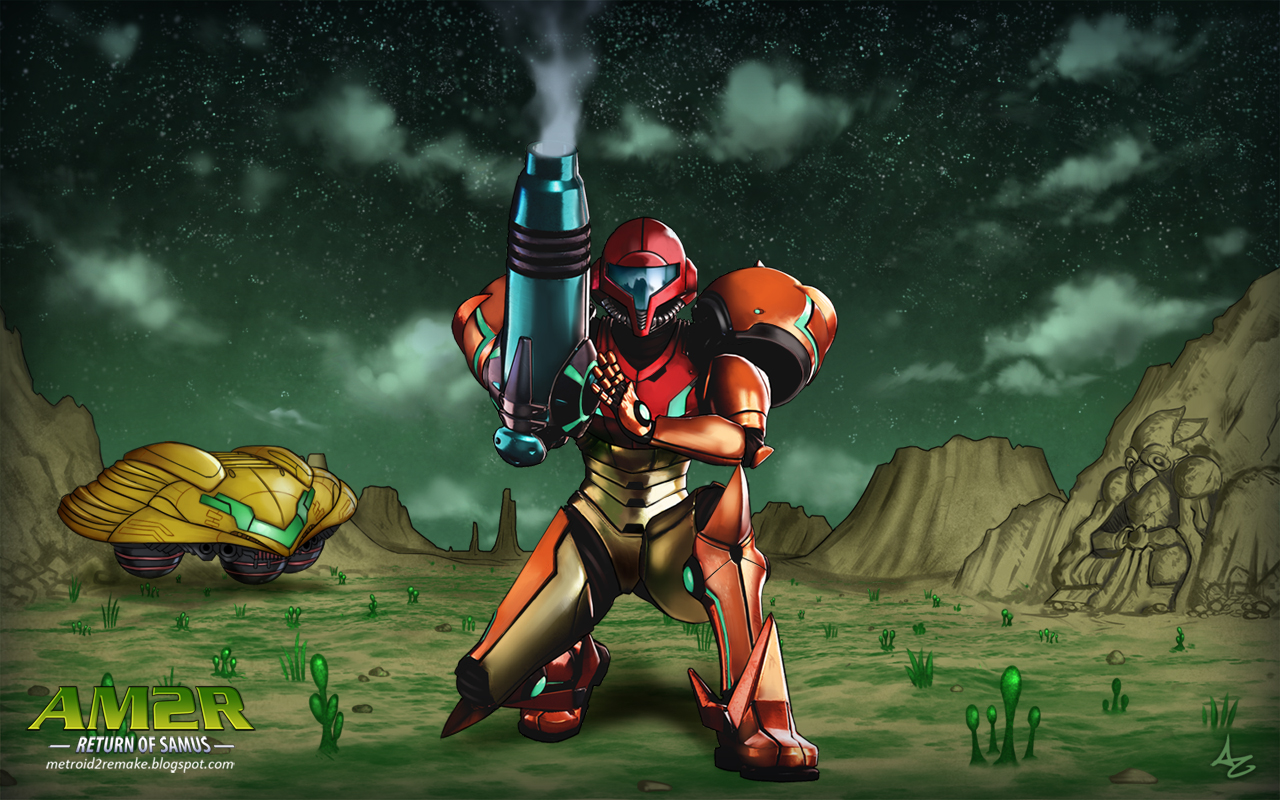 The original Metroid 2: Return of Samus was released in 1991 for the original Gameboy. The game had a lot of noticeable improvements over the first game, and while it was completely overshadowed when Super Metroid was released on the SNES, I do think the original Metroid 2 is somewhat of an underrated classic. You do have to deal with a few annoyances, like grinding for health and ammo every once and while, but overall it's a pretty solid GB game.

But forget that even exists because AM2R blows it out of the water.

I get why Nintendo legally can't buy this guy's game, slap $20 on it and put it on the e-shop, but they probably should. AM2R needs to be immortalized as the definitive edition of Metroid 2, and Nintendo's attempts at shutting this game down are a travesty. I know they had to C&D this game because it infringes on their intellectual property rights, but there's another reason why they had to put this puppy down.

This game makes them look terrible.

But let's back up and talk about the game. AM2R follows Samus as she traverses the caverns of SR388, the Metroid's homeworld, as she attempts to scrub the galaxy clean of the Metroid species once and for all (spoilers, it doesn't work).

Metroid 2, along with its remake, are all about descent. You're constantly falling down ledges and manouevering down tight corridors. The game's atmosphere is clausterphobic, and as you descend deeper the rays of light from the surface become ever rarer. 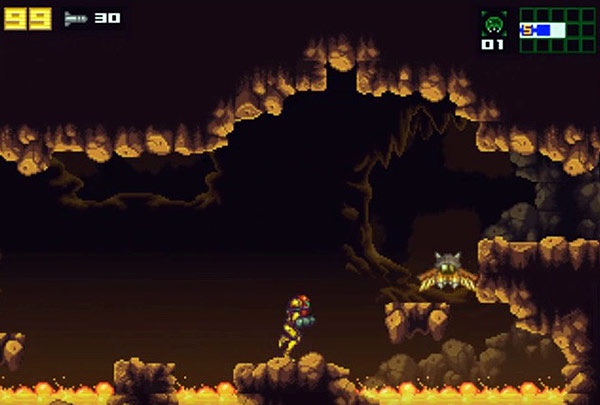 So what does AM2R add? Well, a butt ton.

Metroid 2 made a lot of substantial contributions for the series. It allowed Samus to aim up and down, it started her out with a beam that extended the entire screen and introduced her iconic Varia suit. It also made a bunch of small alterations to the level design that made the game easier and more enjoyable to navigate. Metroid 2 suffered in that it lacked any colour, and with all backgrounds being black it became very hard to distinguish where you were. Since landmarks were basically nonexistant, getting lost was a constant problem.

So AM2R basically adds the gameplay mechanics from Super Metroid, Fusion and Zero Mission and makes the map much more interwoven and detailed. Samus can aim diagonally and can hang from ledges. A neat little addition is that if there's a tiny dip in the floor in front of you, instead of jumping Samus will do a little vault that saves time. Upgrades that were missing from Metroid 2 have retroactively been added back in, such as the Gravity Suit or Shinespark.

But AM2R retains a lot of the original's level design. Metroid 2 features five areas with large temples surrounded by caves. The level design favoured big verticle and horizontal shafts, since that was easier for the Gameboy's smaller screen. AM2R keeps that level design, while adding more variety and depth to areas.

Now newer levels connect to older ones, and retracing your steps with new items can yield valuable upgrades. In hindsight, Metroid 2's map didn't encourage a lot of backtracking. Once you were done with a level, you pretty much never went back. AM2R makes the map a lot more interesting and encourages players to re-explore old areas.

AM2R adds new levels not in the original that take advantage of equipment not seen in the original game. Furthermore, upon backtracking to an older area to try out my power bombs, I discovered a big side-level that was not in the original at all, that had its own boss too. For a fan remake, this game contains so much content, players will be hunting secrets in it for months. 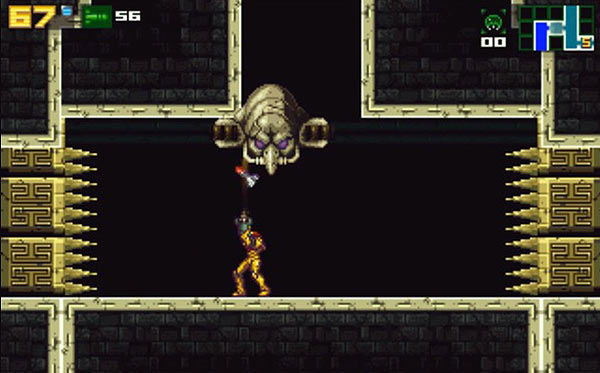 This game also contains bosses, which is a new addition. The original had you battling Metroids, but aside from the final battle with the queen, there was a conspicuous absence of any boss fights. AM2R fixes that by providing several completely new bosses. Recycling bosses is nothing new for Metroid or Nintendo games in general, so it's nice to see all of the bosses in this game be completely original. All of them mesh well with the game's mechanics, though at least one or two will test your dexterity.

AM2R isn't a ridiculously hard game, but it will test your abilities. At least one boss had me space jumping (it's like double-jumping except as many times as you like) around a boss, firing missiles to destroy its armour before using my beam to take out its core. There ledges around the arena collapse after a few seconds, and the boss rarely comes near the floor, so you need to be mashing the jump button while firing missiles in the boss' direction. It's challenging, and sometimes the game pushes you into a difficult boss battle without warning.

Thankfully though there are numerous save points, which recover all your health and missiles. Also, since boss rooms can be safely ignored, there's no problem with leaving a boss until you've strengthened Samus up so she has a better chance at winning.

I also enjoyed how you don't need every upgrade to beat the game. Each area is considered finished when you've slain every Metroid on that level. As long as the Metroids are dead, and you have the required equipment to proceed deeper into the caves, you're good to go. But sticking around can yield some important upgrades that expand the map and add so much more to the game. As far as I can tell, the gravity jump, shinespark, Varia suit, power bomb and numerous beams are all optional. You will need either the power bomb or the screw attack, but as long as you have at least one you can beat the game.

I do have a few frustrations to vent, but they're all relatively minor. Some of the Metroid battles can get pretty tedious, especially when they annoyingly dodge all your attacks or get stuck on level geometry. Also there's an enemy type that explodes when attacked, and the explosion effect stays on screen for far too long. Also, the wall jump isn't required to beat the game, but in at least one scenario I was forced to use it to escape an area I was trapped in. If a player didn't know they could wall jump, I could reasonably forsee them getting stuck.

But aside from that, I had such a fun time with AM2R. I can consider this the unnofficially official version of Metroid 2, and will probably give this one another replay soon.

And man, Nintendo really screwed the pooch on this one. Nintendo's been cracking down in recent years on fans using their properties in unnapproved ways, hence their horrible treatment of Youtubers. But to kill a fan project that had been around for years, and was only released for a few days before being shut down is tasteless. It stings so much so because this game is phenominal. Considering the Metroid IP has been dormant since Other M (I don't count Federation Force, despite not having anything against it, unlike many), it's embarassing that a fan put so much love and passion into this game, and made such an amazing game.

AM2R exists, and will continue to exist. Go out and download it right now, if you haven't already. Nintendo's concerns over their IP are creating a toxic environment for their fans, and their efforts come across as rather pointless, since AM2R is readily available online anyway.

This remake is a key example why fan communities should continue to exist, and why fan projects are important. Retro Studios has already acknowledged AM2R and said they were tempted to do their own Metroid 2 remake. Maybe soon, because of projects like this one, we'll see a new Metroid game in the future.