Hey, hey, hey, and welcome to another Flash Game Friday! I've been struggling to find time for this one, but I think that this should be a somewhat consistent series, unlike all my other ones. What can I say? My availability for writing is short but do you know what's even shorter? That's right! Flash games! 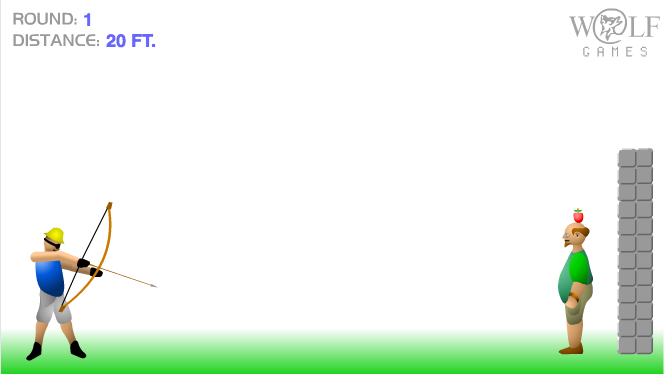 Apple Shooter is an oldie. Like many flash titles of its time, it is mostly a little experimental experience for the developer than a serious try at creating an impressive experience. The goal is simple: shoot the apple off the man's head. Every time you succeed, you move five feet back and try again. Miss and hit the wall? That's cool, man, just give it another shot. Miss and hit the guy? See you back at the first distance!

But you see, that's not the only thing about messing up and hitting the guy. Apple Shooter is not only one of the flash games to dabble in a little bit of physics experimentation, but it is also one of the flash games to include gore. It's mostly just blood, but what really hammers it home is how it differs depending on where you hit the poor guy. Hit him in the head just right, and now his head's staked to the wall. Shoot him in the leg, and now he's trying to crawl toward you with his dying breaths. It's some freaky stuff, set with stock groan sounds that still sell it decently well.

Mechanically it is fun, and a decent challenge as well. Shooting takes a careful eye, and it gets increasingly intense as the distance grows. It's a game of highscores, with no real ending and ever-growing bragging rights. Aesthetically the game is a tad flat, having very bland visuals akin to that of Happy Wheels, and the music nonexistent past the opening credits. Aside from that though? Interesting title for the little time it takes to pick up. 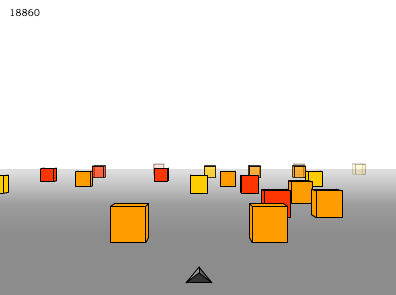 This was another fun game to challenge friends to in grade school. Cubefield is pure skill and endurance. Probably the first endless runner I ever played, this game is considerably good for what it was. It was a simple two-button game of moving left and right, avoiding the infinite onslaught of randomized cubes while watching the number of how many you've passed skyrocket. 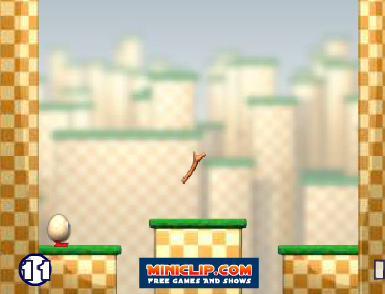 Egg Run was a surprise for me. I found it out of the blue within the time of me writing this, and has thoroughly impressed me. The entire game is about you using the mouse to sling around you little egg character, with the goal being to get the stick and go the the level's end point. You have three courses according to difficulty: the basic green course, the icy winter course, and the floaty space course. How is this all thematically coherent? It's not, but that's alright.

Flinging around the egg around is honestly lots of fun. Playing the the physics may be a tad difficult at times, but overall it feels fair and satisfying. The single-screen levels are cleverly designed just enough for them not to all feel the same, despite none of them really standing out. The different courses do play slightly differently, with the ice levels involving slippery terrain, and the space ones having a very floaty version of the regular physics. Honestly pretty fun, if I'm being real.

Aesthetically, this game isn't half bad. The music is a bit on the repetitive side, but is jovial, fitting, and fun. Visually the game has a style that I can't describe but I absolutely love. Something about this style makes me go nuts when done right, and I have a weird spot for it. Decent color palette and good animations, too.

For a second I figured I could just write a whole review on this game, and maybe I will one day, but for now I just want to save the best for last and share a legitimately fun game that isn't just a little flash experiment!

And there you have it: three mini-reviews of three flash games, all for your reading and playing pleasure. I hope you enjoyed my finds, and hopefully I find more time for finding even better ones!