Wow, I have no idea how to start this.

I guess that works.

Recently, I discovered the lovely community over in the Community Blogs and Quickposts and decided to try to be one of the cool kids. Writing about video games sounds fun so I thought I'd try my hand. I actually wanted to dive straight into C-Blogging, but some people had the better idea of introducing myself first before you all grow to hate me. So, this one's for you wesliketacos and ZombZ. Thanks for telling me to do this.

I really want to prevent this from becoming too autobiography-like and more focused on my love for video games. Forgive me if I stray (spoiler: it happens). This is the first blog of any kind that I've written, so please be gentle.

Act I: The Rage

Honestly, I can't remember the first video game I ever played, it was either Super Mario Bros. (so cliché, I know) or Maniac Mansion for the NES. Both classics, I have nothing but fond memories for them, but I didn't love them. I didn't want to learn more about them, I didn't want to become better at them. This feeling would continue for pretty much every game I played until a very specific game came along and kicked my ass and rubbed my face in my sad, sorrowful tears. That very specific game was Street Fighter II for the SNES.

I also came to learn that those weren't sad, sorrowful tears at all. Those were tears of rage. 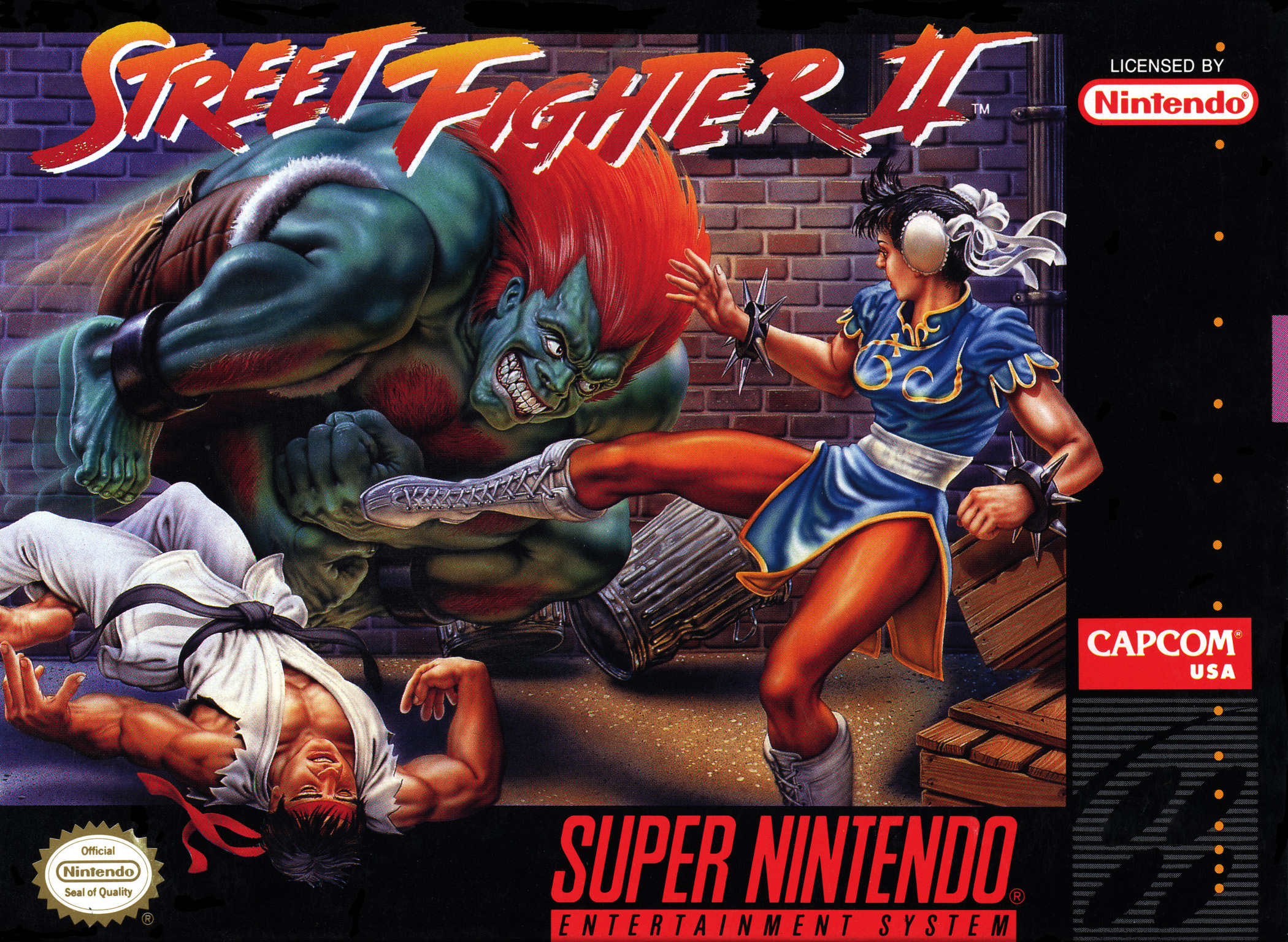 I still don't know what the hell's going on here. Like, why is Ryu just chillin' while Green Beast Man is using Sonic's Spin Attack on a lost Chinese Girl in an alley?

I believe I was five years old when I started playing SFII, the game released in 1992 but we got it late in 1994. I always picked Ryu, I just thought he was the coolest character I'd ever seen (he's still my main today). Button mashing your way through the CPU opponents only gets you so far. I remember seeing the CPU perform special moves like Guile's Flash Kick and Ryu's Hadoken, but I thought it was random. I didn't know you could input a sequence on the controller to do these moves yourself. I mean, every time I did a special move I just thought I had to mash harder to do it. I lost my shit every time I accidentally pulled off a Shoryuken. That was the move for me.

I never beat the game as a child, M. Bison at the end made sure of that. That's if I even got lucky enough to make it that far, because Guile is an asshole. "Sonic boom, sonic boom, SONIC BOOM," and if you managed to get past his obstacle course he had a Flashkick charged and ready to unload on your bitch ass. I found myself becoming angry. I've been frustrated at games before, but never angry. What made it so much worse is the 'Continue?' screen, seeing Ryu battered and Guile's smug face crushed me. Imagine being five years old, trying your hardest and failing against Guile, only for him to tell you to "GO HOME AND BE A FAMILY MAN!"

What a dick, right? 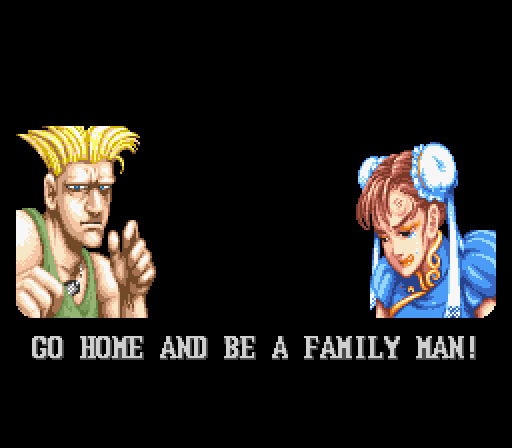 One day, my older brother -- who you'll find out is responsible for my early gaming moments -- got a second controller and plugged it into our SNES. We fought in VS. mode and he picked Guile and started throwing Sonic Booms.

He started doing special moves at will. All the Sonic Booms, all the Flash Kicks, all the Hadokens......even the Shoryukens. He knew I always wanted to do a Shoryuken so he spammed it until I died. I begged and pleaded him to tell me how to do it but he never told me. So, I threw the controller to the floor and yelled "MOTHERFUCKER!"

That was the first time I raged. I just wanted to learn how to do these moves and get better so I could beat Guile's ass, wreck M. Bison, and destroy my brother. 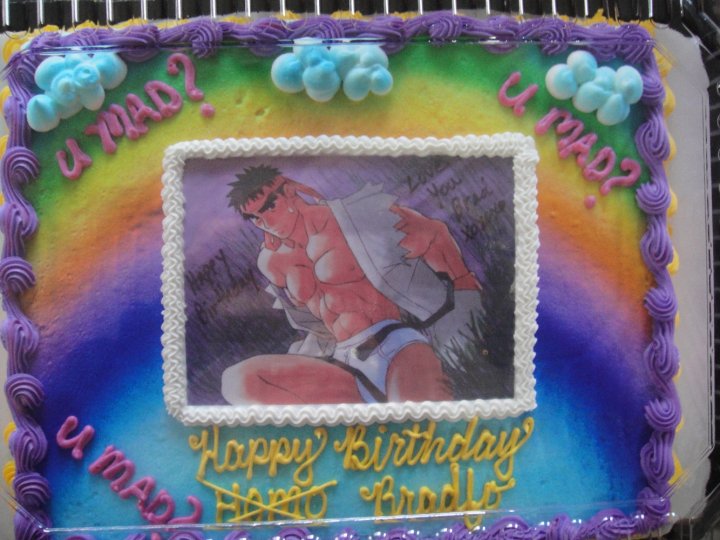 That would all happen over time. Street Fighter II would become one of my life's defining games, the desire to learn more and git gud started there.

Fast forward four years to 1998 and we're at my life's other defining game. We moved to Okinawa -- my father served in the US Navy for 30+ years so we moved a lot -- and we're living on Kadena Air Force Base. My family owns a PlayStation but my parents hardly ever bought any games. They were one of those "you only get a few games every year, so make them count," parents.

I played any game I could get my hands on, not being able to differentiate between a 'good' or 'bad' game. You know, the days when we were all kids and played for fun before we grew up and became jaded, cynical assholes. Anyway, my 9th birthday was coming up, so my father asked what I wanted. Obviously, I said I wanted a video game.

But now the problem is: what game?

We used to get GamePro every month back then. Damn, I miss that magazine. A lot of kids use 'ProTip' these days not even knowing where it originated from. I remember reading about a game that looked amazing. Everything from the screenshots had exactly what my eight-year old mind was looking for: cool looking characters, an awesome title, and even badass box art.

That game was Skullmonkeys. Just look at how cool that shit looks. 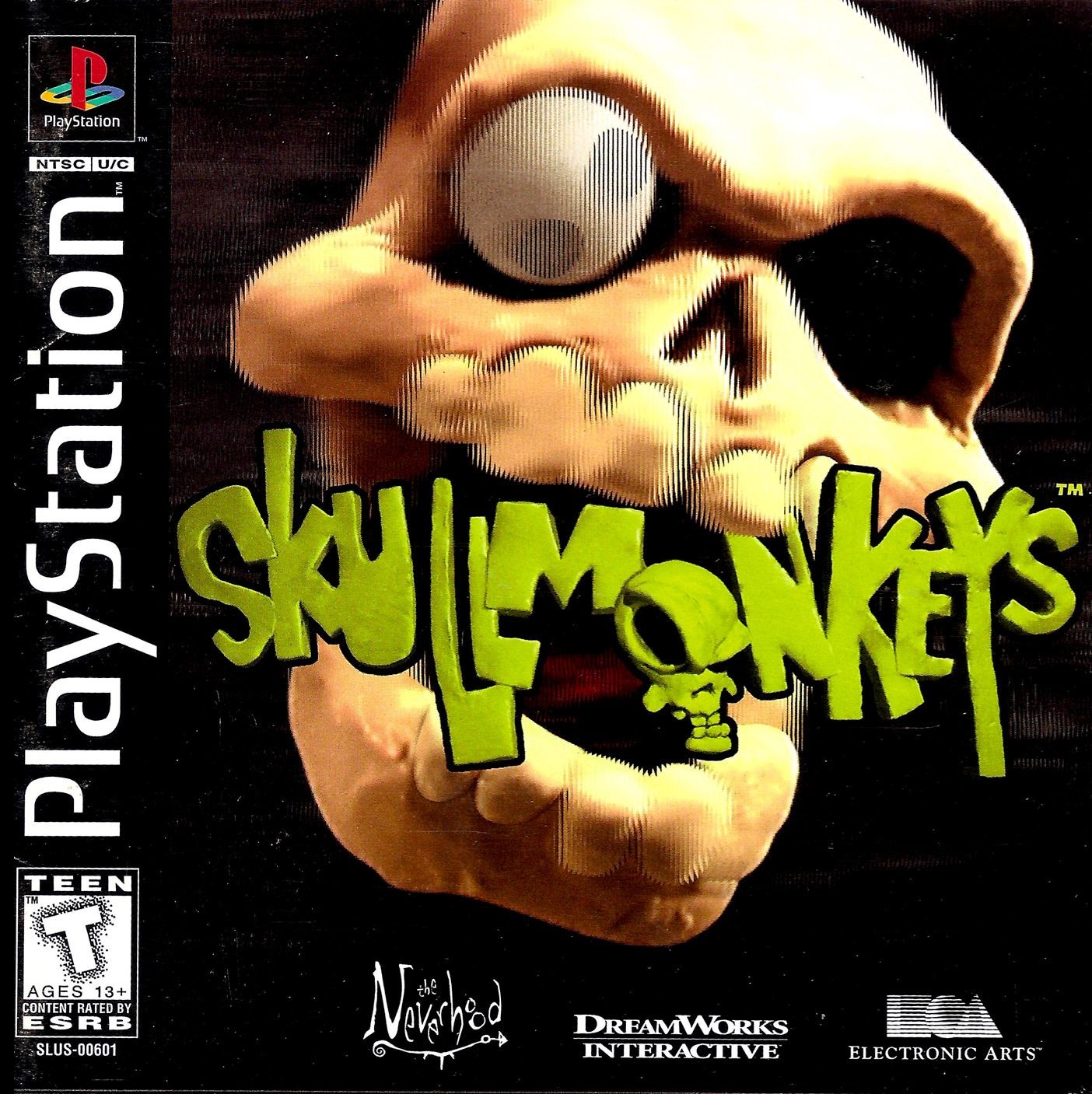 My mind was set, I want Skullmonkeys for my birthday. My father grabbed his keys and told me to get ready to go. I was getting ready to leave as my brother approached me. He knew what was going on and asked me what game I was getting, so I happily told him Skullmonkeys. He was less than enthused, and tried to convince me otherwise. He continued to tell me about a game that he's heard a lot about, and all his friends are talking about it. He was hyping it up like it was the greatest game ever made. It was called Final Fantasy VII.

Meh. Sounds stupid, I thought. I wasn't going to have any of it. I want my Skullmonkeys, damn it. It just sounds so much cooler than Final Fantasy VII. Determined, I left with my father to the BX (a store on base).

We arrived at the store and I went straight to the video game section. I found Skullmonkeys and picked it up with the force of a thousand exploding suns. As I was reading the back of the case, I recalled my brother telling me about that other game. I searched for it, but it took me a while to finally find it. That box art doesn't pop out at all, especially compared to the glorious Skullmonkeys box art. I picked it up and looked at the back of the case.

"...quite possibly the greatest game ever made." - GameFan Magazine. The first thing you see. "An epic adventure across 3 cd-roms." Holy shit, I didn't even know games could be on more than one disc. "Towers over the competition in terms of graphics, sounds, story, and playability." - GamePro Magazine. Um, WHAT. Plus seeing those two lions and the cool looking monster just took it over the top. How the hell was I NOT supposed to get this game?! 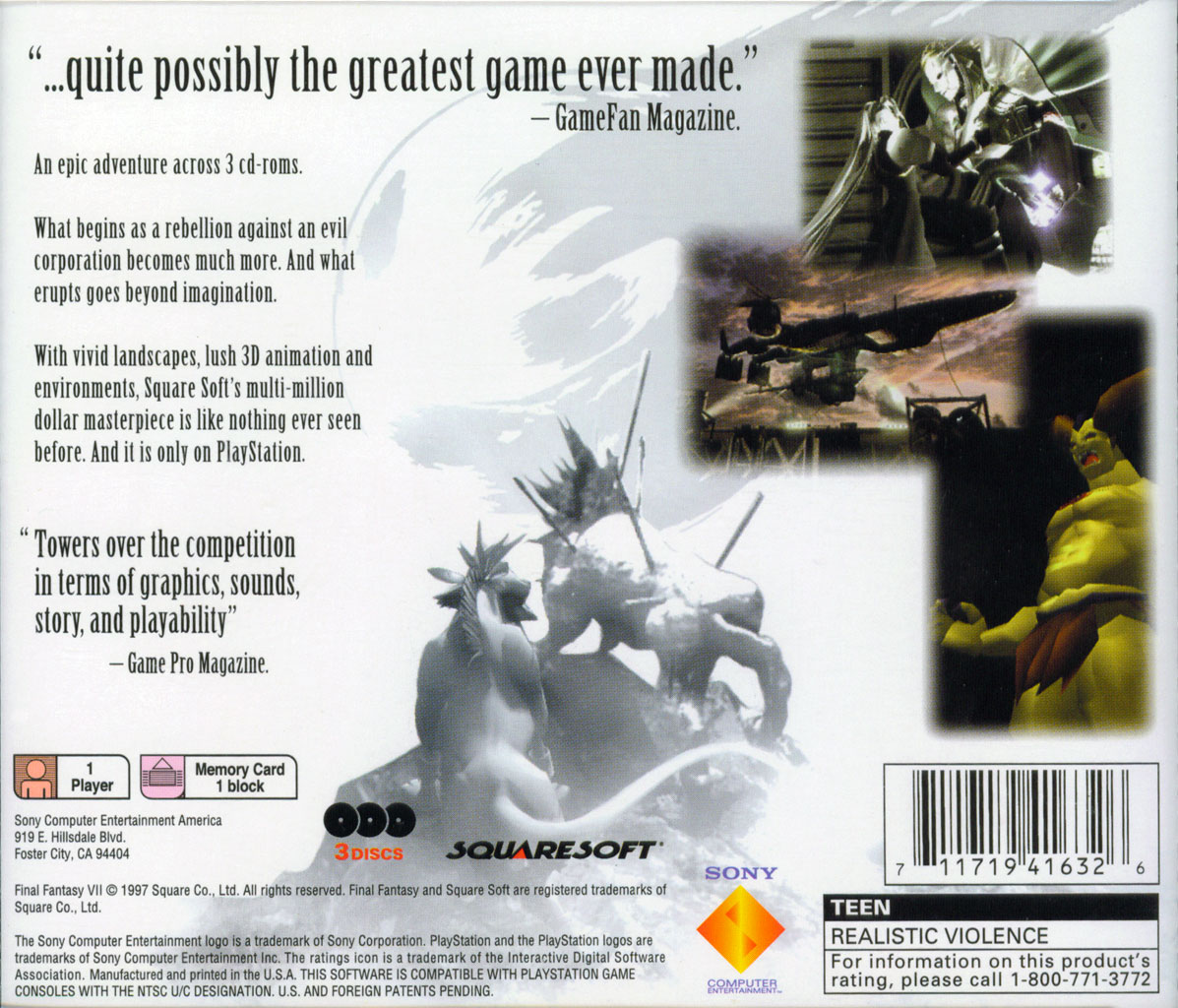 ...so, I think they're trying to say that it's good

My mind changed, I handed it to my father. He bought it and we headed home. On the drive home, I tore open the shrink wrap and looked through its thick as hell instruction manual -- I miss those so much, we took those for granted -- and just got more excited to play the game.

Act III - The Struggle & The Joy

I remember being blown away by everything that Final Fantasy VII had to offer. I was too young to fully comprehend it's story, but I still felt a strong connection to all the characters. I never played an RPG, but it's mechanics were easy to grasp. The music was memorable, it was great visually, and it was just fun as shit.

I was in love.

Unfortunately, my brother was in love with it also. We also only had one memory card; all of its blocks were taken by saves of all his games. Which meant I wasn't allowed to save. At first, I didn't even care. I raced home every day after school to boot up FFVII and see how far I could get before my brother got home and wanted to play. Each day I got further: Wall market, Honey Bee Inn, Shinra HQ, Kalm. I was just having so much fun experiencing it over and over again.

But that fun soon transformed into curiosity. What the hell are on disc 2 and 3? I never got far enough in a single sitting to find out. I needed to know. Eventually, that curiosity transformed into frustration. Frustrated because I couldn't save and the only way to see the rest of the game was to watch my brother play. Before I even knew what a 'spoiler' was, I didn't want to know about anything further in the game before I got to experience it myself. But I just HAVE to know how Cloud's story ends. 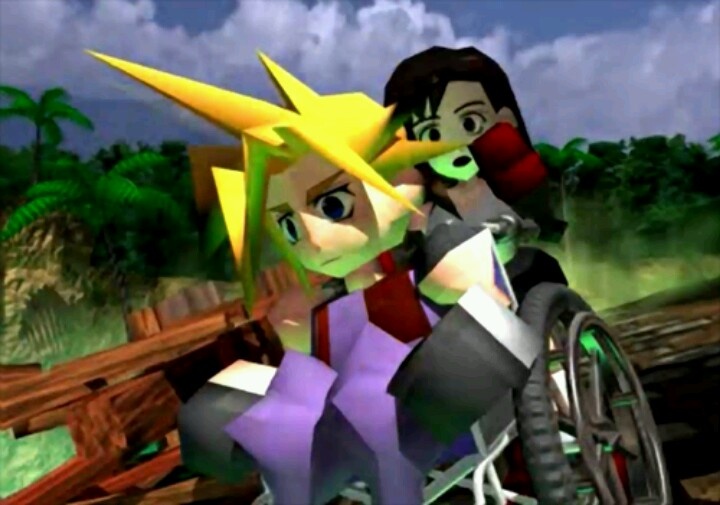 Will Cloud ever walk again? I had to know

I started watching and experienced the journey vicariously through my brother. All the moments, the uplifting joy and quirkiness: Cloud's Fun Bath with Men, Squatting Contest with the Bros, Costa Del Sol, the Cruise in Disguise, recruiting Yuffie, the Golden Saucer.

Well, at least Cloud took Tifa to Pound Town underneath the Highwind that one night, right? Yup, he definitely took her to the Bone Zone. Someone please tell me he took her there. He did, right? RIGHT?! 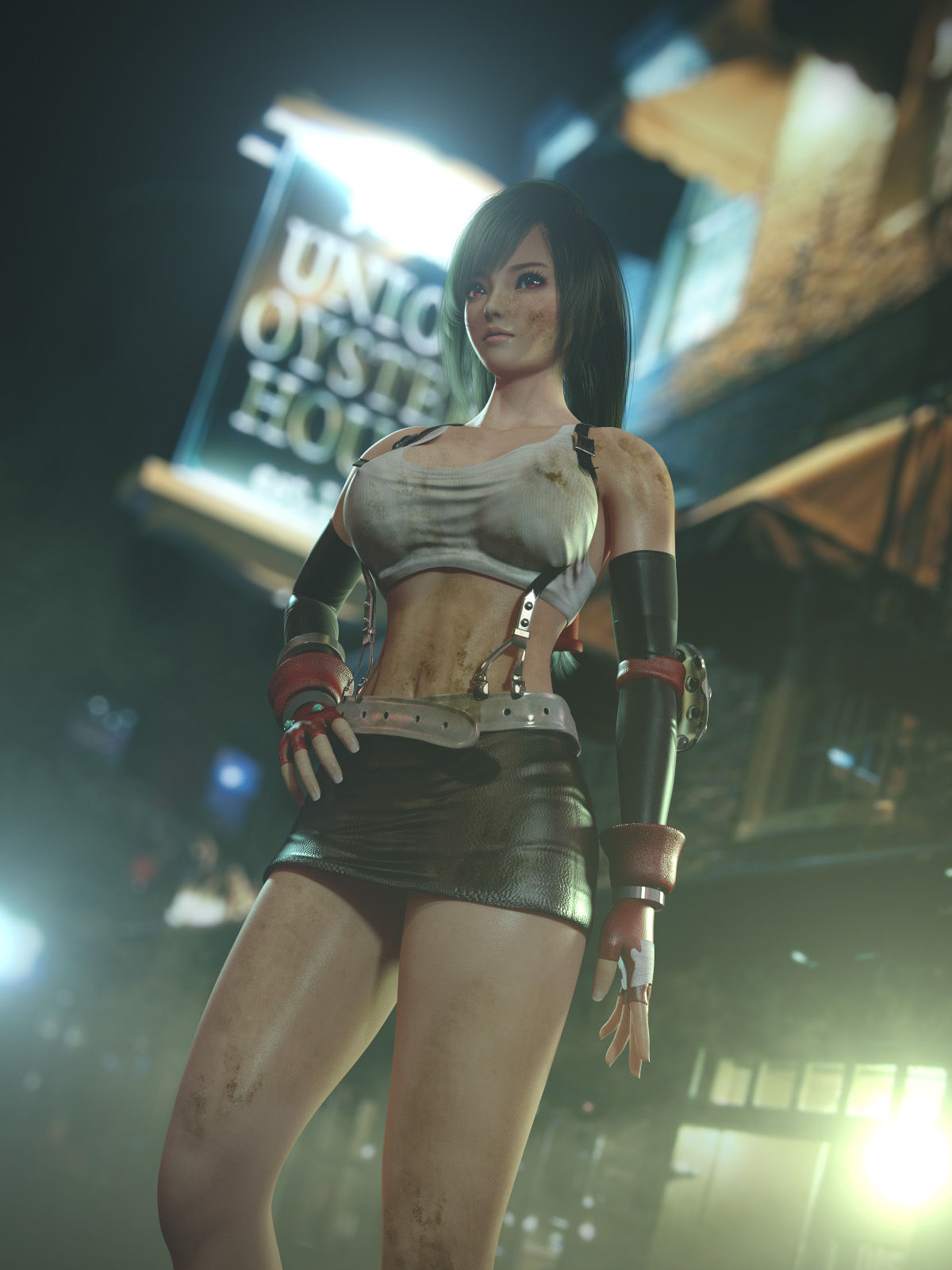 Find out if Tifa experienced Cloud's Meteorain enough times for him to unlock Finishing Touch in the Remake. Coming out in 2020

These moments would stick with me for the rest of my life and become the catalyst for my love of my favorite genre: the RPG. Leveling, progression, outfitting characters with equipment, characters having different roles in battle, etc. I never even knew optional bosses were a thing until I saw Emerald Weapon wreck my brother's shit.

Even all the bullshit rumors in the early days of the internet (CheatCC, anyone?) like the Wooden Chocobo, moving that damn fish to revive Aerith, combining all the 1/35 Soldiers to make Sephiroth, all that time wasted to see if it's true. It all started with FFVII for me.

Damn, this blog played out differently in my mind. If you're as confused as I am right now, my point is that Street Fighter II and Final Fantasy VII are two of my life's defining games and cultivated my love for the vidya with an inclination toward RPGs.

I still immensely enjoy games of all genres; my other absolute top-tier favorite games are the Metal Gear Solid and Shenmue series, but that's another blog for another time. Pretty much everything except for MOBAs, I just really suck at them.

TL;DR: my favorite games, in no particular order (with the console(s) I mostly played it on) -

I know I'm probably forgetting some games but those are the ones off the top of my head. Alrighty then, thanks for reading (or not reading and looking at the pictures). Take care, and I look forward to getting to know everyone more.

Remember to eat your ice cream, preferably out of waffle cones. 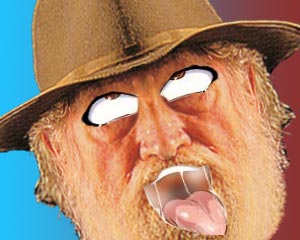 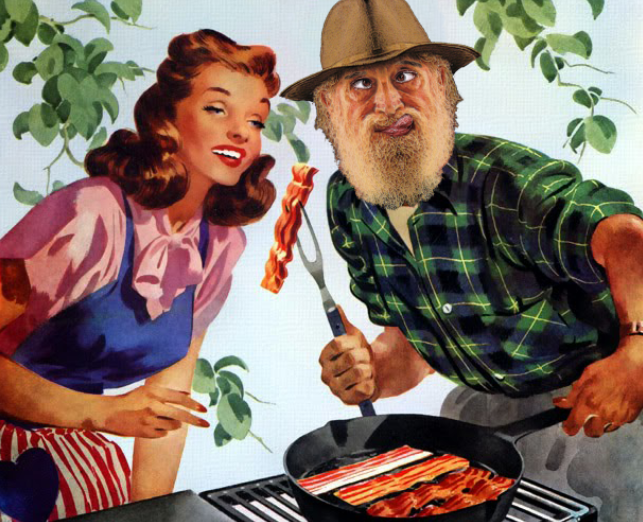