Welcome to Bass Comments of the Week! The show where I rip off the popular blogs of two influent community members to feature the content that really matters, which means mine. And only mine.

Well okay, Zer0t0nin is also featured this week because he asked politely. As always, the comment categories are:

LOL: Video games and anime are for nerds

WUT?:  Torchman likes video games and anime. What's up with that?

Without any further ado, let's get to it.

From The price of the Ninendo Switch, and all its innards, is too damn high 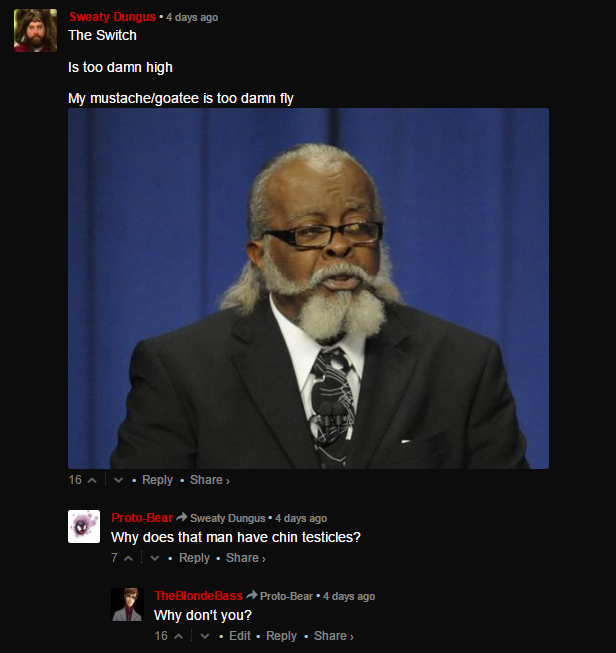 TheBlondeBass: Proto-Bear never answered. I can only hope he started his own journey of introspection, eventually resulting in a newfound appreciation of life and a swee pair of chin testicles. Unless Proto-Bear's a chick, then that would be more difficult. The chinticle part I mean. 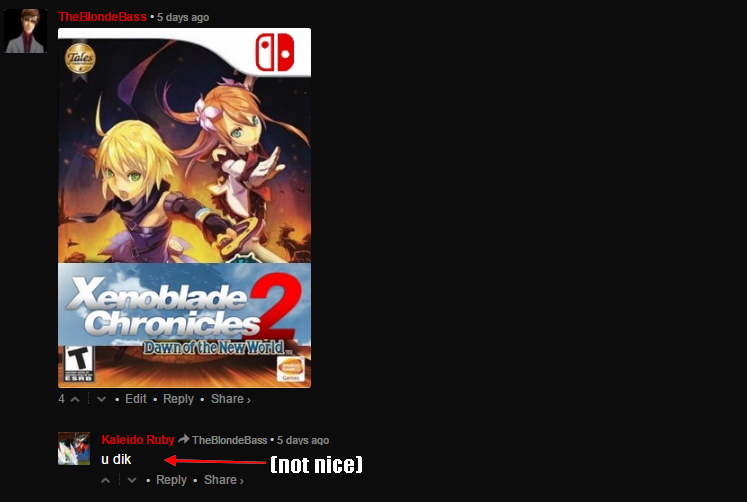 TheBlondeBass: When Shulk threw a Pokéball at the end of the trailer I burst into treats. What a rollercoaster of emotions. 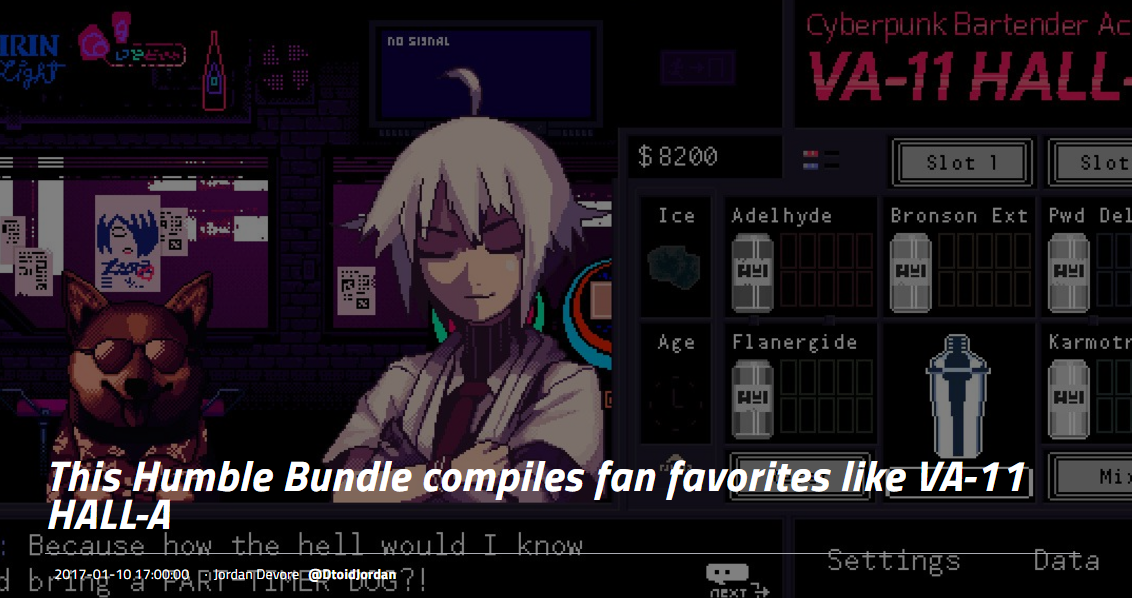 TheBlondeBass: This is in the truth category for a reason. Get to it. Now. 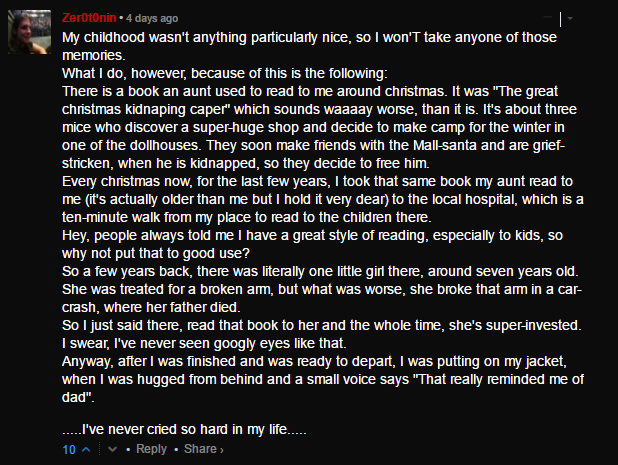 TheBlondeBass: I don't have much to add here, it's a touching story. I've done a bit of community work in the past, but nothing as cool as this... Shout-outs to you buddy.

From An unlikely pairing has given birth to Plague Road 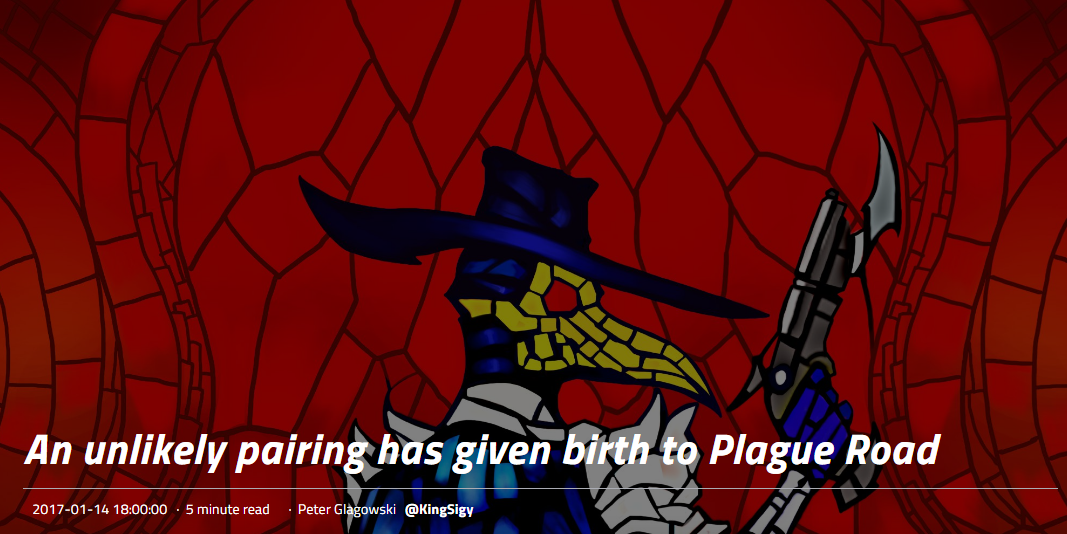 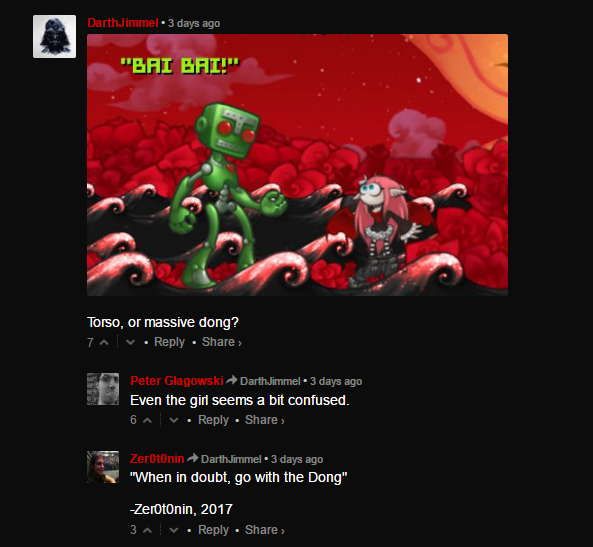 TheBlondeBass: Isn't this quite the change of pace from the touching story earlier? Of course, he's not wrong. Maybe wisdom comes when you realize it's okay to joke about dicks.

From There is yet another Guilty Gear Xrd update coming 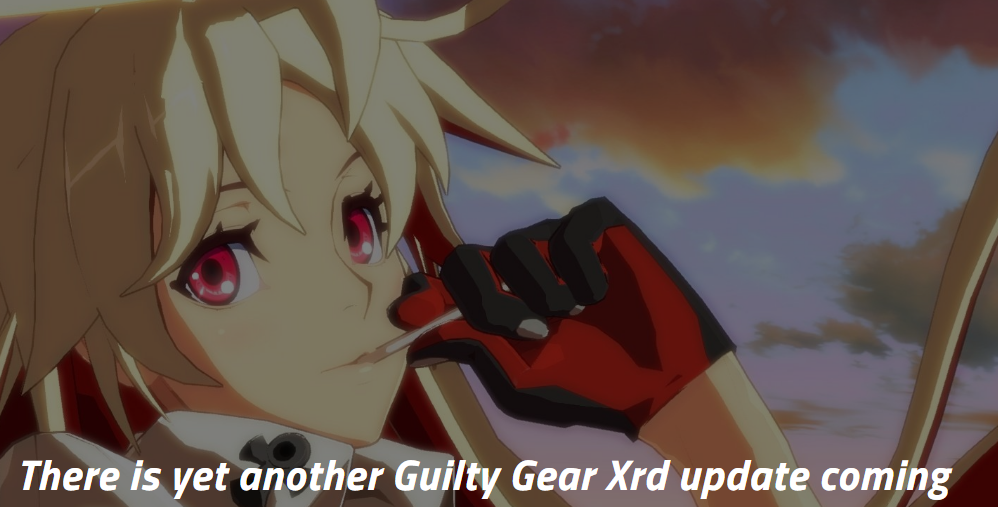 TheBlondeBass: First off, can I object to that article's title? Adding requested characters as DLC is a pretty good thing. But who am I going to complain about now? Robo-Ky? 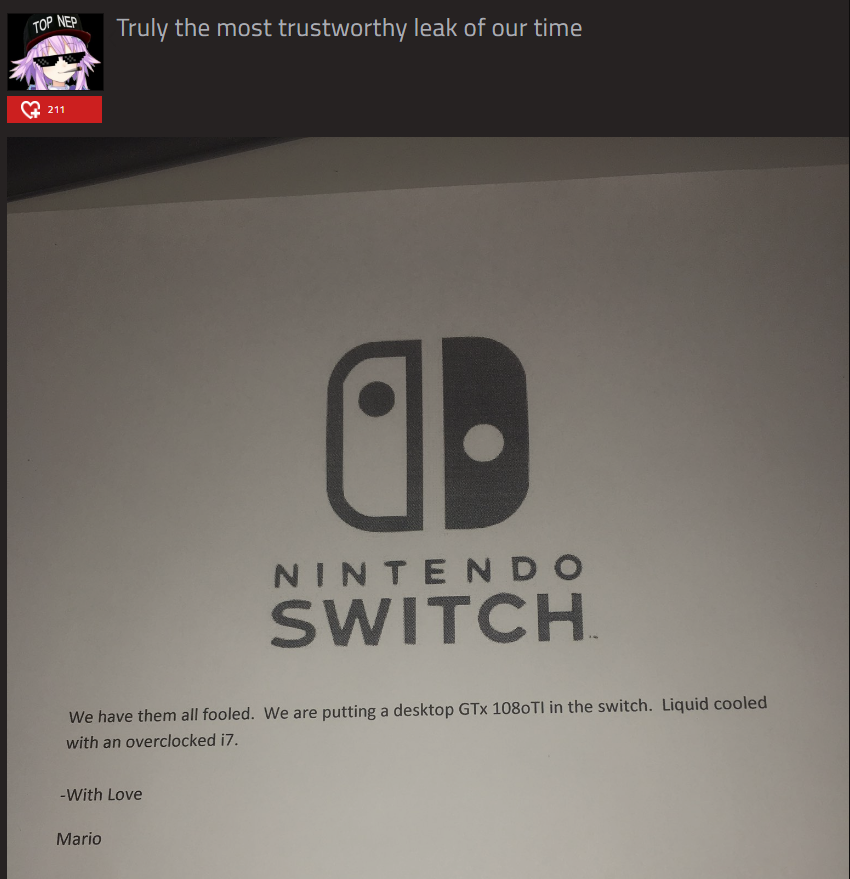 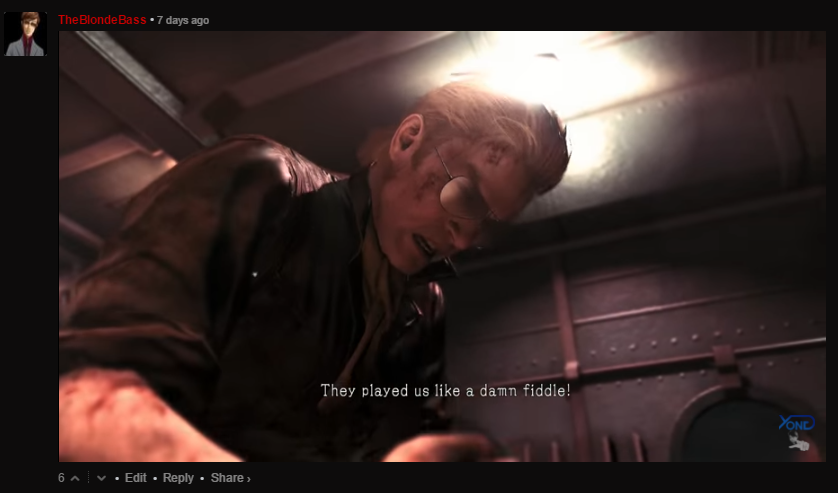 TheBlondeBass: A secret guarded so well that they haven't even shown the specs at the newest conference! 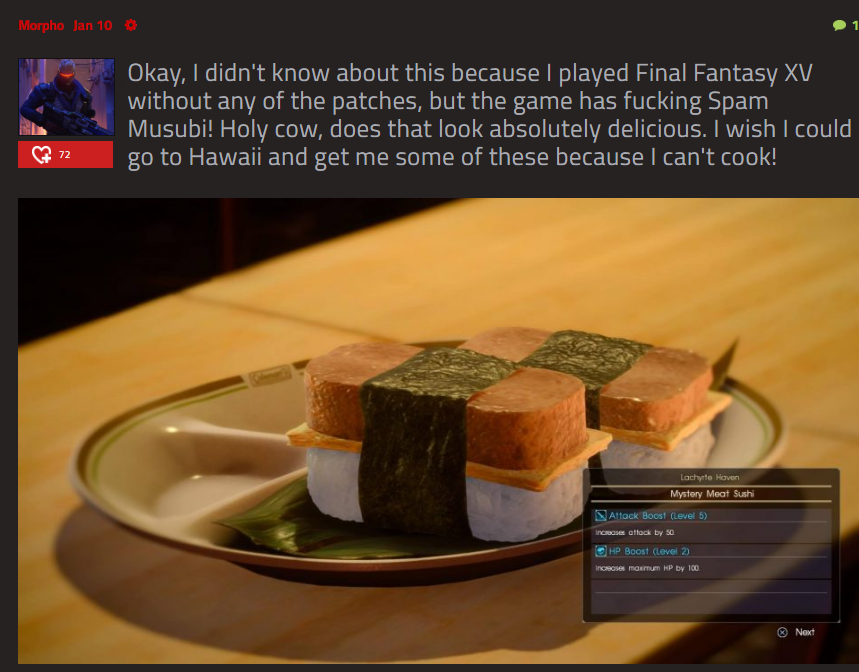 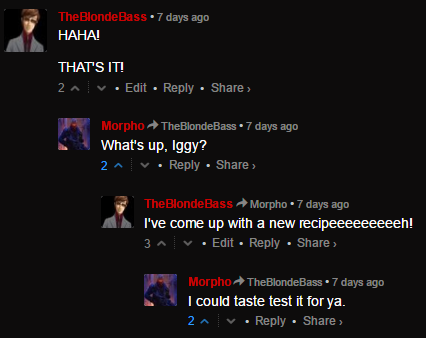 TheBlondeBass: You have to give Iggy some credit. Guy's able to think of recipes at any place and at any time. If that isn't dedication to your job, I don't know what is. 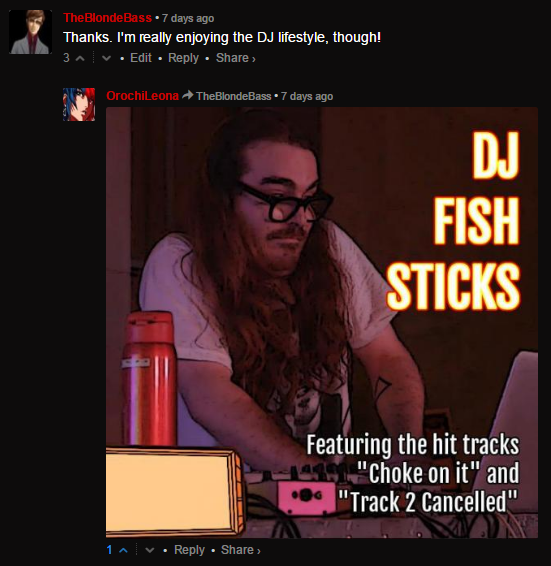 TheBlondeBass: Look at this loser acting like he's Phil Fish! That's silly, everyone knows he died in the 18th century.

TheBlondeBass: We're approaching suck-up levels which aren't even theoretically possible. You should be telling her she has shit taste!

From Fuzunga's Comments of the Week 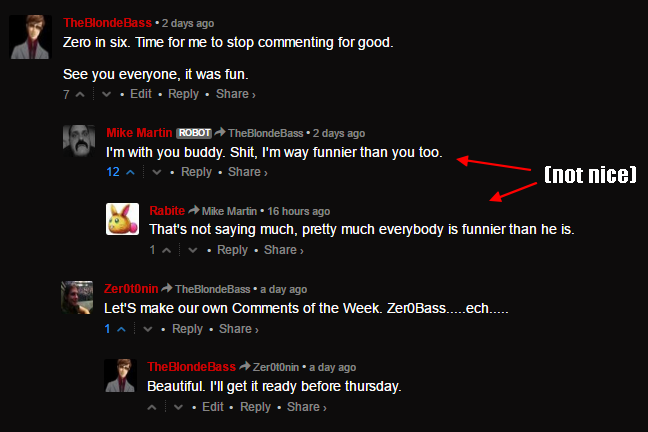 TheBlondeBass: You'd have to have your head inside your own ass to make your own Comments of the Week featuring your own comments only. Thankfully I would never fall to this level.

In all seriousness, this was just a little joke made during a boring evening, don't take it too seriously. I want to thank Fuzunga for doing Comments of the Week, they are always great fun to read! Even in this joke blog, the comments wouldn't have been possible without playing off other people, so comments of the week are always collaborative in a way!

Don't expect another one of these.