In 1993, Sega AM2 developed and released Virtua Fighter for the arcades under the Sega Model 1 hardware as the first 3D fighting game in history. It set a new standard on how fighting games are played, paving the way for such games such as Tekken, Dead or Alive, SoulCalibur, and Battle Arena Toshinden.

Now we all know the story on the game’s release. We know that after VF came out, Namco hired some of the developers from Sega AM2 to work on the first two Tekken games. We also know that Siba was supposed to be in Virtua Fighter, but was cut from the roster and appeared on Fighters Megamix.

What we don’t know is that there were a few more characters and designs thanks to the power of datamining through MAME.

It is known that developers have made several prototype and concepts of each character in Virtua Fighter. Some were changed while others failed to make the cut.

Nearly 23 years later, it turns out that there more characters that were inside the arcade version of the first Virtua Fighter game, and an alternate version of Akira. These character designs would later become an inspiration for Tekken since some members of Sega AM2 jumped over to Namco.

In this video shown above, there were two original characters and one alternate design for Akira. While Akira’s gameplay is still intact, the other two characters had an incomplete movelist. Let’s talk about them real quick.

Long before Tekken had Shaheen and Street Fighter had Rashid, Virtua Fighter had their own Arabian character named Siba. Now we all know the story behind this character: he was scrapped during development and his latest appearance was in Fighters Megamix.

It seems that there was more to this story behind this character. For starters, Siba’s name is actually Majid Abdul, which was changed sometime during the development before he was scrapped. He also had different movelist in the first game, combining some of Sarah and Lau’s moves. In Fighters Megamix, he had an original movelist with some of them involving his sword. 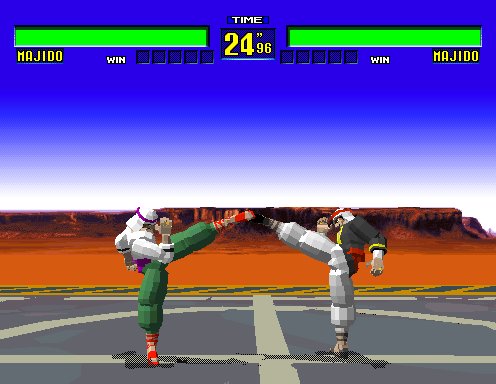 His occupation in the game is a bouncer. No background story behind why he entered the tournament.

Virtua Fighter had a military character long before Vanessa came into existence. There’s a character that was also scrapped from the roster named Jeffery Buckman.

Jeff is a military character, sporting camo gear, hat, and sunglasses. Both the hat and sunglasses can be removed if the character is knocked down. This character is an inspiration to Prototype Jack in the Tekken series. He uses most of Jacky’s moveset, but lacks throws. 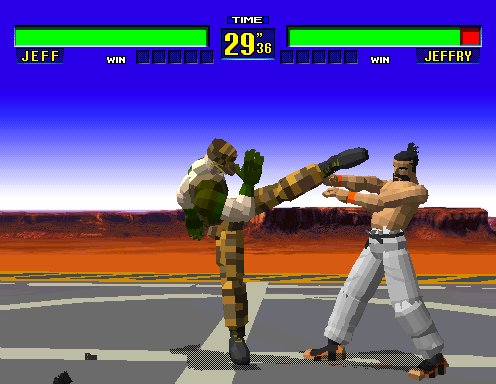 While the character didn’t make the cut, his first name was given to Jeffry McWild, who was previously known as Willie Roberts in the beta.

It may interest you to know that Jeff’s name is in reference to Jeffery Buchanan, who was the design staff member of the first game.

Did you seriously think that Akira’s name would be Yuki?

Akira replaced Majid during the development of the first game. However, Akira’s appearance and last name were different in the beta. His original full name was Akira Ryuzaki. 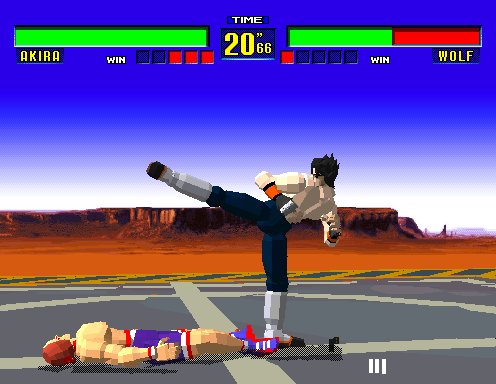 Akira had a previous design before he sported the white gi and headband. His original model had blue pants, silver gloves, and spiky black hair. Like Jeff, Akira’s early model would be inspiration to Kazuya Mishima in the Tekken series.

Not much to say about his movelist, since it is basic without any throws. 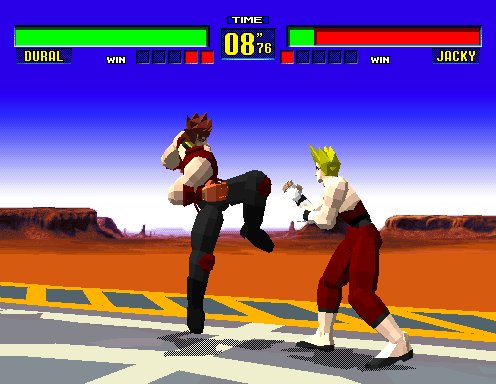 Takeru has a bio that states that he is a 22-year-old college student from Japan, and his fighting style is Karate. This was before Jean Kujo became a Karate practitioner in VF. In his gameplay, his moveset is linked to Dural’s and he doesn’t have a in-game portrait. He is the only character in the game that has three costumes.

His first costume is traditional karate gear in black and yellow, similar to the Cobra Kai uniforms in the Karate Kid series. The second costume has him wearing black pants with red kneepads and a red cutoff chestplate with shoulder pads. The third and final costume the same pants and kneepads in a different color (pants are blue and kneepads are yellow), and one yellow shoulder pad on his left shoulder. He is also shirtless with a scar on his chest, which could most likely be another inspiration design for Kazuya.

If Takeru was supposed to be the final boss in Virtua Fighter, then he would have been the first character in the game to represent Judgement Six instead of Goh.

I find it interesting that there were more hidden data in the game 23 years after the release of the first game. And the best part about it is that we all get to try them out thanks to the power of MAME.

If you have a MAME emulator and want to try out these characters, The Cutting Room Floor has the codes and such for you guys to try them out. They even have the unused names for Jeffry, Lau and Kage, which were part of the beta under the names of Willie, Tao, and Yagyu.

Now that I think about it, I wonder what other type of data is hidden from the game… The world may never know.