OFF REVIEW - The Bizarre and Grotesque World of Mortis Ghost 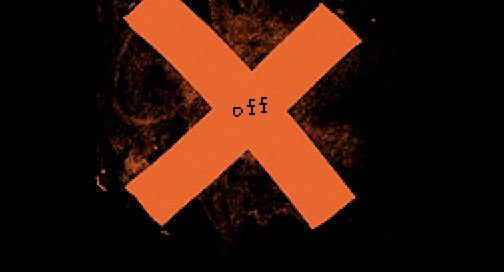 OFF is a lot of things, one of which is a game. OFF is an turn-based RPG, akin to Earthbound in it's style and wackiness. It's also a relatively short game as far as RPGs go, having a rough total of about five different zones (if you include Zone 0 and the Room). Despite that, it is a fun little quest, and not necessarily an easy one. Having plenty of tricky puzzles to solve, confusing architecture to navigate, and completely engrossing boss battles to fight, walking through this game's very unique world is quite the experience. 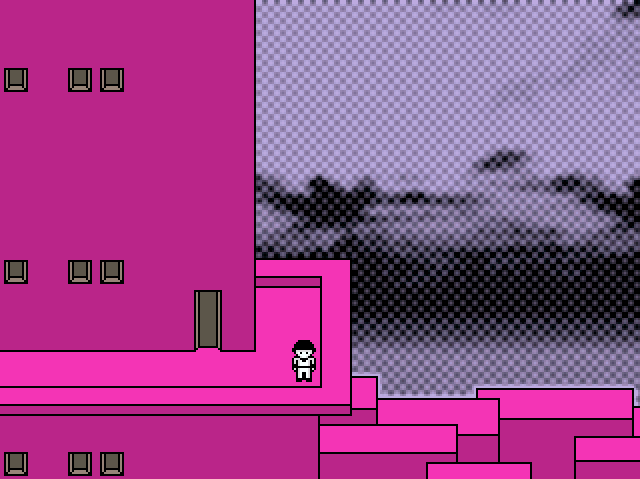 The big hook of OFF is it's world. This game's world is grotesquely intriguing, bizarre in nature and perfectly fine with it. The world, full of specters, Elsen (the game's population), talking cats, smoke mines, sugar plants, seas of plastic, awfully tall libraries, and the player's character, the Batter, out to purify everything, is so damn good. Oh, and the writing? Muy bueno. Every character has their own unique style of speaking, adding bit by bit to the wacky and quasi-mismatched style of world. Just talking to Elsen and absorbing the sense of anxiety, fear, or awkwardness is so engrossing. Just about everything from every character to every place is an experience, and while I could totally tell you all about the story alongside everything else, it's much more enjoyable to take it freshly from the primary source.

The game is very similar to Earthbound's style with the overhead walking and talking, but leans more so towards the likes of Pokémon with the battle encounters being a bit more random. The camera angle is good in the ways that it limits visibility of certain areas due to overlap, and the game makes use of that by sticking chests with goodies in all sorts of hidden places. This game has multiple zones (the game's term for worlds) and multiple sections in each zone, leaving plenty to discover and explore. 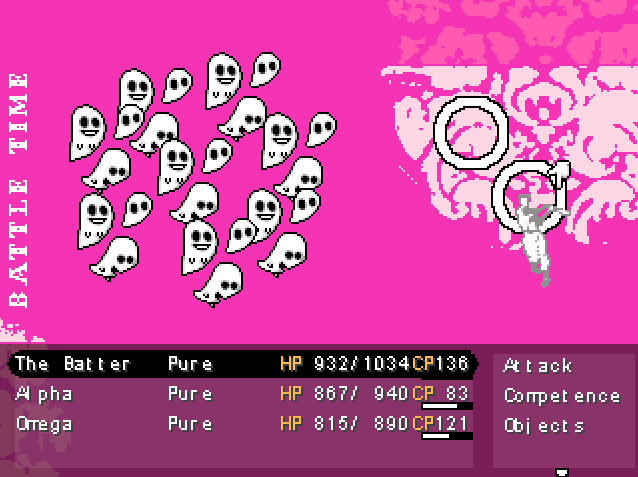 The battles, sadly, are a tad lacking once you're used to the mechanics. The Batter, along with three "Add-ons," each have rechargeable bars. Once a bar is fully charged, that character can then do an action. There's the basic attack, defend, use an object, etc., but alongside that is something called Competence. What competence is is a series of special moves that can do a variety of things, from doing some form of damage to healing to showing enemy stats. Competence also requires points to use, so while they're fun and all they can also run out if you're too aggressive with them. This leads to a decent play of balance between basic attacking, competence, and whatever else you may need to use; that, in conjunction to the Batter and the three Add-ons having different competence moves and stats, make combat a fun juggling act. All this being said, combat is by no means difficult. I maybe had an Add-on die here or there, but items and save points refilling life and competence were plentiful enough for me not to lose a fight. Combat just kinda happens, is mostly fun because you get to see cool and creepy enemies, and is something you get used to after a while.

One flaw OFF certainly has is item management. Items can do a variety of things, from heal to revive to whatever. The Batter and each of the Add-ons have one offensive equipment slot, three defensive slots, and one special slots. There are different items for the batter and Add-ons, and honestly it can get pretty overwhelming and over complicated with all the buying and selling and un-equipping and re-equipping. None of the equipment works differently than the last, only slightly better. So all the item management is not only sometimes plain taxing to keep up with, but it's also boring. Great. 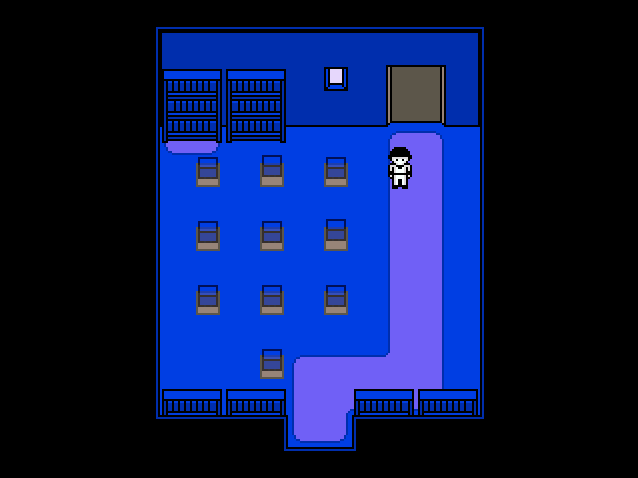 Puzzles are the mechanic's butter to it's bread, coming primarily in the form of pressing switches in a particular order, figuring out seemingly random numbers, or just doing something a tad random. They aren't particularly hard, and some characters give you ample hints, but a really (debatably) cool thing is how a lot of puzzles involve you actually needing to write stuff down. Hints are everywhere, and my best suggestion is scrawling them down in some order so that you can make more sense of them when you need to later. They're honestly pretty fun to keep up with; making it so that you have to write stuff down on paper is a fun way for the game to force some sort of memorization and organizational skills.

The aesthetics of OFF are debatably great. I say debatably, because it depends on who you are and if you like DOS styled graphics. The bold colors, large pixels, and relatively simple design of the main game meshes surprisingly well with the more detailed, grotesque, and bizarre drawings of faces and battle sprites. The art is fun to look at in my opinion, and the creepy vibe you take from it just fits so damn well with the world as a whole. That being said, the audio design is not too shabby itself. The soundtrack has a lot of ambience to it, but there are a few select tracks that are stronger, leaning either to the wacky side or the more serious one. Either end of the spectrum, they fit and they fit well. The sound effects are fitting as well, also being satisfying and enjoyable in that odd way that odd sound choice tends to be. Regardless, the aesthetics are a great skin on this interesting body, polishing it all of nicely. 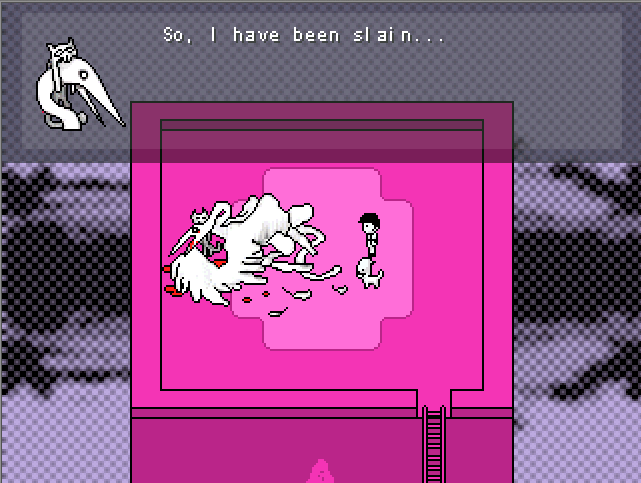 In all honestly, OFF is a damn hard game to review. I mean, I just don't feel like I can do it justice. I use the words bizarre, wacky, grotesque, and weird over and over simply because they're the closest words I can get to that unintelligibly perfect description of such an experience. OFF is a short but damn enjoyable play through, and I would suggest doing this: look at the fan art. If it looks as cool to you as it did to me, then damn you're gonna love this. Just watch out for spoilers, okay?