It's fashion time, mofos! Neogaf has a thread discussing the best and worst designed FF characters. Now most the people there seem to be morons without taste, not to mention dyslexic since a lot of the suggestions are party members, npcs and antagonists instead of main protagonists. So as the ultra hip and fashionable cat that I am, let me give it to you straight: The best and worst designed Final Fantasy protagonists, starting with the best. Also, I'll be only talking about the protags of the main series. 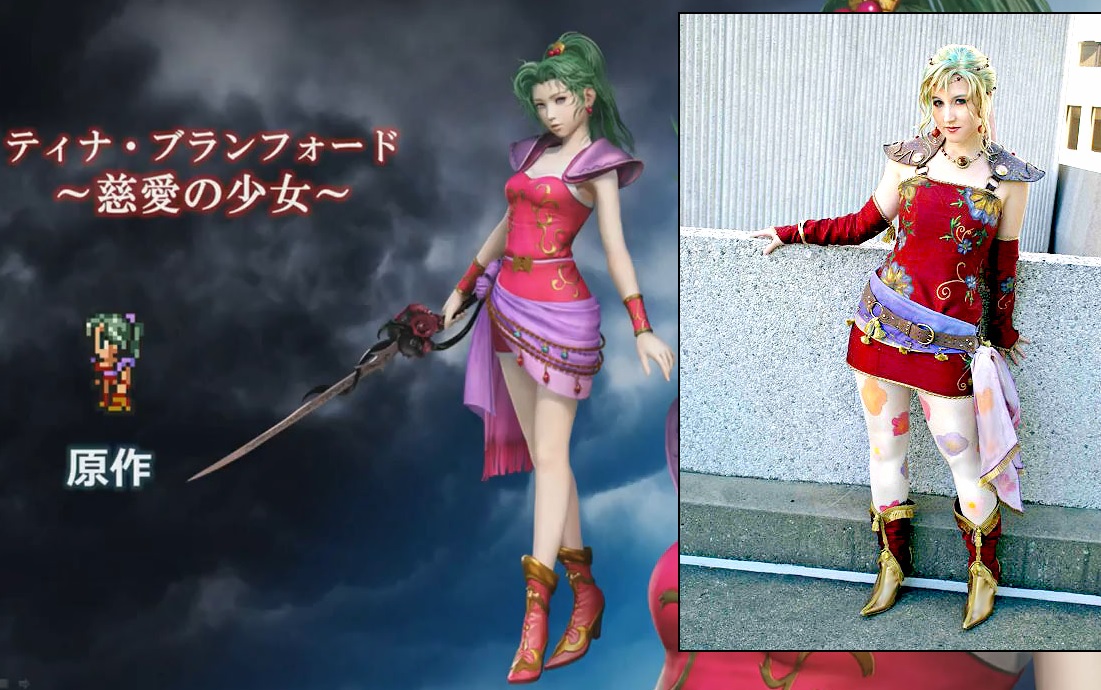 Perfection is what you call that. Elegant yet simple dress with a striking color and some nice details. This version skips the cape (never wear one unless you're a high-ranking medieval knight or a superhero) and adds some armor for the shoulders. And green hair is so much more striking and unique than blonde. The sash/skirt-thing is a nice accessorry that adds a feminine quality without getting in the way in battle.

The new Dissida version is a bit extreme on the shoulder armor (the second, light purple layer is a bit much), but all in all this design captures Terra's character as both proficient in magic and with a sword. Someone who's ready to kick ass, but also has sensitive side.
Cosplay picture source here: http://www.acparadise.com/acp/display.php?p=46648 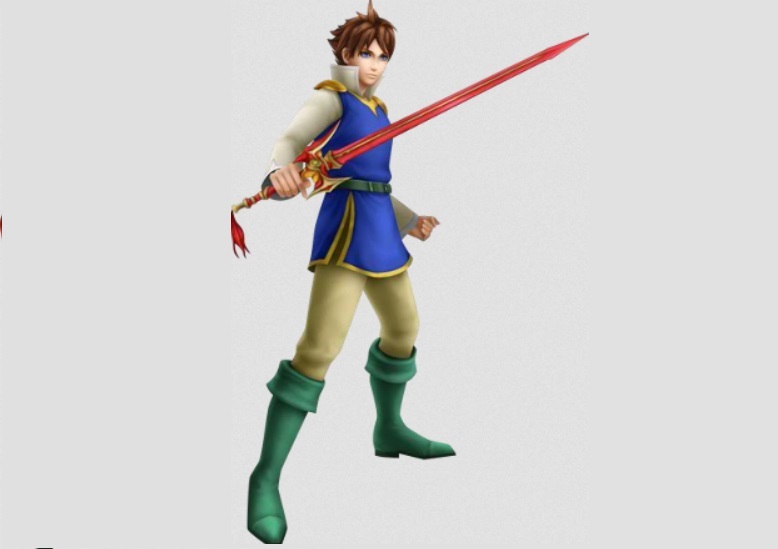 FF V introduces Bartz as a wanderer and adventurer. And that's what this design conveys. It's fairly simple, but that's also the beauty of it. It's good for many uses. For traveling the country side, fighting monsters or relaxing in a pub.

A simple white shirt with blue tunic over it, light brown pants and sturdy green boots offer protection, flexibility and style for almost everything you could encounter. There's nothing especially unique about it, but it still looks good and is a true and tried design, colorful, versatile and simply put solid. 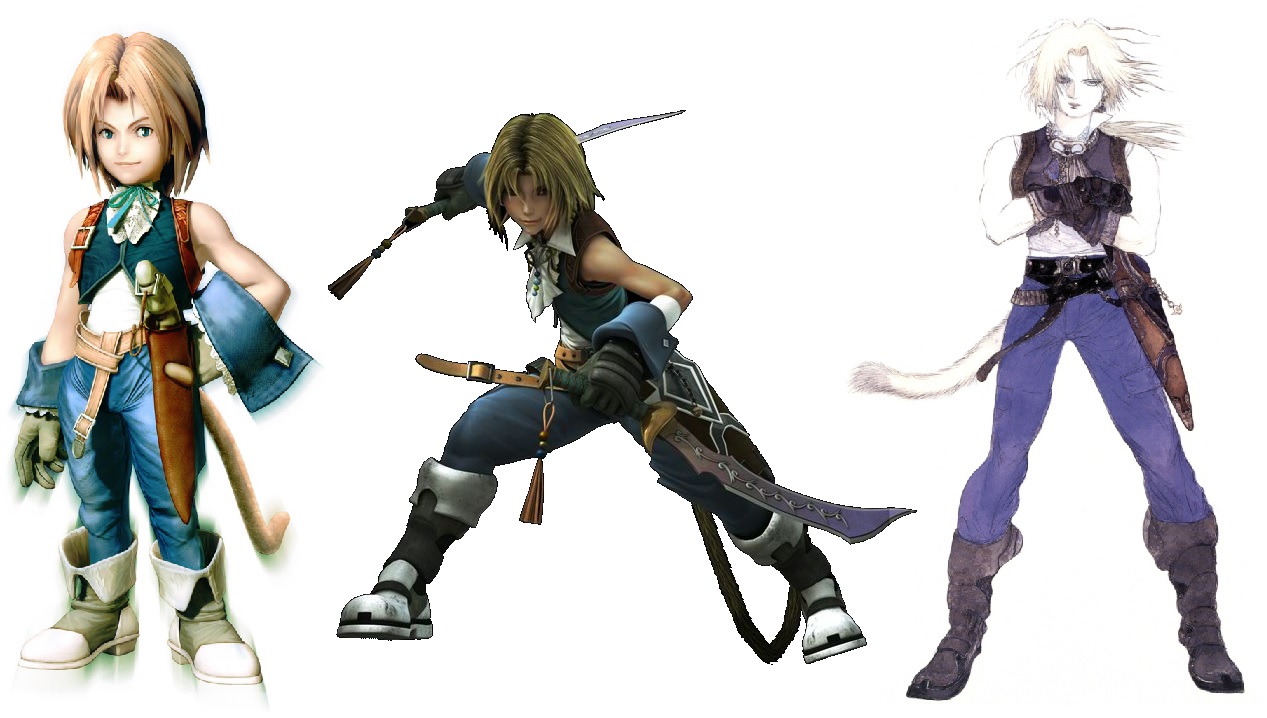 Some people don't like the art style of FF IX, and that's fair. But some thinks that makes Zidane's design bad. They're flippin' wrong. Period. And when portrayed with more realistic proportions (as he is in his Amano design and Dissidia version) his design is still badass. Zidane is three things: thief, actor, womanizer. And his design not only captures that, but also makes it look good.

A dark cyan vest combined and a white shirt with a frilly neck and thin bowtie oozes medieval, theatrical elegance. But bare arms, loose dagger at his side, sturdy gloves and cuffs let you know that he's no frail dandy. He's here to steal your heart and your treasure. Simple blue pants, brown belt (that's a little too long though) and sturdy boots completes the great, colorful and memorable design. The hair is a bit too poofy, but we'll let it slide because of the superdeformed style.

Now for the bad ones. 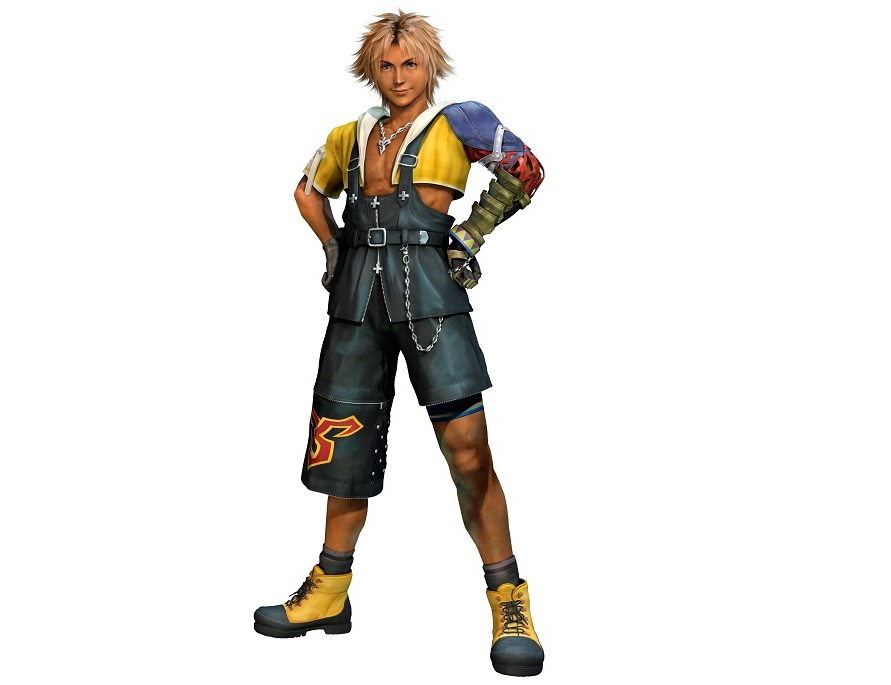 Unlike many people, I really like Tidus as a character. So it pains me to say that he's visually the worst designed main character. And you all probably already know why. The pants that are of uneven length, his lederhosen/overalls-thing, his jacket that is too short so you can see his sides and is also assymmetrical with one arm being covered by some weird gauntlet while the other is regular short sleeved, the bright yellow Mickey Mouse boots. I honestly don't know what the designer here was thinking.

I know I praised the top three for having color, but there something called too much a good thing. I get that it's supposed to be a uniform for an underwater sport. One where water can flow through and with a fabric that doesn't absorb water. But still, this is just bad. And the worst is that Shuyin in FF X-2, who bears many similarities to Tidus, has such a good design. That just makes it worse. Just look this and tell me that's not a better design (minus the Mickey shoes). 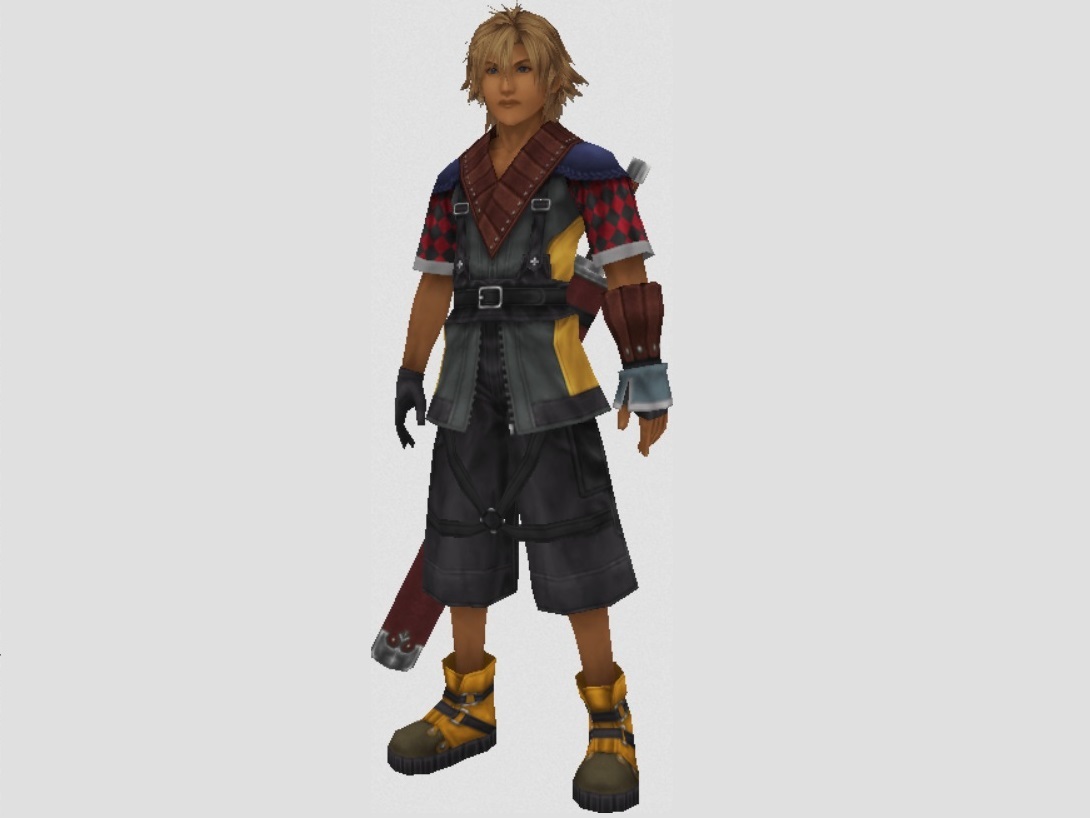 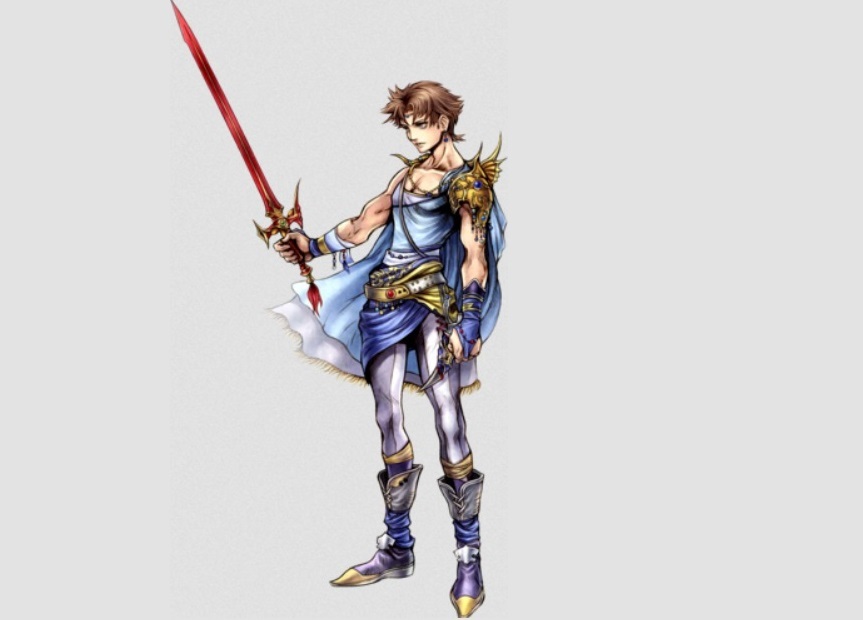 What's the point of the skirt? What's with that weird, pointy shoulder guard? This is something you wear to bed. Some sort of nightgown or pajamas. And for some reason all Amano characters must have capes. For fucks sake.  And this is the version that mostly appears in crossover games and spin-offs instead of the sprite version. Geez. 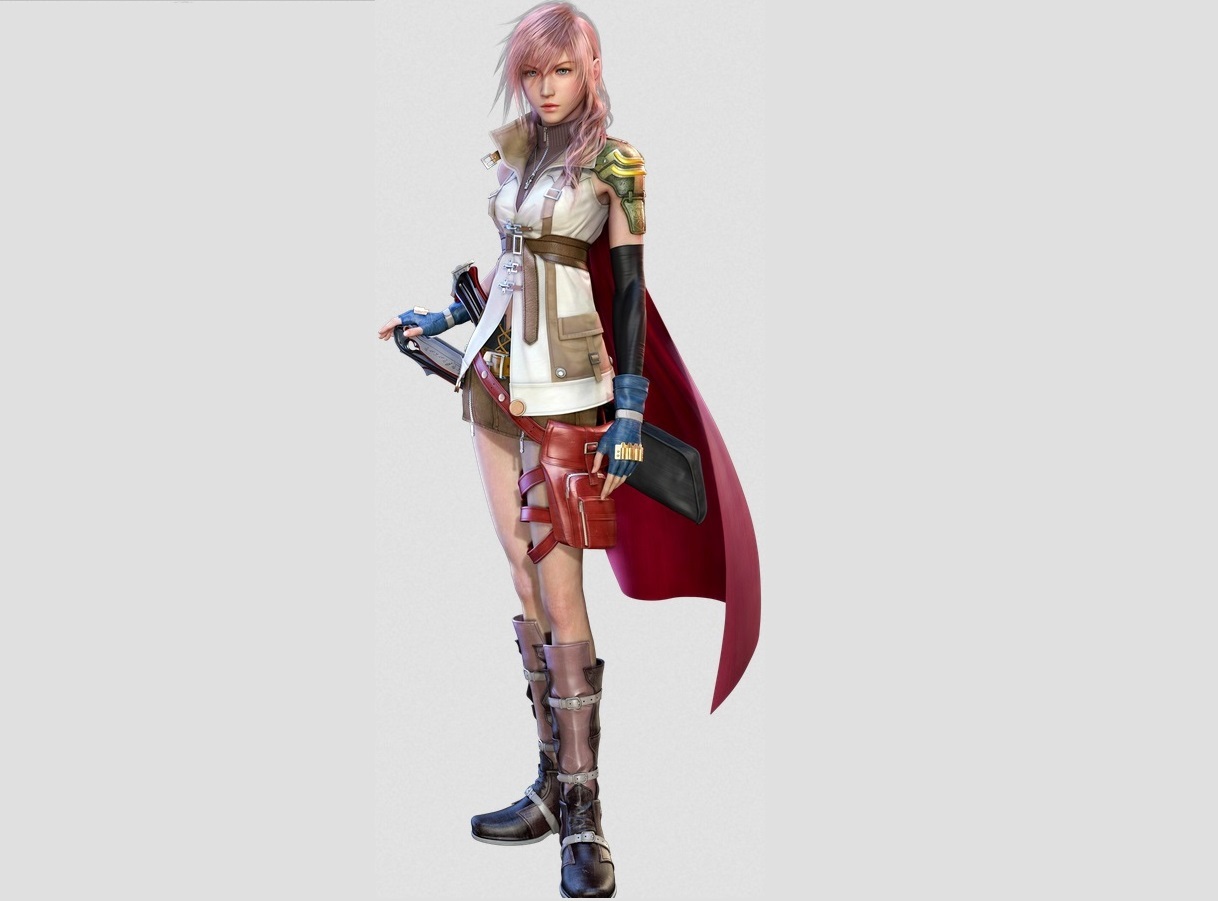 To be perfectly frank I don't think Lightning's design is all that bad. In fact, I like most of the XIII cast's design. But Lightning rubs me the wrong way a little, and there are two reasons for that: Cape and skirt. And her outfit is supposed to be a military uniform, or some version of it. The cape, that's more like a thin scarf actually, serves no purpose. It's a wonder it doesn't get stuck on every hallway corner.

As for the skirt, it's so short. What sort of military officer uses something like that for combat? Put on some pants, soldier! I would get it if it was some sort of parade uniform. Some of those actually have capes and skirts. Bu why would you even wear a parade uniform to battle. The rest of the design is pretty all right though. 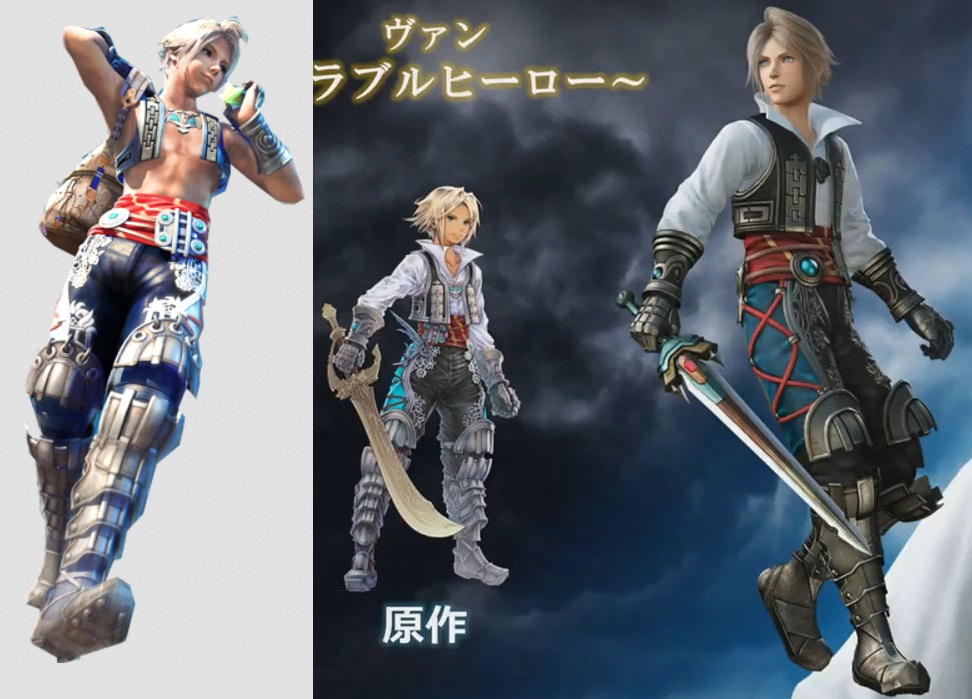 You may wonder why Vaan isn't in the top three. A lot of people think he's one of the worst. And Vaan looks kind of stupid, but that's only for one reason. His upper body and painted-on abs are only covered by a super short, thin open vest. And that can easily be fixed by just putting on a shirt. Which is what he does in FFTA2, along with a longer vest.  And then he suddenly looks pretty allright.

So there you have it. I actually think that most FF protagonists look pretty good or at least all right. As do many party members, npcs and antagonists. If you want to say what you think are the best and worst designed FF protags or other characters, main series or not, let me know in the comments.