Banana Bonanza is one of those simple, easy to make on flash platformer games that is just that: simple and easy to make on flash. Is it good? Not particularly. There's nothing about it that stands out or impresses. It has a simple premise: tribal hooligans are invading on Marv the monkey's bananas, so obviously he's gotta kick butt, explore the temples until he finds each shrine, and collect a boatload of bananas along the way. It's simple, but it works.

Mechanically is a slippery slope with this one. Everything is either decent or subpar. The platforming is nothing but running and jumping. The running is a moderately quick pace, being fast enough to keep an exciting pace but not so fast it's uncontrollable. That's the jumping's job. The jumping itself isn't too terrible, but it can become quite frustrating if you don't yet have your bearings. The game obviously tries to go for a classic Sonic the Hedgehog approach, with lots of speed and flow to its platforming, but due to level design and the hard to control jumping and running combo leads to plenty of deaths. The running, like I said, isn't uncontrollable, but it is still pretty damn hard to get a good grip on. 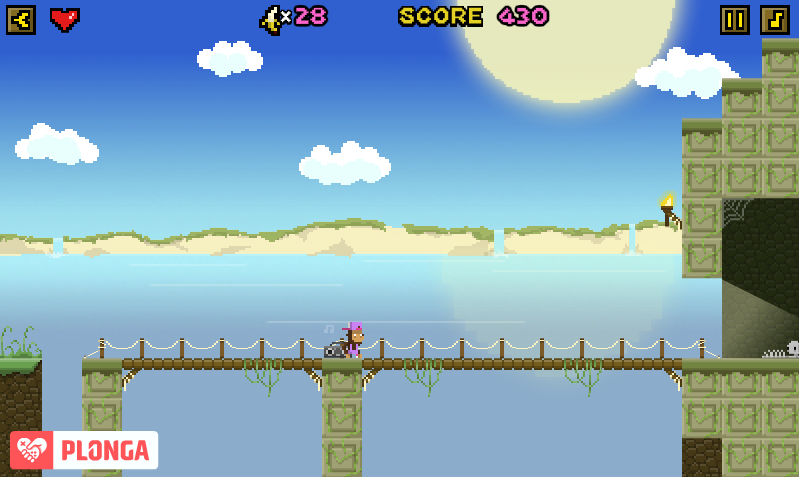 All the keys used to control such running and jumping would be the arrow keys, so this whole game can and kinda has to be played with just one hand. This is good and bad. Good, because it required minimal effort to play, and bad because this hinders the game's potential. With an extra button for general actions, new platforming abilities, or maybe an attack there would be so many more options for how you go about levels. I don't mind just jumping on enemies to kill them, but in all honesty there could've been more.

There are a total of thirteen levels in this game, with nine regular ones, three bonus ones, and one bonus one separate from all the other bonus ones. In each regular level there are three gems to find and collect, and once you get a certain amount of these gems you open up a bonus stage. These bonus stages are short banana collectathons ending in a key, which help unlock other bonus stages. What's different about the last bonus stage? No clue, because I honestly didn't care enough to get past level eight. It's a nifty way to spread out levels and incite motivation to go for gems, and since each level is decently long and take forever due to controls, the game isn't too short as a whole. It's kinda a shame the level design isn't too terribly different and a lot of the levels end up being unmemorable and forgotten. 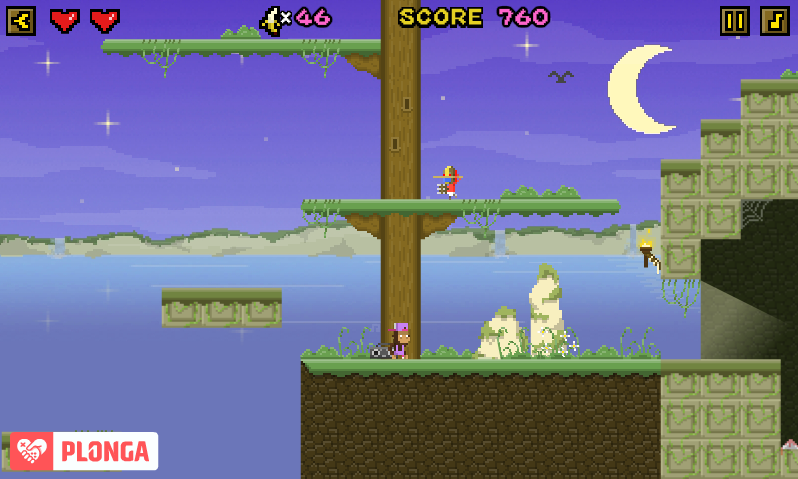 The aesthetics are the one factor that truly shine in my eyes. The art is this beautifully pixelated style that mixes retro-styled sprites with more a more popping color pallet. Everything is so damn bright and vibrant and pretty. There are lots of browns, greens, tans, and blues and they mesh awfully well together. The main character wears purple, too, so he stands out among everything. The animations are great as well. It's that perfect balance between looking too retro and too fluid that this game nails perfectly, begin smack dab in the middle of both, looking somehow both retro and fluid. There are all these cool little details, like how the outside turns dark when you go into a part of a temple, that make the visual design boom.

The music design is pretty great as well, but suffers a fatal flaw. The tracks are good, fit the game, and some even remind me of Mario Kart 64 music. The chiptune is spot on and helps create a fun, almost tropical atmosphere that I can't help but really enjoy. The only problem with all of this is that every track is painfully short. I enjoy the theme played in the levels, don't get me wrong, but when it's in literally every level and short as a mug? It kinda gets under my skin after a while. It's short but sweet in a way that makes you sick of sweets. 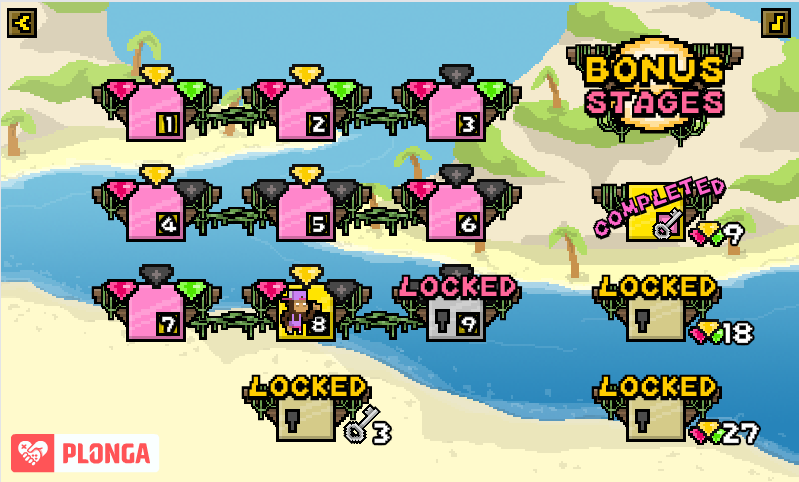 And that's Banana Bonanza. It's a basic platformer, and while I did kinda trash talk it the entire review I enjoyed playing it enough to properly review it. It's a fun little thing while it lasted, and honestly that's all I ask for from a flash game. It has it's ups and it's downs, but I love games, and flash games, and platformers, so I still have some form of love for this game.