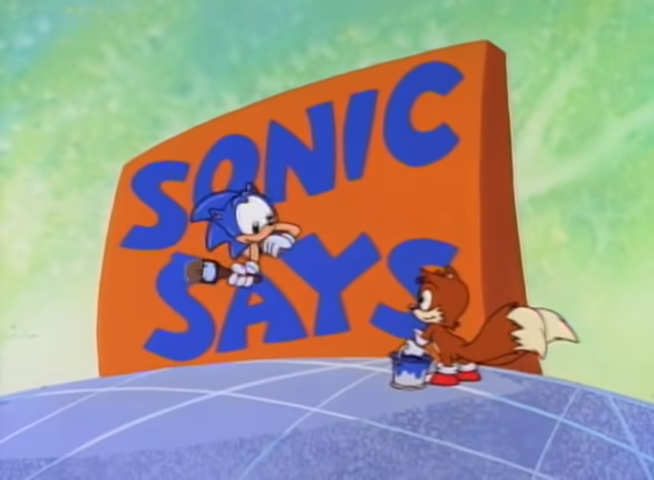 I interviewed the Sonic the Hedgehog cast to hear their thoughts on Sonic Mania. Let's start with the lead character. 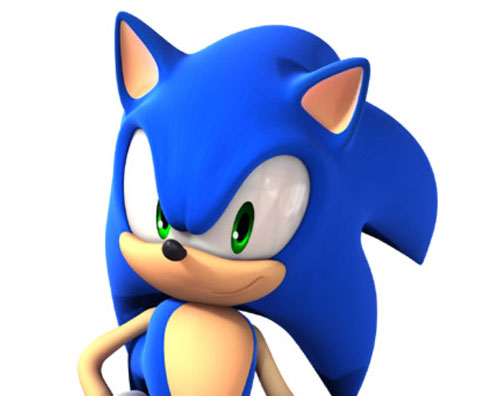 Sonic The Hedgehog: Hey there! What's up?

NS: Excellent! So what are you most looking forward to from Sonic Mania?

STH: I'm excited that fans are looking forward to a new game in the series! I know fans were waiting for some time to find out what the next games in the series would be. I appreciate their patience. I know I couldn't wait around for that long.

NS: I believe the announcements were worth the wait for many fans. However, many fans have complained in the past about an overabundance of 3D games. Now many fans have been complaining that we're seeing too much classic gameplay. What are your thoughts?

STH: I understand that fans have many expectations for my games and I really hope Sega delivers what they want to see.

NS: What would you like to see in Sonic Mania that hasn't been announced?

STH: Well Sega doesn't tell me everything, but I do know a few things that I can't say. As a fan, I'd want to know if you can use the Super Peel Out move.

NS: I completely agree. That would be really cool to see again. Before I let you go, how was the Rio Olympics?

STH: It was tight! My friends and I participated in so many events including golf, volleyball, and football. It was really nice to see Mario and his friends again too. I enjoy visiting them during special occasions like the Olympics and Super Smash Bros. I didnt get to race Usain Bolt though.

NS: Why was that?

STH: Mario and I were working with the Miis to stop one of Bowser and Dr. Eggman's evil plans. Pretty lame that those guys were up to tricks during Usain's races. I'll have to beat him another time. Heh heh!

NS: Definitely! That's all the time we have. Thank-you for speaking to me, Sonic.

STH: No problem! We might have to race some time if you think you're as fast as your name implies. Shadow The Hedgehog: What do you want?

NS: I wanted to know if you've heard about the new game Sonic Mania.

SH: Game? I don't have time for games. I'm the ultimate life form! Such things are beneath me.

SH: I appear in video games, but I don't play them.

NS: Okay then. Even though you wouldn't be playing it, what would you like to see in Sonic Mania?

SH: I said I don't care. I must look to the future and continue my mission to save humanity.

SH: Enough! This is a waste of my time!

NS: Okay. Bye I guess? I wonder if Silver would have recommended the signpost feature. 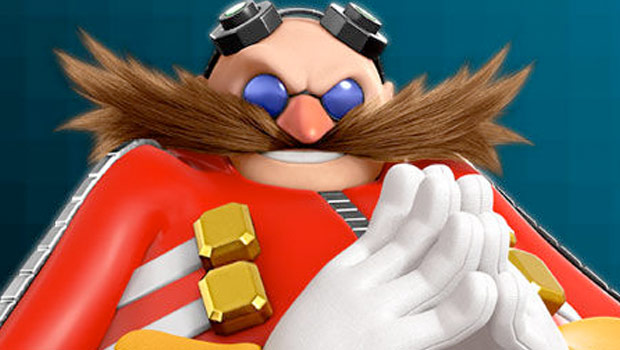 NS: What are your thoughts on Sonic Mania?

DE: You want to know what I think about yet another Sonic game? I'll tell you what I think! I have a pretty cool wrecking ball weapon at the end of Green Hill Zone and a beautiful dancing animation in the background of Studiopolis Zone. Besides that, it's another celebration of that vexing hedgehog.

NS: I'm sorry you aren't looking forward to the game.

DE: On the contrary. I have another chance to beat Sonic at the end of the game. There are new levels for me to fight him on meaning new chances to defeat him. Since it will feature more than recreated levels of classic stages, hopefully this will go better than that Time Eater catastrophe.

NS: Well, there are more recreated levels than brand-new levels.

DE: Ugh, don't remind me. It just means getting defeated all over again.

NS: At least, we'll hear some remixed music from the returning stages.

DE: Ho ho! You're right! If Sega includes a remix of the Big Arm music, I'll breakdance with Cubot and Orbot! It would be great to see Sega pull out all the stops with a Sound Test of all the remixed goodness this game could offer. For example, Sonic CD levels could have a remix of their American and Japanese songs! Game composer Tee Lopes, you have your work cut out for you.

NS: Wow. Amazing suggestions Doctor! It would be... interesting to see you breakdance. Thanks for taking the time to speak to me.

DE: You're welcome. Now if you don't mind, I have an evil invention to get back to. They don't build themselves, you know. Rouge the Bat: Hey you!

NS: What would you like to see in Sonic Mania?

RTB: Well, Sonic Mania is focused on the classic games and I didn't appear in those titles, so I don't know what to say. Sega can do whatever they want as long as the game's good.

NS: Fair enough. Since you didn't appear in the classic games, would you like to see any other games receive a remixed level?

RTB: Hmm... It would be easy to say Sonic Adventure 2 for obvious reasons, but maybe Christian Whitehead, Stealth and the development team can include a couple levels from some other games from the classic era. I mean people are probably expecting a couple of remixed levels from Sonic 1, 2, CD, 3 & Knuckles,  plus a few new levels. Maybe they can throw in a couple surprise remixed levels too.

NS: Which games do you have in mind?

RTB: A Sonic R level would be interesting. I mean who wouldn't want to hear a remix of one of that game's songs? If they can make a traditional level out of a Sonic Spinball or 3D Blast zone, I'd be pretty impressed. Maybe throw in a Game Gear title like Sonic Chaos or Triple Trouble to round it out.

NS: Great suggestions! I'm sure a level or two for any spin-off titles like you mentioned would be appreciated. Thank-you for taking the time to speak to me.

RTB: My pleasure, darling. By the way, have you seen my interview series Ask the Sonic Heroes?

RTB: Why thank-you. I better get going. There are some gems out there with my name on them!

NS: Have you seen any gameplay of the upcoming Sonic Mania video game?

KTE: Oh yes I have! Tim Gettys was playing as me for Kinda Funny Games so it was really cool being back in action again. No more playing animal babysitter with Amy. And by the way, I believe the game is called Sonic Mania & Knuckles.

KTE: I'm just kidding. That would be a better title, though. *cough* Anyway, my animations look pretty sweet in Mania. Whether I'm hanging on ledges, climbing up walls, or posing at the end of a level, I look good!

NS: *laughes* So what else would you like to see from the game?

KTE: Probably the Master Emerald in Hidden Palace Zone. I'm barely seen protecting it any more, but I have been most of the time that Sonic and Tails are off on another adventure.

NS: That's really great to know. A lot of fans have been wondering why you don't seem to protect it much, but I'm glad you've returned to Angel Island to keep an eye on it.

KTE: I also think Knuckles' Chaotix could be represented in this game. The developers could include a remixed level or an option to use Ring Power with two characters in each level! Either way, I'd like to see my first solo game represented somehow.

NS: Sounds good. Thanks for the interview Knuckles.

KTE: It was my pleasure.

Miles 'Tails' Prower: Hi! Thanks for interviewing me.

NS: You're welcome. So what do you know about Sonic Mania?

MTP: I know it's a new Sonic game made as a love-letter to the Genesis era games. It's developed by Headcannon and PagodaWest Games including Christian Whitehead who worked on the iOS and Android ports of Sonic the Hedgehog, Sonic the Hedgehog 2 and Sonic CD. Sonic, Knuckles, and I are playable characters and the game features new levels as well as remixed levels from past games.

MTP: I do my research. Ha ha! I am curious if the game will include special stages. I mean I'm sure it will, but which one? The original maze stages for the first Sonic game, the 3D tube stages with Sonic and I from Sonic 2, or the blue and red spheres from Sonic 3 & Knuckles?

NS: That's a good question. I expect to see special stages in this game as well. Since those three examples you mentioned are the most popular format for special stages, which one would you pick?

MTP: Hmm... It would be easy to pick the Sonic 2 special stage because that's the game I first appeared in, but I think we've seen that kind of special stage a lot over the years. The Sonic 1 special stage always confused me because I couldn't properly calculate how to move around that maze.

NS: I had the same issue when I played Sonic the Hedgehog when I was younger. It would give me another chance to figure them out though.

NS: Agreed! Thanks for the interview Tails. I'm a big fan.

MTP: Really? Thank-you so much!

NS: Are you excited for Sonic Mania?

AR: Sure. The game looks fun and everything, but... why am I not playable? Christian Whitehead, are you keeping me a secret in the game? If so, I'm perfectly fine with that. Saving the best character for last and all. Because if I wasn't playable, I'd be pretty disappointed. Then I'd have to chase you down so I can join the cast of playable characters. You got that? I want to be playable!

NS: I'm not sure if Mr. Whitehead is reading this interview. That being said, it would be nice to see you as an unlockable character since you weren't playable in the Genesis era games.

AR: I really hope so. It would just be so cool to finally give Metal Sonic a beatdown myself, you know? I really hope Metal Sonic is in the game, just so he can get battered again. Anyway, it wouldn't be the end of the world. I just like being in the Sonic series as a whole.

NS: Well, we're happy to have you. What is the most exciting aspect of this game in your opinion?

AR: The gameplay looks like a lot of fun and I know I'm really interested in seeing what else is included. Mr. Whitehead has added some cool features to his ports like Boss Attack Zone. Those fun additions plus new options from the 3D Classics Sonic games like Ring Keep would be welcome additions for old school fans.

NS: Is there anything else you'd like to see regarding the Sonic series?

NS: I certainly hope Project Sonic 2017 and future 3D games bring back some of the crew like you, Knuckles, Cream, and Blaze. Sonic and Tails can't do everything alone. Thanks for joining the discussion about Sonic Mania, Amy.

NS: I would appreciate that! 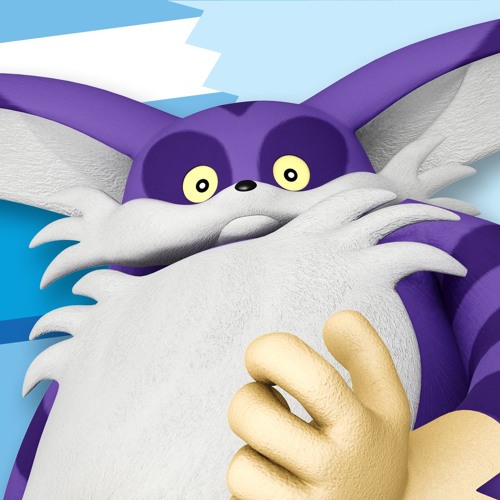 NS: And that's all the time we have! Thank-you for reading and don't miss Sonic Mania, set to release in Spring 2017.