I won't even dance around my judgement on this one: Phoenotopia is not only one of the best flash or freeware games I've ever played, but also one of the best games in general. Being an expansive 2D platforming Metroidvania on par with some of my favorite games in the genre, Phoenotopia is a hard gem to pass up. It's exciting action, ingenious puzzles, and rich world make for such a wholesome experience that I would easily consider it better designed than most games I've played to date. It's just so damn impressive for what it is: a flash game. People hate on flash games, as a whole lot of them can be simple time-wasters, or maybe just short experimental titles. But this game? This game is a huge, very polished experience, through and through.

Oh boy, where to start… 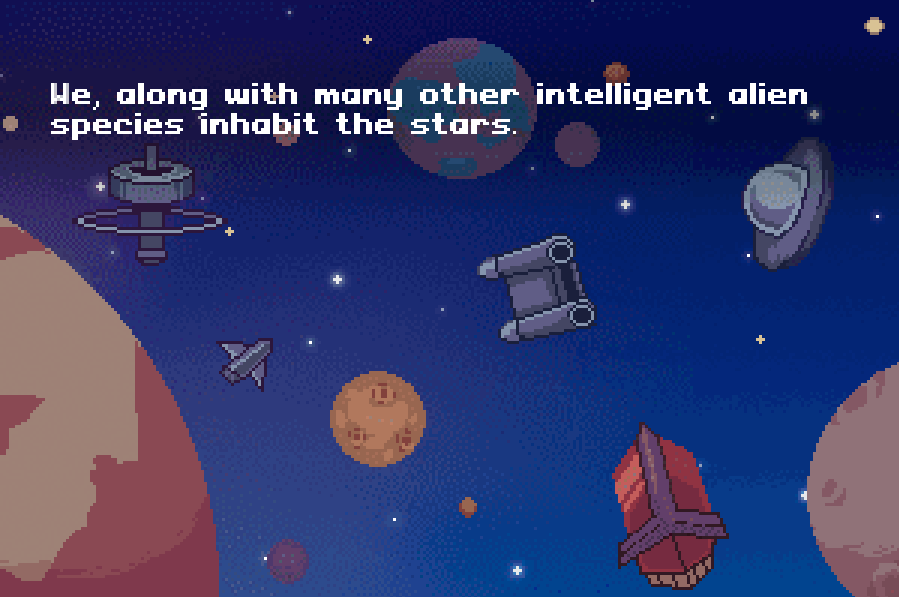 The world of Phoenotopia is a rich one. Taking place on an Earth after a gigantic war and in the middle of an intergalactic one, Humanity went to two places for shelter and rebuilding:  the stars, and the ground. You play as Gale, a girl from the ancestors who took to the ground. You're sent on a grand quest right off the bat: to come get the kids from the forest and bring them back (probably because diner is gonna be done soon). Alright, so maybe that's not too terribly epic. But what is epic, however, is how on your way back, everyone in the village you just left gets abducted by aliens! And you end up begin the humble volunteer to go and get everyone! Yay for leaving a town of ten year olds all alone! Regardless of child neglect (they'll be fine), this game's world is diverse, with an interesting mixture of fantasy and sci-fi weaved throughout nearly every location, and the writing is, in short,

This game is absurdly big for a flash game, and even if it was a regular release title on Steam or GOG it would still be a sizable game. The world hosts a solid seventeen diverse and different locations to explore, backtrack through, and re-explore until you finally found all the collectables and upgrades. Each location has it's own enemies, challenges, puzzles, part in the story, etc. As you explore more and more and obtain more tools, not only will more locations open up to you, but you'll be able to backtrack through old ones to explore new areas. All of these secrets and details keep the game's already stunning world feeling alive, and adds to a more rich experience overall. All of the NPCs, rooms, collectables, etc. are wonderful to just get lost in, and considering the hearty amount of side quests it can be well worth your time to do that. 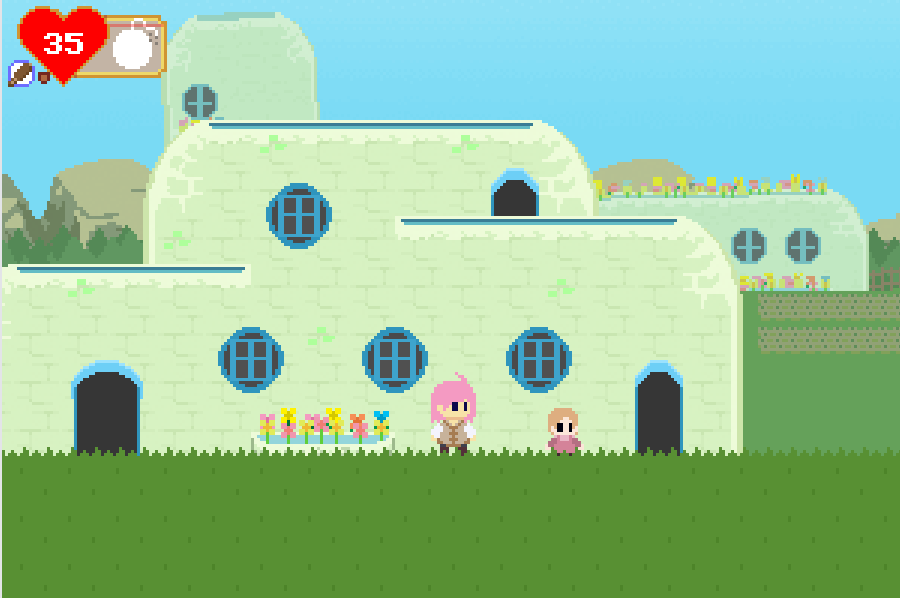 Mechanically, Phoenotopia is as solid as a rock. Running and jumping is well paced, and for the most part very smooth and easy to get a grip on. It's not often I've had a problem with the platforming. Jumping nimbly around enemies, hazards, or puzzles feels pretty satisfying when done gracefully enough. Varied terrain and challenges such as timed platforms, entire invisible rooms, and various types of enemies can make things more difficult for you. The only time it can be trouble is maybe when ladders are involved; ladder jumping sections can be a bit of a pain.

The combat starts very simple, with just melee and a bat. Then, as more and more tools are added to your belt, things get a bit more complicated. The slingshot is a good stunning tool, bombs are risky and a bit hard to pull off in a fight but always powerful, the spear packs a punch but takes a bit longer to recharge, and so on. It's very fun to explore all the different ways to deal with all the different enemies with different tools, and the techniques you develop are fun to try against other enemies in the future. The enemies are just as diverse as the ways you have to deal with them. There's everything from frogs, bandits, spiders, bats, guards, to stuff like killer robots, killer alien mercenaries, and killer harpies! Combat is fun, but combat is also difficult. You gain a lot of health over the course of this journey, but enemies can still kick you around if you're not careful. Unless you do early grinding and exploring, this game's difficulty curve is a steady, fair, but also very rough one. All of the combat is fair, with maybe a few time when I tried to hit stuff in midair, which is hard. 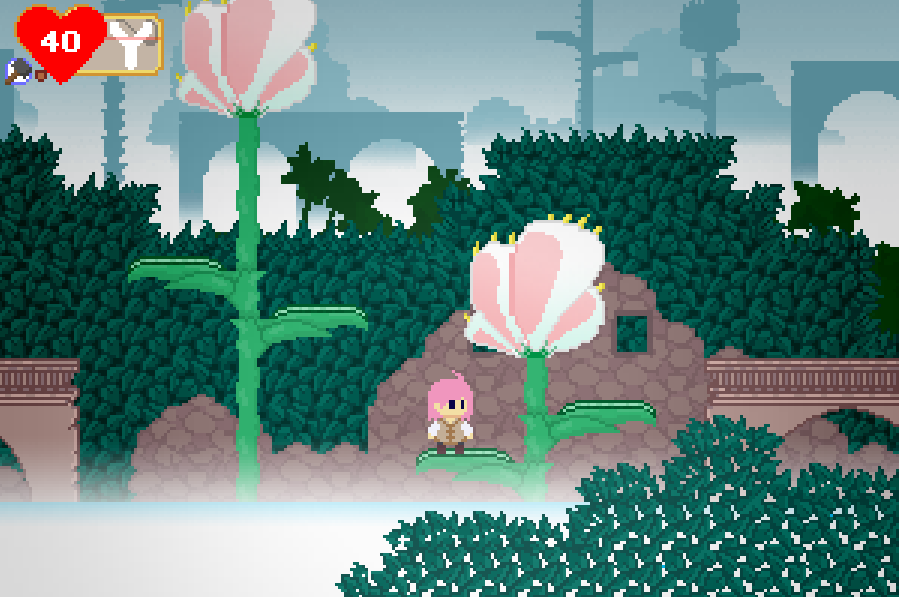 The puzzles are like I said earlier: ingenious. They can involve hitting or shooting switches, pushing boxes, or using tools a plenty. They can be real thinkers, I'll tell you that. They're fun and clever as hell, usually not stupidly hard or convoluted, but instead finely crafted and challenging. The puzzles are what really make you think about how you can use your tools. You can ricochet with the slingshot, use the spears as platforms, and even use one tool to illuminate otherwise invisible platforms. The bombs still just kinda blow stuff up.

After all I've said so far, do I really have to go into the level design? It's good. As hell. In every way. 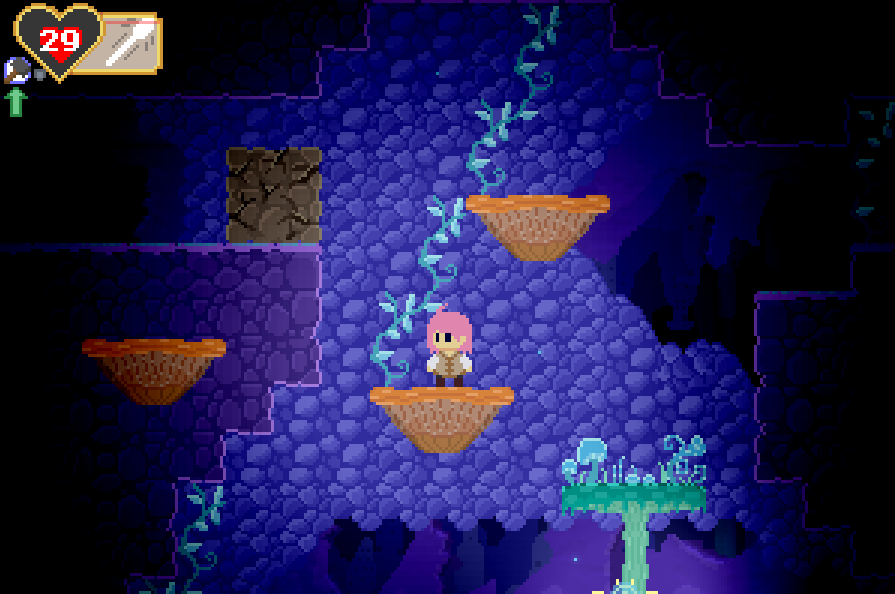 The aesthetic design is beautiful, outstanding, and simply breath-taking. The art is a retro/pixelated art style that I can't help but simply adore. It's very similar to Treasure Adventure Game's, which is always a good comparison. Everything is so vibrant and colorful, and the variety in levels leads to a variety in color palette. It's an astoundingly beautiful game sometimes, really nailing that retro vibe yet still feeling wholly its own. Not a moment went by where I considered the pixelated style anything other than original and polished. The animations are smooth, even without having so many frames that it doesn't fit the retro style. The locations go from looking lovely to heart warming to creepy to epic, the one thing they have in common being that they all look damn good.

Phoenotopia's music design is simply put, other worldly. The superb mix between real instruments and chip-tune/synth is nothing short of perfectly done. The pianos, the guitars, the flutes, the beeps, the boops. All amazing. The range of emotions that they deliver is just as vast as the visual's. It can be heart-meltingly heartwarming, or maybe creepily ambient, or probably excitingly quick, or almost magically fantastical. It's an impressive twenty-eight track OST that I listened to on repeat while writing this review. Let's just say these songs don't get old quickly. Sound effects are also really well done, being actually satisfying and pleasant to listen to. Bombs sound like bombs, spears sound like spears, walking sounds like walking, and dying sounds like breaking glass for some reason. 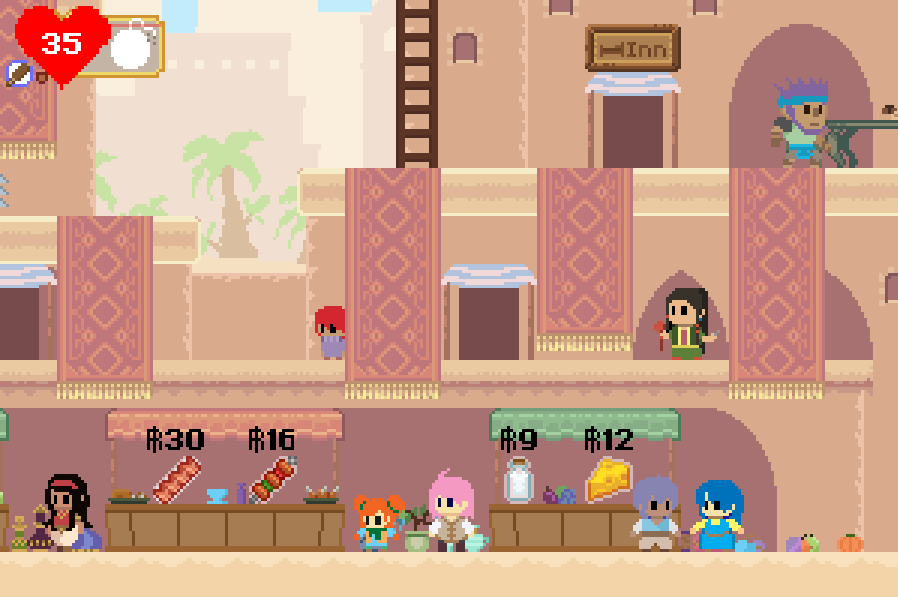 Phoenotopia is a wonderfully crafted game, full of heart and adventure. It's damn near a masterpiece, with maybe only a few minor flaws and an ending that doesn't really resolve the plot. The world, the gameplay, the story, the aesthetics, the characters, the variety, and just about everything else is down-right remarkable. As you can tell, I have really nothing but praises for this game. I dumped a solid eighteen hours, twenty-four minutes, and fifty-four seconds into just one play through, and I loved just about every moment of it. It's easily my favorite flash game (sorry Pause Ahead), and up there as an all time favorite game ever. Hopefully Phoenotopia 2 is just as good, if not better.