So I'm still making that game. I even named it Aftermath.

So... it's been a while. I haven't really been doing any of the blogging. Mostly because I don't have time, and really there's nothing that I want to say that you lot haven't already so... thanks. Most of my time has been ate up by my attempt at making a vidja garme. Some of you were kind enough to have tested it for me back in like June or something. TBH I never thought I'd even get this far but I did. I tend to lack the focus and lose interest in projects quickly and just move on to the next. However recently I think I've realized that making games is something I really want to pursue. Even if I can never make it my job. Although that'd be the dream. So, In order to make that happen I need to start completing games. So here I am. Having my game in a pretty far along state. I'm 6 levels deep out of 8. I still need cutscenes ( Ninja Gaiden style bay-beh), there's barely any music and to be honest visually and gameplay wise the game is far from polished. I mean the game is good and more than playable but it's no where near where I want it.

I think that alot of what's keep me around this project so long is that I think this game can actually go somewhere. My art and animation sklls have far surpassed what I was capable of only a couple of years ago. Atop of that my scripting has gotten better as well. The latter is important as well because I tend to give up after my game expirences a gamebreaking glitch. Damn you Glitch Gremlin! 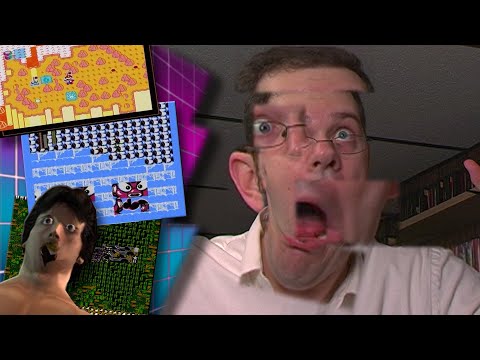 However I really haven't had any issues and when issues did pop up, I've been able to force myself through them. I've also learned that sometimes you just need to step away and come back another day.

Anyways, let's move on to the interesting part of this blog and talk about the game itself. Essentially Aftermath is a NES styled 2D platformer wherein you play as a dog trying to rescue its owner from the hands of some neir-do-well kidnappers, meanwhile having to fend off goons, henchmen, and some abominations left over from the apocolypse.

January 1st, 2000 all of the world's computers ceased to operate. This event is known as Y2K. As a result banking operations were shutdown, electrical power grids also ceased operations. The world quickly spiraled into chaos. A nuclear explosion was set off within The White House, another in The pentagon, and one within the heart of Washington DC. The nation's leaders were destroyed and with it the politcal stability of the United States. The nation quickly began forming sides and a civil war broke out as nobody could agree on how and who should lead the country. Other countries and political groups began forming alliances with the numerous sides of the civil war. Soon this caused the Third World War. The war was long and bloody lasting about 8 years. Eventually sides began to use nuclear warfare inorder to save the lives of their own people. This caused retalliation and nuclear warfare began. By the end of 2008 the Third World War ended. Following the Aftermath of the Third World War, The Earth Revival Project was created. The ERP would began attempt to heal those afflicted by the nuclear war and restore the enviroment. They quickly became the only form of order and goverment in the world. The ERP was able to develop a cure of the radiation. They released it in the air, and water sources, throughout the world. It worked well, however shortly after side-effects began to arise in some humans, plants, and animals. As it turned out the ERP had rushed the cure, without properly testing it. Monstrosities were created. The ERP's only option was to bomb the creatures into oblivion. However they were not completely successful. In fact many of the creatures survived. The people turned on the ERP and yet again the world was on the brink of war. However quickly and mysteriously the ERP disbanded, leaving no trace of where they went. Afterwards the people of the world was left to fend for themselves. Humanity enjoyed peace briefly. However Raiders, highwaymen, and other criminals began to terrorized many in an attempt to survive in a world still recouping from near extinction. Slowly Feudal style kingdoms began popping up across the world, in an attempt to find safety from those looking to do harm.

It is now the year 2102 and you are a dog. Your owner is a Medical Doctor. On a scavanging trip in an attempt to create much needed medicine, She is kidnapped while you are asleep. When you awake all you are left with is the trace scent of your master. You must track her down and save her! 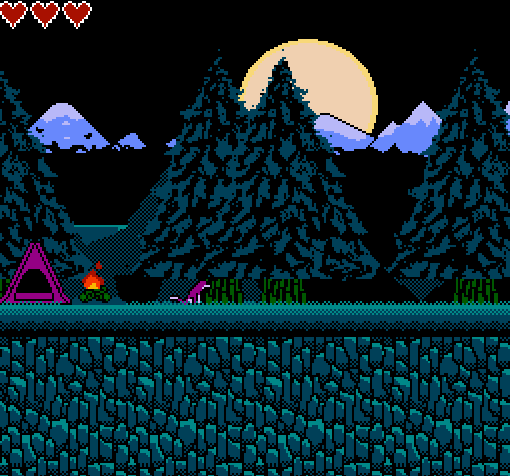 The game's mechanics are simple. You got a jump. You got a bite attack. You got a slashing air attack. An a quick back-step. Using these moves you'll need to navagate your way past those standing inbetween you and your master. Like this Douche. Eye hate these guys! 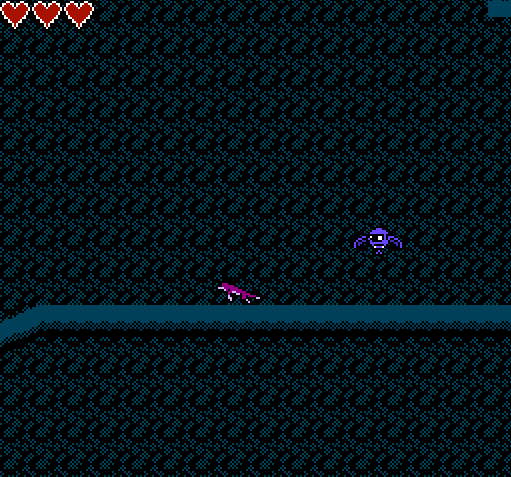 Sometimes it's tough Juggling the balance of difficulty on a boss! 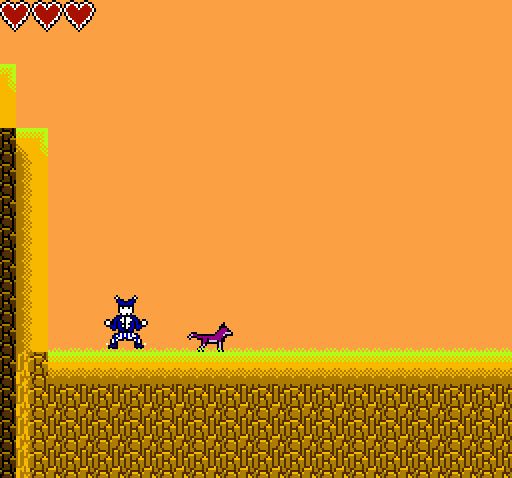 That Man's going to get a knife tan standing shirtless in the sun! 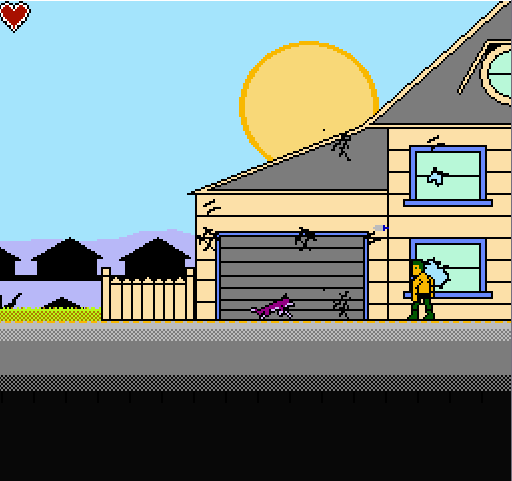 This guy likes to throw Grenades. Didn't their mother ever teach them that it's impolite to throw grenades at people?! TOSSer! 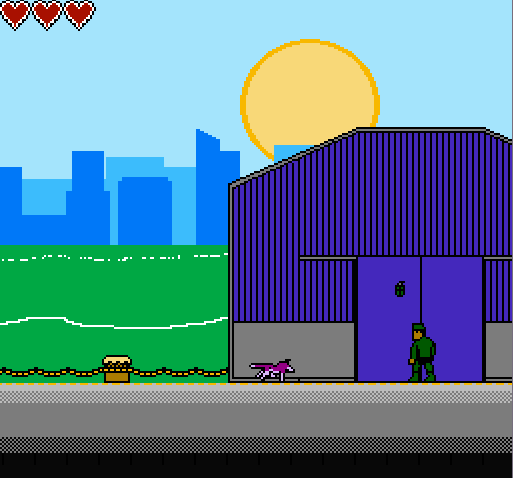 Watch out for these karate wielding giant rat people! The Ratman were chased into the sewer and subway after the ERP tried to bomb them out of existance. Ratman have feelings too :(

It's hard to squeek in a pun on this one. 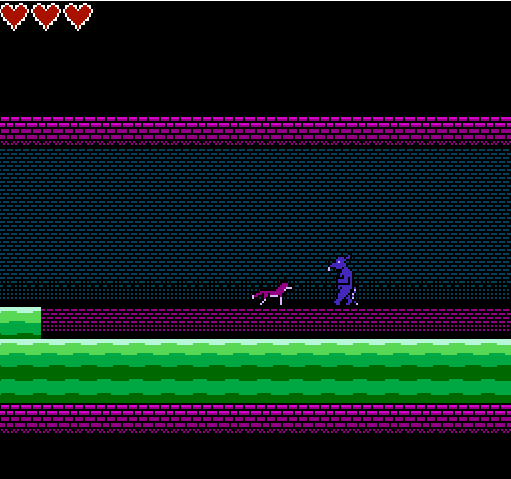 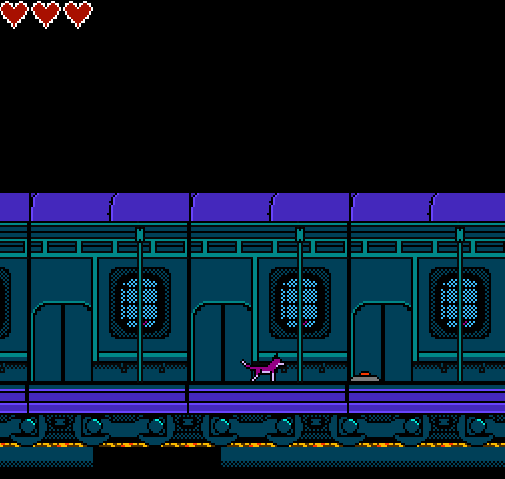 Didja.... didja get it? Cause you're not laughing and that was a pretty funny joke...

The game currently has full controller support. Remappable buttons and keys. Parallex scrolling. Lots of bosses. A bunch of Deplorables... and Save/checkpoint system also some secrets. However like I said the game is far from done and also some of the background images are jank and really just kinda place holders. Anyways the game will be pretty cut and dry. No perks, or levels or any of those post NES shenanigans. However the game will be very Fee to Pay to Win so break out your wallets muppets cause imma drain you dry! BWAHAHAHAHAHAHA!

All joking aside lemme know if you lovely people have any questions. Full disclosure I do not know where babies come from, so don't bother asking.