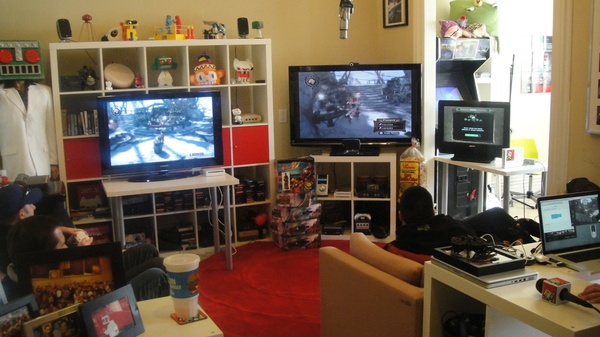 I have waited years for a proper turn-based Final Fantasy in the vein of the old classics from the series. It came as a surprise to me when this title was announced to be in that style and as soon as the demo was released I downloaded it and was pleasantly surprised. I did something I never do these days and pre-ordered the game. While I enjoyed the demo immensely, I found issues with the actual game itself, namely the dreadful story, pitiful voice acting and scriptwriting, and recurring laziness on the part of the game's designers/developers.

Although the game is turn-based like older iterations of the series there are certain differences that should be noted. The game very much takes inspiration from Pokémon with an onus on collecting as many of the enemies that you face as possible. There is a quirky mechanic implemented that requires you to attack enemies in a certain way before they can be captured and added to your party. Examples include attacking an enemy with fire, dealing a critical hit, or defeating all other enemies in the field before an opportunity to 'imprism' the last survivor arises.

There are two different ways to utilise your collected monsters: using Jiant form where your character is a full-sized human and can stack two monsters on their head or using Lilikin form where your character is in a cuter chibi representation mounted on a larger beast with a smaller one placed on their noggin. Monsters come in S, M or L size which dictates where they can be placed in your stack. You can also unstack your characters and have them fight on their own but I found very little use for this as unstacked monsters will likely be killed in one hit throughout much of the game unless facing off against much weaker foes.

Collected monsters can be levelled up by defeating foes and skills can be unlocked from a skill tree which is reminiscent of the Sphere Grid from FFX in simplified form. Completing these skill trees allows you to transform monsters to alter their position in the stack and increase the number of abilities available in the attack command menus. Once a form is unlocked, you can freely change between monster iterations and by finishing a monster's skill tree entirely a powerful skill boost can be applied to the character. Despite the giant amount of monsters available to capture and nurture, I found myself sticking with a small number of stacks which I barely changed throughout the game. The reason behind this decision rested solely with the game's combat system.

The battles, whilst being undeniably satisfying and nostalgic, were almost invariably easy. I found the majority of battles could be bested in two turns or less once you unlock magic spells that hit all enemies in one go. Once you find a stack that works for you, you will become comfortable with it and be reluctant to change unless you come up against an enemy which matches your current element (for example, if you have a fire stack and come up against a powerful fire based enemy that absorbs fire attacks). Once you level up a stack enough you will find most encounters become pushovers. The easiness of the combat is proven by the fact that I didn't die once during the game until I encountered the final boss who, compared to every other foe I encountered beforehand, was massively overpowered and required some grinding to strengthen my characters.

If the game had had a well developed story it would, for me, have been pushing for a much higher rating. Unfortunately, the script-writing in World of Final Fantasy is so abysmal that it seriously impacted my enjoyment of the game. Even bearing in mind the fact that the title is aimed primarily at younger audiences, some of the plot developments and exchanges between characters are frankly embarrassing. The story, for what it is worth, follows two siblings, Lann (who is irritatingly dense throughout) and Reynn (who is involved in one of the most cringey scenes in the game with the cactuar conductor), who suddenly get amnesia and set off to Grymoire, a mystical land drawing together famous FF characters, to rediscover their pasts. There follows at least 40 hours of solid gameplay spliced with terrible, drawn out story scenes where the brother and sister interminably waffle on about having no idea what is going on. Even at the endgame we are pretty much none the wiser and are forced to surmise that the yarn spun out solely to draw together all the characters from the previous titles in the FF series is pathetically weak - there is literally nothing to it whatsoever.

The voice acting is also unforgivably poor for the most part – you would think a company as big as SquareEnix would be able to find a cast who could do at least a passable job in English, but no – and I draw your attention to the totally insipid performance of the Girl with no Name especially as hard evidence of the woeful performances of the English cast. As you walk around maps you are forced to listen to inane babbling between the characters which, if interrupted by battles or actions such as opening chests, will immediately restart afterwards. This can lead to listening to the exact same annoying passage over and over again. When these conversations involve Tama with her infuriating and baffling misuse of the word 'the' and Lann's continual use of the word 'honk' in place of curse words you will have to resist the urge to pull your hair out. Muting the sound is not really an option as it will mean missing out on some lovely background music, including both original tracks (Plaza 99's tune is especially fantastic) and reworkings of past Final Fantasy ditties. Do yourself a favour and download the Japanese voice pack that has since been made available to avoid the constant irritation and cringeworthiness of the English voices.

There are other issues which also detracted from my enjoyment of the game. Dungeon and town maps are wholly uninspiring, absolutely tiny, and extremely linear. Certain sections in stages are exact copies of areas you have already passed through which can lead to some confusion in the few more complicated areas and a sense of boredom and deja vu as you progress through them. The menu screens used to upgrade monster stats and access skill trees are extremely slow as the developers insist on loading character models with each one. This can lead to delays of a second or two when scrolling between captured monsters. This might not seem much but it adds up when you factor in how often you have to use these screens to power up your characters. Another negative against the game, for me at least, is the lack of CG cutscenes which have long been a hallmark of the Final Fantasy series. Instead of the bombastic videos with high production values we are used to from previous games we are offered shoddily drawn anime cutscenes which, to me at least, completely lack any impact and felt totally out of place. Rather than add these anime segments, I personally feel the scenes would have been better rendered through the vastly superior in-game engine to avoid the occasional, jarring transitions that these scenes introduce.

Overall, I had a lot of fun with World of Final Fantasy. However, in a number of areas it fell short and some of the design decisions within seemed lazy and certainly detracted from my enjoyment of the game. In an RPG the story should be strong enough to warrant a 40 hour plus journey but here the narrative is so weak and sparsely developed that it sometimes has you wondering why you are even bothering. There is a lot to do in the game with side stories available from the Girl with no Name's tearoom, tough battles at the Coliseum, additional challenge dungeons unlocked after completing the 'story' and a wide array of monsters to collect even if, come the end of the game, you are just capturing rehashed baddies with slightly altered colour palettes. Fans of Final Fantasy will encounter some nostalgic favourites that will get them feeling all warm and fuzzy inside (Cloud, Sepiroth, Tidus and many others make an appearance as summon characters called Champions and recurring enemies such as Marlboro and Magitek Armour can be ridden around the map) but these feelings of nostalgia can be damaged somewhat by the horribly derivative and generic script which often serves only to damage character development forged in previous games.

To summarise, fans of old school, turn-based Final Fantasy games will definitely find something to love in World of Final Fantasy, either from the combat or the fleeting cameos of much loved characters and locales. New arrivals to the series might find less to get excited about. If, however, you come into this game with high hopes of a strong and engaging storyline be warned: you will very likely leave feeling disappointed and short-changed.

QUICK PROS
+ Proper turn-based combat finally makes a return to Final Fantasy!
+ Cameos from your favourite FF characters
+ Nicely presented graphics
+ Some nostalgic tunes make a reappearance – keep an ear out for them all!